“He was going to turn me into something inhuman!”

Friday’s cliffhanger was kind of a game changer — Maggie broke free from the hypnotic trance she’d been in, and tried to drive a stake into the vampire’s heart. But it was too late; he woke up.

Now Maggie’s standing there with a stake in her hand, and what are you going to say at that point? I think you might have dropped this, I was just giving it back? It’s not easy to pull that off.

Barnabas has no time for that kind of foolishness.

He advances on his betrothed, with a flourish of sarcastic Fridspeak. “What were you doing with this tool? Be careful, it’s very sharp. I wouldn’t want you to hurt anyone.”

That is so great. “Trying to hurt one.” I don’t know what it is about the Fridspeak that makes Barnabas more scary, but somehow it works. It must be magic. 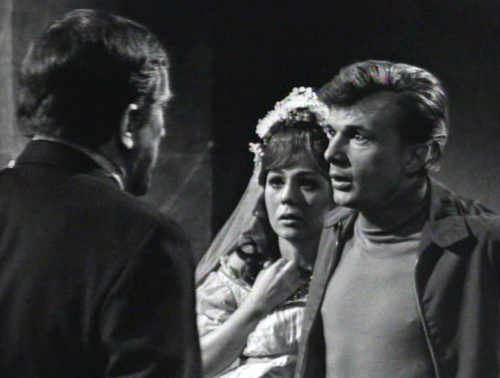 Then there’s a really nice moment — Willie steps in front of Maggie, and says, “I can’t let you kill her! If you kill her, you’ll have to kill me too!”

And how amazing is that? Willie has basically become the Jiminy Cricket of the show, standing in for Barnabas’ conscience.

The scene builds to a standoff — and then gets interrupted by a knock at the door upstairs.

Unfortunately, it turns out to be dreamy governess Victoria Winters, who is basically doused in plot repellent these days. And you’ll never guess why she stopped by.

Vicki:  Mrs. Stoddard sent me down with a message. The sheriff was up at the house a little while ago. He’s put a curfew on the town.

Vicki:  Yes. No one’s allowed to go out alone at night, especially women.

But, Vicki — you’re a woman, and you’re out alone at night. If Barnabas is awake, then that means it’s night right now.

Barnabas:  Because of the women who were attacked?

Vicki:  Yes, and because of Maggie Evans. I think the curfew’s a good idea. I know that I don’t like to go out alone at night.

I mean, is it me? This girl drives me crazy.

Barnabas:  Poor Miss Evans. I didn’t know her very well, but she was a lovely girl.

Vicki:  Everyone uses the past tense when they talk about her. I hope she isn’t dead.

Barnabas:  So do I, but we must be realistic. If she were still alive, surely the police would have found her by this time.

Vicki:  Unless she’s being held by the madman who’s done all these terrible things.

Fine, Barnabas says, but only in his mind. Damn. Why did you even come over if you’re going to argue with everything I say?

And then something truly terrible happens.

Vicki notices Josette’s music box on the table, and Barnabas plays it for her. She’s enchanted, saying, “It reminds me of the past. Of a long, long time ago.”

It reminds you of the past? Seriously?

And I’m sorry to break it to you this way, but this is how they’re going to set up the next story. Maggie’s run as substitute-Josette is going to end pretty soon, and Vicki will be the new object of Barnabas’ attention.

That’s kind of a mini-spoiler, but this foreshadowing is so obvious that it might as well be fiveshadowing. 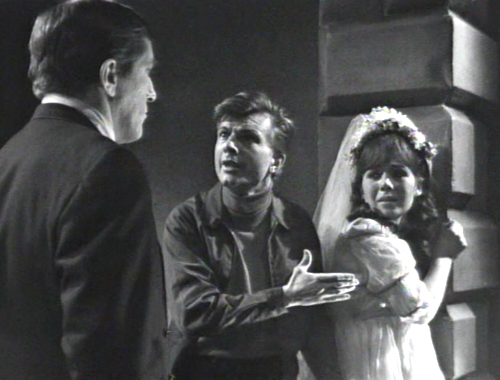 Back downstairs, Barnabas issues some more threats, and Willie pleads for Maggie’s life. “Look at her! Look how beautiful she is!” He’s doing a hard sell.

So Barnabas decides what he’s going to do with Maggie. He grabs her, and drags her, struggling, over to another part of the basement… 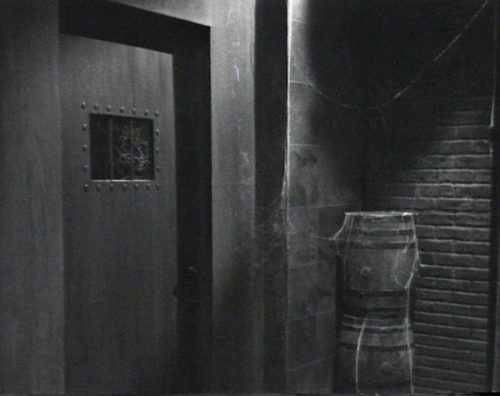 … where there’s a prison cell.

Seriously. It’s got a locked metal door with bars, and inside there’s a bed and a couple little tables.

It’s obviously old; it’s smothered in cobwebs. Apparently this house was constructed with a fully-functional prison cell in the basement. Who built this? 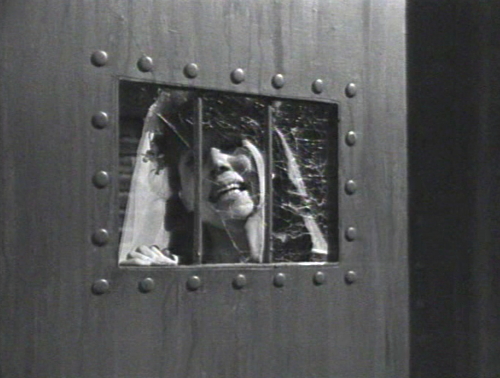 But, as I said, this is the episode where the writers are figuring out what they’re going to do with Maggie.

Head writer Ron Sproat wrote this episode; you may remember that we talked a couple weeks ago about Sproatnapping. A kidnapping story is his go-to plot device.

So this is a very Sproat decision: When in doubt, lock up the pretty girl, and leave her there for as long as you can. 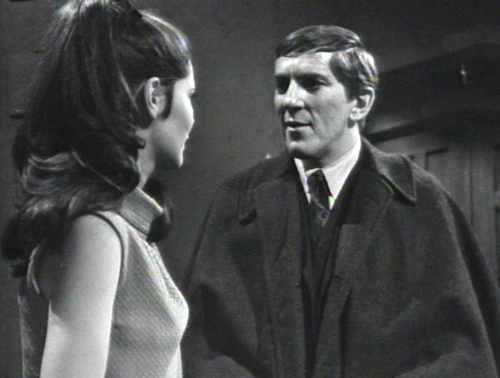 Once that’s out of the way, Barnabas finds an excuse to walk over to Collinwood and talk to Vicki some more.

He’s brought another family heirloom with him, and she coos over it, explaining that she never had a family; she was raised in an orphanage.

Barnabas says, “Well, no wonder you take such an interest in family heritage and the past.”

So, unfortunately, this is the episode when these two start using the phrase “the past”, as if it’s a single, specific thing. Here’s a sample:

Vicki:  I’m being too much of a romantic.

Barnabas:  Not at all. Not many young girls feel very happy about the past. And the past is very beautiful. Very beautiful.

What the hell are you two talking about? Jesus. 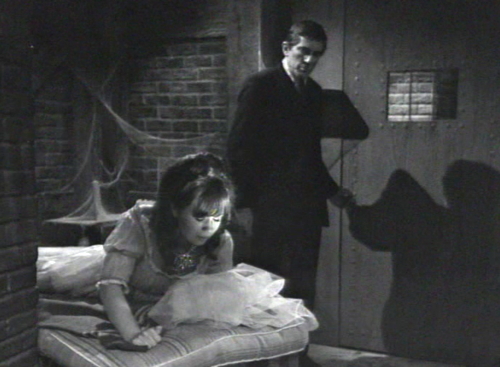 Okay, back to the prison cell, where Maggie is lying on her cot. She’s sobbing into the wedding veil, and she still has the diamond necklace on, which is fantastic.

Barnabas returns to her for some more lunatic vampire dialogue.

He says he’s going to keep her locked up here, until she begs to become his bride. Angry and stubborn, she snarls that she’ll never be Josette Collins.

Barnabas says, “Careful. I’m close to killing you tonight. Only your beauty saves you.”

She begs him not to leave her here; emotionally, Maggie is all over the map today. She says she’ll go crazy if she stays in this cell.

I love the Fridspeak. I honestly can not get enough of it. Fortunately for me, the producers feel the same way. And things get so much crazier.

Tomorrow: How to Ruin Your Life.

The first time Willie hears a knock at the door, they don’t do the knocking sound effect. They remember it for the second time.

Vicki finds the music box on a table in the foyer. In Friday’s episode, Maggie left it in Josette’s room upstairs.

Willie: You’ll have to kill me first.

Barnabas:  I might do just that. But unfortunately, I do not need you anymore.

This episode is missing the first 45 seconds after the theme, because there’s an announcer doing a recap of last week’s episodes. Several episodes were pre-empted last week in some parts of the country, so ABC could cover the United Nations hearings on the Vietnam War.

So we’ve got an announcer saying: “For those who have missed the last few episodes of Dark Shadows…” and that cuts out the first 45 seconds of the actual show.

We see the episode with the announcement on DVD and streaming, rather than the original uncut episode. This is one of the episodes where they lost the master tape, so the surviving episode is taken from a kinescope copy, filmed off a TV set as the show was airing.

They used to send these kinescope copies to local affiliates in areas where they aired Dark Shadows at a different time of the day. The kinescopes would be mailed out, and then run on the affiliate station a few days later.

There are so many things about this explanation that demonstrate the DIY state of daytime television in the late 60s. This used to be how television worked, just tin cans and string.

Tomorrow: How to Ruin Your Life.