“Thank you anyway, for whatever it is you were trying to tell me.”

Yesterday, Jason told Liz that they’re going to get married. You can tell that this is a dramatic situation, because there are a lot of follow-up questions.

Liz:  You can’t be serious. 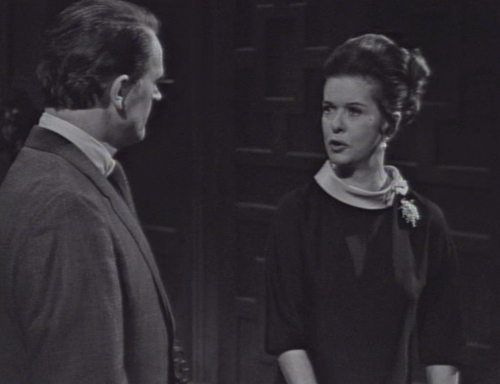 Now, this episode is interesting, because there are only three characters on the show today. (Obviously, I’m using the word “interesting” here in the “me/you fun gap” sense, because it’s really just a trivial production detail.) There are only five episodes like that in the whole series, and there’s another one next week.

So today’s episode is like a little self-contained play — a series of two-person scenes, going back and forth between the drawing room and the library. Everything is very heightened and intense.

Unfortunately, it’s just the blackmail story today, so if you only care about the supernatural stuff, then you can skip this episode and come back tomorrow.

If you haven’t been paying attention to the blackmail scenes, what’s going on is that Liz murdered her husband eighteen years ago. Jason helped her bury him in the basement, and they told everybody that he left the house and never came back. Now Jason’s come back after a long absence, and wants control of the Collins fortune.

The story today is basically a series of escalating dares between Liz and Jason, and it’s full of dialogue like this:

Liz:  The thought of getting married to you is inconceivable.

Liz:  Well, the most obvious reason that I can think of is that I detest you.

She refuses to marry him, so he hands her the phone and tells her to call the police and confess to Paul’s murder. Remarkably, she calls his bluff, dialing the sheriff’s number. It’s like a very slow and dramatic game of chicken.

Jason backs down first — taking the receiver and hanging up before the sheriff answers — but he’s got another weapon. Before she talks to the police, she needs to tell Carolyn.

So that’s pretty much how the rest of the episode plays out. Jason goes to fetch Carolyn, which doesn’t really make logical sense. There’s no reason why Liz has to stay in the drawing room, but we’ve only got three characters today and a lot of time to fill, so we might as well have a Jason/Carolyn scene.

Carolyn’s in the library, hanging out with the Ralston-Purina lamp. Jason asks her to come to the drawing room to talk to her mother, warning her that Liz is upset. This takes two minutes, which is about a minute and a half longer than it needs to be.

You know, I’m seriously having a hard time writing about this episode today. This might be the hardest one I’ve done so far. It’s not a bad episode, if you like the blackmail story. There’s nothing particularly interesting about it, but there’s nothing ridiculous to poke fun at. It’s an important character moment for Liz, setting her up to accept Jason’s marriage proposal in a few episodes.

So let’s just take a moment and enjoy the melodrama.

Liz:  Your father never loved you either.

Carolyn:  Mother, please don’t tell me anything like that.

Liz:  It’s true. He never wanted you. He thought children represented responsibility, and took away his freedom. He seldom even looked at you.

Liz:  He never held you in his arms!

Liz:  I don’t ever remember seeing him kiss you!

Carolyn:  Stop it, mother, I can’t listen to another word! 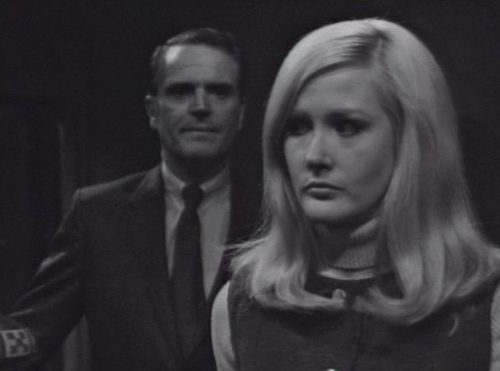 And that’s basically it. Carolyn rushes out of the drawing room before Liz can get to the point, and then she has another scene with Jason in the library. Jason goes back to the drawing room for a final conversation with Liz, and that about wraps it up. Come back tomorrow, we’ll have vampires.

As Jason leaves the drawing room to fetch Carolyn, he forgets his exit line and has to check the teleprompter.

Liz stumbles over a line during her conversation with Carolyn:

Liz:  I have to tell you about my life.

Carolyn:  Mother, you don’t have to tell me anything.

Liz:  Which will explain… why I’ve lived the way I have.