So here’s another totally normal thing that doctors do: show up at your door and ask for a blood sample. Yesterday, somebody broke into Dr. Woodard’s office and stole Maggie’s blood tests, so now he has nothing to do but go and see if anyone else has some spare blood lying around.

Woodard shows up at the Old House, and Willie recognizes him as the doctor who came to visit when he was sick last month. The doctor asks if he can examine Willie’s wounds again, and then casually drops, “Oh, and I’d also like to get a sample of your blood, for my records.”

For a doctor, Dave Woodard seems to have a lot of time on his hands; I can hardly get mine to call in a prescription refill.

Naturally, Willie says no and tries to shut the door, but Woodard literally pushes his way into the house and starts brandishing needles.

Willie protests that he didn’t call for a doctor. Woodard says, “Mr. Loomis, I’ve already been consulted,” which I guess means that he can show up anytime he feels like stocking up on bodily fluids. 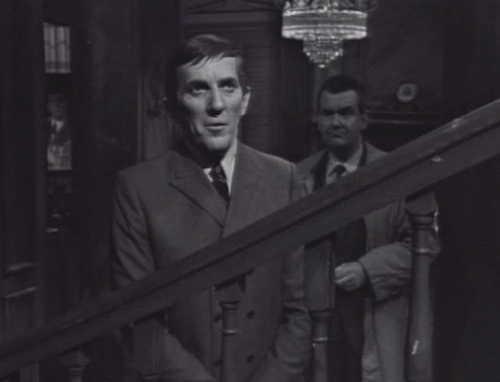 The sun sets, and Barnabas emerges from another room to find his houseboy in the drawing room, having a heated argument with the town doctor. Imagine waking up and dealing with that first thing in the morning. Kids today think that the vampire lifestyle is all glamour; it turns out there are drawbacks.

Willie appeals to Barnabas, asking if he can go to his room, which is kind of adorable. Barnabas agrees, and Willie makes a fast exit.

Barnabas tells Dr. Woodard, “I apologize for Willie. He’s the finest servant I ever had, but he tends to be nervous and upset.” Gee, I wonder why. Maybe we should try letting him keep his blood in his own body for a while, and see if that helps him to relax.

Frustrated, Woodard heads over to Collinwood. You can tell that it’s Wednesday, because they’re putting characters together who hardly know each other and have nothing to talk about.

They put in a good forty-five seconds of door acting before the scene can even start, including the following time-filling exchange:

Dr. Woodard:  I was wondering, is Mr. McGuire at home?

And then she just stands there and looks at him, like she has no idea what he’s driving at. 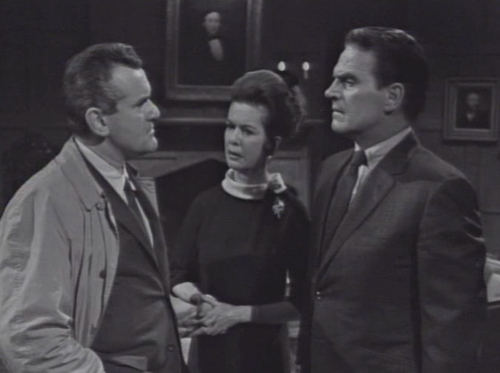 Eventually, everyone settles in for a nice three-handed recap, and Woodard describes Maggie’s mysterious condition in extraordinary detail. This is not technically ethical, but on a soap opera, the need to recap outweighs all other considerations.

This is the problem with the show right now: they’ve got the vampire storyline and the blackmail storyline, and the two plots have almost nothing to do with each other. Jason, Liz and Carolyn could fall into a well and disappear forever, with exactly zero impact on Barnabas, Maggie and Dr. Woodard, and vice versa.

For a long-form serialized narrative, the whole point is to have overlapping stories that bounce off each other in interesting ways. They haven’t quite figured out how to do that on Dark Shadows yet, so in this episode, we’re basically watching the two storylines visiting each other.

So obviously the next step is for Jason to go to the Old House, for another chilling two-minute answering the door sequence.

Barnabas and Jason stand around and discuss the Willie/Woodard encounter all over again; the whole episode is dueling recaps.

At one point, Barnabas tells Jason, “Willie’s been a very faithful servant to me, the best I ever had.” He said practically the same thing to Dr. Woodard a few scenes ago. It’s not surprising if he’s losing his place in the script, because it’s all going in circles today anyway.

But then, out of nowhere and at the very last second, they get to an actual plot point — Jason tells Liz that he thinks they should get married.

I wonder if they’ll need to get a blood test first? I know a certain doctor with a needle and some free time.