“Vicki… could it have been one of those things you think you saw?”

It’s been exactly a month since Willie opened the coffin, and it’s started to sink in for the producers and writers that they might want to keep the vampire around for a while.

Originally, the plan was for Barnabas to be on the show for six weeks. Dr. Woodard, the Van Helsing substitute that they’ve recently introduced, would find something nasty in Maggie’s blood samples, lead the townspeople to Barnabas’ door with torches and stakes, and put an end to the whole silly mess.

But now the first trickle of fan mail has started to arrive. This is a new experience for the Dark Shadows team. Nobody’s writing in to say how much they love the Jason/Liz blackmail story, but the dead guy is getting some response. They should keep this storyline going.

The writers have figured out a really good plot point for Friday’s cliffhanger. Now they only have two problems. They’re called Wednesday and Thursday. 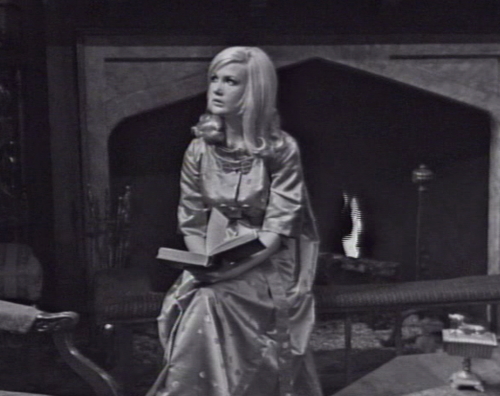 So that’s my defense for the next couple episodes, which are unbelievably stationary pieces of television. You could easily skip the next two episodes, and go straight to Friday, without missing a thing.

That’s a hint, by the way. Seriously. Feel free.

You can tell that this is a filler episode right from the start, because they do a two and a half minute reprise of Maggie and Vicki talking about the thunderstorm, which wasn’t very interesting when we saw it yesterday. Two and a half minutes is incredibly long for a “previously”, even on Dark Shadows, and it doesn’t even lead to anything. After the opening titles, Vicki comes back to Collinwood, apparently leaving Maggie to fend for herself. 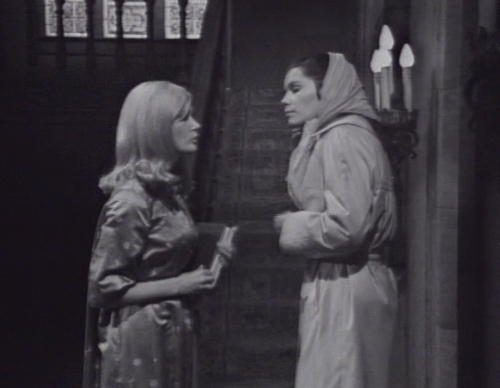 Vicki returns from her visit with Maggie. She’s completely dry, but at least she pretends to shake off her coat and scarf, and hangs them on the wooden bannister so it can get make-believe water damage. Carolyn even says, “You’re drenched.” This is an obvious fabrication.

Then Carolyn stands around and talks about getting spooked by the storm. Dude, you live in Maine. Sometimes it rains.

They sit by the fireplace, and Vicki tells Carolyn all about sitting with Maggie and seeing a man’s silhouette in the lightning, even though we just spent two and half minutes watching the scene. Then she goes on about the storm as if it’s her first time encountering moisture.

Vicki:  The lightning seems to be much more powerful than it’s ever been. When I was driving home, the flashes of it lighted up the countryside in a way that made it all seem so strange. Everything familiar was so unreal.

This is what Dark Shadows was like before they had monsters — pretty girls sitting in the dark, talking about the weather.

Vicki’s story about the lightning suggests that Barnabas has actually caused the storm to happen, using some magical weather voodoo that he never uses again because it turns out that rain isn’t that dramatically compelling.

And then who should show up but Barnabas himself, come for a friendly visit, and he’s not wet either. I thought he was using the storm as cover to get at Maggie again, but it seems like he got his signals crossed and followed the wrong girl home.

Anyway, now that he’s come all this way, he might as well strike a dramatic pose and tell them the story of a girl who commits suicide by jumping off a cliff. It’s a long monologue for Jonathan Frid to remember, so he positions himself facing the teleprompter and pretends that he’s looking off moodily into the distance.

He begins, “There was a night such as this,” and then it goes on, for minutes and minutes. Key phrases include: “a young, beautiful woman was pressed to the limits”, “the one place on earth that seemed to be designed for the termination of life”, “her clothing was torn by the low branches”, and “she broke free and hurled herself off the cliff.”

Let’s fast forward to the end: “He found her body broken, lifeless… bloodless. As violent as her death was, the expression on her face was one of serenity. As if this were the best possible ending to her life.”

Carolyn finally stops him and says she doesn’t want to hear any more. What on earth must they think of him? Who comes over in the middle of the night to swap suicide stories? 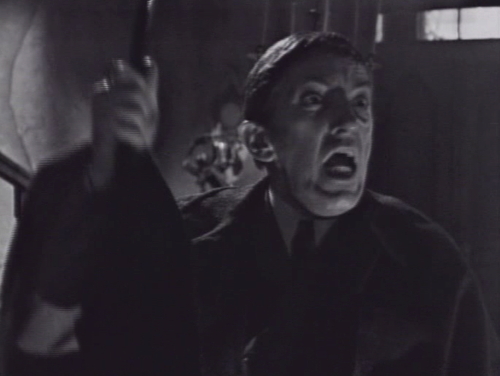 Once that blows over, Jason wanders in and tells Barnabas his suspicions about Willie and the cemetery. Barnabas isn’t pleased to learn that Willie’s still drawing suspicious attention to the Old House.

Barnabas goes home, and we get a nice long pan through the Old House to give Barnabas time to hurry over from the Collinwood set.

He enters the house, waves his cane in the air, and bellows “WILLIE!!” Which you have to admit is a charmingly lunatic way to end an episode.

The first few notes of the theme song are skipped, and a dark line blinks in and out above each word.

When Carolyn and Vicki are in the drawing room in act 1, Carolyn says that the lightning is “louder, and angry.” Then the lights cut out, and she’s startled: “What’s that?” Unfortunately, the lights go out a moment too soon, so she finishes her line, and then acts startled.

As Carolyn and Vicki are lighting candles, there’s a clatter just offscreen; something metallic is scraped across the floor. Both actresses smile at whatever just happened in the studio.

As Jonathan Frid walks through the drawing room, the camera jerks up and you can see the top of the set.