“I’ve been insane for years! I just became sane, just a short time ago!”

Gabriel Collins is a new visitor to the mountains of madness, thanks to a recent half-hour soujourn in a Lovecraftian 4D immersive escape room that he has only recently escaped from. They say that whatever doesn’t kill you makes you stronger, but apparently there are exceptions; Gabriel hasn’t managed to murder any of the three people he’s tried to extinguish tonight. And now that I think about it, not being killed by Gabriel has probably made Kendrick, Daphne and Morgan stronger, which means he’s even farther behind.

But he’s still in the game, and he’s currently lurking behind a tree with his knife, waiting for an unsuspecting victim to walk by. And here comes Kendrick, tromping through the woods en route to the police to report his recent brush with that very knife.

As Kendrick passes by, Gabriel grips the knife tightly in his fist, raising his weapon and preparing to strike.

But then he takes a look at himself, out in the woods, attempting murder for the fourth time today. In a moment of clarity, he looks at the knife, and asks, “What am I doing?” It’s the portrait of a man suddenly going stark raving sane.

It’s an opportune moment for self-reflection, because this episode is a bittersweet milestone for Dark Shadows — the next to last episode written by Sam Hall, the writer who saved the show back in 1967. Sam’s being pulled off the two-man writing staff so that he can concentrate on the script for Dan Curtis’ next feature film, Night of Dark Shadows. The final script’s due in less than a month, and to be honest it’s not going that well so far, so it’s probably a good idea for Sam to only have one incoherent storyline to struggle with, instead of two.

Sam will be back to write the final episode at 1245, but his co-scripter, Gordon Russell, is now tasked with writing the next 27 episodes solo, essentially locked in his room with a typewriter and a television show that has gone irreparably insane.

In happier days, there were three writers working together on Dark Shadows, reaching a peak of excellence from April 1969 to April 1970, when Sam and Gordon were joined by Violet Welles. That included pretty much all of the 1897 storyline, the Leviathan story and the beginning of 1970 Parallel Time. Things got a bit sticky starting at the very end of 1897 because Sam and Gordon were busy writing the script for House of Dark Shadows, so the Leviathan story didn’t turn out as well as they’d hoped, but that was the golden year of the show, the one time that the writing team was united, and all pulling in the same direction.

When Violet left in April, she was replaced by Joe Caldwell, another good writer who’d done a previous tour of duty on Dark Shadows back in 1967. That got them through Parallel Time and into 1995, and then the disappointing 1970 lead-up to the next time travel sequence.

Caldwell left the show in September 1970, and at that point, it was decided that Sam and Gordon could handle the entire show by themselves. This did not really turn out to be the case, and during the 1840 story, you could watch the show quietly running out of steam in real time.

Churning out a soap opera script five days a week is grueling, and modern soaps usually have more than a dozen people on the writing team, which includes a head writer working on the high-level storyline, a team of people doing the episode breakdowns, and junior writers who script the actual episodes. Writing five scripts a week for a high-concept soap opera like Dark Shadows is an insane amount of work for three people, and then two people, and as of tomorrow, it’s just Gordon.

So, hands up everyone who thinks that it’s an accident that Sam’s next to last script involves people desperately trying to get away from a dangerous madman who wants to destroy them.

“One death isn’t enough, Mr. Young!” Gabriel rants. “There have to be more! Indeed, there’s so much death in this house, and there has to be death!” That sure sounds like a story conference with Dan Curtis to me. You can try to explain to him that you can’t just kill all of the characters and expect to make it through the next five weeks of story, but he doesn’t care. He likes it this way.

So it turns into an actually rather thrilling fight sequence, which they don’t do very often, with Kendrick tumbling around and kicking the knife out of Gabriel’s hand. This is what the show needs right now, more knife fights. I’d like to see Catherine and Daphne spend less time talking, and more time trying to settle their differences with cutlery.

It doesn’t last, of course; nothing truly beautiful ever does, and as Sam has discovered, the madman always wins in the end. After several tussles and a final close-quarters clinch, Gabriel delivers a blow that drops Kendrick to the floor, stabbing him in the shoulder.

Luckily, John Karlen characters appear to be fairly resistant to wounds in the upper left torso, so don’t worry; you can let him rest for a minute and he’ll be fine. This may be the result of built-up scar tissue from when he got shot by the police, back in ’67. I guess it does make you stronger, after all.

Scurrying through the underbrush behind the secret panel, Gabriel happens upon an unlocked door to a chamber that it’s pretty amazing nobody’s ever discovered before. It appears to be right off the main road, not far from the drawing room. Somebody’s set up a little private clubhouse here, with a piano and everything. There are a ton of lit candles too, so presumably someone has been here recently, or at the very least, they’re still paying the electric bill. How did we not know about this awesome man cave hidden behind the walls?

Hanging unsteadily on the paneling is a portrait of Brutus Collins, the author of all our sorrows, which stirs Gabriel up to a considerable degree.

“Brutus Collins,” he groans. “So you’re here! You’re in another part of the house… but you’re here!” I have no idea what that line was supposed to be, before Gabriel got at it. That may have been the moment when Sam just gave up completely, and just typed some words. I know how that feels.

“Brutus Collins,” Gabriel repeats. “He’s the one responsible for the locked room, and the lottery!” So I guess the roles have switched, and now Gabriel is the stand-in for the writer, and “Brutus” the executive producer, who insisted on this timewaster of a storyline. 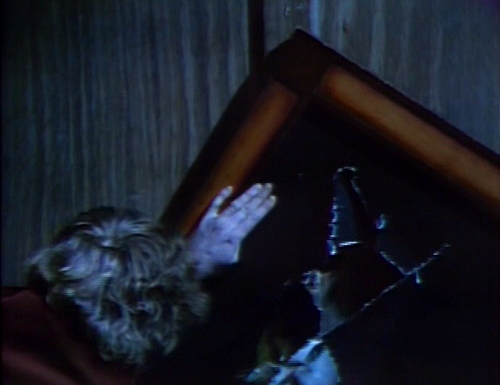 Yeah, that’s pretty much the writer/producer relationship, right there. It’s probably best if we let Sam work out whatever he needs to.

Still not satisfied, Gabriel takes the next obvious step: lighting a torch off one of the candles, and just burning down the show, like we always knew he would. I figured that would happen five weeks from now, but this is where Sam is, emotionally, and I can’t say that I blame him. 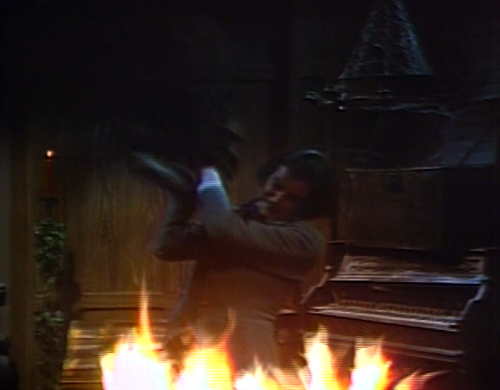 Naturally, Morgan comes in and ruins everything, just as we’ve got a nice blaze going. He starts beating on the fire with a spare carpet, as Gabriel heads out the door, and locks it behind him.

Now, this is a very exciting moment in the story — Morgan trapped in a tiny, windowless room that’s quickly filling up with smoke from a raging fire. He’s clearly just a few seconds away from being overcome by smoke inhalation, and if we plan on using Morgan in any future episodes, then someone needs to come to his rescue immediately. This is some grade-A melodrama material, if we can get people excited about it. 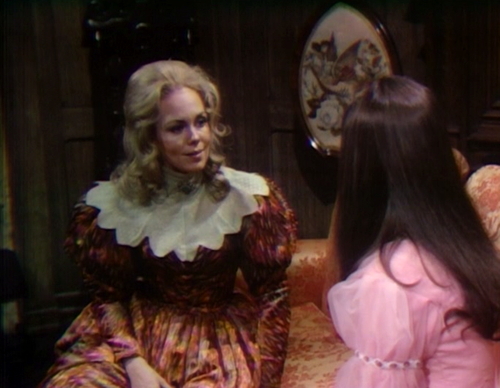 So then they cut to a quiet chat between Catherine and Daphne, who briefly discuss Morgan’s hunt for Gabriel, before slipping back into their typical quarrel over Bramwell’s romantic future. This goes on for six minutes plus a commercial break, before Catherine realizes that Morgan might need help. 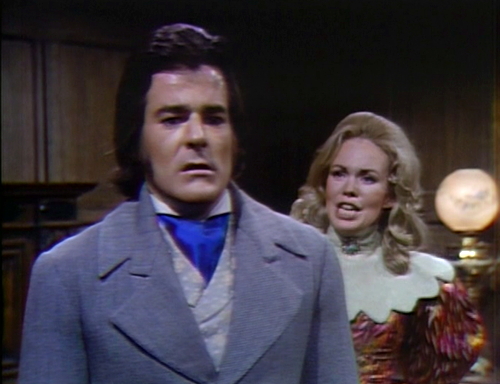 And the next time we see Morgan, he’s totally fine. He’s just standing around in the drawing room like always, with no explanation for how he got out of the burning room. He’s having another grumpy discussion with Catherine on the subject of how they all feel about Bramwell, and it’s just the same as any other episode, these days.

So that’s a baffling writing choice, if you ask me. Sam just created an exciting, stressful situation, which would have given them some new things to do and talk about. Instead, they skip past the rescue, and act like it never happened. Catherine mentions Gabriel trying to burn the house down, but that passes by with no further comment.

Now they’re talking about Bramwell, and the lottery, and the locked room, and the stuff they’re always squabbling about. This is what’s really smothering them — not the smoke and the fire, not the death and the sickness. It’s the commitment to this irritating storyline that just isn’t getting any better, and now Gordon has to fight through the next twenty-seven episodes on his own. 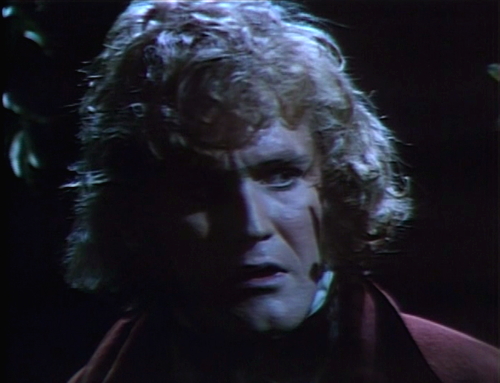 “What am I doing?” Gabriel asks, shaking his head in disbelief. And then he goes and works on the script for Night of Dark Shadows, and dreams of freedom.

The pen is hidden under a rock on the beach.

This is confirmed; have your recovery team ready.

You can see a big scratch on the secret panel when Gabriel opens the door in the teaser.

When Gabriel and Kendrick are fighting, the camera cuts to Morgan, waiting for his cue to start walking down the stairs.

After Morgan walks away from the locked drawing room doors, Gabriel lunges at Kendrick and smacks against the door, which opens slightly.

When Gabriel is in the secret passage and opens a squeaky door, someone coughs in the studio.

When Catherine asks Daphne where she’s going, there are some footsteps in the studio, and someone coughs again.

Catherine tells Daphne, “I told you that I don’t want you there with him, taking care of him!”

This isn’t really a blooper, but it’s odd that they didn’t show us the scene of Catherine finding Morgan in the secret room, and helping him to escape. The next time we see them, they’re just standing in the drawing room.

Catherine sneers at Morgan, “You Collinses always have a very good alibi, don’t you? Whenever anything — any of you does anything wrong, you always blame it on the locked room!” That’s not what alibi means.

When the scene fades to Daphne waiting at the Old House, there’s some high-pitched studio chatter.

Catherine says to Morgan, “Oh, haven’t we talked a — about — enough about him?”

Bramwell says to Catherine, “Of course you came; I knew you would. But tell me this: you know, you’re not going to stop this marriage anymore than I stopped yours.” There must be something missing after “tell me this”.

In the credits, the roller gets stuck with “Dan Curtis Productions” at the bottom of the screen.