“What is it, what’s wrong?” says the orange man, startled. It’s been a bad few weeks for Gabriel, what with the debate disaster and his covid diagnosis and losing the suburban women. He doesn’t need any more October surprises; he’s had plenty.

“It’s Edith,” Daphne cries. “She’s dead. She’s been murdered!” Well, not murdered per se, but she’s been hanging out with Republicans, and none of them wear masks. “Gabriel, you were right, it was Gerard. He was out to dispose of her, and he nearly killed me, just now, in Edith’s room!” Gerard didn’t do any such thing, actually, but Daphne’s been the target of a disinformation campaign, and she’s got things all mixed up. She figures it’s either Gerard, or Hunter Biden; either way, it’s the second biggest political scandal in our history.

“I knocked him out with a candlestick,” Daphne continues. “I locked the door. I’ll get the carriage, and go for the police!”

“Now, wait a minute!” Gabriel tweets. “Now, wait, we’ve got to do this right.” He doesn’t mind that she’s going for the police, he’s all for law and order. It’s just that he can’t stop himself from interrupting women.

“Now, don’t panic,” he says, searching for the teleprompter, so that he can stay on message. This is what he’s been telling people all along, that there’s no reason to panic. Edith’s murder is going to disappear; all she needs is the miracle cure that he got at Walter Reed. The one thing that narcissist psychopaths can’t abide is when anybody feels uneasy.

Gabriel asks, “He’s up in the room, and the room’s locked?” Apparently all those “lock him up” chants finally worked.

“He’s in the room,” Daphne agrees. “Gabriel, aren’t you even shocked by all of this?”

“Of course I’m shocked by all of this!” says Gabriel. “I tried to warn Edith again and again, but she didn’t listen!” Sadly, that’s true; nobody listens to public health warnings anymore.

Gabriel frowns. “What kind of proof?” He’s skeptical, because he doesn’t think much of things like scientific evidence, which the lamestream media keep chattering about.

“This!” she says, handing over exhibit A. “It’s a cufflink with the letter G on it. I found it in Edith’s room; they must have struggled, and Gerard must have lost it.” She’s also got a whole bunch of emails that she acquired from some Russian guy that she met at a computer repair shop. 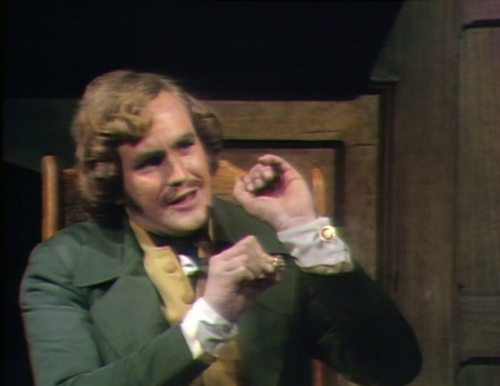 “You’re quite right, my dear,” he smirks. “You know, it’s rather frightening to think that something as small and insignificant as a missing cufflink could condemn a man.” Then he shows her that the cufflink matches the one that he’s wearing.

If you’re not familiar with the concept of monogrammed cufflinks, they’re what people used to use, before they invented Twitter. You could only send two characters at a time back then, and only to people in the same room. It was terribly inefficient.

And then Gabriel suddenly stands up from his wheelchair, and rips open his vest to reveal a Superman t-shirt. He feels great — perfect, even. Better than he did twenty years ago!

“You’re right, Daphne, you’re going somewhere,” he says, advancing on her in a menacing manner, “but you’re not going to the police.” This is a classic example of voter suppression.

So this is where we are, you and me and Daphne, in late October 2020: struggling with our bonds and desperate to break free, as a supervillain narrates every crazy thought that goes through his head.

“Why did you kill Edith?” Daphne gasps. She still thinks there are logical answers to questions like that.

“Because she was rotten,” explains Gabriel, securing her to the chair. “No one deserved to die more than Edith did.” Everything with him is always the most of anything.

What he means is that Edith was disloyal to him, because she wouldn’t investigate everyone that he wanted investigated, or distribute Russian intel talking points. Ultimately, everyone is disloyal to Gabriel one way or another, because they dare to imagine that their own lives or careers or consciences are more important than whatever it’s convenient for him to believe at the moment. Everyone who works for him ends up degraded and humiliated and ultimately discarded, and the only thing that’s important is his own pathetic, fragile ego, and his personal hold on the levers of power. Everything that he touches dies, and all we can do is hope that he won’t poison our nation any more than he already has. 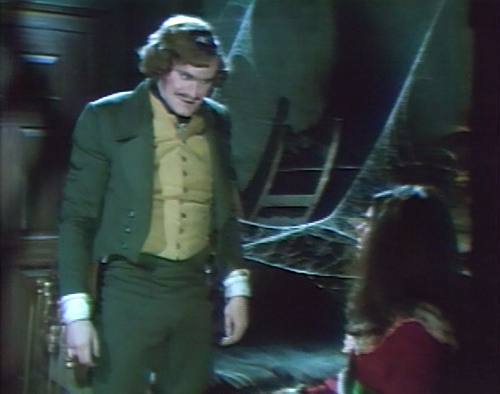 “And I killed Randall Drew, too!” he blabbers. He’s always saying the quiet part out loud. “I think it’s quite all right that you know everything now. It was all part of my plan, to get rid of Quentin… and it worked!”

So he’s monologuing now, actually monologuing like a Bond villain, explaining everything to the helpless captive who’s supposed to admire how clever he is.

Every day, he’s gathering thousands of people together, in tightly-packed cheering crowds who don’t wear masks or think very clearly, spreading the disease and carrying it home to their families, both medically and metaphorically. He delivers hour-long monologues, where he talks about how great he is, and how sinister and underhanded his enemies are, and they applaud, and he believes that every crowd is a significant enough fraction of everybody to make him feel good, for a little while. Then they tell him about the latest polls, which must be wrong, because — all those people at the rally! 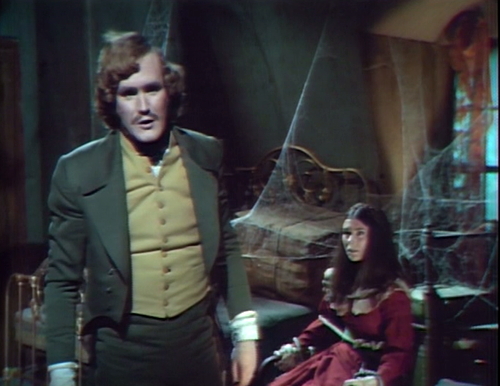 “You actually thought you would become master of Collinwood?” Daphne spits.

“Well, I didn’t think it would be Gerard,” he admits. “I tried to dispose of him, too, but he seems to have had more lives than a cat.” In other words, can you believe that I’m losing to the worst candidate in the history of politics?

“However, his time will come,” vows Gabriel. “I’m going to see to that.”

“What do you mean?” Daphne cries, and then he just goes ahead and tells her the entire plan.

The really remarkable thing about this clown’s nutty monologues is that he thinks he’s speaking in a language that smart people can’t hear. He’s spent weeks giving us all step-by-step instructions for how he’s going to steal the election. He’ll start by slowing down the postal system, so that mail-in votes aren’t delivered by election day. Then he’ll demand a final result by the end of election day, before all of the mail-in votes are counted. Then he’s going to claim that the mail-in votes are fraudulent, because they were mailed out to all citizens. Then he’s going to say that all of the genuine votes for him were dumped in a river. Then he’s going to get his attorney general to seize uncounted ballots and disrupt the tally, because the other side can’t be trusted to count them properly. And then he’ll say that it’s all rigged, and refuse to abide by the results, and he’ll count on all the conspiracy-theory nutcases to back him up.

And meanwhile, we’re like, dude, why are you telling everybody your stupid plan, months in advance? If you’ve got a master plan to steal the election, then you’re supposed to keep it a secret. That’s how sinister plans work.

So now everybody knows what he’s planning to do, and that’s why you see people lining up for early voting all over the country, and using drop boxes, and making sure that their votes count. Even people who don’t usually vote are coming out to vote against him, because he’s announced that he’s going to cheat, and if there’s one thing that people can’t stand, it’s cheaters. So we’re going to vote, and we’re going to get everybody else to vote, so that he’s defeated in such a landslide that he won’t be able to declare victory and get away with it.

I mean, Gabriel won’t. Obviously. This is a blog post about Gabriel Collins. 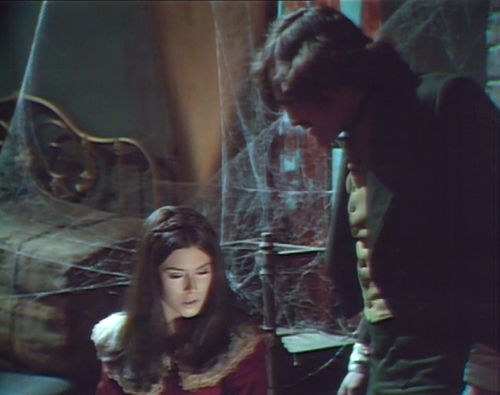 “You’re the only one that Gerard is capable of loving,” he says, lurking loudly in the shadows. “You’re his weakness, my dear. And you’re also my bargaining power. Now, Gerard is going to pay everything he owns in the world, just to see you alive, and I’m going to get it! I’m going to be financially independent for the rest of my life! And then I’ll go far away from here, and then I’ll notify Gerard as to where you are.”

And then he’ll get Mexico to pay for it, I guess. That’s usually how these stupid campaign promises work.

So we’re all crystal clear on the concept. Gabriel is going to tell Gerard that he’s got Daphne concealed somewhere, and he’ll kill her unless Gerard gives him everything that he owns in the world. That is the next step of his incredible plan.

When he gets downstairs, Gerard asks if he’s seen Daphne, and he says no, I have no idea where she is. Gerard says maybe I’ll go and see if she’s gone to Rose Cottage, and Gabriel says what a good idea, and Gerard leaves the house. So I guess Gabriel isn’t such a genius deal-maker after all.

Tomorrow: Action in the Afternoon.

When act 1 begins, Daphne is clearly waiting for her cue to start struggling with Gabriel.

Instead of tying a gag on Daphne, Gabriel just stuffs a handkerchief in her mouth.

Gerard tells Gabriel, “I looked over the, all over the house for her, upstairs, all over.” Then he says, “There has nothing been going on, Gabriel, between you — me and your precious little wife.”

Gerard stumbles over his line when he tells Samantha, “The last time I did see her, she — she was in a — in a st — hysterical state.”

When Gabriel tries to open the front door, it bounces off his wheelchair and starts to close in Joanna’s face.

Gerard tells Samantha that he’s heard about Tad’s departure, saying, “I just wanted to know what that was true or not.”

In the basement, when Gabriel says, “Do you know the strange room you talked about?” a shadow moves behind him, across the bed.

Today’s episode is the first appearance of Stella Young, who’s played by Gaye Edmond. She previously appeared on the show a few months ago, in episode 1131, as the ghost of Harriet Collins, who Angelique summons up to intimidate Daniel. Edmond will play Stella in four episodes total, until 1204.

Her only other screen credit is an episode of the 1969 show N.Y.P.D., and I don’t know a single other thing about her.

Tomorrow: Action in the Afternoon.