“Is counsel willing to admit that this woman is alive?”

You know, I’ve never had much regard for 1840 Quentin as a tastemaker in romantic entanglements, having married Samantha Drew, a woman whose range of emotions extends from passive-aggressive bitterness to murderous rage. And then along comes the deceased Joanna Mills, Quentin’s second choice, who was clearly a lateral move.

Quentin is currently in lockup, on trial for witchcraft, of which he is only partially guilty. True, he traffics in dangerous occult artifacts and he built a time-traveling staircase, and it’s still an open question whether he murdered all those cows — I mean, if he didn’t, then why isn’t he out there searching for the real killer — but lots of people have occult interests at Collinwood, and Quentin’s hardly done anything, if you grade on a curve. I don’t think he even used the staircase, which works perfectly, so honestly he should be in 1969 right now, appearing on trading cards and making himself acquainted with a wider variety of females.

And now, here’s this dreadful boat-anchor walking into his cellblock, and he thought he shook her loose months ago.

“You’re not going to be here much longer, darling,” she assures him, in the clear, dulcet tones of a woman who will call you “darling” even if you ask her to stop. “I’m going to do everything in my power to help clear you! You’re in serious trouble, and you need me. I was always there when you needed me. Do you remember, Quentin?” He remembers.

She wants to go to Collinwood and talk to her sister Daphne, who happens to be third on Quentin’s hit parade, and the only one fit for human society. “I want to see Daphne as soon as possible,” she announces.

“Well, before you do,” says Quentin, “I think we ought to have a long talk.”

“I know, darling,” she smiles. “We have so much talking to do.” And Quentin thinks, ummmm yeah, it’s not that kind of talk.

So, I don’t know, I remember back when they were good at casting on Dark Shadows, back before all these Samanthas and Hallies and Jeremys and Randalls and other assorted disappointments. It feels like they nailed it when they cast James Storm and Kate Jackson back in July, and then they got over-confident, and I don’t think they’ve made a decent casting decision since.

Luckily, they’ve got a deep bench of talented players from the last several years, so they can always pull out Michael Stroka when they need somebody swarthy, or in a pinch, they could fix Thayer David up with a new outfit, but I fear Gerard and Daphne may be the last of the great discoveries that Dan Curtis made on Dark Shadows, and that was six months ago.

Now we’ve got Joanna Mills, who we’ve heard about for months and months — we’ve even beseeched her, for pete’s sake, and beseeching isn’t free — and she’s this self-satisfied, stagey piece of work, who anyone with eyes would identify as the last person that even this second-generation copy of Quentin Collins would want to hitch himself to on purpose, without some kind of pre-arranged exit strategy.

Judge:  Miss Mills, is it true that you escaped from an asylum?

Joanna:  I was there, but I did not escape. I decided one day that I didn’t need to be there anymore, so I left.

Judge:  Without telling anyone you were leaving?

But that’s what “escaping” means, you utter nitwit, the judge does not reply. I mean, we wrote a theme song for this broad. It’s monstrous. 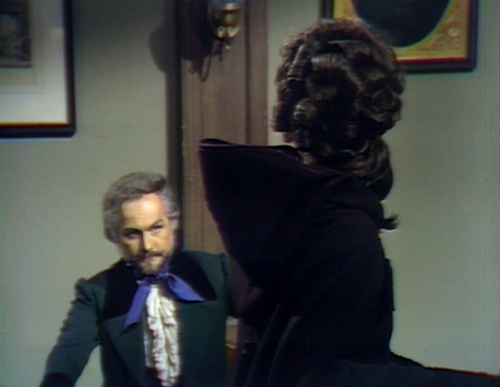 To his great credit, Humbert Allen Astredo has made the artistic decision that his character hates this woman more than heart disease and the First World War, and he spends the entire half-hour broadcasting his loathing and fury on all conceivable channels.

Given the opportunity to cross-examine, Dawson says, “The prosecution still contends that this woman is not a valid witness in the case, therefore the prosecution has no questions, your honor!” And then he sits down and glowers at her like he’s trying to incinerate her with his glare, reducing her to component particles.

They cut to a close-up of Dawson four times during the rest of Joanna’s testimony, and each time he is giving a masterclass in impotent, glass-shattering rage that Joanna Mills even exists on this earth. It is Astredo’s most realistic and understated performance in all of Dark Shadows.

“Now, Miss Mills,” says Barnabas Collins, acting incompetently for the defense, “there has been introduced into this trial a letter that the prosecution alleges was left on a — on a tree, by the spirit of someone they think is you.” And then he makes a cute little smile, because he really didn’t expect to get to the end of that line in one piece.

La Mills says that she’s familiar with the letter in question. “How did you come to write this letter?” Barnabas asks.

“Well, the evening I re— decided to visit Quentin at Collinwood,” she stumbles, “on my way there, I stopped by a place in the woods where we used to meet. A large oak tree. We — we used to leave notes for each other there.” 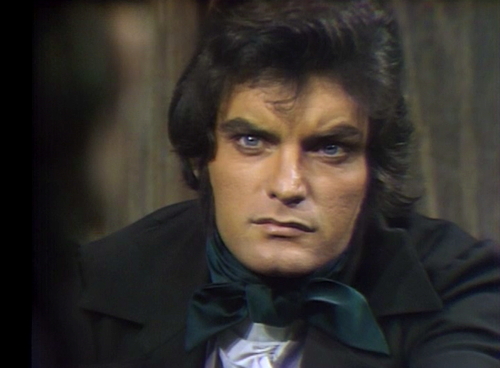 Quentin stares at her with horror, thinking about how everybody knows now that he used to date this bag of wet hay.

“Then, when I moved close to it,” she continues, “I was very surprised to discover a note, for me, from Quentin.”

She starts to pant heavily, and comes entirely unstuck on her lines.

Cut to Dawson, imagining her being pulled to pieces by poisonous dogs, an emotional response that is entirely dramatically justified.

Well, after that, there’s nothing to do but thank her for her testimony, and start striking things from the record. It’s a toss-up whether the American judicial system can stand up to this treatment. Now all we need is to put Joanna and Samantha in a scene together, and then turn our face to the wall, and quietly expire.

Tomorrow: I Feel Ya.

Barnabas asks, “Wasn’t it Mr. Dawson himself, who…” (look at the teleprompter) “first informed the tribunal of what Joanna Mills actually looked like?”

Gerard tells Samantha, “I would so much like to be there to see the final plannings put to use.” It’s possible that this was actually scripted, but I’ve never heard that phrase used before, and I’m familiar with a lot of phrases.

Samantha says that she left the note in the tree “last night”, but that was in episode 1173, which was two days ago in story time. Last night was episode 1177, when Stokes arrived at Collinwood, and Julia and Angelique followed Roxanne’s dream to find Barnabas.

Quentin says, “Barnabas, I don’t see how they can refuse to let Joanna take the stand!” Barnabas replies, “Of course they will.” He means that they won’t.

Joanna places her right hand on the Bible to swear; it should be her left.

Barnabas cries, “Your honor, are we go through the ordeal of questioning this woman’s insanity?”

The judge trips on a word when he responds to Dawson, “You and the counsel for the defense will have ample chance to — to, uh, question her later.”

Barnabas tells the judge, “Your honor, I think it is very clear that — clearly established, that there was nothing supernatural about this letter.”

When Barnabas tells Dawson, “I believe that it has become very obvious, not only to the court, Mr. Dawson —” someone in the studio coughs.

The judge says, “Mr. Dawson, the court is now most curious about some earlier testimony concerning the appearance of a so-called ghost at Collingwood.”

Lee Beery plays Joanna Mills for ten episodes, from last Friday’s surprise appearance through episode 1193. Before this, Beery’s only TV role was Maid Marian in a 1968 TV-movie The Legend of Robin Hood. She’d been on stage quite a bit, including a revival of Oklahoma at Lincoln Center in 1969.

Back in November, Barbara Tracey was a stand-in for Joanna for two episodes, although now that I think about it, that might have been a stand-in for Samantha, who was standing in for Joanna. I don’t really understand that part of the storyline.

Tomorrow: I Feel Ya. 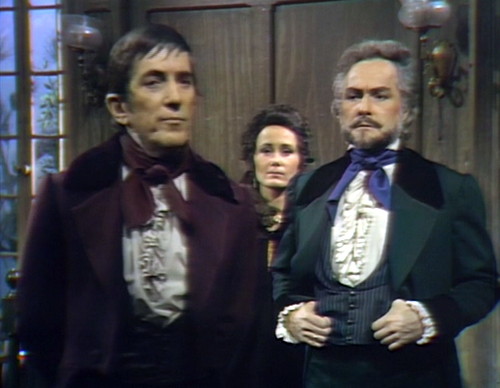