“Oh, Julia, if you could have seen his face yesterday,” Angelique breathes.

Angelique whirls around. “And his eyes?”

Julia doesn’t respond, so I assume she’s thinking, You know what? I saw his face, but I totally forgot to look at his eyes. Oh, well, maybe next time. 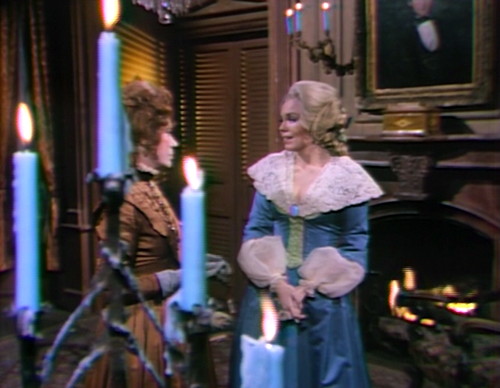 They’re talking about Barnabas, of course, like they ever do anything else. He’s recently been cured of his vampirism, hence the importance of keeping up with the eye-looking. Now he’s gone missing, which probably means he’s bricked up in some alcove somewhere, but they can’t figure out which one. Sometimes I think people have too many alcoves.

But Angelique knows who’s responsible — the disembodied head of Judah Zachery, a 17th century warlock who we’re still treating as a major threat to the Collins family, even though Angelique has killed way more Collinses. So far, I’m not sure Judah has even bagged a single Collins — by my calculations, he’s killed Ben Stokes, Otis Greene, Hortense the governess, Lorna Bell and Mildred Ward, in that order, and most of those people hardly even know the Collinses.

Anyway, Julia’s eyes flicker, and Angelique says, “Yes, you know of Judah Zachery and his powers. Barnabas told me of you and Leticia in that tomb, trying to unite the head and body!” This is a little insensitive; I bet Julia was hoping not to revisit that item on her CV.

So Julia says, “How do you know Judah Zachery?” and oh my god, have you guys seriously not talked about this until now?

Judah Zachery has been unfolding his sinister plans for weeks, which is supposed to demonstrate how cunning and underhanded he is, but honestly, it’s only because the people on the other team have just stood by while he sprints around the bases, unimpeded, scoring run after unearned run.

Barnabas and Julia have mostly been fighting Angelique, until the witch suddenly swapped sides and saved Barnabas a week ago. They talked a bit about Gerard back then, but now it’s a week later and they’re still doing the preliminary briefings. It’s no wonder people’s heads keep coming off; I can feel mine loosening with every epsiode.

So Angelique tells Julia the whole unlikely story, using some gorgeous late-stage backacting, a monologue improvement system that the show hasn’t been featuring for a while now.

“I have known him for a very long time,” Angelique smiles. “I met him in my village, near Bedford. I was young… trusting… innocent. That appealed to him. I came under his power, and he made me a member of his coven. And then he showed me how to have power over others.”

So hold on, I’m trying to get this straight. Was this before or after your father locked you in a chapel with a bunch of vicious dogs? And what about Cesaire? What price Thierry? I spent a very long time yesterday running through every detail of Angelique’s backstory, and if you read that post, then I’m sorry to tell you that it was even more of a waste of time than you originally thought. It turns out she wasn’t in Saint-Pierre at all; she was about two hours south by I-95.

“Yes!” Angelique emotes. “He was tried for witchcraft, found guilty and beheaded! And it was my testimony that convicted him.”

Julia puts zero and two together. “Then you must be Miranda,” she says, “the woman the newspapers wrote so much about!”

“Yes, I was Miranda,” Angelique admits, “the woman that Judah Zachery loved. And grew to hate!”

And then you lived by the sea in Martinique and learned about the loas, Julia doesn’t say. I don’t know why this retcon brainfreeze is bothering me so much; I thought I’d adjusted my expectations a while ago and accepted their decision to rewrite Angelique’s past in this nonsensical way. I think I just miss Cesaire, is all. 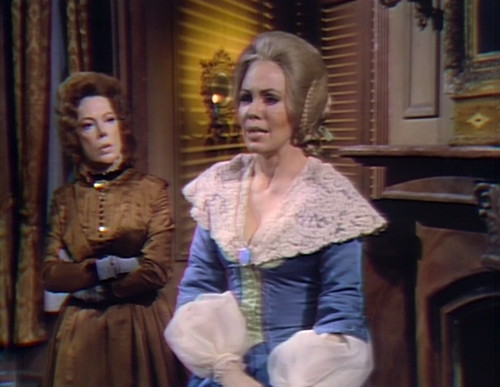 “I can still remember the look on his face when he vowed vengeance on us all!” Angelique boasts, but it’s not much of an achievement; he’s still got that look on his face, in the closet of Gerard’s bedroom, and if you forget it, then you could hop over to Rose Cottage and get a refresher.

Julia says, “Judah Zachery was destroyed, Barnabas and I both saw his body.”

“But he has possessed the body of someone else!” Angelique explains, and seriously, is this still where we are? The possession happened more than six weeks ago, and here you are, still reviewing the case.

Angelique says that she thought it was Quentin who got custody of Judah’s spirit, but Julia says that he didn’t.

“I know that!” Angelique responds. “Barnabas was going to testify at Quentin’s trial, for him! If Judah were Quentin, then he would do nothing to Barnabas until after the testimony.” This is not the primary piece of evidence — it’s not even in the top ten — but you know what? If that’s what tipped the scales for Angelique, and we can move on, then it’s fine with me.

“Judah is Gerard!” Angelique says, finally. And then they start talking about something else.

Meanwhile, across town, Daphne has come to some new conclusions of her own. She’s had a pretty informative evening, running around trying to communicate with an imaginary dead sister, and getting in trouble for it.

You see, Gerard — who is in fact secretly the legendary 17th century warlock Judah Zachery — encouraged Daphne to get Quentin to write a note to Joanna so that Daphne could deliver the note to an oak tree, at which point Lamar Trask could jump out and say, “I’ll take that note, Miss Harridge!” And then he took that note.

It’s all got something to do with manufacturing more evidence against Quentin in his ongoing trumped-up witch trial, because if murdering five non-Collinses isn’t enough to convict a guy, then you might as well accuse him of writing notes to agriculture.

But Gerard’s plans hinge on assuring everybody in the entire storyline that he’s secretly on their side, which is a great strategy if you’re on Survivor, although if every conversation you have takes place in the Collinwood drawing room, then being a triple-agent is a lot harder to pull off.

And then she stalks away, leaving Gerard behind, which means that finally Daphne has figured out what’s going on, and there is at least a slim chance that something in this storyline is finally going to move forward.

Except that Gerard has his magical speed bump device, which he can use as a Men in Black neuralyzer to wipe information out of Daphne’s head. 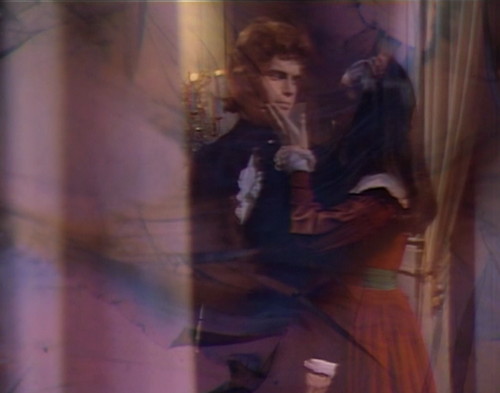 And, damn it, she does. We fade into the multi-hued murk that we’ve apparently decided is what dreams look like, where Gerard is the king of memory-erasing makeouts. Daphne dreams, and the storyline slows once again, as the audience, exhausted and annoyed, slips into bed and tries to forget.

Trask tells Daphne, “In due time, you will be called back to testify again at the witchcraft trial. In — in — before that, I trust that you will be enlightened enough to tell the truth.”

Angelique tells Julia, “And so with Barnabas, Judas has succeeded in ending two old scores.” She means Judah, and settling.

Standing in the Old House, Angelique tells Julia, “Gerard was here at Collinwood, when I had the vision!”

Julia asks Angelique to help locate Barnabas, but she says, “I have no powers as a clairvoyant, none at all!” Angelique has used her powers to locate people plenty of times.

Julia says, “Barnabas is still alive, I know that!” Angelique answers, “If he is, it’s because he enjoys his agony too much to kill him!”

There’s an awkward cut from Julia leaving the Old House to Gerard standing by the fire at Collinwood.

Gerard tells Trask, “The first time, she will come to receive the letter. The second time will it be her reply.”

Gerard tells Trask, “Now, my friend, think of the great commotion you will — you will have in court, when you bring a letter from a dead wood — give it to — Dawson — a letter that says — it is addressed to Quentin Collins!”

A boom mic can be seen when Gerard follows Samantha into the drawing room.

Samantha asks, “Do you think one hour can make somebody forget everything?” and Gerard replies, “When that hour is as important to us, yes.” What?

Gerard tells Samantha, “Lamar and I will wait for you, hidden in a tree near close.”

When Daphne wakes up from her dream, someone can be heard walking around.

Gerard tells Daphne, “Perhaps it would be best if you went to Desmond and told him to get prepared for what Trask is going to bring into court with you.”

Daphne says, “I just feel differently, that’s all.” Gerard replies, “Daphne, I realize how different — difficult it’s become for you.”

10 thoughts on “Episode 1173: The One Where Everybody Finds Out”