“What has shaken your little mind now, that makes you not believe me?”

It’s Christmas Eve 1970, and the tidings aren’t as comfortable or as joyful as you might wish. In-universe, Gerard Stiles, possessed by the will of the legendary warlock Judah Zachery, is himself in possession of the Collins family estate. If allowed to go unchallenged, this will result in the destruction of Collinwood, one way or another, which is a shame, because I’m not done looking at it yet. Out-of-universe, this is the last Christmas that Dark Shadows will ever see, because this trial storyline is ruining everything.

Quentin’s only been on trial for witchcraft for three weeks, but somehow it has drained the plot of all momentum; everything else has to slow down while the lead characters get foiled again and again. We spent most of this week concerned about a plot to get Daphne in trouble for dropping a note in an oak tree, and today it turns out they don’t even need that, because they have different, even more damning evidence. By the end of the episode, it looks like Quentin probably should be beheaded for witchcraft after all, and so should pretty much everybody on the show. I don’t know about you, but I am letting something me dismay, and I don’t care who knows it. 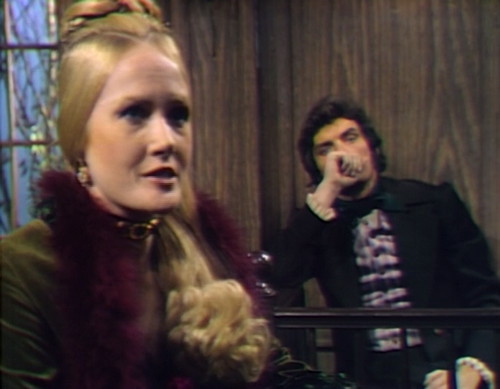 Exhibit A, your honor, is the complete and utter nerfing of Quentin Collins, ex-kaiju. In the 1897 storyline, which finished just over a year ago, Quentin ran the show from start to finish, juggling more storylines and simultaneous girlfriends than you could count. Look at him now. He’s just sitting quietly in jail, not trying to escape or seduce or even come up with a decent defense.

In this episode, Quentin gets seven lines, which are as follows:

Just how did he know to be there?

Do you think that they’ll start accusing Daphne of consorting with the dead?

Leticia, you’ve got to!*

Quentin has thirty-seven words of dialogue in this episode, all of them reactive and none of them jokes, and after each of the three lines marked with an asterisk, the judge pounds his gavel and specifically tells Quentin to shut up. This is miscarriage of justice on an epic scale.

It’s not that Dark Shadows has forgotten how to make a character interesting and fun, because they obviously do; they’ve just been investing all of it in Gerard. That’s great for Gerard fans, but they’ve neglected to build up anybody else as a worthy competitor. In 1897, Quentin had Laura to tangle with, and Magda, and Jenny, and Trask, and Barnabas, and Angelique, and Count Petofi, and the moon. Gerard is basically surrounded by cronies and yes-men, and Quentin, the handsome lead character who should be Gerard’s main opponent, is being systematically stifled. 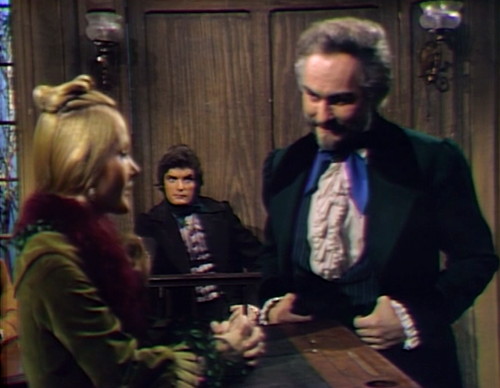 And it’s not just that he doesn’t have a voice; he also doesn’t have a leg to stand on. Charles Dawson, as the prosecuting attorney, spends the second half of this episode demonstrating that Quentin is actually guilty of a lot of things that he’s being accused of.

Right from the top, he’s running them in circles. Dawson asks Leticia, “Did you at any time have a conversation with Quentin Collins about the occult?” and then Quentin’s lawyer Desmond pops up, and says, “I fail to see where this line of questioning is leading,” although it’s perfectly obvious where it’s leading, and it’s clearly germane to the case. The judge overrules the objection, and then Desmond has to walk all the way back to his little chair at the back of the class.

So Dawson brings out the legendary Journal of Judah Zachery, which Desmond objects to again, and once again, correctly, he is overruled.

Then Dawson asks Leticia if she was possessed by the head, and participated in an effort to reattach it to the body through voodoo and mad science, which she was, and she did.

“I don’t want to answer that question, your honor,” Leticia cries, “I swear I don’t. It’s got nothing to do with Quentin. I can’t tell you about that head! I just can’t!”

And Quentin stands up and says, “Leticia, you’ve got to!” which is the first time that the judge bangs his hammer and says “Order in the court!” and I don’t even know what Quentin was trying to accomplish.

Leticia finally admits that yeah, she was possessed, and Dawson asks who brought the head to Collinsport in the first place, and obviously the answer is Desmond, who brought it as a gift for Quentin.

And this is where the whole storyline goes awry, as far as I’m concerned. Desmond did buy the head in Macau and bring it home, and he was possessed by it, and he was responsible for Otis Greene’s death. And then the head possessed someone else, and Desmond tried to forget all about it.

Desmond and Quentin really have been fooling around with the occult for quite some time, and if other people are hurt and/or killed by their recklessness, then they consider that somebody else’s problem. They’re not even trying to figure out who Judah is possessing now, or how they got into this mess.

This storyline is supposed to be a callback to Vicki’s witch trial in 1795, which was also capricious and way too long, but you can see why they wanted to return to the idea. Vicki was in a classically dramatic situation, trapped and unjustly accused, with every piece of evidence pointing towards the false conclusion that she was guilty, because people didn’t understand time travel and she was terrible at explaining it. There was a clear conflict: Angelique was a witch, Reverend Trask was a ranting fanatic, and Vicki was the innocent caught between them.

There was also a clear separation between the Collins family and the supernatural forces threatening them. Nobody in the Collins or DuPres family was messing around with the occult, except for Natalie occasionally flipping over a few tarot cards, so the supernatural assault that they suffered was horrifying, incomprehensible, and most of all, undeserved.

What’s happening in this storyline is basically the opposite. Everyone involved in Quentin’s case is compromised. Desmond and Quentin collect radioactive artifacts; Flora collects supernatural houseguests. Desmond, Daniel and Gabriel are responsible for at least one murder each, and even more are implicated if you count attempted murders and collateral damage. Even the person in the Jane Eyre role, girl governess Daphne, arrived at Collinwood planning to murder her employer.

The Collins family is a legitimate danger, to themselves and the other residents of Collinsport, and at a certain point, they need to take responsibility for the damage they wreak on the community. I mean, are they even aware that Santa Claus is coming to town?

Gerard trips a little over the line, “The judge has asked the courts be closed, because of the — the distruption in testimony.”

Desmond tells Quentin that Trask caught Daphne at the oak tree. Quentin asks, “Just how did he know to be there?” Desmond is silent, and shakes his head slightly, apparently indicating that was the wrong cue. Quentin checks the teleprompter and jumps to another line.

Leticia swears in with her right hand on the Bible; it should be her left.

When Dawson reads from the journal, he pronounces Leticia as “Le-teach-ya”.

Dawson asks Leticia, “Who brought the head to Rose Cottage, Miss Faye?” and then adds, two seconds later, “… in the first place?”

The three judges reappear today after a week and a half absence, and one of them is a different guy — Tom Markus has replaced Carl Nicholas as the 3rd judge. Markus is known as the Mustache Judge, by me if not anyone else. He’s got a droopy brown mustache and looks like he doesn’t really care about anything, either in this trial or in the world in general.

This was apparently Markus’ first screen role; it’s not even on his IMDb page, but it’s listed on the resume on his personal website. He was in a bunch of TV movies that you didn’t see, like Unabomber: The True Story and Dear Dumb Diary, plus he was on Touched By an Angel a couple times and he did a bunch of plays in Philadelphia. He still has the mustache. 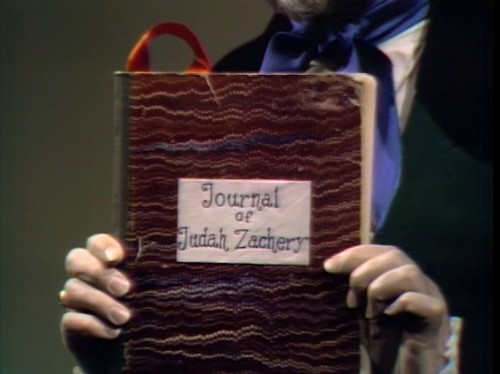