“When one deals with Judah Zachery, there is no margin for error!”

“Something else has happened,” Angelique shudders, “something far more terrifying!” Angelique, of course, is something pretty terrifying herself, so whatever’s got her spooked must be top-shelf in the terror department.

Her gypsy companion Laszlo observes, “I’ve never known you to be frightened of anything!” which is why you keep gypsy companions around, for remarks like that.

“Well, I have good reason to be this time. Judah Zachery has returned!”

“Who’s Judah Zachery?” Laszlo asks, and you see what I mean? Super helpful.

“I’ll tell you all about him,” Angelique purrs, with that subtle satisfaction you feel when somebody feeds you the right cue. “And you listen, and listen very carefully, because when one deals with Judah Zachery, there is no margin for error!”

So, like I said, this ought to be good. Angelique is the soap opera witch-vixen supreme, the woman Erica Kane hopes to be when she grows up. She sashayed onto the show three years ago and shantayed the entire Collins family, as well as the audience. Other villains come, sometimes even pretending to be Angelique’s boss for a few minutes, but when they go, begging her to catch them as they fall, she sidesteps out of the way, and prepares for another costume change.

She’s done this before, acting scared of somebody in order to prop them up and make them into the new Big Bad — Nicholas Blair and the Leviathans and Tim Stokes and even Dameon Edwards, for about five minutes — but this time they’ve gone all the way back into history to the witch trials of 1692, and inserted a new prologue into Angelique’s backstory. This happens sometimes on soap operas; it’s usually best to stand back, and wait for it to blow over.

“And then shortly after the trial of Judah Zachery in 1692,” she explains, “I was given safe conduct out of the country, and Judah was beheaded.”

Laszlo exclaims, “So you became what you are because of Judah Zachery!” The answer to this question is obviously no.

“Yes,” she agrees. “But his powers are awesome.” They’d better be.

Because I’m not sure I believe in this Angelique, fretting and cowering behind decorative urns. My preferred Angelique is the one who grew up as a poor servant girl in Martinique, and who became a sorceress because she was batshit crazy, and somebody pissed her off. That version of Angelique is commonly referred to as Angelique.

Meanwhile, this Angelique of 1840 thinks that she used to be called Miranda DuVal, and she lived in Bedford in 1692, until she confessed her sins to Amadeus Collins of all people, and testified against Judah, and then she ran and hid somewhere and changed her name, until she decided the heat was off and it was time for her to fall in love with Barnabas and take over Dark Shadows. There is nothing that anyone can say to convince her otherwise.

“I’m certain that his spirit has lived all this time!” she erupts. “And now it has taken possession of some living person, and he’s in complete control of that person.” She thinks it’s Gerard, because he’s the one who called her Miranda a while ago, and because obviously it’s Gerard.

“But I’m not sure!” she wails. “I have to find some proof that he’s the one!” The old Angelique wouldn’t care about proof; she’d just start murdering people. The house would be hip-deep in voodoo dolls by now.

And of course it’s him, everything is him, he’s tearing through the show like an avenging angel, wielding a flaming sword and dishing out injustice with both hands. Gerard killed Lorna, and framed Quentin, and married Samantha, and manipulated Trask, and seduced Daphne. He is currently the trusted confidant of practically every character on the show, even people who openly hate him. The only person who doesn’t trust him is Angelique, and that will be corrected by the end of the day.

Gerard and Gabriel have a scene at the top of today’s episode about who’s going to be Daniel’s new heir now that he’s disinherited Quentin, and if that’s a question in the current storyline, then the answer is perfectly clear. It’s Gerard!

This beats the previous all-time streak records of Angelique at the beginning of 1795 (25 out of 30 episodes), and Count Petofi in the third act of 1897 (24 out of 30). The only person who matches it is Julia in the run-up to 1795, when she was in 21 episodes in a row, including one that was almost entirely about her playing solitaire. Gerard is at that level. 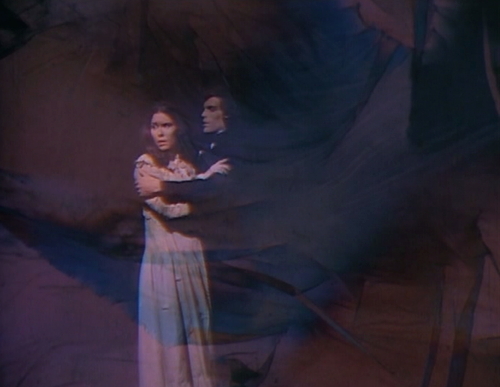 And he achieves it the way that Julia, Angelique and Petofi did, by being smarter and sneakier and funnier than anybody else on the show. He has scenes today with Gabriel, Daphne, Angelique and Laszlo, and in every scene, he knows more than they do, even when it seems like he doesn’t.

“One of these days,” he says, drawing close to her, “you will have to make up your mind about me, Daphne.”

“One of these days, I certainly will,” she agrees.

“Well, I already know what the outcome will be,” he grins. “So I will leave it to you, as a pleasant surprise.”

Then he says, “Good night, Daphne,” and walks out of the drawing room. Gerard does not actually live in this house.

And then there’s the palm-reading scene, which is about as close to a comedy sketch as you’re going to get on Dark Shadows. Angelique’s decided that she needs to cast a spell over something to find out if Gerard is actually Judah Zachery, so she tells Laszlo to drop by the house and steal Gerard’s watch fob.

Gerard opens the door when Laszlo knocks, and his immediate response to Laszlo’s greeting is a tired “On your way, gypsy.” Laszlo explains that he has a friend who lives here, and Gerard audibly sighs. “I’m afraid gypsies don’t have friends,” he says. “Now, begone!” When one deals with Judah Zachery, there is no margin for gypsies. 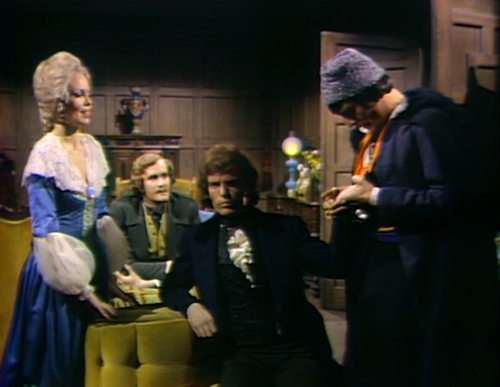 But chair-bound Gabriel likes anyone who flatters him, so he invites Laszlo in for another pep-talk palm reading. Laszlo provides the expected reading, which is that Gabriel will be extremely pleased by something in the near to medium term, and then Gabriel offers up Gerard’s palm as an extra-credit reading assignment.

Gerard on the whole would rather be on the supply side of the spooky secrets; he’s the one who interprets dreams and cures headaches. Besides, this isn’t even his palm anymore. But he gives in with bad grace, looking bored while Laszlo peers at his fin and says that there are some clouded areas which he might be able to see better if he was in reaching distance of Gerard’s vest pocket.

So here is our hero, for the next six weeks anyway — a con man, barely pretending that he’s being conned by another con man. He allows Laszlo to pickpocket his watch fob, and when Angelique looks into the fireplace and asks the Prince of Darkness to show her the face of her enemy, he elbows Satan out of the way and sends her a vision of Quentin’s face, just to mess with her. He probably stole the watch fob from Quentin, anyway; he’s certainly stealing the show.

Gerard tells Gabriel, “I’m afraid I can’t tell you. You see, I kept my word to Daniel.” He means “gave my word”.

Angelique tells Laszlo, “Barnabas has got no way to find out — to think that you would know that!” Later, she cries, “Don’t you see, that’s why I’m sure Judith has come back!”

When the clock strikes and the camera moves to Angelique, you can see the boom mic.

This is Michael Stroka’s last episode, going out with a nice comedy palm-reading routine.  He appeared in an Off-Broadway play, Funeral Games, in 1973, and then played a character named Quentin on Edge of Night from 1975-76. He had several guest roles on primetime series, usually with a sci-fi/supernatural bent — Wonder Woman, The Next Step Beyond, Buck Rogers in the 25th Century. His movie appearances include Island of Blood (1982), the Eddie Murphy/Richard Pryor teamup Harlem Nights (1989) and The Closer (1990). He died in 1997.

31 thoughts on “Episode 1158: When One Deals with Judah Zachery, There Is No Margin for Error”