“Each time it reappears, murders follow in its wake!”

Well, this is what happens when you try to un-inevitable the inevitable; shit gets messy. Time-climbing ghostbusters Barnabas Collins and Julia Hoffman have peeled back the layers of the fourth dimension, visiting the undiscovered country of 1840 in order to avert a tragedy that they know perfectly well is going to happen a hundred and thirty years from now, right in front of their faces.

Their plan is to figure out how everything got this way in the first place, and then use that knowledge to make it not happen the way that it’s currently happening before it happens, which it already has. So it’s not going that well. 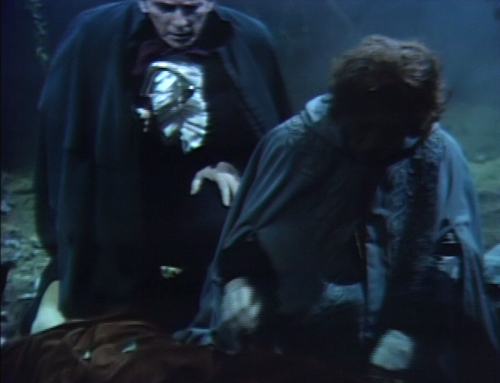 For one thing, there’s a headless corpse wandering the woods, heedlessly tugging at people’s neck area. This is a whole other subplot that Barnabas and Julia haven’t even heard of yet. The dead head of a 17th century warlock is reaching out through the ether to animate its body, which is taking its revenge on the world at large by running across people and then trying, unsuccessfully, to decapitate them.

In this case, the victim is a governess named Hortense, who approached the wrong ominous leaf pile at the wrong time. Barnabas and Julia find the remains after the fact, and Barnabas cries, “What happened to her? It looks as if someone tried to tear her head off.” It’s left up to the audience’s imagination what that would look like, although I’m having trouble picturing it myself. A broken neck, I guess, although I’m not sure how you’d tell the difference between a strangling and an incomplete head-tearing.

Anyway, it turns out Hortense is actually still alive, and she manages to eke out a few last words before she succumbs to whatever it is that happened to her. They built governesses to last, in those days.

I don’t know why the corpse is going around trying to get a head collection started. The creature’s currently zero for two, and what would it even do if it succeeded, stick Hortense’s head onto its neck hole and start a new life as a governess? 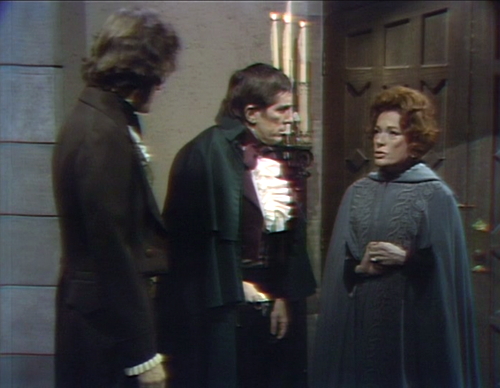 Julia and Barnabas head to Collinwood to tell everyone not to expect too much in the way of an education experience for the foreseeable, and obviously Quentin is alarmed when he learns that the governess is dead. A dead governess on the lawn is bad luck, and if you leave the body out there for too long, it attracts novelists.

Julia reports that Hortense managed to scrape her way back to consciousness long enough to say that she was attacked by a headless man, which is even more alarming, in its way.

Quentin cries, “No!” and heads for the door, presumably with some kind of destination in mind. Barnabas offers to help him scoop up the remains, but Quentin says, “I’m not going to see her!” and then he keeps on walking, out into the night. 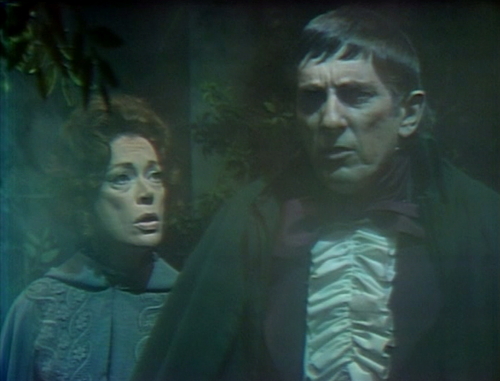 Barnabas and Julia follow as far as the porch, and Barnabas even shouts, “Quentin, wait!” which is one of those things that people do on TV shows when they’ve gotten to the edge of the set and they still have stuff to say. They always say stop, come back, but imagine how dramatically deflating it would be if the other person actually stopped and came back.

Instead, they stand on the stoop and ask each other urgent questions, like “Where could he be going?” and “A headless man, how could there be such a thing?” They don’t bother to follow Quentin, because he’s probably not going anywhere in particular. 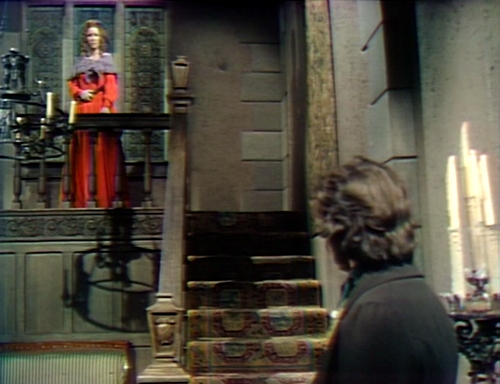 And that turns out to be the case, because three minutes later, he walks right back into Collinwood, and we never find out where he thought he was going. A couple laps around the estate, I guess, and then home in time to catch his wife trying to take their son away at gunpoint.

This is related to a whole other soap-opera subplot about Quentin and Samantha’s terrible marriage, which they discuss at the top of their lungs for the next three minutes in a row. They’re unhappy.

One of their problems is that Samantha’s in love with another guy, and she’s trying to take her son and run away. Quentin says that she’s free to go as long as she leaves Tad here, and she says that Tad isn’t Quentin’s son anyway, and then, wham! Quentin slaps her across the chops. 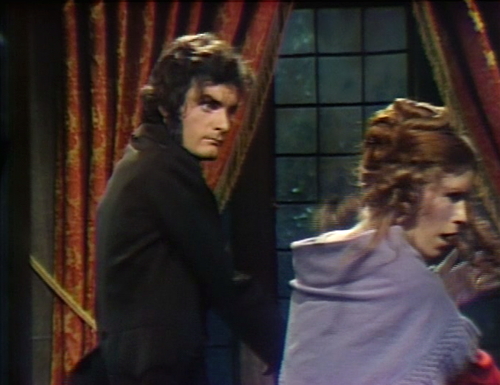 Now, I’ve already discussed how upsetting and unromantic this version of Quentin is, so this is really just putting a period at the end of that sentence. This is not what you do when you want people to invest emotionally in a lead character’s story arc. The optics are bad. 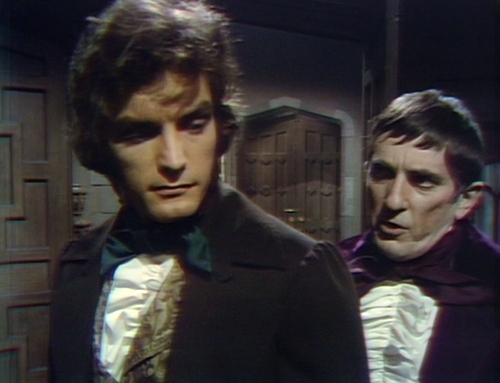 So I don’t know, maybe we should be out hunting for the mad killer stalking the estate. At least, that’s what Barnabas wants to do, and it sounds like it could be fun.

But first, he has a long series of questions that Quentin doesn’t want to answer.

And Quentin just stands there and takes it. He’s probably thinking about smacking Barnabas in the face. This could be the epic Barnabas/Quentin slap fight we’ve all been waiting for. 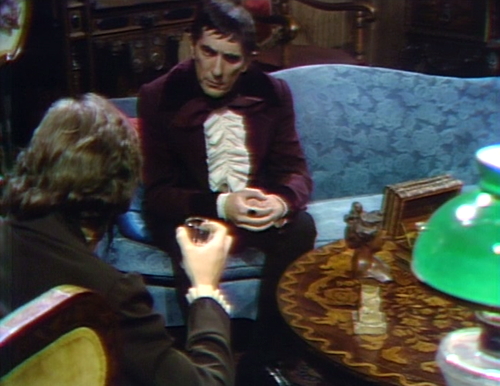 Instead, Quentin breaks down and confesses that there is a headless creature, and it’s all Desmond’s fault. Desmond found the head of Judah Zachery in Macau of all places, and then — under the head’s influence — dug up the body and set it loose on the community. Desmond is not currently in prison because nobody’s thought of it yet.

Quentin explains the whole weird backstory, which dates back to 1692 and involves decapitating a dude and then putting his head on public display, which didn’t turn out to be as hot of an idea as they’d hoped. They buried Judah’s body in a secret place, which it turns out was in a graveyard anyway, because they were afraid that if the head and the body were put back together then he would spring to life again and they’d have to start over from the beginning. I don’t know where people get these kinds of ideas. I’d say violent video games, but it was 1692 and all they had was Wii Sports.

Barnabas recommends that they find and destroy the head, but Quentin grouses that people have tried that in the past, and no one has ever succeeded. Then Barnabas suggests that they grab some weapons and go hunting for the body.

“No, no, no,” Quentin replies. “Desmond and I have already searched, and we didn’t find anything.” Quentin needs to be part of the solution. 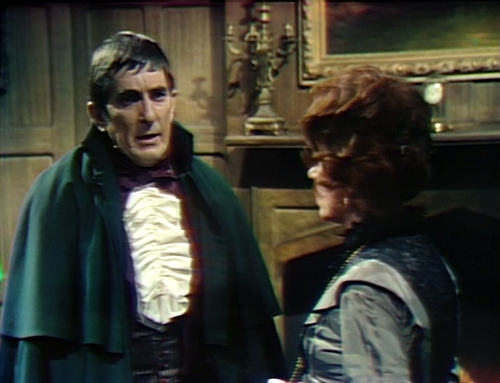 They grab guns and go traipsing around in the woods for a while, until they get bored and come back defeated. Yesterday, Hortense walked outside and found the monster under a pile of leaves, but Quentin and Barnabas don’t have that level of tracking skill. Besides, there are leaves everywhere; you can’t look under all of them.

So Barnabas returns to Collinwood to confer with Julia, who decides to grab the episode and take it in another direction. “Barnabas,” she asks, “you know what Hortense’s death means, don’t you?” He does. “It means the position of governess in this house is now open,” he says, and then they stand around and worry about it.

That’s how things go in the 1840 storyline; the scenes just kind of wander like headless creatures, echolocating for random victims. A minute ago, this episode was about Quentin and Barnabas working together to destroy the body, but every time somebody walks outside, they walk back in with a completely different agenda.

The issue they’re concerned about now is that in the future, Collinwood was haunted by the ghost of a governess named Daphne, who made a series of terrible decisions that resulted in the house falling down. If they can keep Daphne from taking the governess position, then maybe they can un-impend the disaster. 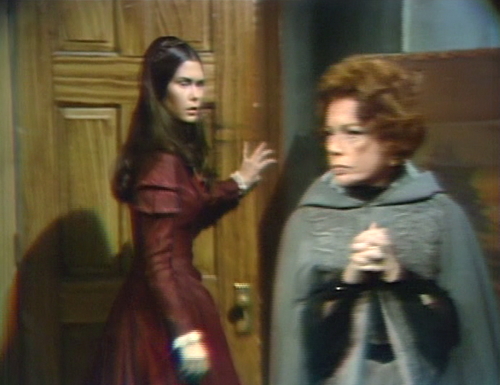 So Julia goes and visits Daphne like the opposite of a corporate recruiter, cold-calling her to say that she shouldn’t accept a job offer that she didn’t apply for. It’s basically the invention of LinkedOut.

“You must leave Collinsport immediately,” Julia urges, “because if you don’t, you will probably die.” As an opening line, it definitely gets Daphne’s attention, but it doesn’t do much to build trust.

Julia continues, “Sometime soon, you will be offered a position as governess in Collinwood. I promise you it will happen. If you accept that position, it will lead to your death!”

Naturally, Daphne’s next line is, “Who are you?” which is a good question. Julia usually has more sense than this; she should be able to think up a strategy that involves sleight of hand and costume changes. But all she can do today is go and tell the truth, which isn’t her strong area.

“All right,” sighs the weird mad crone from the future, after everything has failed. “I’ve done what I can. Please don’t tell anyone anything that we’ve said. If you do, I will say that we’ve never spoken to each other.”

Okay, fine, Daphne says. I seriously have no idea who you even are. 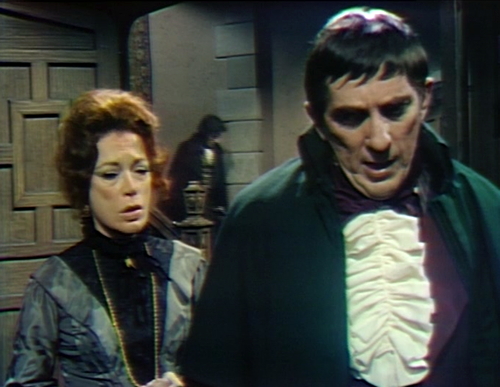 So Julia returns to Collinwood, side-stepping the headless monster and the spousal abuse and the mystery of Tad’s parentage, and all the other issues that have come up during this half hour of perplexing television.

“Barnabas, I failed,” she explains. “I tried to convince her, but I couldn’t. What will we do now?”

Barnabas looks morose. “Wait for the next step, and try to prevent that,” he offers. And meanwhile, behind them, Quentin walks down the stairs and out the door, wandering off into the night, in search of who knows what.

In act 1, when the scene shifts from the woods to the Collinwood drawing room, there’s a banging sound with a bell; it sounds like someone smacked a telephone.

Barnabas rushes up the foyer stairs and heads for the door, but then apparently stops on the landing and waits about ten seconds for Julia to come in and tell him to come back.

When Barnabas and Julia follow Quentin out the front door, there’s a creaking, scratching sound that’s apparently coming from someone desperately trying either to get the smoke machine to work, or to get it to stop working. There are random billows of vapor throughout the conversation.

During the conversation, Barnabas tells Julia, “Quentin seemed to know everything, and understand it. He seemed to know something!” Then he exits the scene while Julia still has three more sentences to say to him.

When Barnabas joins Quentin in the drawing room, you can see one of the studio lights.

When Quentin and Barnabas are near the drawing room window, smoke is going by and a tree branch is swinging in the wind in a very distracting way.

Barnabas tells Quentin, “If you’re holding something from us that we must know, you will be jeopardizing the lives of everyone at Collinwood!”

Quentin steps on Barnabas’ line when he says that no one has ever succeeded in destroying Judah Zachery’s head. Barnabas tries again, “Has anyone ever tried to destroy the — destroy the body?”

When the scene in Daphne’s room begins, there’s blue marking tape on the carpet.

The colorful afghan makes another appearance, this time on Daphne’s bed. We last saw it two weeks ago on Daniel’s bed, in the Collinwood tower room. By the way, if you’re starved for entertainment, try saying “Daphne’s afghan” a bunch of times in a row.