“How are we gonna explain carrying a coffin around?”

It’s got a wobbly, unmarked styrofoam gravestone. It’s got spooky stairs leading down to a story-productive secret passageway. It’s got a mystery box, containing a headless corpse and a gold mask studded with improbable jewels. It’s got the great visual hook of an eight-foot wooden cross, pinning down a forbidden coffin lid. It’s even got a hapless 1840 equivalent of Willie Loomis, unwittingly unboxing an evil from the past. This should be right up my street. So why am I so unhappy? 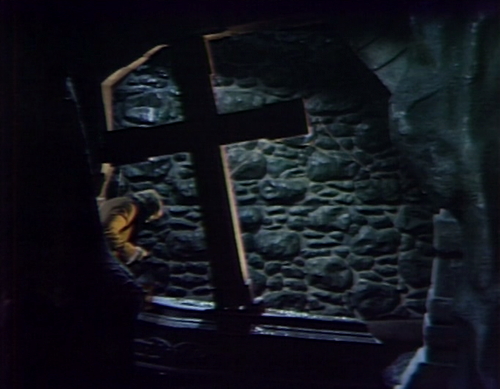 Well, for one thing, they keep blasting Dead of Night music at me. Dead of Night, if you’re not up to date on your 1969 failed TV pilots, was executive producer Dan Curtis’ 1969 failed TV pilot for a night-time series about a co-ed trio of professional ghost-botherers, which he shot on videotape, using the same production values as his cheap live-to-tape afternoon soap opera. It didn’t work out.

Bob Cobert did the music for the Dead of Night pilot, which mostly recycled his music cues from Dark Shadows. But Dan splashed out on one exciting new track, an opening theme that pushes the moody orchestration of Cobert’s usual work to a nerve-jangling new horizon.

If you’ve got the Complete Dark Shadows Soundtrack Music Collection, which you probably haven’t, this is music cue 316: “Head Music, Dead of Night theme”. They’ve been leaning on this track heavily for the past few weeks, and it’s making me contemplate suicide more often than I’m accustomed to.

The Dead of Night theme begins with a big splattery wet fart of a trumpet lick, which returns every twenty seconds or so, just to make sure you can’t get comfortable. There’s a constant nervous violin wobble, rising and falling in unpredictable patterns. Every once in a while, you hit a patch of Dark Shadowsy woodwinds, but then it gets lost behind jangly windchimes and a startlingly loud high-pitched whine from some instrument that I actually can’t identify. It’s carrying the main tune of the song, if you can call it that, but it only carries it for six notes before giving up, and letting the trumpet splatter and grumbling violins take over again. Then the tune starts over again, rising to a crescendo that never arrives, while someone runs a mallet back and forth over the vibraphone and the trumpet lets out one long blatatatatat.

It’s terrible, the world’s worst one minute and five seconds of music. It’s specifically designed to make you anxious and unhappy, which would be fine if it were played as it was intended, as the one-minute signature tune for a television pilot about to fall into instant obscurity. But instead, they play it twice in a row, for a minute and forty-five seconds straight, and then there’s the Dark Shadows theme, and then we go back to the show and they start the Dead of Night music over again for another minute and twenty seconds.

This is the aural equivalent of nerve gas, an area denial weapon that sends a clear signal to the audience that you should turn off the television and go do your homework.

And where is this supposed to be, anyway? It’s a weird underground basement storage room hidden underneath a graveyard, which is impossible. You need a bit of space downstairs in order to build a basement, and in a graveyard, “downstairs” is full of other people’s moldering caskets. You can’t really stretch out down there without running into somebody’s mortal remains. I suppose it’s possible that all the gravestones up at ground level are an elaborate false flag operation, but that seems like a lot of work and people would probably notice.

As I said, the enormous wooden cross is a nice visual hook for the space, although I’m not sure whether it’s supposed to be a bug or a feature. It looks like it crashed down from somewhere, but there’s no structure that it could have fallen out of. The overall sense is that this cross was intentionally wedged into this space, in order to stop Desmond from doing what he’s doing.

Desmond is here because he’s under the sway of a mystical severed head that lives in a glass case in his drawing room. The head wants Desmond to dig up its severed body, just for old time’s sake. He can’t be planning to do anything in particular with it, because it’s been dead for 148 years and is probably just a mess of bones and gristle at this point. Also, there’s a gold Inca mask in there.

I challenge any living person to explain the significance of the Inca mask. It’s sealed up in its own little compartment, which is easily accessed by simply flicking the cover off with your fingernail. It is apparently made of gold, and there are jewel-like stones covering most of the surface area, and also it’s got eyelashes.

Now, the actual head isn’t underneath the mask, because it’s in Desmond’s living room, so presumably the mask was left here in place of the head by the people who built this basement and wedged a giant cross over the coffin, for unknown reasons. I have no further information about the mask.

So I don’t know, maybe it’s the Dead of Night music, but I’m having a hard time figuring out what the producers of this television show are trying to convey. It feels to me like the mask is a failed bit of narrative collision, where they couldn’t think of another story to collide into, so they decided to grab a prop from an Uncle Scrooge comic book and hope that it means something.

Another reason why I’m not feeling super inspired by this plotline is that we don’t really know Desmond all that well. He’s a Collins cousin who lives in a nearby mansion with his mother, and brought the mystical severed head back from Macau to give to his best friend, Quentin. That is literally all of the information that exists about Desmond. We don’t know what he does for a living, or what he was doing in Macau.

But here’s one clue: he knows a drunk sailor named Tim who apparently beats people up for money. Desmond slips the guy a gold coin and says he has to come help with something, and when Tim asks what, he says don’t worry about it, just come with me and don’t ask any questions. This is what TaskRabbit used to be like.

When they get to the cemetery, Tim’s figured out that there might be something weird going on. “Listen,” he objects, “maybe this ain’t a good idea.”

Desmond stares him down. “You’re not scared, are ya, Tim?”

“You won’t tell me what you’re doing!” Tim says. “This ain’t like you, Desmond.”

But has he? So far, almost all of the Desmond scenes that we’ve seen involve the head hypnotizing him, and making him angry and cruel, but for all we know, that’s what he’s like in the first place. When he approaches Tim in the bar and shows him the coin, Tim says, “You want somebody beat up, is that it?” Maybe that’s a thing that Desmond tells people to do. What was he doing in Macau, and how did he know where to buy a severed head?

So that’s how things go, these days. Dark Shadows used to give you a couple days to actually know who the characters were, before they started in on the grave-robbing and henchman-hiring.

Think about Count Petofi and Aristede, Jeb and Bruno, Parallel Angelique and Hannah, Nicholas Blair and his rotating gallery of sidekicks. They all had their problems as characters, but there’s a noticeable difference with Judah Zachery and Desmond.

The other villains were all characters, with at least partly-recognizable motivations; they walked around in the world, and charmed people. They’d make a joke once in a while. The show invested time and energy in making the audience interested in the bad guys.

But the head is just a head. We’ve seen him open his eyes a couple times, and he said a few sentences to Desmond in a dream, but really it’s just a force of pure, unfocused anger.

Last week, Desmond — speaking on behalf of the head — shouted, “I kept telling them! Death was an extension of life! I kept telling them that!” But who was the “them” that Judah was telling, and how does that “them” relate to the four people he killed in Bedford, or the prospective people he’s planning to kill now?

So, sure, go ahead and kill Tim, if it makes you feel any better, but I don’t really understand what’s going on. Tim is tempted to steal the priceless Inca mask and forget the whole excavation, and the headless body gets up from under the cross and kills him and then walks away, leaving the mask behind, because I guess the mask didn’t really have a lot to do with anything anyway.

And here it comes, the extremely stoppable menace, stumbling into the night in search of eyes and a central nervous system. The mystery box opens once again, and disgorges another ancient evil, bent on the destruction of whatever it happens to run into. Darkness, thunder and the Dead of Night music, and here I am, entirely unmoved.

Trask tells Gerard, “He told me he came to England — came from England on a certain boat.”

Trask says that Leticia had a vision of the Old House, and Flora says, “But that is when the original Barnabas lived there, isn’t it?”

As a promotional gimmick leading up to the House of Dark Shadows release, Jonathan Frid and Nancy Barrett participated as judges in a nationwide Miss American Vampire contest which I wrote about in “The Summer of Our Discontent“. The contest winner was supposed to get a part in the show for a week, but the winner apparently didn’t want to do it, so instead the runner-up, Christine Domaniecki, slumps around the bar set for a couple of scenes and drinks out of other people’s glasses. You don’t really get to see her face very much, and they misspelled her name as “Christine Domaneck” in the end credits, but not everyone gets to be on Dark Shadows, so it must have been a pretty cool experience. I’m not sure what she did for the next thirty years, but according to her IMDb page, she became a makeup artist in 1999. She’s worked on a lot of movies, including Zoolander, The Royal Tenenbaums, A Beautiful Mind, Spider-Man and The Wolf of Wall Street, and recently created a “hand laid beard,” whatever that is, for Oscar Isaac in the upcoming film Life Itself. She attended a Dark Shadows convention in Norwalk, CT in June 2015.

Tim Braithwaite is played by Dick Sabol, whose other credits include a 1962 episode of Route 66, a 1967 episode of The Jackie Gleason Show, and a couple blaxploitation films (Cotton Comes to Harlem in 1970 and the 1972 sequel, Come Back Charleston Blue). He was also in the original Broadway cast of Promises, Promises and Stephen Sondheim’s A Little Night Music.

Judah Zachary’s body is played by Norman Parker in four episodes. Parker also appeared in March 1969, when Angelique showed Barnabas a vision of how his 1897 time trip would end — with an unknown figure (Parker) driving a stake into Barnabas’ heart. As it turned out, Parker was a stand-in for Charity Trask.