“I have to go back and try to change history, so that this terrible night couldn’t have happened!”

She calls herself a Collins; they usually do. She says that she’s from England, by way of Pennsylvania, which is just as good of a cover story as anything else. She’s Barnabas Collins’ daughter, apparently, and she’s also Barnabas Collins’ sister, and frankly, given the chance, she’d be his wife as well. It’s complicated. 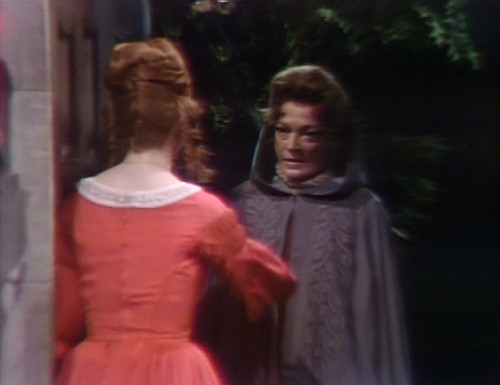 So here’s Julia Hoffman, using the time-tested time-travel trick adopted by all of the horologically diverse visitors who turn up at Collinwood at haphazard intervals. If you ever find yourself in a surprising century, the formula is to knock on the nearest door and pretend you’re an ancestor. It’s easier if you’re Barnabas, of course, because then you’ve got a portrait right there in the foyer that you can use like a driver’s license.

Julia doesn’t have that advantage, so she falls back on a popular strategy: blame the government. “I really meant to get in touch with all of you,” she says. “How embarrassing all this is. I did write! The posts are so bad, I only wish they were better.” If this doesn’t work, she’s going to try “fake news”, and see how far that gets her. 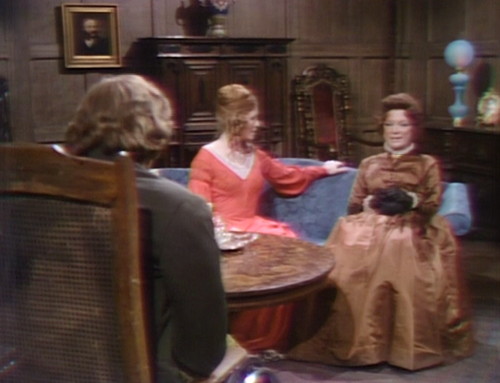 It’s always stressful when you meet the in-laws, especially if you’re an impostor and not actually part of the family in any way, but Julia’s holding up well. Samantha seems like kind of a pushover, but Julia also has to deal with Gabriel, who’s a poisonous viper, and Gerard, who recently in the future killed a lot of her friends and burned down two houses while she was standing in them.

She does fluster momentarily on sight of Gerard, but she holds it together, because if there’s one thing that Julia can do, it’s lie. Well, two things I guess, because the first one is finding her light. The second one is lie.

She expected her brother Barnabas to arrive before her, she says, armed with a letter of introduction and a face that looks like a portrait. She’s a cousin from England, which is why they’ve never met before, and she’s also a cousin from Pennsylvania, which is why she doesn’t have an accent. She might also be from a couple other places that she’s holding in reserve just in case she needs them. 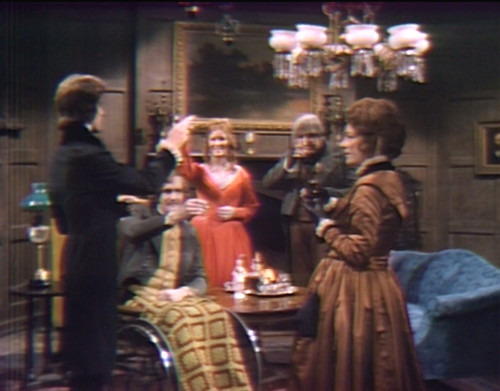 Fortunately, she’s got an accomplice on the inside, ready to noisily believe her story, which helps put things over. Plus, accepting her alias makes this another opportunity to pass the sherry around, and nobody at Collinwood can resist that. So they raise their glasses and drink to gullibility and mail delivery, as the boom mics swirl moodily overhead, buzzing suspiciously.

But it was never in doubt, really. This is Julia Hoffman, the woman who was exposed as an impostor back in April 1968 and was then issued a permanent parking space in an upstairs bedroom. If anybody knows how to talk her way into Collinwood, it’s her.

Because Julia is a smart character, and they’re always welcome. She’s allowed to live perpetually onsite because she can move the plot along, in ways that the Collins family members never seem to quite manage. Smart characters can’t be put off the scent; they investigate, and get into trouble. That’s why she’s finally been upgraded to main character, and now she’s the one traveling in time.

Julia is the Doctor, currently engaged in the Second Great Time War. The walking dead men have jumped forward to the future and destroyed her home planet; now the War Doctor has the awful responsibility of circling back, and destroying theirs first. 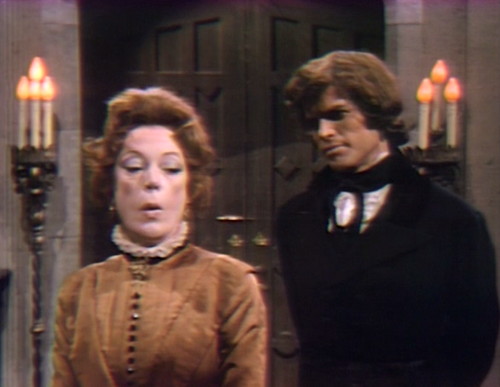 Obviously, the hero can’t carry this story on her own; she needs a worthy adversary with smart-person powers of his own. There’s another mad renegade in this story: Gerard Stiles, the dark twin of the Doctor. He’s also insinuated himself into the house under an assumed name, and he can recognize a fellow mendacitist when he sees one.

Gerard’s been carrying an aberrant earring around in his pocket, a careless clue that Julia dropped in the playroom a couple episodes ago. Gabriel found it and passed it on, and now Gerard is musing on the mysterious Julia Collins, when she returns to Collinwood from a suspicious early-morning walk to the cemetery. This is his opportunity for a fishing trip.

“Any news from your brother?” he asks, and she says no. “You must be terribly worried about him,” he observes, and she says yes. This is the traditional opening move.

Gerard:  Tell me, how long has it been since you’ve seen your brother?

Julia:  Not since I came to America, I miss him very much.

Gerard:  I see. Tell me, where do you live in, uh — Pennsylvania, yes?

Julia:  A farm, just outside Philadelphia. I’m something of a recluse.

Gerard:  Ah, I hope not so much that you don’t remember the famous restaurant on Chestnut Street —

Julia:  I never go to the city.

Gerard:  Pity. You miss so much.

They’re always recluses, these cross-time impostors, who have been nowhere, seen nothing, and known no one. She’s done this before. 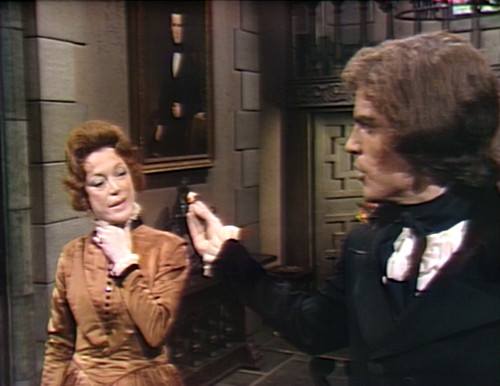 “By the way, Miss Collins,” he columbos, “I have something that belongs to you.”

“Oh? What?” she asks, and then he brandishes the earring.

“My –” she begins, and then catches herself. She has a split-second to come up with a recovery, which she does. Split-seconds are the appropriate unit of time, when she’s lying.

“My word,” she continues. “What is it?” He says it’s an earring. “Really!” she coos, as if this is a brand new experience. “Such an unusual design!” 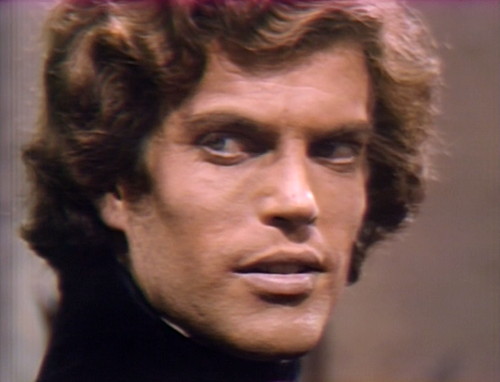 “Isn’t it?” he retorts, and he can’t resist just the hint of a smile, as he admires a colleague’s skill. “I found this in the playroom, the night before last.”

She adopts a sarcastically innocent tone of voice, signaling that she knows what he’s up to. “But I wasn’t here, why would you think it would be mine?”

“Because there’s another one just like it on your dresser!” he retorts, and that’s it, he’s lost the match. This is how the Doctor operates — she provides an opening, and the monsters fall into their own traps. Now he’s giving her information, which is the opposite of how he wanted this to go.

“Why were you in my room?” she snaps, and he gives away more intel.

“I brought your luggage in from town,” he explains. “One like this was on your dresser. Now, this can’t be a coincidence, can it, Miss Collins?” He paces toward her, and grabs her arm. “Now, tell me,” he thunders, “who are you, and what do you want here?”

She makes a face that leads into a cliffhanger, but she’s clearly winning on points. He’s answering more questions than she is, and he’s the first to raise his voice. 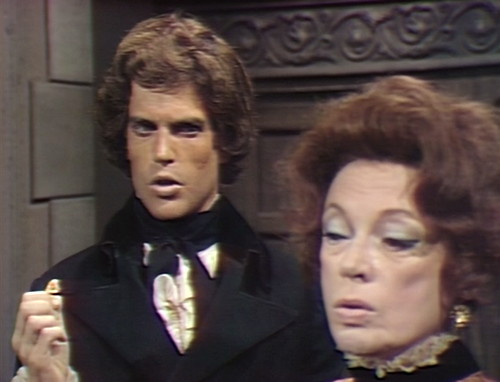 And then he just keeps telling her every fact that he knows. Observe the technique.

Julia:  What right have you to question me?

Gerard:  Would you prefer Gabriel Collins to do it? He was the one who found the earring. He’s as interested in this as I am. Daniel Collins says there was a woman in the room, the night the earring was found. Now, was it you?

That’s two more pieces of information that he’s given up, for zero of hers. Julia is amazing at this.

Julia:  I arrived this evening, you know that. I’m not accustomed to strangers doubting my word.

Gerard:  When Gabriel showed me this, I had a feeling that it belonged to a woman who did not dress as a woman ought to do.

Julia:  You’re a psychic, too?

And oh my god, dude, get it together. Julia’s using the greatest trick in the impostor arsenal: invoking social norms to make her challenger uncomfortable. “What right have you to question me?” and “I’m not accustomed to strangers doubting my word” are specifically designed to remind him that she outranks him. She might as well call him an upstart. 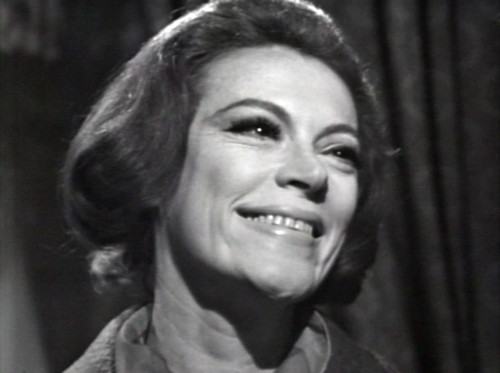 And then she pulls out that irritatingly disarming crocodile smile, which is the last thing you see before the Hand of Omega wipes out your homeworld.

“Well, whatever your interests,” she needles, “I can answer your questions about the earring very easily.” He just stands there, stiffening as he waits for the banana cream pie to fly into his face.

“It was on the bureau when I went into the room.”

And that’s it. The game is over. 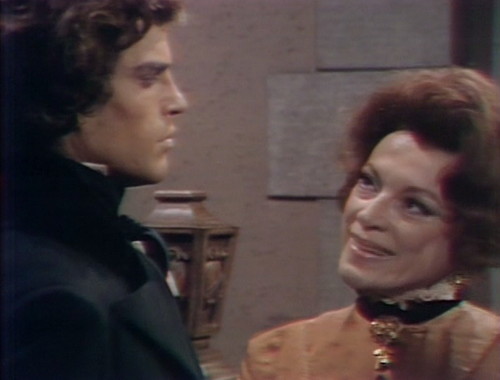 “Nobody has been into that room since all the time I’ve been here,” he says, “and that’s been several months.” But his heart isn’t in it; he knows what’s just happened.

“I meant to call it to Mrs. Collins’ attention,” she says, and then gives a little chuckle designed to stab him directly in the heart. “But you can do that now.” She cocks her head, and does a victory lap. “There’s no way of telling how long it’s been there, is there?”

“No, there isn’t,” he says, and he wants to exterminate her, more than he’s ever wanted anything before.

“Well, I’m afraid you’ll have to solve the little mystery yourself,” she chirps.

And then he takes the long walk upstairs, wondering if he knows anyone who could get their hands on a reality bomb.

Julia tells Ben, “I was hoping to see you, so that I could hear more stories about Father, when he was young. My brother and I used to listen to how Collinwood was, then.”

The mic cuts out at the end of Gerard’s line: “I’m afraid I’m only interested in — [the living].”

Barnabas tells Stokes, “She opened the door, and the stairs was there.” 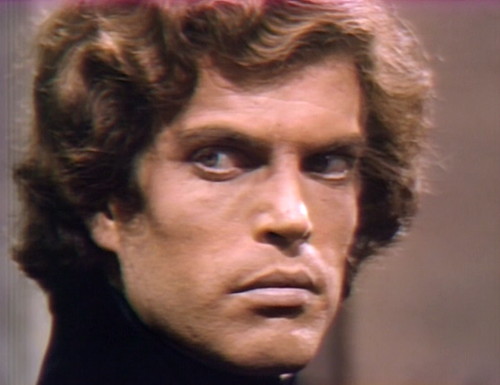