“She says, in the future, you can send your spirit back in time!”

It always starts with a box.

Let me try to explain. I woke you up, because you’re going to be a friend of mine someday. So I’ve opened your box, in the hope that the you of the future has projected back through time to replace the you of now. Does that make sense?

You see, what I need to do is get in touch with the you that’s going to wake up then, so we can do the stuff that you and I need to do, and when we’re done, you’ll put yourself back in the box, so that in the future, you can get out of the box again, and become the you that I know. Then maybe you can come back in time and help me explain this, because I can tell that this is not getting through.

Look, this really isn’t that difficult. Is there a supervisor around that I could talk to? 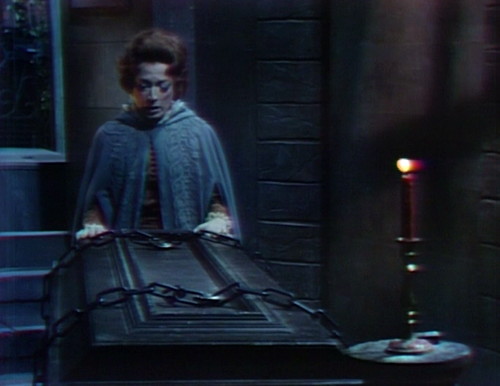 So this is what happens when you spend every day for four years writing the weirdest things you can think of. At a certain point, you accumulate so many absurdities that you start to take them for granted. Then you can pile them all up on top of each other, and pretend like there’s no such thing as gravity. This is how you end up with a Crisis on Infinite Earths, you keep doing this long enough.

Here’s mad scientist blood specialist gal pal Dr. Julia Hoffman, having traveled to 1840 by way of a magical staircase. She’s here, in the secret room of the Collins family mausoleum, because she suspects that her longtime vampire companion has probably used an ancient Chinese divination technique to send his astral body backwards in time to inhabit his own corpse.

The only part of that cockamamie concept that’s not one-hundred percent correct is that she’s a week early. Other than that, she’s spot on. 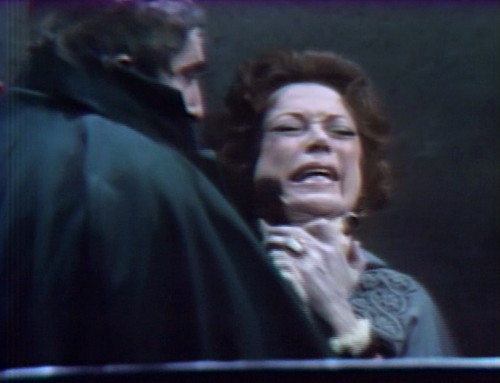 And this is always how it’s going to go, when you adopt a wild animal as a pet. I know, they look cute, but eventually it’s going to get confused about the difference between friend and food. It’s not a betrayal, it’s just the way that predators work. A housecat only looks cute because it’s smaller than you; to anything rat-size and down, your sweet little baby is a 24-hour nightmare death machine. You can even shine a laser pointer at the wall, and all of a sudden your pet wants to destroy light. The only way to survive in a hostile environment like that is to decide, once and for all, that you’re going to stay human-sized.

To be frank, Julia doesn’t have much of a chance here. The previous time Barnabas got out of the box, it took two hundred and sixty episodes before he decided that he didn’t want to kill her. That’s the all-time record.

This time around, it takes eighteen seconds from the time he opens his eyes to the time he grabs her throat. If this goes by the form book, she’s going to have to tread water for another two hundred and fifty-nine episodes before she has a chance of surviving this conversation.

“You know my secret!” he snarls. “No one must know my secret!” You can hardly blame him for being grouchy. The last thing he knew, his father was locking him away for eternity; now all of a sudden there’s tourists. Besides, he hasn’t had his coffee.

But Ben Stokes is here — faithful old Ben, who’s spent the last forty-five years growing older, as people do. He believes Julia’s story about the future, as crackpot as it clearly is, and he brings Barnabas to heel.

The vampire recognizes his retainer, and paces towards him. “How old?” he gasps, astonished. “How old?” This is not particularly tactful, but it’s been a rough evening. Besides, Ben’s heard worse.

“How long?” Barnabas urges. “How many years?”

“Mr. Barnabas, it’s — 1840,” Ben replies, and oh, the look on Barnabas’ face, it’s almost worth digging him up and letting him strangle you.

“My god!” he gasps, and looks down at his hands.

“The same…” Barnabas intones, and the hollowness of his voice takes you back to good old 1968, when being a vampire really was a curse, rather than a set of convenient magic powers. Jonathan Frid is playing the Barnabas who still thinks that things are partly his fault. 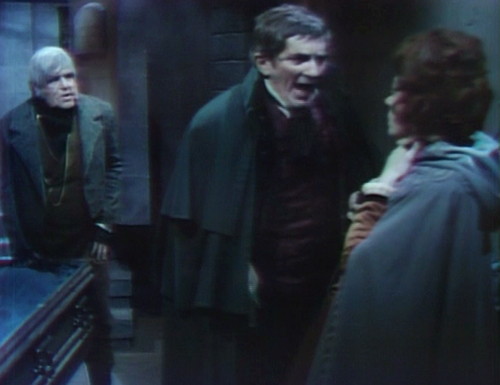 And look at that, for a shot. I haven’t been crazy about the direction lately, especially the misguided ultra-close-ups, but that’s a well-framed scene. People were saying that things would get better once we got to 1840, and they were right, things have. 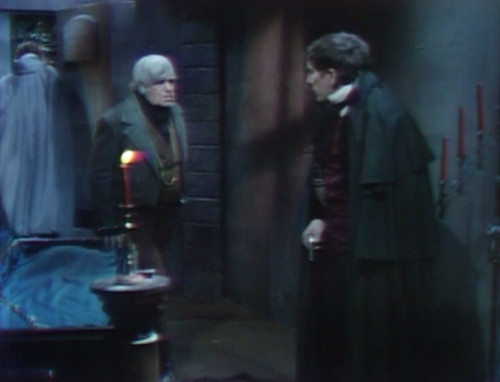 And then twenty seconds later, Barnabas and Ben act out one of the great blocking fails of all time. I’m going to have to slow things down, in order to give you the full experience.

Ben shoos Julia out of the crypt, and then approaches Barnabas.

Barnabas has a lovely tormented close-up, as he cries, “She’ll tell my family, my father!” and the back side of Ben leans into the shot, completely obscuring his face. 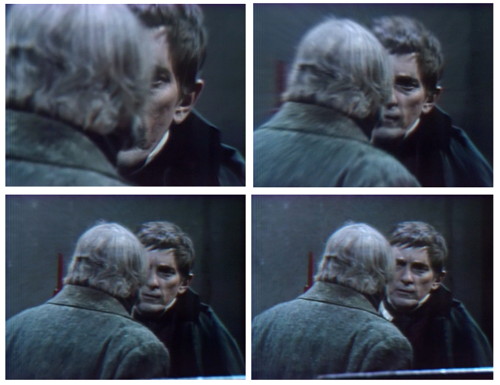 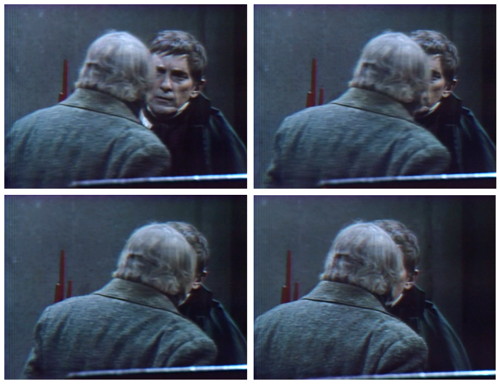 And then Ben, trying to be helpful, leans to his right, and blocks Barnabas again.

So they cut to another camera, which is out of focus. And there you have it, the perfect scene. It’s just that easy.

Meanwhile, Ben is trying to explain Julia Hoffman, which is a challenge even in the best of circumstances.

Ben:  Mr. Barnabas, listen to me! Her story’s strange — maybe you can understand it better than I do, you always did. She said she comes from another time — the future! She says she knows ya there!

Ben:  More than a hundred years from now — someone will come, and let you out of your coffin!

Ben:  Mr. Barnabas, I believe her story! She says in the future, you can send your spirit back in time!

So how’s that, as a wake-up call? Barnabas has been out of his box for two and a half minutes, and he’s getting a sneak preview of how batshit insane his life is going to get, in the twentieth century. And H.G. “Violet” Wells doesn’t even write The Time Machine until 1895; these people have no context for any of this crazy. You might as well hand him an iPhone, and tell him not to run the battery down.

But just-released Banabas doesn’t need to understand anything; he just has to feel sad and self-destructive, and then go outside and do something terrible.

“This curse,” he breathes. “This curse! I need blood! I cannot stop it!” And you know how that story goes. Barnabas is young again, and dangerous, and predictably unpredictable. Julia has loosed something upon the world that can’t be unloosed, not even with a crossbow loaded with crosses. The madness that began with Victoria Winters’ unlicensed time travel has been steadily accelerating, and there’s no way to stop it. To be honest, I don’t even want to try.

While Julia works on the last chain, the boom mic hovers overhead. You can glimpse it again as Julia leaves the secret room.

Barnabas was facing the other way when Willie opened his coffin in 1967.

Barnabas walks out of the mausoleum, and he has to brush a branch out of his way.

When Samantha’s walking in the woods, Barnabas is visible before he’s meant to be seen, which reveals the camera trick they’re about to do which will make it look like they’re shooting Barnabas from the other direction.

Just after Gabriel says, “Are you sure it was a man, Samantha?” a man walks into frame, carrying a script. They’ve been really sloppy with framing, this week.

Gabriel announces, “A woman was seen — was found, on the road near the cemetery.”

Samantha is slightly off-mic when she tells Julia, “Gabriel is the authority on the Collins family.”

When Ben opens the secret door in the mausoleum: another boom mic sighting. I don’t know what’s wrong with the boom mics this week; they’re everywhere.

When Gerard shows Julia the earring, he says, “I found this in the playroom, la — nast — the night before last.” Then he says, “This was on your dresser — one like this!”

This isn’t a blooper, more of a “fridge logic” moment: Gerard says that he brought in Julia’s luggage from town. Where does Julia get luggage from? Ben has helped her find some clothes to wear, but how many outfits can he rustle up at short notice that aren’t stolen from other people in Collinwood? She can’t wear or carry anything that someone at Collinwood might recognize, so it all has to be sourced off-property.