“What happened to you in the future was the result of what’s happened here!”

Man, never underestimate the power of a soap opera instaromance. The flame that burns twice as bright burns half as long, and vice versa, and the only people who get burned are the audience. Dark Shadows’ greatest flaw, except for all the others, is that they’re not very good at love stories, so characters tend to clump together haphazardly in corners.

Today’s for instance is fraud horoscopist Sebastian Shaw, who went on one date with Maggie weeks ago, and has now decided, on her behalf, that he’ll kill his vampire overlord Roxanne to spare Maggie from the series of vamp attacks that I’m not sure anybody ever actually told him about.

But who needs motivation when you’ve got silver bullets? It turns out there are armed astrologers in the Dark Shadows Extended Universe, although the gun control laws are particularly lax in Collinsport, and Sebastian probably just picked up his piece at the corner bodega, next to the Jarritos Mandarin sodas.

Then, unexpectedly, Roxanne is spared by the intervention of phantom entrepreneur Gerard Stiles, who apparates in silence in the secret chamber in the nick of time, and distracts Sebastian at the crucial moment.

Sebastian fires off two bullets in Gerard’s direction, which pass right through his intangible torso, and fall harmlessly to the floor. Apparently Sebastian doesn’t concern himself with collateral damage during hunting season; he’ll shoot at anyone.

But Roxanne is spared, anyway, because it turns out Gerard is actually the hero of the show. At least, he’s the only one who gets anything done around here. 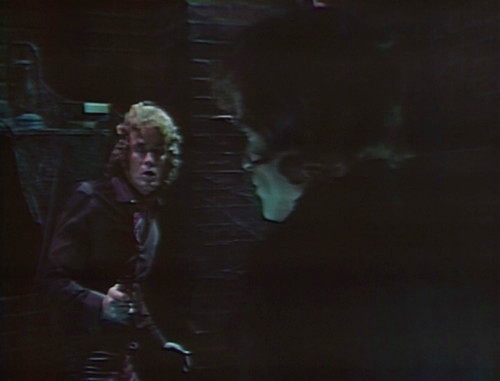 I couldn’t tell you what Gerard’s interest in Roxanne might be; they try to gin up some connection dating back to 1840, but it’s shallow and unconvincing. It doesn’t matter; Gerard has no need for explanations. Gerard is involved with Roxanne because Gerard is involved with everything today; his fingerprints are all over the next twenty-two minutes from start to finish.

“Quentin’s not in this time now,” Daphne says later on, after the poison and before the shovel. “He lives in Gerard’s!” We all do.

And here’s Sebastian Shaw, demonstrating why Christopher Pennock characters never really caught on. He loves Maggie, he says, and he hates Roxanne, and then he rips off his little bandana and shows off the vamp marks on his neck, like he’s proud of them. This violates many of our imaginary rules about how vampire blood slaves behave, but most of the time the victims are women, so maybe it’s different for guys. Sebastian is breaking the glass ceiling, and everyone around him is struck by falling shards.

Barnabas comes in and asks what all the racket is about, and Sebastian thinks that he deserves an explanation for Barnabas hiding a chained-up coffin behind a bookcase, as if he’s not the one breaking into the house and shooting off firearms in enclosed spaces at insubstantial targets.

“Why did you bring her here?” he asks, and Barnabas answers, “It’s no concern of yours!”

That’s basically how it’s going to go today, as far as questions and answers are concerned. Lots of people ask lots of questions, and the answers they get are few and unsatisfactory.

For example: “What do you think, that I’m going to stand here and wait until Gerard comes to kill you?”

That’s Quentin talking to Daphne, and the answer is supposed to be no. You’re not going to stand there and wait. You’re going to pour me a drink and wait. 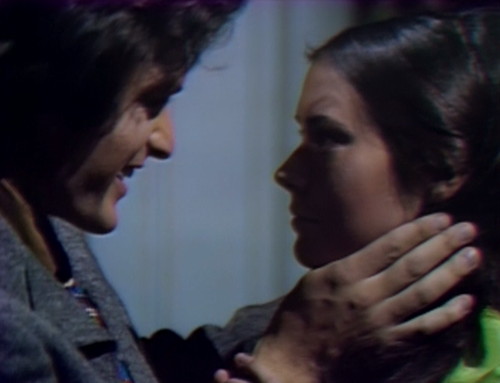 Daphne says that she doesn’t want to leave Collinwood, but she’s from the 1840s, so she’s accustomed to not getting a vote.

“Listen to me,” Quentin says, romantically spinning her around and holding her tenderly by the throat. “Do you think he can stop me from taking you now?”

She looks downcast, and he lifts her chin, like he’s a boy in a playroom, posing his Daphne doll. “Come on, I want to see a smile on that face,” he says. “Now, pack that suitcase!”

“To our life,” Quentin says, as she clinks her glass against his, and allows herself a tentative smile. You would, too, with Quentin zero inches away from you, staring into your eyes and promising you everything. Daphne is not aware of Quentin’s track record, re: going away together with women that he says “we’re going away together” to.

And, WHAM! One sip, and down they go. Fans of tragic love stories will be pleased to know that the tragic part of the love story has commenced.

And there’s Gerard, the ghost with the most, doing whatever he wants.

At this juncture, we ought to spare a moment to discuss Gerard’s plan, which is obscure to the point of absolute darkness. He spent a lot of capital on getting the children to turn into the other children, and then he pressured those children to wish on a star and bring Daphne back to life. Then he tried to burn a house down, with Daphne in it.

“What do you think,” Quentin said, “that I’m going to stand here and wait until Gerard comes to kill you?”

But it doesn’t matter where you stand, here or anywhere. He’s going to kill you anyway. He enjoys it. This is leisure time for him.

And here’s Ophelia, descending a staircase. Barnabas sprints over to Collinwood for reasons unknown, and runs smack into Carolyn, who may be Leticia and is dressed for mourning. This is one of Gerard’s pet marionettes, a Carolyn changeling who’s even more crazy than the officially crazy 1995 version.

“Carolyn, have you seen Quentin?” Barnabas asks, and then notices the couture. “Why are you dressed in black?”

“How else should I be dressed?” she grins, sideways. “There will be a funeral tonight.” There is no tangible reason why Gerard should be pulling Carolyn’s strings like this; it would all turn out the same if he didn’t. But it’s his play, today.

She’s a strange, witchy woman, this chaotic version of Carolyn, and it’s hard to tell what she wants and whose side she’s on. Barnabas asks her to second sight for Quentin, and she gives it a shot.

“Why did I ever think you were my enemy?” Quentin says,

as Gerard smiles his satisfied smile, 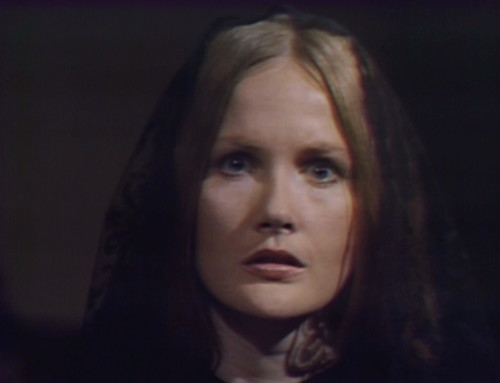 and then it’s back to false Carolyn. That’s how fast it happens, a fourteen-second scene where

the threads just dangle and tangle.

“Carolyn, everyone’s lives are at stake — even your own sanity!” Barnabas cries, and the world cries with him. “What happened to you in the future was the result of what’s happened here! Now, you must stop what is happening!”

“I cannot stop anything,” she replies. “Whatever gave you the impression that I could?”

He gives her a dramatic stare. “I will find Quentin!” he vows, and he will, but not today.

#4. Where did he take Quentin?

Julia needs to pick a question, and stick with it.

“Quentin’s not in this time now,” Daphne murmurs, her spook senses tingling. “He lives in Gerard’s!”

And then there’s Quentin, standing there and waiting until Gerard comes to kill him. He’s entirely under Gerard’s control, and there’s no reason to spin this out, but Gerard wants to play with his food.

“Why is this grave unmarked?” Quentin asks. “Why can’t I remember?” But it’s not Quentin now, it’s his grand-uncle Quentin, coming home to roost. “I don’t understand what’s happening to me,” they say. “Why do I know these things?”

And then Gerard touches him, and smiles, and the world is full of cunning.

“When I look at you,” the Quentins say, “it all doesn’t seem so strange.” He gazes into the eyes of the most important person in the world.

Come on, I want to see a smile on that face. Do you think he can stop me from taking you now?

And it turns out that maybe this storyline has been an equilateral love triangle between three ghosts. You don’t see that kind of story very often, because it requires extremely attractive ghosts, which are hard to come by. 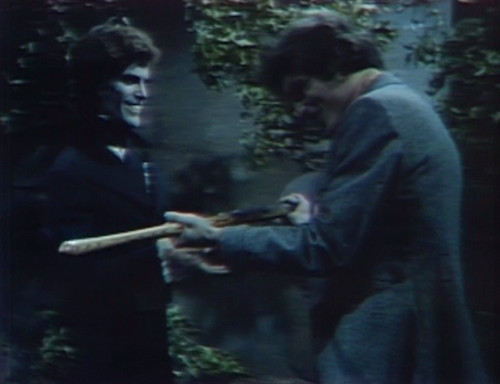 “But this grave…” Quentin wonders. “Why does it puzzle me so?”

It was Gerard, obviously; it was him the whole time. Gerard, with his power and his smile and his intermittent but palpable hotness. Gerard was holding this together all along, the character with the clearest motivations and the most obscure tactics.

Quentin’s all moist and sweaty now, out here in the boneyard. Getting yourself buried is an aerobic activity.

“That coffin,” he says, regarding the coffin. “Yes! That’s Quentin Collins’ coffin. It is his, I know that!”

And then there’s Barnabas and Julia. Remember them? They’re the only people in this episode who aren’t possessed by someone else, and they have no idea what’s happening.

They’re just shuffling back and forth between unhelpful people with the power of picture-in-picture remote viewing, who won’t explain anything to them. Quentin is dying, Carolyn is gone, the children are missing, Gerard is in control and they don’t even know where to look. They might as well be ghosts themselves. 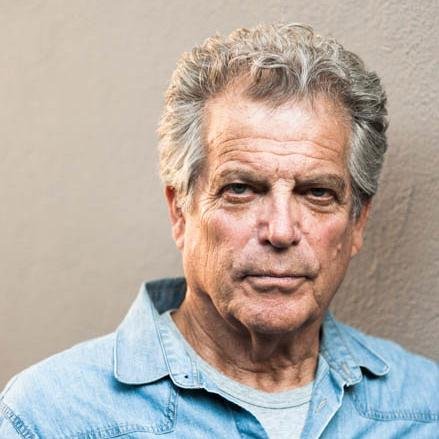 And what is Roxanne dreaming of, lost and forgotten behind the bookcase?

Why did you bring her here, why are you dressed in black, why do I know these things, why does it puzzle me so? 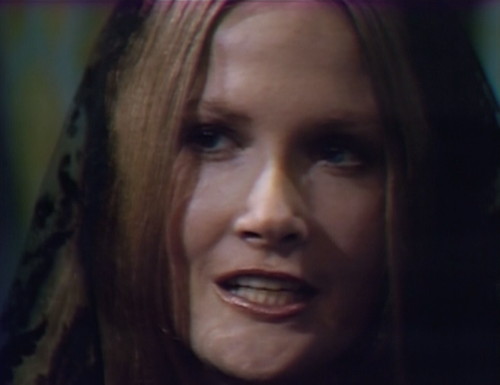 You and Julia — I pity you, you think you can change everything! You can’t!

Gerard will wave his green flag! No one can stop that! 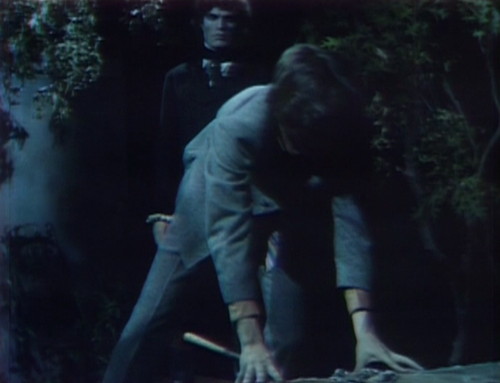 Gerard is the ghost writer, handing out parts.

“The coffin — it’s empty! It’s empty because Quentin Collins was supposed to be buried there in 1840, but he wasn’t, and — and you know, I keep forgetting why!”

“You are death,” Quentin sighs. “Whatever made me think that I could run away from you?”

What happened to you in the future was the result of what’s happened here! 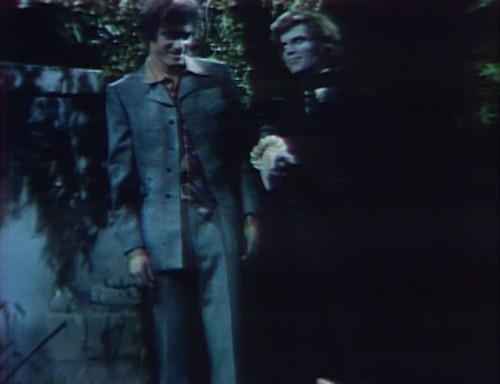 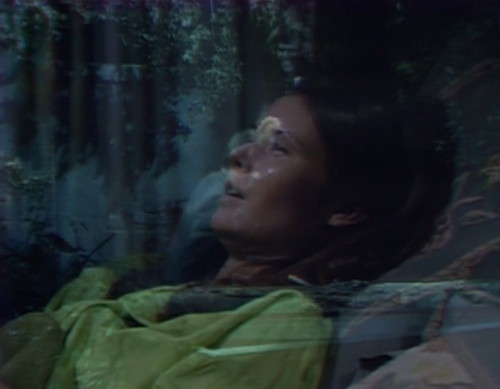 Tomorrow: The Way Out.

There’s a weird, unintended vocal effect at the end of the sentence, when Sebastian shouts, “I wanted to end it. But he wouldn’t let me kill her!”

Barnabas tells Sebastian, “It’s no concern of yours! Just know that you not try to — you must not try to destroy her!”

In act 1, Barnabas has to hustle from his scene with Sebastian behind the bookcase to his next scene with Daphne in Josette’s room, a transition that he has only fifteen seconds to achieve. As the first scene fades out, you can see Barnabas hurrying behind Sebastian to get to his next mark.

On the end credits roll, there’s a smudge over the videotape editors’ credit.

There are a lot of scenes in Josette’s room today, but most of the time everyone stays on the right side of the set, and they use the interior door on the right as if it’s the door to the hallway. (Barnabas, Julia and Carolyn all enter from the right-hand door.) At first, I thought they didn’t have enough studio space to build the left side of the set, but in act 4, Daphne moves to the left, opens the door a crack and then quickly shuts it. My guess is that there isn’t enough room on the left for people to enter; there may be another set that’s just on the other side of the door.

Tomorrow: The Way Out. 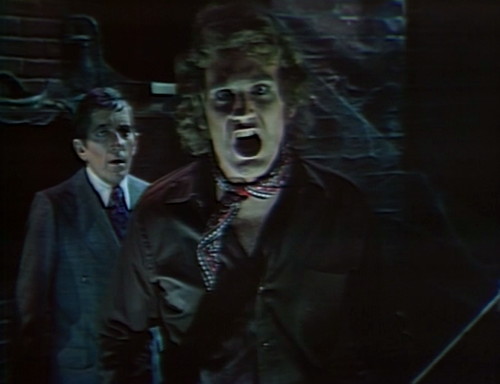