“Why do I always have to be the one to talk sense?”

I know that this will be impossible for you to believe, but everything I tell you is true.

Months ago, on a plane of existence that you’ve never seen, you and I fell madly, hopelessly in love. All it took was one look at you, unconscious on the table of the mad scientist who was using you to animate his murdered daughter’s corpse, and I knew that I couldn’t go through with my plan to stab you while you slept.

You were like a perfect china doll, pure and lovely and utterly helpless. You couldn’t be another casualty in the endless occult space war that I wage against my ex-wife in multiple dimensions. I spared you from the brutal execution I’d planned for you, and that is why you love me.

When I carried you from the house, you were silent and remote. I brought you to a secret room in a deserted mausoleum, and watched as you moved about the room, reacting to objects that you recognized. Then I took you to my home, to my own basement, where I hooked you up to several machines and worked tirelessly on your behalf. Even though you had been cruelly used, I didn’t bring you to the hospital or the police, because they could never understand the special connection between us.

There was another man in your life, my dearest, who tried to ensnare you with his hypnotic control. Happily, my hypnotic control over you was stronger than his, allowing you the freedom to choose the man who deserved your love. He saw you as a plaything, an object that he could own, but I knew the truth — that you were mine, forever, from the moment I saw you. Shortly after this, he was murdered, and I buried his body in the woods, so that the police investigation would no longer be an impediment to our love.

How can I descibe the agony I felt as you burned, in that ghastly fire? You screamed my name, begging me to rescue you from the flames. That was the last time that I saw you, my love, and you cannot imagine the suffering I have experienced.

My name is Barnabas Collins. I am the most dangerous person that you have ever met. This is our love story. 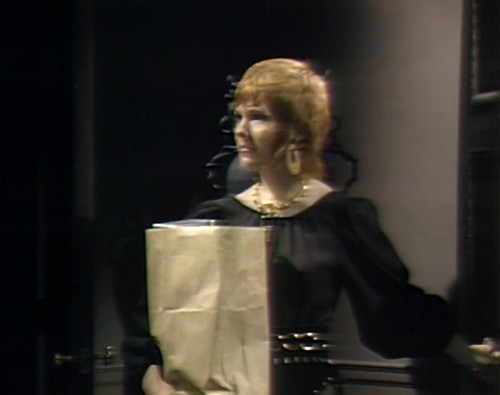 Once again, we learn that you should never underestimate a storyteller’s ability to surprise you, if he really, truly has no idea what he’s going to do from one moment to the next. The sky’s the limit. At least, that’s my interpretation of this new chapter in the saggy love saga of Barnabas Collins and Roxanne Drew.

It’s early days — she’s just walked in the door, according to the screenshot directly above — but I feel confident in saying that the writers don’t have a single clue about what they’re doing with this character. How is she related to the Roxanne that we briefly knew and cheerfully discarded at the end of the Parallel Time storyline? What role does she play in the current struggle against the ghosts of Gerard Stiles and Daphne Harridge? Is she the true, destiny-approved soulmate that Barnabas jumped to the conclusion of, two months ago?

Those questions cannot be answered, because the show has drifted away from all known rules of narrative. Characters no longer have motivations; they just have attitudes and props.

But she’s friendly, this new Miss Drew, you can say that for her, plus she doesn’t speak in that weird Parallel Time jungle girl patois — “I am afraid when I am not with you,” she said — so that’s a plus. Beyond that, I can’t help you.

Roxanne:  Who are you?

Roxanne:  We haven’t met, and yet you know my name. How?

Barnabas:  I knew someone exactly like you, but in another time. Her name was Roxanne — Roxanne Drew.

Roxanne:  But that’s my last name! Where did you say you knew this girl?

Barnabas:  Very near here… but in another time.

Roxanne:  Another time? Well, you mean many years ago.

Barnabas neither confirms nor denies this interpretation. It’s nice when people can supply their own explanation for whatever crazy thing comes out of Barnabas’ mouth; it saves wear and tear on the vampire.

But this version of Roxanne is primed to accept almost any bafflegab you throw at her; she works with Sebastian in some capacity, and he’s an astrologer, a line of work where you spend half your time making up meaningless jargon, and the other half scolding your clients for not appreciating the purity of your calling.

So the idea that there was another Roxanne Drew absolutely delights this girl; she practically runs a lap around the living room.

Roxanne:  Incredible! Sebastian has told me about astral twins!

Roxanne:  Yes! People who are born in different parts of the country — usually at the same exact moment! Their horoscopes are the same. Very often, they have similar names! Their lives parallel each other to every detail! I never thought I had an astral twin!

This is a world where ghosts conspire to steal the bodies of their descendants, where grieving lovers call their departed spouses from the grave, where secrets are revealed in dreams and buried in basements, where death himself pauses to spare the life of a beautiful young woman who emerged newborn from an artist’s sketch pad. And even here, in the Upside Down, this “astral twins” thing sounds like bullshit.

Barnabas and Roxanne go on to have a conversation about the current plotline that isn’t currently germane, so I won’t trouble you with it. Then he turns on the charm.

Barnabas:  Roxanne… can we discuss this further?

Barnabas:  But I want to see you again. I’m fascinated by the idea of astral twins! We have much to discuss. Can I see you again?

Barnabas:  Are you free later this evening? We might have a late dinner.

It’s two o’clock, by the way, according to the clock on the mantelpiece. It stays in shot for a while, too; that is an unequivocal two o’clock. I don’t know why this happens on Dark Shadows as often as it does. They can clearly see that the clock is in the shot, and it would be the work of a moment to turn the hands to seven-thirty. But no.

Barnabas:  I’ll pick you up at ten.

Roxanne:  No, I’ll meet you there.

Barnabas:  Until ten, then.

He kisses her hand, clicks his heels three times, turns into a bat and flies away, leaving us with a single question: Where did you just agree to meet, exactly?

But this is what happens when you leave yourself open to Roxannes in your life; the shape of your day gets irreparably twisted. At that point, there’s only one force in the universe powerful enough to save us: Julia Hoffman’s eyebrows.

Julia gets involved when she takes a message from Roxanne, who calls to tell Barnabas that she won’t be able to join him for dinner tonight — possibly because it’s two in the morning, and the next available suppertime is two ten o’clocks from now.

Julia knew Roxanne in Parallel Time too, and she’s aware of the entirely hairbrained romance that Barnabas thinks he cooked up with original flavor Roxanne. (“I know why you follow me!” said the jungle girl, offering up prayers to the river god.)

So Julia is super not impressed when Barnabas comes home and starts gabbling about how he found another lookalike girlfriend. “Julia!” he cries. “The most incredible thing has happened! Roxanne –”

“I know,” Julia says. “I know, you found her.” She’s dealt with this kind of thing before, and she knows that it usually ends with a trip to Home Depot, to get a shovel and a whole mess of paper towels.

“Well, I assume she is, but she’s not the same person.”

He insists, “Julia, from the few times I’ve been with her, I know that that’s Roxanne!” He’s only been with her once. Maybe he’s counting each minute as a separate encounter.

“Why do I always have to be the one to talk sense?” she sighs. This is going to take a minute; talking sense to Barnabas is a lengthy procedure.

She puts on one of her eighteen patient facial expressions.

“Barnabas,” she says, “do you remember me, in Parallel Time?”

She looks him square in the face. “I am not the same person as that Julia Hoffman.”

“That has nothing to do with it!”

“It does!” It actually does. “You do not know this Roxanne.”

And, oh, the look she gives him.

“All right, Barnabas,” she says. “We’ll just have to wait and find out.” Then a car explodes behind her.

He goes back to see her, of course; for Barnabas Collins, a broken date is an invitation to try even harder. She says that she’s not free to go out, and she never will be. She offers him her hand to shake. He kisses it, indicating that being free is not a factor.

“We shall see each other again,” he says. “I assure you of that.” The clock behind him still says two o’clock, of course, and in our hearts, it always will.

The opening narration calls Sebastian an “astrologist,” a word that they also used yesterday. It’s possible that this is an actual alternative term, but I refuse to accept it.

Barnabas says to Roxanne, “Well, since that — you work together, perhaps you could finish it yourself.”

When Barnabas enters Collinwood and hangs up his coat, he says, “Ah, Julia! Did you have any luck with the, uh,” — one mississippi, two mississippi, three — “with the records?”

The camera pans from the boy mannequin to Hallie, and we can see the blue screen on the window behind her, just before the Chromakey effect. 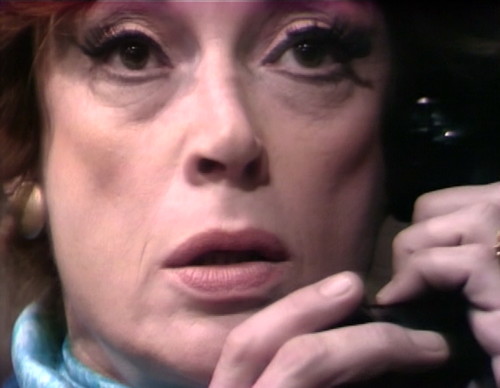