“I was concerned, because people that are highly sensitive are usually very receptive to supernatural phenomena.”

And on top of that, she’s psychic, too, so now we have another reason for Hallie Stokes to stand around looking breathless and unwell, and we don’t even get a weird theremin sound or the scent of lilacs or anything.

“You know those strange feelings I get sometimes?” she says, so here we go; it’s one of those. Hallie’s telling Quentin about unexpectedly running into Barnabas and Julia in the hall earlier this evening, an experience which has shaken her to the core.

“I guess the reason I was frightened was the way that they looked at me, and talked to me,” she grouses. “They said things that made me think that they’d seen me someplace before, and I know I’ve never seen them before!” She tries to catch her breath, which appears to be a constant pursuit. “But then when I brought them downstairs, I had the awful feeling that something terrible was going to happen!”

But something terrible is already happening, thinks Quentin. It’s you.

Barnabas and Julia were on vacation for a couple months, seeing the sights of a parallel dimension and a post-apocalyptic nightmare future, and you know what happens when you take your eye off Collinwood for more than five minutes; another monster moves in.

Hallie Stokes is a new resident at this no-kill shelter that the Collins family appears to be running, for the benefit of orphan girls with lookalike ancestors. She’s the niece of Professor Stokes, who’s apparently been on the show long enough to park his relations wherever he likes.

I’ve been saying recently that Dark Shadows is approaching a thermodynamically problematic state where not enough new energy is entering the system, leading to entropy and stasis and the heat death of the universe, and I suggested going out and finding some long-lost relatives to spice things up. But I specifically placed an order for one of Quentin’s sexy illegitimate children. Nobody said anything about spare Stokeses.

Yes, I’m spending another day complaining about Hallie, but Dark Shadows has decided that this is the rocket sled to success that they need right now. They just did an attention-getting time travel trip into the future, which was a fairly thrilling adventure, compared to the usual pace of Dark Shadows, lots of deaths and betrayals and sudden bursts of violence, with some of the best actors on the show at center stage.

That was Friday. This is Tuesday.

Hallie:  David, I’ve got to talk to you.

David:  Well, I’m in for it, if Maggie catches you here.

Hallie:  David, something terrible is going to happen in this house!

David:  What do you mean, something terrible?

Hallie:  I don’t know what it’s going to be, but I heard them talking about it!

David:  You heard who?

Hallie:  They were all in the drawing room. Barnabas was saying the strangest things.

David:  Yeah, and you were eavesdropping.

Hallie:  You needn’t sound so self-righteous! You’re not above eavesdropping now and then!

David:  Okay, okay. What else did they say?

Hallie:  Well, I couldn’t hear everything they were saying. But every once in a while, Barnabas talked of a disaster that was going to happen. What do you think he was talking about?

David:  Well, you were the one listening. Didn’t you hear?

Hallie:  I told you, I couldn’t hear everything! But I will tell you one thing. Your aunt Elizabeth was pretty upset by it all.

David:  Oh, you scare too easy.

Hallie:  I didn’t say I was scared! 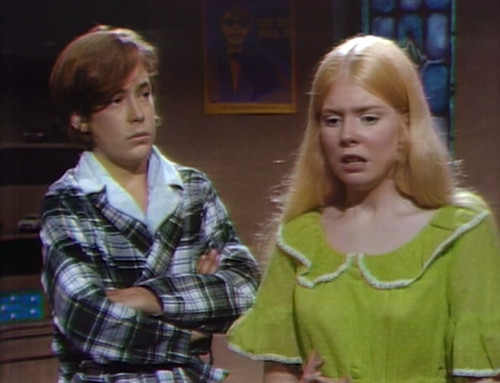 So what are we supposed to make of that? Every step of that conversation is painful, just arrant speedbumpery. Let’s run through the concerns.

The fact that you have to say “Well, what is it?” at the beginning of your scene is not adequate screenwriting. Characters should not have to remind each other to say interesting things.

Come on, y’all. We should not be having pronoun trouble like this. Talk in sentences.

These children hate each other. Also: why was she eavesdropping? She’s been in two episodes, and practically the only thing we know about her is that she can’t mind her own business. Or talk clearly.

So why are you telling us about it? Get better at eavesdropping, or find a new hobby.

#6. “Every once in a while, Barnabas talked of a disaster that was going to happen. What do you think he was talking about?” — “Well, you were the one listening.”

Yeah, good point. Why are you bothering people with this?

Oh my god, seriously, this girl.

Well, then why did you come to David’s room to tell him about a scary thing that you’re not scared of? Jesus.

So David clearly does not like this girl. He’s not happy to see her, he’s frustrated with her conversation style, and he doesn’t trust her judgment. This discussion is clearly impinging on his personal time.

It’s true that David and Amy used to quarrel now and then, but their first scene together wasn’t a Who’s Afraid of Virginia Woolf-style dumpster fire. These characters are going to spend a lot of time together in the coming days and weeks, and I for one am not optimistic. 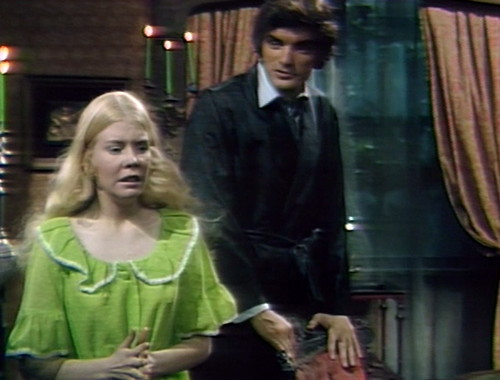 As longtime readers know, there are three steps to getting the audience to accept a new character: make a friend, make a joke, and make a plot point happen.

Making a friend shows that the new character has value in the narrative, because somebody we trust is willing to vouch for her, and show interest in her well-being. It’s easy for the vampire to kill random streetwalkers at the docks, because nobody cares about those characters, and whether they live or die has no consequence in the story. If everyone shrugs and says, yeah, Hallie’s here, she’s a pain in the ass, then we don’t have to care about her.

And they know how important that is, because they make a big deal about how much Quentin likes her. She knocks on his door in the middle of the night, like apparently she does all the time, and he is unbelievably patient and kind.

Quentin:  Hallie, it’s past your bedtime, isn’t it?

Hallie:  I’ve got to talk to you, Quentin.

Quentin:  Why? You have trouble?

Quentin:  (chuckles) Come on, you’re going to have to do better than that.

Hallie:  You know those strange feelings I get sometimes?

Hallie:  Quentin — those two people who came back to Collinwood today —

Hallie:  Yes. Do you think — what I mean is — are they good people?

Quentin:  Now, you’ve seen them. What do you think?

So that’s adorable, right? He takes her seriously, he listens to her troubles, he fills in gaps in her story, and when she asks him a lunatic question, he indicates that she can work it out for herself.

And later on, Quentin reinforces the point when he talks to Barnabas.

Quentin:  Listen to me, have you said very much to the girl?

Barnabas:  No, Julia and I felt she wouldn’t understand.

Quentin:  Good, because I don’t want her to know anything that you’ve told Elizabeth and myself. She’s a very sensitive child, she frightens quite easily.

Barnabas:  I understand that her parents died quite recently.

Quentin:  About six months ago. She was living with relatives, and Stokes brought her here. We’ve become very fond of her.

That’s apparently an opinion that her relatives don’t share, by the way, because they couldn’t stand to have her around for more than six months.

But this is exactly the correct way to integrate this new character into the cast. Quentin exhibits concern and patience with her, and then goes out of his way to inform Barnabas that the family has accepted her. The audience loves Quentin, and Quentin loves this girl, and that should be enough for us.

So they’ve taken care of the “make a friend” step, except for the obvious fact that David despises her, and you can check off “make a plot point happen” as well. This entire week is about Barnabas, Julia and Quentin trying to figure out the nature of the catastrophe that will destroy Collinwood, and Hallie’s the one who triggers every step of that process.

Hallie says that she feels like they’re being watched, and pretty soon, Carolyn and David share that feeling. Hallie finds an antique dress on her bed, and hides it, and then puts it on and walks out to the gazebo in a trance. She appears in David’s dreams, dancing around in weird outfits. David is part of this as well, but he’s lived in this house all his life, and Gerard and Daphne didn’t take an interest until now. This is Hallie’s problem.

Barnabas and Julia stand around in the drawing room obsessing over the impending disaster, but they don’t actually make any progress in their investigations. Meanwhile, Hallie is upstairs, upsetting everyone and destroying the world. Hallie makes plot points happen. 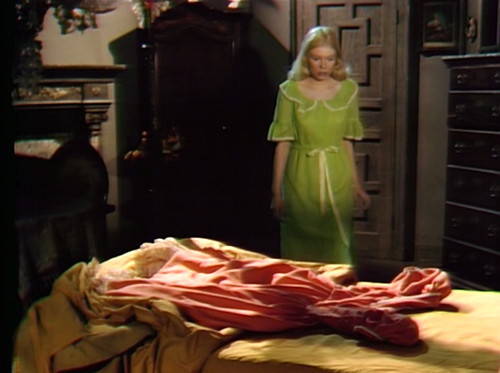 So the problem, obviously, is that she never makes a joke. All she says is, “I have the strangest feeling!” and “Oh, Carolyn, I’m scared!” and “I woke up, and I went to get a glass of water, that was all!” She’s always upset, and she has no personality outside of her role as a haunted child.

Now, the “make a joke” step isn’t necessarily about making everybody funny and turning everything into a comedy. It’s a courtesy extended to the audience, a way for the character to acknowledge that entertaining you is an important part of her job description.

And that’s just not happening here. Hallie starts out breathless and unwell, and she continues in that vein for the next six to eight weeks of our lives. Now that I’ve done two hate posts in a row, I’m going to try and lay off for a while, and find something else to talk about. But that is not a license for her to get any more annoying than she currently is; if she acts up, then we are going to have another conversation about this.

So I’m afraid this isn’t an easy re-entry back into present-day Collinwood. At least we can look back and reminisce about the good old days, twenty-five years from now, when Hallie was silent and somebody else.

When Barnabas opens the drawing room doors to find Carolyn crying, the boom mic is very clearly in view, and it stays there for about five seconds.

Nancy Barrett’s name is spelled “Barret” in the credits.

We see David’s room again this week, which I’m obsessed with. In Parallel Time, it was Daniel’s room, which had some of the same stuff — the concert posters, the ship in a bottle, the robots, the cars, the girl and dog protestors, and the box with spots — but it was missing a lot of items, including the US map, the kite, the sailboat, the football player, the nutcracker soldier thing, the cat picture, the radiometer and the globe.

This week, I’m happy to say, they’ve brought back the map, the globe, the football player and the nutcracker soldier thing. Still no sign of the kite, sailboat, cat picture or radiometer, but I’m sure they’re still around somewhere. Try to stay calm.