“I can feel the vibrations of his fear!”

Petulant homeowner Quentin Collins is a fugitive, accused of crimes that he’s only partially responsible for. With nowhere to go and no one to trust, Quentin goes upstairs and hides in the attic, which in Collinwood means the tower room. It’s a pretty safe hiding place, because everybody knows to keep away from the tower. The only things that happen here are history-wrecking mythological catastrophes.

Searching for Quentin, Will Loomis makes his way up to the tower, keeping an eye out for tragic irony as he goes. Will enters the tower room, and finds evidence of Quentin’s presence — his tie, his watch — but the man himself is gone.

So Quentin must be amazing at this. You have to be pretty seriously committed to the concept of hiding out to not even be in your own hideout.

Then the door opens, and in walks Angelique, the villain of the piece. She’s an undead witch who came back from a fatal hatpin attack thanks to medicine and sorcery, and now she’s living in Collinwood, pretending to be her twin sister. Will knows who she is, of course, because he’s the blood slave and confidant of gentleman vampire Barnabas Collins, and Barnabas is the sworn enemy of all Angeliques across the multiverse.

It’s not immediately clear whether she knows that Quentin’s been hiding here or not, and I don’t know why she suddenly decides that today is the Fall of Will Loomis. But she does, and it is.

Will hasn’t had that much to do during this Parallel Time storyline, because he was gone for the first six weeks filming House of Dark Shadows. By the time he got back to television Collinwood, the big stories all involved other people. Will’s mostly been offscreen, purportedly guarding Barnabas’ coffin during the day, except for every single time somebody comes into the Old House hunting for the vampire. I don’t know what he’s actually been doing.

But John Karlen is about to leave the show for a few months, and they’ve decided to make a big deal out of his exit. For the last couple days, Julia temporarily refused to help Barnabas with his schemes, so that Will could tag along with Barnabas and remind the audience that he exists. Now he’s going to fall, and surprisingly, that’s actually going to matter.

The thing that’s great about John Karlen as a soap opera actor is that in his head, he’s in a Tennessee Williams play — usually A Streetcar Named Desire — but the Parallel Time version of Will is an alcoholic, so today he’s doing Cat on a Hot Tin Roof.

This is Brick, confronted by Maggie the Cat, trying to hang on to his preferred version of the truth. “Mendacity is a system that we live in,” Brick says. “Liquor is one way out, and death’s the other.” That’s pretty much Will’s entire story.

Angelique wants something from Will — the secret that gives Barnabas his power — and we get to see the tricks that she used back when she was alive, to control the men around her. We know that Quentin, Bruno, Cyrus, Dameon, Roger and Will all danced to her tune — Bruno’s the one who wrote it, actually — but she’s had to downplay the direct manipulation while she’s pretending to be Alexis. Today, she drops the facade.

“I’m Angelique,” she says, reaching out to stroke Will’s cheek. “Your Angelique.” The touch of her hand can redirect a conversation towards a topic of her choosing.

“You always liked to be caressed, didn’t you, Will? Do you remember all the nights we spent together, sitting by the fire?” He does. It’s not a happy memory.

And then she does what everyone does at Collinwood: she rewrites history, to her own advantage.

“We’re all alone,” she says, positioning her lips within range. “Just the two of us. Just the way we always wanted it.”

Now, the question about this scene that’s never fully answered is how he has the strength to resist her, when she’s pushing his buttons harder than she ever has before. Obviously, “the two of us, the way we always wanted it” is a lie — Angelique could get anything she really wanted, in the way of male companionship. But she’s looking into Will’s heart, and giving him the version of herself that he’s most susceptible to.

But he pushes her away, and there’s the question: is he just following the counterprogramming that Barnabas installed when he took over Will’s life? Or is Will actually making the choice not to fall for this bullshit anymore? And if he won’t fall for that — then what does he fall for? 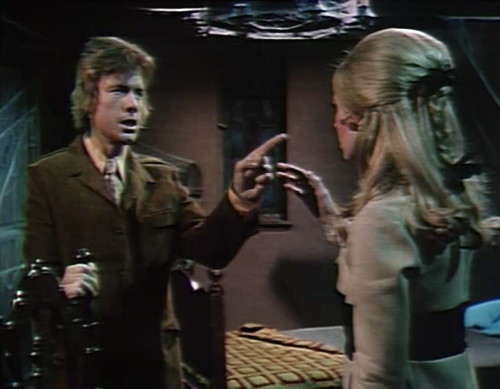 He pants, and he shudders, and he runs his hands through his messy hair. He mutters and makes hand gestures and squints his eyes and finally, visibly cracks, doubling over and hollering a wordless cry of pain. He stumbles to the window, and pounds on the sill. “I can’t tell you any more!” he thunders.

He’s overacting, of course, but if you can’t overact when you’re fighting a hypnotic succubus about whether your boss is a vampire, then when can you? I mean, be fair.

She ruined his marriage. I mean, technically he ruined his marriage, but it could have been a hell of a lot less ruined if Angelique hadn’t come along. Will was married to Carolyn Stoddard, who’s beautiful and intelligent and strong-willed — and filled with enough teases and tortures and hidden treasures to keep a man interested for life.

Yes, she has unresolved daddy issues, because her unresolved daddy faked his own death when she was nine, and she probably held a part of herself in some remote place where it wouldn’t get hurt when her husband inevitably followed her father, passing out of her life with no apology or explanation. She’s complicated. People generally are.

But Will was a genius. He must have been, because he took the unbelievably boring story of Non-Vampire Barnabas Collins, and turned it into a Pony Award-winning hip-hop musical that nobody can afford tickets to. Angelique probably thinks that it was her magical influence that inspired him to greatness, but that’s nonsense. Angelique’s influence stopped him from writing, kept him running in circles between Collinwood and Loomis House, tormenting him with all those nights they spent together, sitting by the fire and not actually having sex. If he can be blamed for that — for the selfishness and stupidity and general lack of self-respect that kept him coming back for not very much — then he can also claim ownership of his successes. 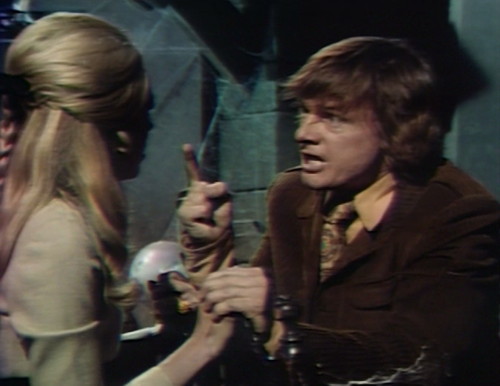 Angelique is stunned. “What kind of power does he have over you?” she cries, because she still thinks this is about Barnabas.

Brick asks, “What is the victory of a cat on a hot tin roof?” and Maggie answers, “I wish I knew… Just staying on it, I guess, as long as she can.” But sometimes there’s a victory in falling. 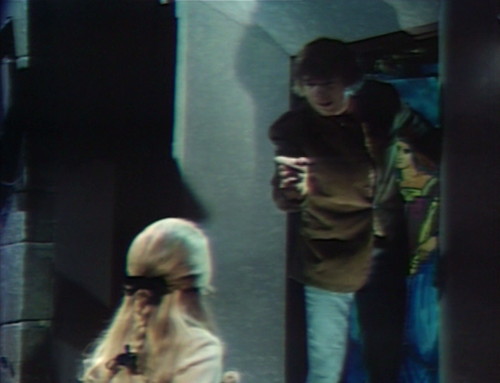 He scrambles up onto the windowsill, taking to higher ground. He can see her more clearly from up here.

Will’s looking for his own hideout, the path that leads him away from Barnabas and Angelique, and their senseless, endless, dimension-jumping Time War.

He’s flying through the air now, released from every burden but gravity. For the first time in years, Will Loomis is finally free. It doesn’t last very long, but length isn’t everything.

Will calls Angelique “Alexis”, and she says, “That’s not my name! My name — you know my name.”

At the end of act 1, when Angelique turns to face Will at the window, she’s slightly off mic.

When Will screams, “I won’t do it! I’ll never do what you want!”, he knocks over the little table that he’s been pounding on. It happens just off camera, but you can hear it fall, and in the next shot you can see that it’s not where it was.

In the final scene, when Angelique clutches at the stair post for balance, it comes loose a bit, making an alarming crunching sound.