“But we can get to Angelique through her!” he says, and she says, how? which seems like a fair question.

“If we control some of her condition — slightly! — Angelique will collapse,” he says. “Then — well, we can control her then, and she can do nothing! That will give us time!”

So that’s the plan, I guess; all we have to do is control some of her condition, slightly. We finally got that all figured out. 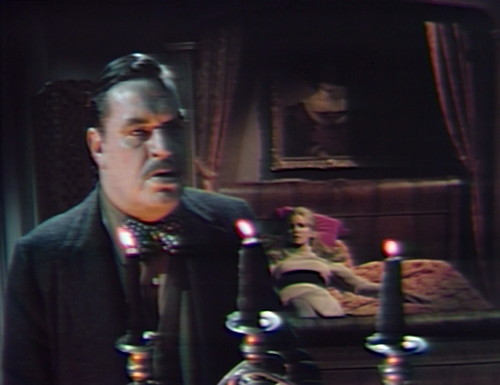 We’re currently parallel parked in Parallel Time, a nearby exospace where everything is basically the same as our world except that I’m entirely sick of it. Barnabas and Julia have travelled on purpose to this strange otherworld in order to save the concurrent Collins clan from soap vixen succubus Angelique, a freeze-dried ice witch who’s come back to life thanks to a proprietary formula that nobody quite understands.

Angelique’s father, an underqualified humbug named Timothy Stokes, has resurrected his beloved daughter using some fateful combination of medical science and black magic that he can’t really explain, because he is neither a doctor nor a magician. I’m not sure what he is; he seems like a grifter who hangs around the dog track. But he has successfully rebirthed his wicked stepdaughter, using syringes, black candles, a nameless female houseguest on semi-permanent sleepover duty, and maybe a couple rolls of masking tape. There must be a trick to it, that’s all I can figure. 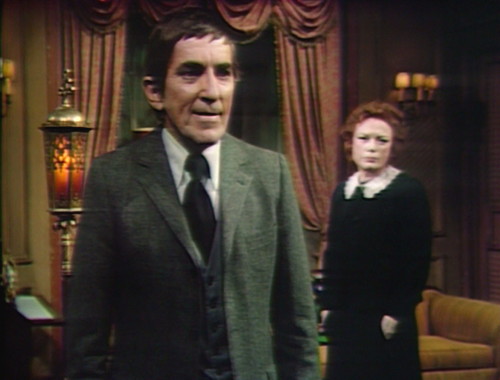 So there’s this young woman over at Stokes’ place who’s lying face up on a table, unable to move or speak or eat or do much of anything, except send her life force to Angelique via the candles. If Barnabas and Julia can get her to wake up and take charge of her life force again, then Angelique would fall on the floor and die, which would be great, because then we could go home and play with our own Stokes, who drinks sherry and makes fun of people.

But here’s the complicated part. Quentin is currently on the run from the police, accused of choking lunatic pianist Bruno Hess to death, which he didn’t exactly do. I mean, Quentin choked Bruno — he chokes a lot of people — but he didn’t actually choke him all the way to death. Quentin got him maybe two-thirds of the way, and then Angelique did the rest.

It’s a fraught scenario, and it’s hard for me to explain it to people, because in every single episode, they make an unexpected tweak to the audience’s mental model of what’s going on. I’m not talking about a plot development, which would be nice; I’m talking about the main characters taking a slightly different angle on what they think the story is about.

For example: this “control her condition slightly” business, which is a whole new idea. A couple days ago, Barnabas and Julia wanted to wake Roxanne up, because then Angelique would die and everyone would be happy. But now, they’re concerned that if Angelique dies, they’ll never be able to prove that she killed Bruno, although I’m not sure how they’re going to prove that anyway. So suddenly Barnabas wants to try this weird time-share concept where they weaken Angelique by a certain percentage, just long enough to secure a murder conviction.

Julia’s being a sourpuss and doesn’t want to play, so Barnabas says fine, he doesn’t need her anyway. “You forget, Julia,” he announces, “that I’ve had work transferring life force into Adam. It would be easier if you helped. If you won’t, I will do it alone.”

So there you go, apparently everybody’s a sorceror supreme today. Y’all need to step back for a minute and figure out your areas of expertise. 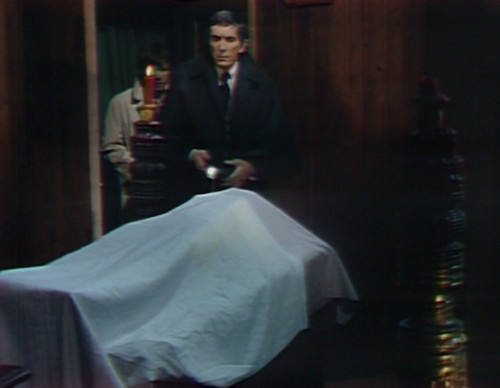 But if there’s one thing that Barnabas knows how to do, it’s break into a place and fool around with unconscious young women. That is actually a Barnabas Collins specialty.

And what do you know, it turns out Stokes doesn’t even lock the door; Barnabas just turns the handle, and walks right in. Then they make their way through the drawing room, and the door to the mad science lab is unlocked too. And there’s Roxanne, or some Roxanne-shaped object, lying face up on the table.

Now, between you and me, that’s not actually Roxanne under the sheet, because they didn’t need the actress to show up today. All she does is lie there until Barnabas and Will load her into the car, and then she still just lies there, somewhere else. This is not actually a story about Roxanne.

Roxanne is a MacGuffin, an object with no inherent value that motivates the characters in a story to make decisions and take action, like the Maltese Falcon, or the blueprints to the Death Star. You could replace her with a mannequin, as they do today, and it doesn’t make any difference. The only thing that matters is that she’s the key to destroying Angelique. Roxanne is basically an off switch that Barnabas inexplicably falls in love with.

Now, the mechanics of the kidnapping are a bit hazy. Barnabas mentions that they’ve got a car waiting outside, and they’ll have to carry her, which is easy to say. Have you ever carried an unconscious person out to your car? It’s not easy. There are a lot of doors between here and the Old House, and somebody has to hold them open. Grown humans just aren’t that portable.

But Barnabas doesn’t give it a second thought, he just leans over like he’s going to pick her up and carry her under his arm. He’s about to learn some important lessons about anatomy.

But this kind of thing happens all the time on Dark Shadows; they’re always moving a coffin from one location to another, sometimes single-handedly, through a series of secret tunnels. We don’t see it happen, of course; they just say, “Let’s move this coffin,” and then the next thing you know, it’s somewhere else, like they beamed it up to the Enterprise. This is one of those.

But there’s a moment in the middle of this heist sequence that we have to discuss, because it’s jaw-droppingly odd.

Barnabas is about to liberate Roxanne, when Will says, “Are you sure she’s alive? She hasn’t moved since we’ve been in this room.”

“Stokes has somehow put her in this state,” Barnabas says, which isn’t really an answer. He looks around helplessly, and then gestures at a pile of notebooks on a nearby desk. “Will,” he says, “take a look in those books, and see if he has any records on her.”

I know we’re all busy these days, but take a moment to appreciate that line. I don’t even think that’s Fridspeak, that’s actually a line in a script that was broadcast on television. See if he has any records on her?

And then Will, bless his heart, walks over to the notebooks. He picks up two of them, flips through them for literally four seconds each, and then slams them down on the table, yelling, “Barnabas, we’ve been here too long!” So that’s the end of that research project. 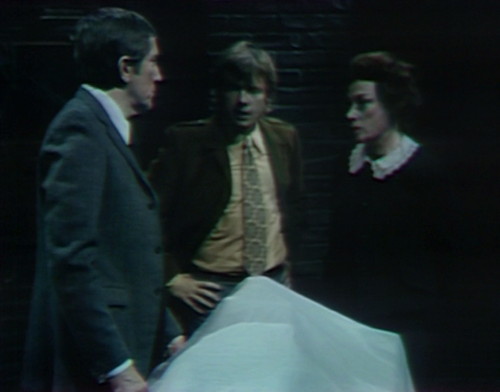 And then, ta-dah! The next thing you know, she’s all the way in the secret room behind the bookcase in the Old House, presumably none the worse for wear. This tiny crawlspace is where Barnabas stores the coffin that he sleeps in, except if they have a scene where they need something else to be there, which is most of the time. So I guess they’ve teleported the coffin into self-storage, and Barnabas has lined up an AirBnB somewhere.

Now, obviously, I don’t expect gritty realism in my psychedelic supernatural science-fiction comedy soap opera, so all of this warping of time and space is fine. This is fairy-tale plot construction, where the handsome prince is a vampire, and if he can awaken Snow White with true love’s kiss, then the mean witch will die, and the dwarfs can all go home to their own dimension.

Naturally, Angelique shows up looking for Barnabas, so Will has to go out in front of the bookcase and pretend that Barnabas got called away unexpectedly. She says that she’ll wait, so he makes a big deal about how he’s decided to stop drinking and start writing again, and he’s just about to start his new best-selling novel.

But it’s actually not clear why they have to hide Roxanne from Angelique, because what would she do if she knew they had her? She can’t drag Roxanne away by herself — there’s three of them and only one of her, and she doesn’t even have a car outside.

And you can’t call the police, and report that somebody stole the unconscious life-force donor from the back room at your dad’s house. This is an area where the police can’t really help you. You are no longer part of their customer base. 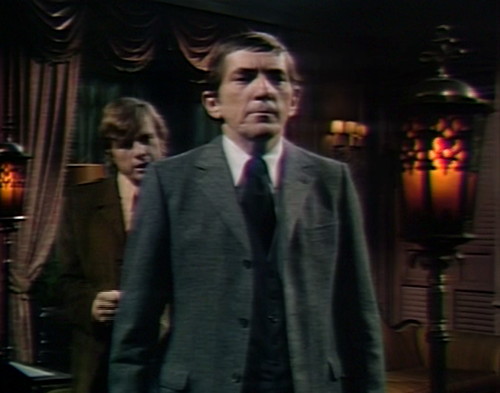 And then, just when they’ve got that scenario under control and you think you understand what’s happening, they make another unexpected change in story direction.

“You’re neglecting one vital point,” Barnabas says, beginning a new scene out of entirely nowhere. “We know that Alexis is Angelique. All we have to do is show Quentin that body in that room.”

Will objects; apparently we’re talking to Will about something. “But even if we did find him…”

“You will find him!” Barnabas declares. “Tonight!”

Will says, “That’s impossible,” but nothing is impossible for Fridspeak.

“He needs help,” Barnabas says. “Angelique is helping him.” This is not the case. He starts over. “I know he must be somewhere on the estate, somewhere the police haven’t looked. You know the house, you know the grounds, go start your search, Will!”

So that’s got to be the third bank turn in story-progression this week. We started the day with the idea that we were going to steal Roxanne and partially revive her. Now the problem is that we need to prove to Quentin that Alexis is Angelique, and somehow showing him Roxanne is going to help.

I mean, telling Quentin the truth about Angelique would be a perfectly understandable narrative goal, but it’s not the one that we’re currently aiming at. If they wanted to do that, they would have done it by now. This is the one time in the last several months when convincing Quentin that Alexis is Angelique would not actually help in any way.

So what we’ve got here is a herd of Schrödinger’s cats. Angelique is both alive and dead at the same time, and Roxanne is too, from the other direction. It’s no wonder the Fridspeak is flaring up. Barnabas is straddling two worlds, with one foot in “Quentin needs help” and the other in a parallel dimension called “Angelique is helping him.” He can’t actually make progress, because every time they establish what his goal is, they shake up the Etch A Sketch and start over. Maybe Will could check the notebooks again? I’m sorry, I’m just trying to help.

Will is shocked when he sees a purple drape hanging up at Stokes’ place. Barnabas takes it down, says “Will, it’s nothing,” and tosses it on a chair. What is that, and why did Will (and the music cue) find it so alarming?

When Amy runs into the drawing room in act 1, there’s a boom mic visible at the top left.

Will tells Angelique, “Well, really, you know, it’s really rather very embarassing for me to admit.”

Angelique shouts at Julia, “The one night that you should have followed Barnabas Collins everywhere he walks — he goes!” Then she tells Julia to find her father: “Take him back to the cabin with you. Explain to him what happened. Maybe he knows what happened.” 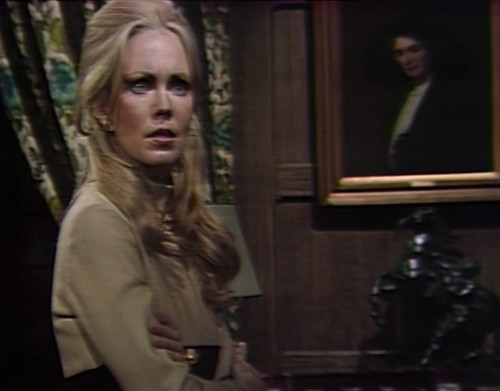