“Cyrus must have been terrified at his own duality.”

“That weapon won’t do you any good,” Barnabas snarls, “so you might as well just put it away.”

And, dude, if John Yaeger had any capacity for that, he wouldn’t be in this mess to begin with. Putting things away is not his area of expertise.

Let me begin by saying that man is chemical in his composition. I mean, everything is, but at the moment we’re talking about man — specifically, stupid man. Stupid man is even more chemical than usual.

For example, Dr. Cyrus Longworth of the parallel Longworths, who’s currently in the “you’ll never take me alive” stage of his criminal career. Cyrus is currently doing business as the odious John Yaeger, an altered ego who’s brutalizing the woman he’s been telling himself that he loves. He’s keeping Maggie locked up in the basement of an abandoned farmhouse, where he’s trying to prove that you can get a woman to love you by abducting her and then offering her champagne. Dr. Longworth is not very good at designing research projects.

“Now, if the proper compound was distilled and administered to a human being,” he said, “this chemical composition could be radically altered.” The fact that we already have this compound — it’s called alcohol, we’ve had it for a while — has not stopped him from radically altering his life by guinea pigging himself into a crime spree.

This is the magic elixir, made out of horsehair and bad karma, that took a brilliant young doctor with a fiancee and a future, and turned him into a violent thug who leaves a trail of battered women behind him as he lurches toward extinction.

We’ve been watching this story unfold for two months now, and I think it’s reasonable to ask for some kind of status report. What are the results of this experiment? What have we learned?

It started back in 1886, of course, with Strange Case of Dr. Jekyll and Mr. Hyde. Jekyll wasn’t the first person to realize that human beings struggle with a divided nature, but he owns the patent on weaponizing it. Here’s the mission statement, courtesy of Robert Louis Stevenson:

“With every day, and from both sides of my intelligence, the moral and the intellectual, I thus drew steadily nearer to that truth: that man is not truly one, but truly two.

“If each, I told myself, could be housed in separate identities, life would be relieved of all that was unbearable; the unjust might go his way, delivered from the aspirations and remorse of his more upright twin; and the just could walk steadfastly and securely on his upward path, doing the good things in which he found his pleasure, and no longer exposed to disgrace and penitence by the hands of this extraneous evil.”

You know, it takes a special kind of guy to inquire into the nature of humanity, discover a fundamental truth, and then say to himself: I wonder if I can screw around with this a little? I mean, yes, this duality is obviously part of God’s divine plan for humankind, but I’m sure He won’t mind if I make a couple adjustments. 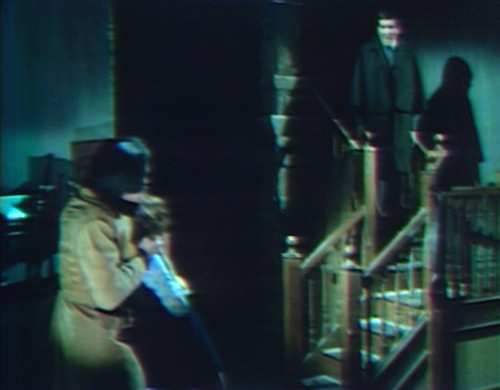 “Let her go!” Barnabas thunders, appearing on the stairway like a deus who’s just ex machina’d on short notice and has no time for backchat. “If you don’t, you’ll never leave this place alive.”

“I’m aware of what little time I have left,” Yaeger spits, “but I’m going to go out my own way!”

And he keeps a tight grip on Maggie, like he’s King Kong battling biplanes on the Empire State Building. This is not going to go well.

Here’s the thing: Dr. Jekyll is brilliant at chemistry, lousy at philosophy, and catastrophically bad at urban planning.

Because this duality thing doesn’t really make a difference on the individual level. “Good” and “evil”, to the extent that they exist at all, only make sense in relation to other people. You can’t just sit at home and be evil all by yourself. You have to get up and hurt somebody.

So, ultimately, this is a problem of cities. Millions of strangers leading their invisibly intertwining lives, each of them truly two. When the unjust decides to go his or her way, delivered from the aspirations and remorse of his or her more upright twin, then that’s going to impinge on other people. It’s bound to. We don’t need everybody to be one hundred percent upright all the time, but you have to at least try.

And I’m not sure that ever registered with Dr. J. He just decided to bifurcate the species and birth a race of remorseless killers, and if that happens to impinge, then hey, it impinges.

Yaeger throws Fay Wray to the floor, where she knocks her head against something and ceases to take an active role in world affairs.

He unsheaths the sword from his secret sword-sheath, and waves it in Barnabas’ direction.

“That weapon won’t do you any good,” Barnabas growls, and Yaeger’s like, duh, I don’t want to do any good. That’s kind of my whole thing.

It’s actually hard to imagine what the story would be like if they took the premise seriously — if there really was a “good” version of Cyrus, actively trying to thwart Yaeger’s plans. I mean, Cyrus has his remorse moments, where he considers putting off transforming himself into a hundred-percent nightmare man, but mostly he’s an enabler.

That’s because Cyrus and Yaeger basically want the same things. Cyrus wants to stay out late, get into fights and torment barmaids, just like his unjust twin. The difference, as Yaeger has pointed out multiple times, is that Cyrus waits, and Yaeger takes. Cyrus fantasizes about dominating Maggie, and claiming her for his own. He just hasn’t gotten around to it.

So the point of the story, for both Stevenson and the Dark Shadows writers, is that evil is stronger than good. It’s addictive and fun, and it’s an opportunity to achieve your goals without hesitation. The only thing that keeps us all from falling into the abyss is that evil eventually destroys itself, when it rubs up against the city and its protectors.

Yaeger, who’s super doomed at this point, thrusts his blade into Barnabas’ soft areas. And Barnabas pulls it back out again, unbloodied.

“What kind of creature are you?” Yaeger boggles, and the creature just smiles. It turns out he’s not the only one who’s truly two.

By the way, do you know what would’ve been great? Sexy John Yaeger.

I mean, Chris Pennock is a good-looking guy — he’s no Selby, but who is? — and they could have played up Cyrus’ mousiness and Yaeger’s sex appeal. Take off the fake nose, the greasy wig, the hairy palms, the bad fashion, and give him a roguish smirk and a nice wardrobe. Still evil, obviously, but less obviously evil.

I know that Mr. Hyde isn’t supposed to be sexy according to a strict construction of Stevenson, but if Dark Shadows did things by the book, then the storyline would be 75% percent Cyrus’ lawyer talking to housemaids about what Cyrus is doing offscreen, behind a locked door.

Anyway, it all works out. The philosophical, moral and biological questions posed by this experiment all have the same answer: a burst of violence.

That’s not Stevenson’s answer, by the way; that’s a Dark Shadows special. Stevenson thinks that the evil side of man’s nature is overcome by society — a system of rules and laws and special prosecutors, checks and balances and democratic norms. He’s probably right, in the long term.

But if you have to wrap this story up in a hurry, and that’s what Dark Shadows is about to do, thank goodness, then the only way to stop an evil guy is to go get another evil guy. And that’s how you get from two to zero.

Yaeger’s sword-cane brandishing doesn’t come off as well as it should — the sword slips partway back into the cane, so it’s kind of stubby when he holds it towards Barnabas.

When Barnabas chokes Yaeger to the floor, there are electrical cables visible.

Maggie gets up and stumbles through the door to the basement cell, and we can see past the edge of the set to what I think is the Collinwood foyer, and the corner of Barnabas’ portrait. (See the screenshot below.) When she moves again, you can also see a folding chair.

Boom mic cameo #1: When Barnabas leads Quentin out of the drawing room, the boom mic can be seen through the doorway.

In the basement, Barnabas says, “After all, it was Cyrus who told me to find — told me where to find Maggie.”

Boom mic cameo #2: When Hoffman is on the phone to Angelique, we can briefly see the top of the set, and then a very noticeable boom mic.

When Barnabas shows Cyrus’ body to Quentin, somebody slams a door in the studio.

In the drawing room, Hoffman looks up from her book to get her cue before starting her scene.