“Somehow, the absence of them is more frightening than the disturbances themselves.”

I don’t know about you, but Quentin Collins has spent the evening jumping from one crisis to the next. He began by questioning his butler about the murder of Dameon Edwards, a mysterious gigolo who everyone had pretty much forgotten about, until he suddenly started projecting his essence around the house and conducting post-mortem piano recitals.

Then Quentin went downtown, where he found the mysterious John Yaeger beating a romantic rival with a cane, a spontaneous act of pointless violence which is somehow connected to Quentin’s friend Cyrus, a mad scientist who’s been writing mysterious thousand-dollar checks to cover other people’s bar fights. Quentin chased Yaeger from the docks to the bar, and from the bar to Cyrus’ lab, and then to a barmaid’s boarding house and finally back to the lab, where he almost cornered the guy but lost him at the last minute.

Now Quentin’s come home after a long, weary night, and Alexis, his mysterious sister-in-law, rushes to his side as soon as he walks in the door.

Quentin goes on alert again. “Why, has something happened?”

“There haven’t been any more disturbances, have there?”

“No,” she admits, “but somehow, the absence of them is more frightening than the disturbances themselves.”

“This house — it’s so quiet!” she breathes. It’s like the calm before the storm!”

Or maybe everything’s fine, Quentin thinks, and you need to cut back on the espresso.

As always, there’s no time to talk sense to Dark Shadows characters; once they’ve got an idea in their heads, there’s no shaking it. Alexis says, “Somehow, I feel that all of us are doomed!” and then Quentin is supposed to accommodate that into his worldview. By the way, there’s a better than average chance that this woman is his dead wife.

But that’s life in Parallel Time, an alternate dimension where most of the cast is on vacation, and Quentin is pretty much the only person we care about. That’s why he has to be in every storyline, running around town and commenting on everything. “I’m going to keep on asking, until I get an answer,” he says, and “I’m as worried as you are,” and “If you need anything, you just call me, I’ll be down here.” And they do need something, of course. We all do.

So this episode is mostly people standing around and worrying, which now that I say that is the entire description of how soap operas work. At the start, Quentin manages to track the devilish Mr. Yaeger to Cyrus’ laboratory, while he’s retrieving his magic bottle of antidote. The police are after Yaeger, for some reason — insider trading, probably — and Quentin appears magically in someone else’s basement to confront the perpetrator.

But he makes the rookie mistake of telling Yaeger to please wait patiently and don’t run out the back door while I call the police, which is exactly what Yaeger does the opposite of. And then the malefactor locks the door from the outside, which for some reason Quentin can’t open from the inside. This is a bit silly, but at least they’re not doing the thing where you yell “come back!” instead of following the person, because you need to stay on the set and emote.

Alarmed by the noise, Sabrina comes downstairs to the lab, apparently still at work, even though it’s the middle of the night and she doesn’t live here. She’s got a key for the locked door, but Quentin glances outside and doesn’t see Yaeger, end of investigation.

So they stroll back to the middle of the room and adopt their most puzzled expressions. “I don’t mind telling you,” Quentin says, “that after meeting that man, Sabrina, I’m as worried as you are about Cyrus’ safety.”

“You think maybe Yaeger did something to Cyrus?” she pants, and he says, “I don’t know what to think,” which if that’s the case then why are you on television talking about it. Sabrina suggests calling the police, but Quentin says they don’t have any proof, and they’re just about to start brainstorming Home Alone booby traps when Cyrus walks downstairs and spoils everybody’s fun. 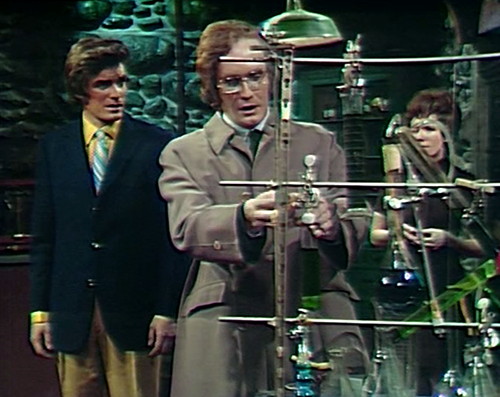 Cyrus emits a series of bleats on the theme of “this is all perfectly normal, why would you imagine anything could be wrong,” and then he fiddles aimlessly with his apparatus until everybody stops asking him challenging questions.

Yes, John Yaeger is an ideal subject for my secret experiments, Cyrus explains, which is why I gave him a post-dated check, and a key to my house, and whatever else he had last night that you might be curious about. The answer to all of your questions is yes.

“Well, Quentin,” he chuckles, casually transferring some green science fluid from one container into another, “I must admit, when I first met him, I had never met anyone like that before in my life! He certainly did have some rough edges around him.”

“Cyrus,” Quentin says, “what kind of a hold does this man have on you?”

And now Cyrus has to explain that he’s doing a post-doc in Villain Studies, which means you have to hang out with villains to some degree. Why is that so hard to understand? It’s like getting upset that Jane Goodall spends so much time with chimpanzees. You don’t go up to her and ask, What hold does that chimp have on you? Nothing, is the answer. This is my job. Leave me alone.

Cyrus finally clears the room and starts fussing with chemicals, and then Bruno rushes in, interrupting Cyrus’ bottle-stirring with more storyline panic. It’s still the middle of the night, by the way; this is one of those long Collinsport nights where everyone stays awake and just powers through their fatigue by visiting each other and having conversations.

Bruno’s upset because he thinks that the ghost of Dameon Edwards is haunting him, which it is. If you’re not sure who Dameon Edwards is or why we should care, then you should go ahead and ask. The answer is that I don’t know.

So Cyrus stonewalls, saying that he’ll think about it, because it’s Wednesday, and nobody ever does anything successfully on Wednesdays. If anyone tries to achieve anything today, then they’re guaranteed to fail, up to and including setting a room on fire.

“You can’t refuse me, Cyrus!” Bruno wails, and he’s right; Cyrus can’t even do that.

“Bruno, if I try to do something,” says Cyrus, “there is no guarantee that I can succeed at all. Just give me some time to think it over!”

“All right,” Bruno says. “I’ll be up in my room, waiting!” I have no idea why Bruno thinks he has a room at Cyrus’ place. Bruno has a house. We’ve been there. It has a piano in it.

But I guess Bruno has a room after all, because now that’s what we’re in.

Bruno is pacing and smoking and fretting, and then Dameon’s ghost shows up in a mirror, laughing. I figured that Dameon was stuck in Collinwood, but apparently he can go anywhere he likes. He’s in a really good mood, too. Sometimes I just don’t understand ghosts. 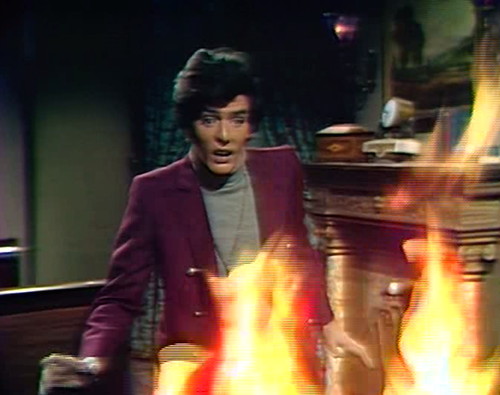 And then, obviously, Dameon sets the room on fire, so now we’ve got that to contend with.

Now, I’m aware that this post is super disjointed and rambling today. I’m basically doing a sarcastic TVLine recap, which I promised myself I would never do, because I am an artist and I have other concerns. But this is what the show is like today, just a jumble of random story elements, to no particular effect.

I don’t know why Dameon sets Bruno’s room on fire. They put it out by flapping blankets at it, so that sequence doesn’t really go anywhere in particular. I guess it’s supposed to get Bruno all stirred up, but he arrived pre-stirred today, shouting “PLEASE, Cyrus, you’ve GOT to HELP me!” So there’s not actually that much further you can go, anxiety-wise.

That’s how things go today, just rushing in and out of sets and saying urgent things. Quentin tells Alexis that they should leave Collinwood, but she says they should stay and fight, whatever it is she thinks they’re fighting. Cyrus suggests that Bruno should leave town too, but he won’t leave, either. That would be the sensible thing to do, for him and them and everybody, but it’s Wednesday, and you’re not allowed to make decisions on Wednesday. You just need to keep everything moving.

So Dameon just laughs and starts fires, and Sabrina gets suspicious, and Cyrus adjusts his equipment, and there stands Quentin, our hero, our champion, and he honestly can’t think of a single helpful thing that he can do.

It all ends in chaos and strangling, as these things usually do. Alexis shouts at Bruno to get out of her bedroom, and he yells, “Not until I prove what you are: a LIVING — DEAD — PERSON!” And then he tries, and fails.

In the teaser, Yaeger steps on Quentin’s first line. At the end of the last episode, they did it correctly: Quentin steps from the shadows and barks, “Yaeger,” and then Yaeger replies, “Ah, Mr. Collins.” Today, Yaeger goes first.

Quentin ignores Yaeger’s flubbed line, and keeps on going with the script anyway:

Quentin:  How long have you known him?

Yaeger:  Oh, we’ve only known each other, very short time.

Quentin:  Where, and how?

There’s a lot of fun with the boom mic when Sabrina finds Quentin pounding on the cellar door. Her first line, “What’s happening?” isn’t picked up properly. For the next line, the boom mic dips down into the frame, and the camera has to pan down to avoid it. When Quentin grabs the key and rushes to unlock the door, Sabrina’s line “Who are you yelling at?” and Quentin’s “Well, he’s gone” are both off-mic.

Quentin repeats a line, when Sabrina suggests calling the police: “We don’t have enough proof! We have no proof that Yaeger’s done anything to Cyrus.”

Cyrus tells Sabrina, “We found this exciting thing, and I must follow up with it very soon.”

Cyrus tells Bruno, “I have a great deal of many things to do tonight.” Let’s face it, Cyrus is kind of a mess this whole episode.

The Dan Curtis Productions slide quivers during the end credits.

20 thoughts on “Episode 998: The Absence of the Disturbances”