“Aren’t you about to be recommitted to the underworld?”

So it turns out Julia can’t cure vampirism after all, just like she can’t cure lycanthropy or Frankenstein Syndrome or acute-onset Creature of the Black Lagoonism. I’m afraid that universal health care for Universal Monsters is still just a dream.

Now Barnabas is reacting to her anti-vamp treatments by becoming even more of a vampire than he was in the first place, which puts the kibosh on the Nobel Prize for sure. The Royal Swedish Academy of Sciences does not want to hear your excuses. They want results.

And sadly, the result here is that we had Megan as the sleepy co-dependent vampire blood slave a couple weeks ago, and now we’ve got Sabrina in the same role, which means I’m supposed to watch Sabrina urging Barnabas to drink her blood, and consider that entertainment. Well, I’m not having it. The show has refused to provide me with a single reason to like Sabrina, and if she wants to die from blood loss and neck trauma, then she should go and do it on her own time. This window is closed.

So instead of watching that, let’s go — for the very last time, I’m afraid — and look at a new form of Dark Shadows merchandise. 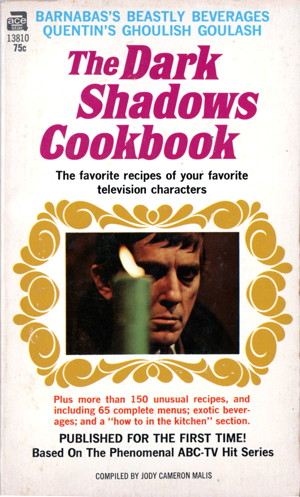 It’s March 1970, and Ace Books is taking the final step in the field of Dark Shadows merchandising innovation — The Dark Shadows Cookbook. It’s a paperback book aimed at the hungry housewives in the audience, compiled by Jody Cameron Malis, a fresh-faced recipe-compiler who will go on to compile The Newlywed Game Cookbook in 1971 and Stan Lee Presents The Mighty Marvel Superheroes’ Cookbook in 1977.

Enticing the reader with promises of BARNABAS’S BEASTLY BEVERAGES and QUENTIN’S GHOULISH GOULASH, The Dark Shadows Cookbook offers “The favorite recipes of your favorite television characters.” We don’t usually see Dark Shadows characters making anything more complicated than tea, so this ought to give us some insight into what they do on their off-hours. 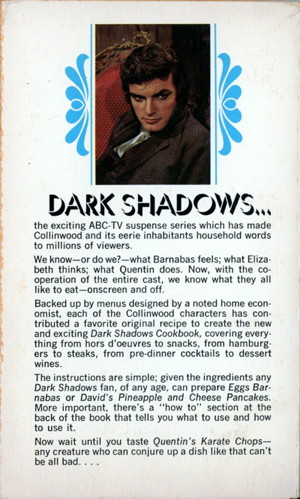 The copy on the back of the book expands on the premise:

We know — or do we? — what Barnabas feels; what Elizabeth thinks; what Quentin does. Now, with the cooperation of the entire cast, we know what they all like to eat — onscreen and off.

Backed up by menus designed by a noted home economist, each of the Collinwood characters has contributed a favorite original recipe to create the new and exciting Dark Shadows Cookbook, covering everything from hors d’oeuvres to snacks, from hamburgers to steaks, from pre-dinner cocktails to dessert wines.

The instructions are simple: given the ingredients any Dark Shadows fan, of any age, can prepare Eggs Barnabas or David’s Pineapple and Cheese Pancakes.

Okay. Well. So many things.

To start with, there’s a lot going on around the concept of authorship; this is taking me back to my college days, and my lit-crit classes about signs and signifiers and the language of self. I mean, just the line “We know — or do we? — what Barnabas feels, what Elizabeth thinks, what Quentin does” could take a couple days to decode.

One thing that’s super post-structuralist about this text is the intentional confusion between the characters, and the actors who play them. It says, “Now, with the cooperation of the entire cast, we know what they all like to eat — onscreen and off.” What does the word “cast” mean in that sentence? Is it the cast of characters, or the cast members themselves?

And then it says, “each of the Collinwood characters has contributed a favorite original recipe,” which, again, what? But that’s coupled with the phrase “Backed up by menus designed by a noted home economist,” which makes the reader wonder: how much influence does the noted home economist have over what fictional characters like to eat?

So this book is creating a sense of intimacy — both with the characters and the actors — which is apparently based on a 17 Magazine style humble-brag about the compiler having access to the entire cast, and learning personal details about their favorite meals. But the “noted home economist” also invokes a kind of traditional authority — someone who’s watching out for us, to make sure that Magda Rakosi’s gypsy grub is safe for us to sample. 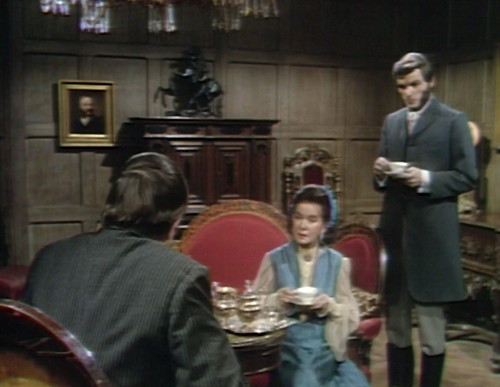 In the Introduction, they give us some assurances that the book compiler does actually understand how Dark Shadows works.

In the huge, brooding old manor house looking down on Widow’s Hill, the tormented beings who live there (vampires, ghosts, witches and werewolves) haunt the unafflicted as well as each other, under an ancient and ghastly curse — a spell which they cannot control, cast upon them back in the dark depths of another time, for DARK SHADOWS actually encompasses three different centuries — 1795, 1893, and the present — and most of the characters slip back and forth in time, always returning to today.

Now, technically, that’s not strictly correct — it’s 1897, for one thing, and the tormented beings aren’t all under the same single ghastly curse. And it sounds like they’re interpreting the repertory-theater time travel sequences as the characters slipping back and forth in time, which isn’t exactly right.

But in a larger sense, that is how the story works. You could interpret the supernatural happenings as being the result of a single curse cast upon Collinwood, and all of the individual characters are suffering under sub-curses. And it does slip back and forth between 1795, 1897 and the present. This feels to me like text written by someone who understands the spirit of the show. 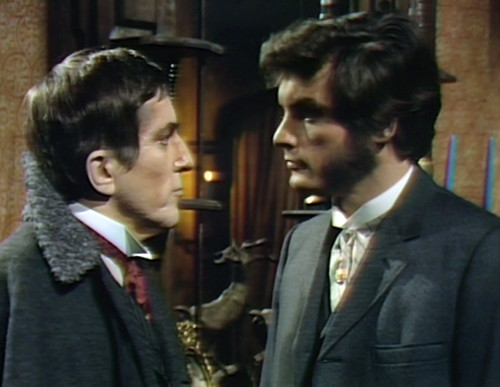 Perhaps the most well-known member of the family is Barnabas Collins, the 175-year-old vampire and family forbear who has returned to Collinwood. But let’s not forget Quentin, who can stand up to man or beast when it comes to setting female hearts aflutter — those not pinned down by stakes, that is.

So that’s just amazing, the mention of the hearts aflutter. It sounds at first as if they’re referring to the hearts of the females in the audience, but it takes a sudden swerve back into fiction at the last moment.

And then there’s another tribute to Roland Barthes’ The Death of the Author:

Since most of the supernatural characters in this fascinating series have their “normal” moments, both off-camera and on, it is to be expected that they would eat “solid” foods to sustain life (as well as whatever it is that beasties and ghouls eat when that certain feeling comes over them). And like most of us, they have their favorite dishes, which they were kind enough to pass along to their fans.

Once again, this blurs the boundary between off-camera and on, where it’s really hard to tell whether the “they” in the last sentence refers to the characters, the cast or the cross-time conspiracy that I invented myself. I’m going to assume it’s the latter.

This approach gets even more convoluted in Stan Lee Presents The Mighty Marvel Superheroes’ Cookbook, where apparently the characters eat what their creator eats. It’s not clear whether Iron Man is saying “Same as Stan Lee!” in the above excerpt, or whether that text comes from the great and powerful compiler. I don’t suppose we’ll ever find out, one way or the other. 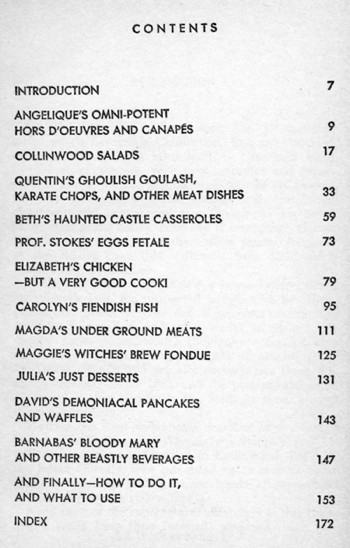 Anyway, the food. Just the contents page is enough to transport you into another world, where Angelique makes hors d’oeuvres, Carolyn serves fiendish fish, and Maggie makes witches’ brew fondue.

Obviously, the chapter on Barnabas’ Bloody Mary and Other Beastly Beverages is the most true-to-life, because as far as we know, nobody at Collinwood ever eats anything, but they sure do know how to drink.

The chapter includes Beth’s Lime Vodka Highball — “pour lime-flavored vodka into a highball glass, add ice cubes and soda, and stir.” — as well as Julia’s Whiskey Sour, Quentin’s Old Fashioned, Angelique’s Mad Manhattan, Elizabeth’s Dry Martini and Prof. Stokes’ Grasshopper. They don’t tell us about David’s beverage of choice, but somebody must be drinking all that sherry they have lying around.

This brings up a question about the target audience for this particular piece of merchandise. The back cover said that any Dark Shadows fan, of any age, can prepare these recipes, so presumably if we give the middle schoolers a jigger of brandy and some creme de menthe, they could whip up a Magda’s Stinger.

But they’ve always had this curious situation of a TV audience composed of housewives, teenagers and the young set in roughly equal parts, and the publication of this book marks the last time in the original run that anybody tries to thread that needle. The line of gothic novels will continue up to March 1972, and the comic books series will run all the way to 1976, but after December 1969, nobody bothers to come up with any new ideas for Dark Shadows merchandise. 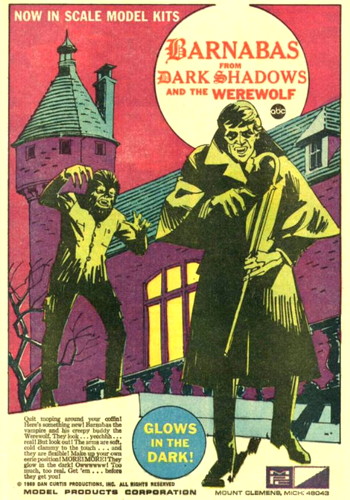 We’ve talked before about the trading card sets, the board games, the View-Master reels, the postcards and the soundtrack albums that sprang into unlikely existence starting in the summer of 1968, and there was another wave of Dark Shadows merch, cresting in late ’69.

There were the Giant Pin-Ups by the Philadelphia Chewing Gum Corporation, in a last spasm of bubble gum merchandising.

There were Magic Slates by Whitman, which could be written on and then erased by lifting the plastic sheet.

There were Barnabas and Werewolf model kits… 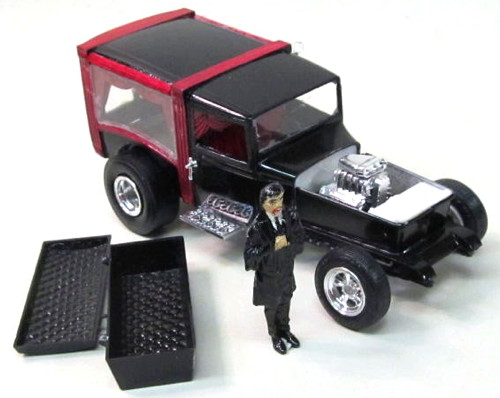 and the Vampire Van model kit, which included a little Barnabas and a coffin for him to rest in.

And there were the Horror Heads, throw pillows which defy any known rules about how people want to decorate their homes. All of these were intended for the middle-to-high schoolers, with the comic books taking up the slack on the teenage market.

And then The Dark Shadows Cookbook, with its hors d’oeuvres and casseroles, and Stan Lee’s beef liver. The rest is silence.

I’m not sure why everybody suddenly agreed to give up on making Dark Shadows stuff in 1970; it’s like they all woke up on New Year’s Day, looked at their lives, and made adjustments. The show has another year to run, and Paperback Library, Gold Key and the hard-drinking housewives are still hanging in there. But as far as everyone else is concerned, Dark Shadows is over.

Thanks very much to John Johnson for scans of The Dark Shadows Cookbook, and Alan James Gallant for the Giant Pin-Ups!

When Barnabas is lighting the candles, a camera shadow passes on the left.

Barnabas and Jeb both struggle for their lines during their scene in act 1.

Barnabas tells Angelique, “You know, you owe an apology to Jeb. He’s the one who told you about your husband. You may never have known the truth, it would have been too late.” Actually, Barnabas told Angelique that Sky was a Leviathan; I have no idea what he’s talking about here.

When Quentin pushes the doors to the PT room open, the left door bangs against the wall and bounces back; Quentin has to put his hand out to steady it.

Once the PT room has changed back to its empty state, there’s a boom mic at top left when Barnabas and Quentin enter the room.

This is the last time we’ll see some of these characters in present-day Collinwood. Don Briscoe and Lisa Richards both leave the show during the Parallel Time story, so it’s the last episode for Chris and Sabrina. This is also Angelique’s last appearance in the present day. Lara Parker has lots to do over the next year, but during the month that takes place in 1970, Angelique doesn’t appear. Tomorrow is Roger’s last episode in the present day, too; he doesn’t show up during the 1970 period.