“I’m going to destroy that thing that’s me in that room!”

Friday, the sixth of March, 1970
at the Altamont Speedway
Tracy, California

Ia! Shub-Niggurath!
The Black Goat of the Woods
with a Thousand Young!

Dr. Julia Hoffman is currently mixing colored fluids, and then pouring the concoction from a beaker into a test tube. It’s called science.

She’s just getting started on this new research project, but she’s already set up an apparatus at her workstation in the Chosen Room, which is suddenly an open-plan hot desk co-working space for the criminally insane. Her job, as always, is to take a handful of deflating plot points and make some kind of dynamite out of it, alchemically turning storyline lead into gold.

And she’s got to work fast, because by my count, this story currently has seven different Leviathan-specific villains that need to be eliminated from the show in the next three weeks, before half the cast decamps to Tarrytown, to film a Dark Shadows movie that nobody asked for.

Jeb Hawkes, that secret ancient man, has decided at the last minute that he’s been wasting his time building up and then destroying a bunch of overlapping groups of death-cult conspirators, when he could have been doing something useful, like telling Carolyn that he murdered her father, and finally pulling the trigger on what is obviously the entire emotional core of this four-month Lovecraft boondoggle.

So Jeb’s got Pinocchio syndrome all of a sudden, and decided that he wants to be a real life human, with feelings and dreams and normal honeymoons that don’t involve turning his bride-to-be into a demonic space octopus and laying waste to the Earth. That’s why Julia is here, playing with chemicals; she’s supposed to fix Jeb’s tendency to turn into an invisble acid-spitting teratologically fabulous murder machine. Apparently, it’s a glandular condition.

And then along comes middle manager and notorious storyline speed bump Nicholas Blair, who takes one look at this story-productive development and kicks it out the door. We are not going to allow this plotline to get any more interesting than it currently is, thank you very much.

Nicholas is one of the true sources of evil on Dark Shadows, by which I mean that he talks like he’s interesting, but invariably grinds things to a standstill. In 1968, he turned the Frankenstein story into an endless series of counter-productive standoffs, and he’s just been introduced into the Leviathan story for the same reason.

So he takes one look at the weird new creative direction that the storyline is flirting with, and he says, “I’m certainly glad that I happened by, doctor, because I believe that your quaint little experiment is about to come to an end.” And then he sweeps all the glassware off the desk and onto the floor.

Julia asks what he’s planning to do with her, and he basically just dismisses her from the storyline, because core cast members are simply not welcome in this story. “Stay away from us,” he says. “Do not interfere in something that is inevitable. You might impart that same information to Barnabas Collins.” And then he helps her on with her coat.

So here we are, I guess, surrendering to the inevitable. We’re all tired of the Leviathan story, and nobody is more tired of it than the Leviathan himself. He knows that his current path leads to the same place that Count Petofi ended up — a once-dominant chaos engine, reduced to skulking around and glowering at henchmen. He wants an alchemical change, transforming him from a once-off antagonist into an permanent role on the show, like Angelique and Quentin.

Now, one of the principles of alchemy is that whatever happens on one level also happens at every level: as above, so below. Achieving material perfection — turning lead into gold — is a way of achieving spiritual perfection, because a purifying change on the physical plane is reflected on the metaphysical plane as well.

On Dark Shadows, “as above, so below” means that confusion and disorder among the writers and producers ends up reflected on the physical plane as well, in the form of actors forgetting their lines, boom mics drifting into shot, and characters arguing about storyline progress.

For example, in this conversation, Jeb is speaking directly with the production team, saying that he deserves to move past the sputtering Leviathan plot, and the exhausted writers — represented here by Nicholas Blair — tell him that he’s not interesting enough to become a main character.

Nicholas:  Your childish pranks are beginning to bore me.

Jeb:  They’re not pranks! I happen to enjoy the way that I am now, and I am going to destroy that thing that’s me in that room!

Nicholas:  Jeb, you cannot do that, because that is all you are. You destroy the thing in that room, and Jeb Hawkes will cease to exist!

Jeb:  How do you know that?

Nicholas:  I know more about you than you do! And I feel that if I go on letting you make certain decisions, our entire plan will fail. Therefore, I have just come to a conclusion.

Jeb:  What kind of conclusion?

Nicholas:  We can no longer wait. The ceremony must go on tonight!

Jeb wants to pivot, and become one of those morally confused characters that make Dark Shadows what it is. He wants to kiss Carolyn, and confess to Julia, and then stand around in the cemetery, yelling and creating new spectacles. That Thing That’s Me is dragging down his long-term career prospects. But Nicholas explains that it’s too late; Jeb’s power set is already established, and this path only leads in one direction.

Other monsters survive the end of a storyline, because they have transferrable skills. Chris is a werewolf who jumps through windows and chews up extraneous characters; there will always be a place for him on the show. Angelique is a spiteful story engine who conjures plague bats from the sky.

And Jeb Hawkes is a doorknob and a sound effect.

Now, we could talk again about how it’s better not to show the monster because what they show could never live up to what you imagine, and similar horseradish, but the fact is that if you’re not going to show the monster, then this is a time-limited experience.

As Nicholas says, That Thing That’s Me In That Room is all that Jeb Hawkes is — a gimmick that was fun for a while, but wore out its welcome. 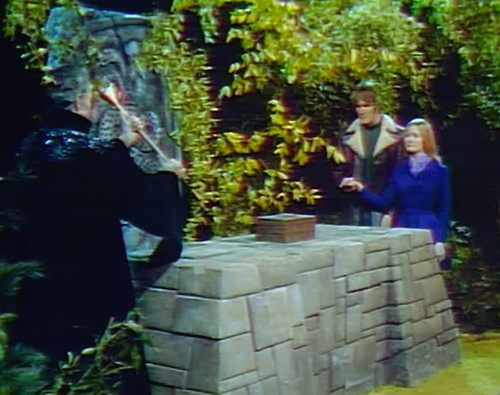 Sorry to be such a downer, but you know me, I always cry at weddings. And this is a particularly sad one, because the bride didn’t even show up.

That should be Carolyn standing there, dressed in something blue, confronting the horror of something very, very old. People have been telling her for months that the antiques shop is suspicious, that the people who live there are dangerous, that she needs to run away, as fast and as far as she can, and most of all, for Goat’s sake, do not marry this monster man. Carolyn has rejected all of that sensible advice, and at this moment, this climax, she should see for the first time what a disastrous mistake she’s made.

But Carolyn isn’t here. Once again, Nicholas Blair has hypnotized the most important character in the scene, using his magic neuralyzer to wipe away any memories or feelings that might give this story some emotional weight.

She just stands there at the altar, a runaway bride whose body stayed behind. After all this time, she still doesn’t know what Jeb is, or what he’s done. She isn’t the one making choices today. So she doesn’t get the chance to answer the storyline’s fundamental question: Do you, Carolyn Stoddard, take this man?

When Barnabas opens Quentin’s coffin, there’s a quick glimpse of a crew member and a piece of equipment behind them.

There’s an ugly edit in the third act, when they cut from Maggie and Quentin kissing to the wedding scene. If you watch carefully, you can see the tiny remnant of a shot of Jeb and Carolyn approaching the altar.

During the ceremony at the altar, there are branches hanging down above the altar. This obscures a majority of the shots, especially with Nicholas, and when Jeb smashes the box at the end, the branch gets in his way.