“Do you know why I brought you back from the grave?”

Who needs coffins? Coffins are for wimps and losers, say the grief-stricken loved ones of Sheriff J. Davenport. 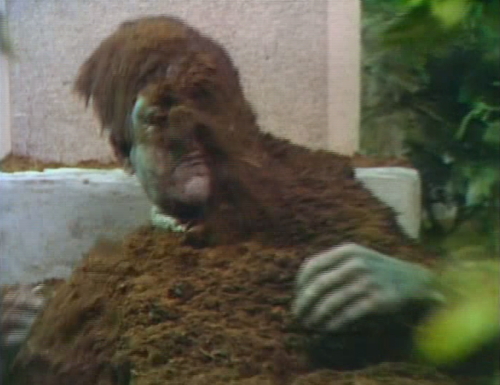 So that’s a choice, I guess, just sifting maybe a centimeter of dirt over the deceased and calling it quits. Admittedly, it’s not for everyone, especially if you don’t plan on reburying him every time it rains, but it does make things easier at a moment like this, when Sheriff Davenport rises from the grave — sits up, really — and goes out to find someone to play with. 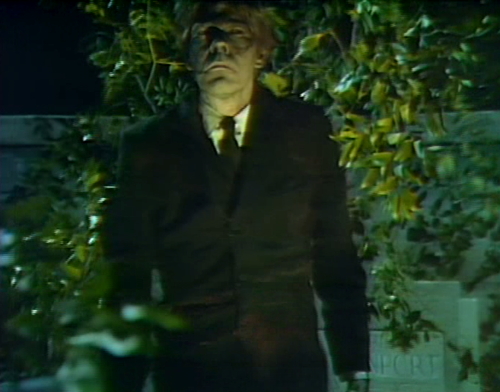 Oh, and look at his sad little zombie face! He seems really disappointed, and with good reason. He just got promoted from Deputy to Sheriff a couple weeks ago, and now he’s been busted all the way to Zombie. It’s like people don’t think Sheriffs have feelings.

And then there’s Carolyn Stoddard, the poor little rich girl, who’s recently lost her father and now everybody’s trying to backseat-drive her grief process. She’s currently in the “I will find out who or what caused his death, somehow I will” stage, and holding.

But today she’s attending a support group for young women whose fathers were killed by monsters, and it’s not helping. “The police will do that,” says Maggie. “Even the state police have been called in. Let them worry about finding your father’s killer.” By the way, the police did not find the guy who killed Maggie’s father; they didn’t even get close. Also, the police have been killed, and now they’re wandering around in the cemetery. This does not inspire confidence.

But Maggie says, “I think you should find something to take your mind off his death,” and Carolyn agrees.

“I may go back to work in the antiques shop,” she says, and then Maggie says, “Well, do you think that work is the answer? I mean, that particular kind of work?”

And Carolyn says, oh my god, can I make one decision? Christ. My dad just died, and everybody’s busting my chops.

Meanwhile, out on the terrace, the police are here — or, at least, the zombie police, which is the only available flavor. And you know what? I think he actually is looking for Carolyn’s father’s killer. Turns out Maggie was right.

Zombie Davenport walks across the lawn, staring at the lighted windows in the house — and then he hears a door opening, and he quickly ducks into the shadows. This is a whole new concept in horror fiction: the bashful zombie.

So Carolyn comes outside for a breath of fresh air, and maybe catch a couple minutes to herself where people aren’t telling her what to do and how to feel. It doesn’t work. She’s not catching a lot of breaks lately.

“What are you doing here?” she says, to the latest towering man-animal who’s decided to loom nearby and make decisions for her.

“I was drawn here by an irresistible force,” he says. “You.”

So this is one of those meet-cutes that isn’t that cute, where a guy kills your father and then drops by with some post-funeral pick-up lines. This is Jeb Hawkes, who arrived in town a couple months ago with some assembly required. Carolyn’s known him under several different names — Joseph, Alexander, Michael — as he’s quickly grown into what is presumably the feature-complete version of whatever he’s supposed to be.

Carolyn:  Oh, I hope you’re not going to tell me that fate brought us together.

Carolyn:  Well, so do I, but I don’t think it had anything to do with our meeting this afternoon.

Jeb:  Ah, but it had everything to do with it. You’ll see tomorrow.

Jeb:  We’re going to be married.

And he just stands there and looks at her, the big dope.

Then Carolyn Stoddard gets that look on her face that sends the clued-in scurrying for the storm cellars.

“You and I are going to be married tomorrow?” she says, snapping her fingers. “Just like that!” Then she takes a few steps away, because she is going to need some open space for this response.

“You have decided that I’m going to marry you. The fact that you and I don’t even know one another is an obstacle that you can apparently overcome with ease. I’m a bit more complex!”

Frustrated, he tries to explain things to her. This is not a promising survival skill.

She turns, and smiles. “And what am I supposed to say to that? Well, Carolyn, this is really your lucky day, isn’t it?”

“You’re not taking me seriously at all, are you?”

She adopts the command voice. “If you don’t leave very soon, I’ll take you seriously, and have you thrown off the estate!”

She walks away, and he grabs her by the arm and spins her around, saying, “I haven’t finished talking to you!” and oh, don’t do that. That is not a thing that you should do, not with Carolyn on the other end of it.

He says, “You don’t know who you’re talking to!” and she looks him in the eye, and snarls, “Are you going to let go of my arm, or am I going to scream?”

And then she stares him down. This is a six-foot-four class-A supernatural alien threat from beyond time who has already murdered a member of her family, and she stares him the hell down, because she is a soap opera heroine, and that is how this genre works. 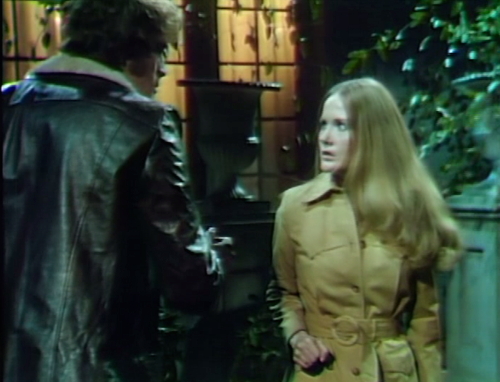 Carolyn Stoddard, annoyed. The guy doesn’t have a chance. 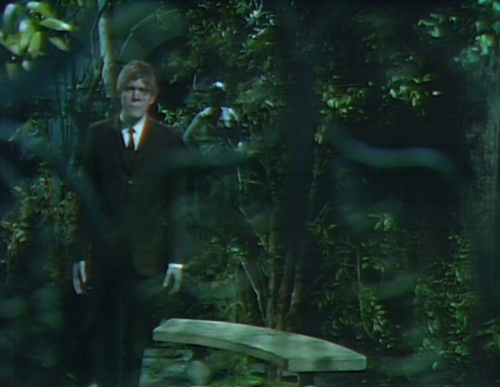 Once the combatants have left the arena, Zombie Davenport emerges from the underbrush, and follows his master to town. I don’t know why the zombie was hiding in the bushes during that scene. He just was.

So that’s our show, today and every day: a parade of love and monsters, ambling around with no supervision. That is Dark Shadows.

Tomorrow: Those Whom the Gods Would Destroy, They First Give an Ascot.

Not really a blooper, but it’s cute: at the end of the first scene, when Zombie Davenport walks out of the shot, he brushes a branch out of his face.

Somebody in the studio coughs when Maggie tells Carolyn that the police will find Paul’s killer.

When Zombie Davenport looks through the gate at the Collinwood terrace, you can see a stage light at the top of the screen.

Just after Carolyn runs upstairs in the foyer, there’s another cough from the studio.

Tomorrow: Those Whom the Gods Would Destroy, They First Give an Ascot.