A man is dead on Dark Shadows, which isn’t exactly stop-press news; over the last year, they’ve stacked up so many bodies that people had to come back to life as a new character, just to kill them all over again. Just last week, three characters died on screen, and only one of them even matters.

Here’s the roll call: Paul Stoddard was killed by a lot of noise in the other room, which rendered him inert and sticky; Amanda Harris died of being cast in a Stephen Sondheim musical; and Sheriff Davenport was murdered at the end of Friday’s episode by a Monster Point of View shot.

Now, when Amanda dies, they actually say that the half-life that she kind of lived over the last seventy years was erased from history, so that the only people who remember anything about her are Quentin and Julia. This was entirely unnecessary, because Quentin and Julia were the only people on the show who cared about her anyway. So it’s kind of rude to make a specific point of deleting her, but on the other hand, I can’t remember who we’re talking about, so whatever.

And then there’s Sheriff Davenport, who is so unmourned that when we see his grave later this week, it says “Sheriff Davenport” on it. He didn’t have a first name, apparently, and it’s too late to give him one now. I suppose he’s lucky he even got a gravestone of his own; they could have just used Jeremiah’s with a Post-It note stuck over it. 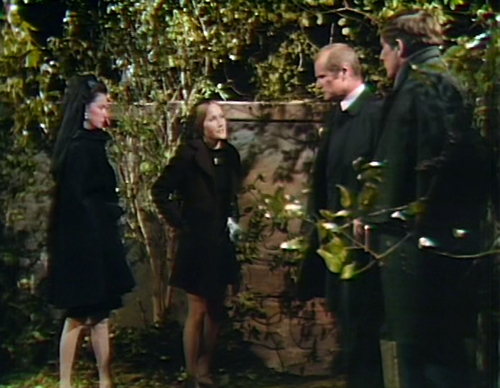 But Paul’s death really counts, and you can tell, because all of a sudden, they start acting like it’s a soap opera.

Soap operas basically organize themselves around five big events: weddings, funerals, New Year’s Eve, charity balls and plane crashes. Those are the moments when they can bring everybody together for a big dress-up party, and all of the storylines get to cross over. If somebody needs to see somebody being overly affectionate with somebody else — which accounts for more than 60% of soap opera storylines — then these big events are when that’s going to happen. That’s what they’re for.

But on Dark Shadows, they don’t dwell on the funerals, because if they did, they wouldn’t have time for anything else. Does anybody remember Carl Collins’ funeral? He was Quentin’s brother, one of the four adult Collinses in the 1890s. I don’t actually remember them even wearing a black armband for Carl. It’s possible they forgot all about him the second he hit the pavement. He might still be there, for all I know, flat on his face in the drawing room. They might have just decorated around him.

But for Paul Stoddard, they actually put some effort into this. Paul is Elizabeth’s absconded ex-husband, and Carolyn’s deadbeat dad, and I know that we’ve started to drift into a pointedly post-Collins phase of the show, but being directly related to two core family members has got to mean something. So today’s episode is structured around Paul’s funeral — something that would be automatic for any other daytime show, but is remarkable on Dark Shadows.

Now Elizabeth doesn’t really have a lot of feelings about Paul’s death, thanks to the convergence of several lunatic plot contrivances. She’s been comprehensively hypnotized by a passel of ancient fiendish crypto-critters, who’ve hollowed her out and then forgotten to fill her up with anything in particular. Don’t worry about Elizabeth. Elizabeth is fine.

But her brother Roger still has control of his faculties, to the extent that anyone does on this carousel of crackpots, and he’s curious to know why an apparently healthy man in late middle-age would suddenly and simultaneously lacerate himself, singe his eyebrows, spray himself with acid, shatter his own ulna, femur, coccyx and clavicle, and then drop down on the carpet, cause of death: heart failure.

Elizabeth strikes a disapproving pose, the picture of a sensible woman trying to discourage her brother’s tinfoil-hat conspiracy theories about motive and opportunity and physical evidence and police procedure. Sometimes people just murder themselves. It’s irritating, she’s willing to admit that, but if you pay attention, it just encourages them.

“I’m sorry, Elizabeth,” he persists, “but you know that Paul was a scoundrel; he was a worthless man. He caused this family nothing but trouble since the day he married you. Let’s not let his death cause more problems. Now, I think we should inquire into it privately, but hush it up publicly. That’s all I meant to say.” 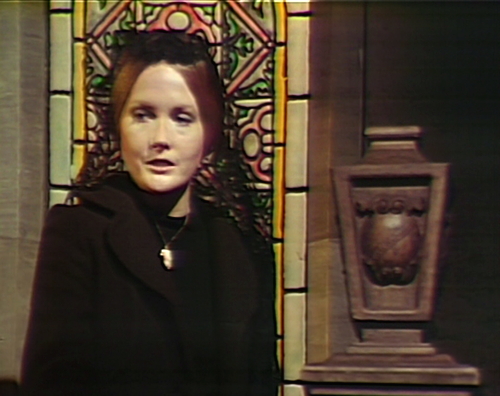 And then there’s Carolyn on the landing, proud and wounded and ready for a fight.

“And you said it brilliantly, Uncle Roger!” she declaims. “All in the Collins tradition. There should be a motto on our family emblem: Hypocrisy above all!”

So here’s a thing we haven’t had a lot of lately: feelings! Ever since the show slipped down the rabbit hole of nihilistic Lovecraftian possession drama, they’ve stopped having scenes like this — two non-hypnotized people, discussing their emotional reactions to an actual event. Pretty much every pairing we’ve seen lately has involved at least one Leviathan construct, manipulating events to further whatever weird set of instructions they pulled out of their ancient cosmic almanac.

And it’s a shame, because the 1897 storyline was an absolute gold mine for complicated Collins family dynamics. Since coming back to the present day, they’ve hardly done anything in that line. I think this is probably the first scene Roger and Carolyn have even had together in a year. But here we are, a family, having dynamics.

And look at this, for a shot, just bristling with hurt feelings.

“My father was murdered!” Carolyn declares, defiantly. “The autopsy told only part of the story. The acceptable part. The part that would hurt no one.” It’s lovely. I mean, it’s not Tennessee Williams or anything, but give the girl a break; her father just died.

Carolyn:  I intend to find out who killed him.

Carolyn:  I loved him, mother.

Roger:  You barely knew him, Carolyn.

Carolyn:  I knew him. And I’m glad I had the chance, because I’m part of him. Mother, surely you can remember loving him. Because you must have loved him once, you must have!

Roger:  Try to control yourself, kitten. It’s all going to be much more difficult if you don’t.

Carolyn:  Collins are not supposed to cry! Well, this is the Stoddard part of me — the part that lets me feel!

So the real joy of this moment is that this appears to be a standard-issue portion of afternoon television. A new viewer who tunes in just for this scene will understand at once that Elizabeth is keeping her composure, because she isn’t actually sorry that Paul is dead.

Obviously, there’s some reason why she wouldn’t be sad about her husband’s murder, and the new viewer would instinctively start running through a list of possibilities. Maybe she’s the one who murdered him. Or maybe she didn’t murder him, but she knows who did, and she’s relieved, because he knew some kind of terrible secret and was just about to tell the police. Or he was going to tell Carolyn! Maybe he found out that Carolyn isn’t really Liz’s daughter, and that’s why Liz is having such a hard time connecting with her now! Or maybe she found out Paul’s secret, and he was going to murder her, but then it backfired and he got killed instead, but in order to explain this to anyone, she’d have to reveal the secret — which is probably something about how her tycoon con artist grandfather stole the money that became their family fortune, and if anyone finds out, they’ll have to give the mansion back to its rightful owners, who were forced out and now live, seething, in a tiny bungalow by the sea, waiting for some reversal, like a mysterious death in the family that they are right this minute trying to investigate, while they examine the document that recently fell into their possession, which — if they could only understand it! — might be the key to unlocking this entire sordid tale of money and power and betrayal and shattered dreams, I mean it has to be something like that, doesn’t it, I mean it just stands to reason.

So that’s what’s going through the new viewer’s mind, as they slip on the appropriate mindset to enjoy watching this timeless tale unfold in all its terrible dramatic intensity. God, just wait until they find out that Elizabeth has actually been hypnotized by a race of giant space hedgehogs.

At the start of act 1, Jeb trips a little bit on some of the detritus; he plays it off, successfully, by kicking something and pretending that he meant to do it.

In the graveyard scene, when Carolyn walks forward and says, “He was weak and he was confused, and he didn’t know what to do,” the camera tilts up too much, and you can see the top of the black backdrop, with a studio light peeking over the rim.

Jeb says that Barnabas can give Carolyn away. Barnabas protests, “I told you that the book won’t allow me to do that!” Barnabas didn’t tell Jeb that, when they talked about this in Friday’s episode.