“I am concerned with the safety of other people, not what’s right.”

Michael is staring at Maggie Evans.

Maggie is a pretty young woman who used to be a waitress, and now works at Collinwood as David’s private tutor. Michael is a seven-week-old baby monster who came out of a time travelling box, and will someday cleanse the Earth of its human population. Everybody has to be something, I suppose.

Michael’s come over to the house today, unannounced and uninvited, because he wants to play with David and be insolent to grown-ups. Maggie was in the middle of a lesson with David, but now Michael’s here, and she’s not sure what to do.

The problem is that Michael is such an odd little boy. He says things that sound polite — “You wouldn’t do that, would you, Miss Evans?” he says — but he keeps his eyes locked on hers, unblinking, in a way that people generally don’t, unless they’re planning to murder you.

Maggie finally decides that it’s okay — she’ll grade David’s paper, and the boys can play in the drawing room. But as she’s gathering up the papers, she feels Michael’s eyes, still following her. She turns, and sees that he hasn’t moved; he’s just standing there at the door, staring her down.

She tries to collect herself, and says, “Michael, is something wrong?”

He keeps sizing her up. “What could be wrong, Miss Evans?” he asks, with a faint smile.

“You keep staring at me.”

Anxious to break the tension, David cries, “I’ve got it! We can play Wall Street. Do you like Wall Street, Michael?”

“It doesn’t matter what game we play, David,” the boy sneers. “You know that.”

So, yeah, of course they’re going to play Wall Street. This kid is the living embodiment of the Big Short. 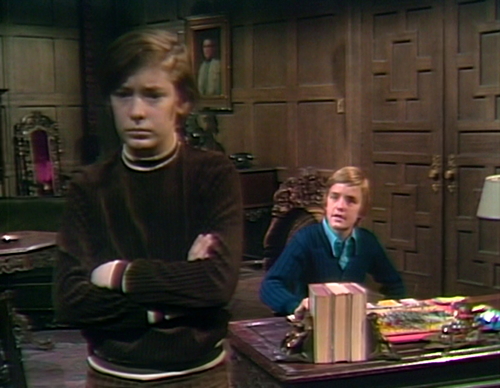 So they’re in the middle of the game, and David gets mad, because Michael is creating a credit default swap market that bets against the collateralized debt obligation bubble.

David:  I saw that, Michael. I saw you take some money from the bank.

Michael:  Because I have to win.

David:  You have to? Then there’s no point in playing the game.

David gets up from his chair, and turns away. Michael uses his command voice.

Michael:  Sit down, David! You haven’t finished your move.

Michael:  LOOK at me, David!

And then Michael just stares at David, until he obeys.

Michael:  You will sit down. And you will finish the game.

David:  And you will win.

Michael:  And I will win. 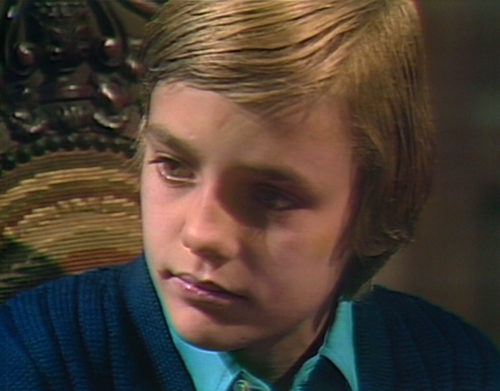 So Michael’s figured out the real purpose of board games, which is a relief, because I thought nobody ever would.

It’s like the way that kittens play — jumping on each other, fangs and claws out, tearing at their playmates with an aggression that would be alarming if it wasn’t so adorable. They’re fighting, but it’s play-fighting — just biting hard enough to learn how hard you can bite somebody before it hurts.

Obviously, the object of this exercise isn’t to understand acceptable boundaries. It’s to find out how hard you need to bite somebody, when you really do want it to hurt.

That’s why Michael wants to play — with David, and with Maggie. He wants to know what it feels like to dominate other people — through luck, skill, brute force or insolence. He wants to know how hard he should hit somebody when he wants them to stay down.

But that is not the weirdest thing about this board game. 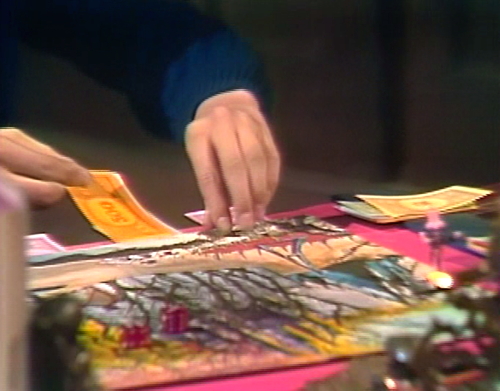 The weirdest thing about this board game is look at what the board looks like.

That is not a board game. That is a bleak, eldritch landscape from This Island Earth crossed with Duck Dodgers in the 24½th Century. And yet here they are, rolling dice and fussing around with Monopoly money, as if there are rules dictating how you behave when you sit around a table and stare at rejected cover art from Stirring Science Stories. What is going on with this play date? 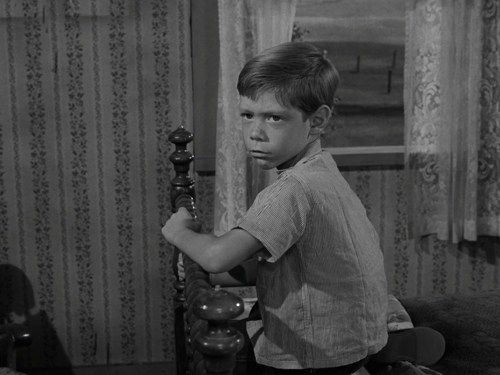 Now, back when we started this storyline, it was supposed to be based on H.P. Lovecraft’s The Dunwich Horror, which features a quick-growing hybrid child — half human, half Elder Thing, preparing for his chance to rip the dimensional veil asunder and turn the world over to a blasphemous new regime. But The Dunwich Horror doesn’t provide a lot of details on the childcare; for the most part, Wilbur Whateley’s wonder years pass by in a time-compression training montage.

But as a daily dose of afternoon television, Dark Shadows has to slow down and give us a sense of how this pint-sized destroyer of worlds slouches towards Bethlehem to be born. It turns out that it’s a lot like Anthony, from that Twilight Zone episode about the little kid who can wish you into the cornfield.

The episode’s called “It’s a Good Life,” from 1961, and it’s pretty much the how-to parenting guide for Megan and Philip, and anybody else raising an all-powerful demon child.

In the story, Anthony Fremont is a six-year-old boy from Peaksville, Ohio, who — for no particular reason — has been born with godlike powers. He’s cut the town off from the rest of the world, closing the roads and cutting off the phone lines. He doesn’t like singing, or electricity, or barking dogs, so he’s made all of those things disappear. He hates being scolded, and he only wants to be told that he’s good, and that everything he does is good. And he can read people’s thoughts, when he wants to, so everybody has to make sure that they’re always thinking good thoughts.

If they don’t — if somebody displeases Anthony in any way — then he’ll wish them into the cornfield, which means… well, nobody’s quite sure what that means. But whatever it is, it’s a one-way trip. 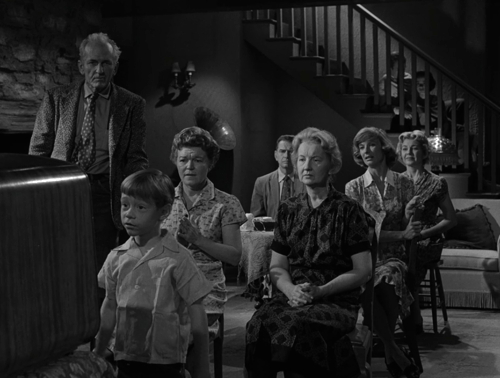 By the time we see them, the surviving townspeople have settled into a grim, terrified death march. Everybody knows their time will come, and there’s no hope of escape; the only thing they can do is try to put off the inevitable for as long as they can. So they swallow their fear and horror, and tell him that he’s a good boy, even as he creates and destroys twisted forms of animal life in front of them, and they wonder what fresh form of torment he’ll think of as he gets older.

Anthony’s life is basically Michael’s dream. This is what Michael is trying to achieve — unquestioning dominance over all life and matter. 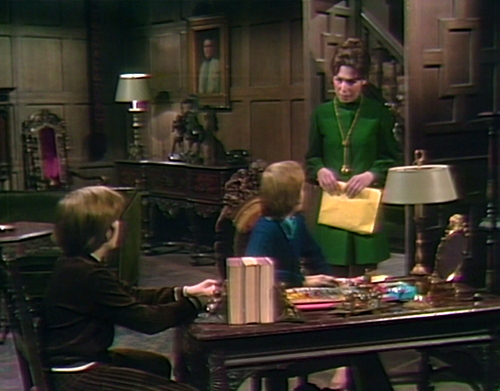 When Maggie comes back to talk to David about his illegible essay, it’s a fresh opportunity for Michael to express himself.

“David,” she says, “if Michael will excuse you for a few minutes, I’d like to talk to you about your theme.”

“Michael won’t,” the boy mutters. Her eyes flash and her lips tighten, because Kathryn Leigh Scott learned a lot about emoting when she was playing Kitty Hampshire a few months ago.

Michael:  You really should let us finish, Miss Evans.

Maggie:  Please don’t tell me what to do, Michael.

Michael:  David’s little lecture can wait, can’t it? Besides, I don’t know what’s so important about handwriting. I’ve never seen a grown-up’s I can read. So why don’t you just go back to your room?

Maggie:  Apparently you didn’t understand what I said earlier. You do not give me orders. David is in my charge, not yours.

Michael:  (offering a pacifying look) I don’t know what you’re getting so upset about. We said we’d come to you as soon as we’d finished.

And this works, because Michael has learned a secret that every teenage god-monster learns — if you can kick the adult off balance, then you can switch your tone and make them tumble into a pit they’ve dug themselves. 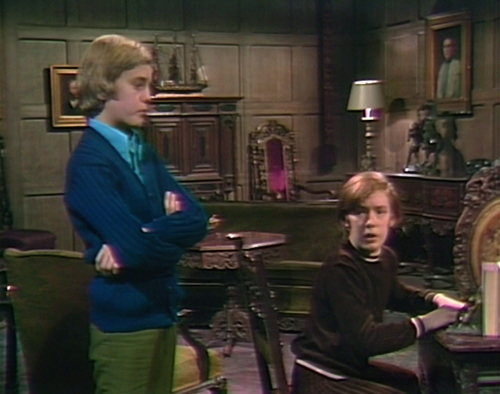 Of course, as soon as Maggie leaves the room, he’s got some new activities planned. “I hate her!” he declares. “She’ll be sorry!” David says he won’t hurt Maggie, but the monster assures him, “Who said anything about hurting her? As soon as it gets dark, we’ve just got a nice new game to play, that’s all.”

He’s getting off message, a problem that his handlers will have to deal with very soon. They’ve got plans to dominate a much larger area than just the Collinwood drawing room, and picking a fight with Maggie doesn’t help Michael’s cause. He’s just doing it because he can’t help himself — he has a pathological need to win every encounter. 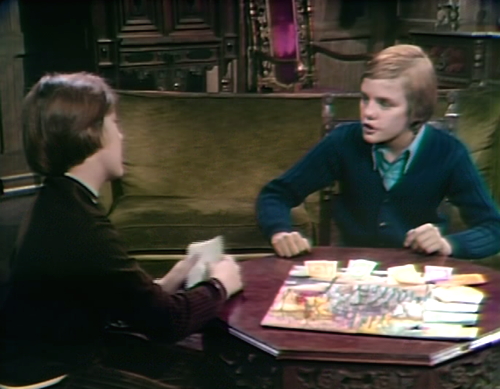 The next morning — apparently still hip-deep in this grueling, two-day marathon board game — David’s father manages to rub Michael the wrong way, and now Michael wants to punish Roger too.

And that’s the moment when David becomes Anthony’s parents, when he realizes that this creature that he’s encouraged will never stop punishing everybody else for the crime of having a will of their own. The violence and terror and bullying will never stop.

Michael has to win at Wall Street, even if it means openly cheating and stealing other people’s money. He has to push women around, to show that he’s boss. And if you hit him, he will hit back, ten times as hard.

And David, as the speaker of this particular house, is stuck — like the Fremonts, like the Todds — supporting a dangerous monster with silence, and obedience.

Monday: The Shark, and How to Jump It.

One of the cameras has a fault; there are a few places where the picture blinks out for a second, and there’s a purple line across the screen in Philip’s scene at the beginning of act 3.

When Maggie tells David to finish his theme and sits down, we can hear Michael clearing his throat in the foyer, about thirty seconds before his entrance.

When Roger enters the drawing room in act 2, there’s a boom mic overhead.

Philip says that he’s come to pick up Michael, and Roger says, “Oh, yes, come in. He’s in the drawing room.” As Philip walks past him, Roger adds, “With David.”

Monday: The Shark, and How to Jump It. 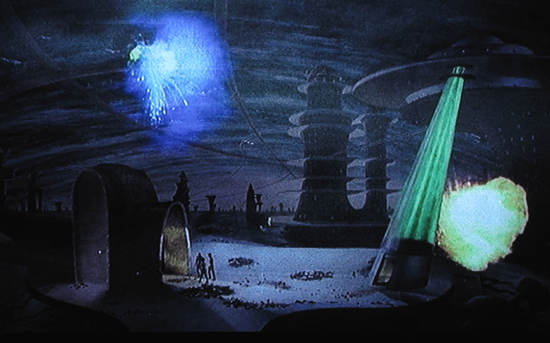