“Is there anything in that milk?”

Sssh! Someone might hear! They’re after me! I’ve got to get away! Anywhere, away from here! 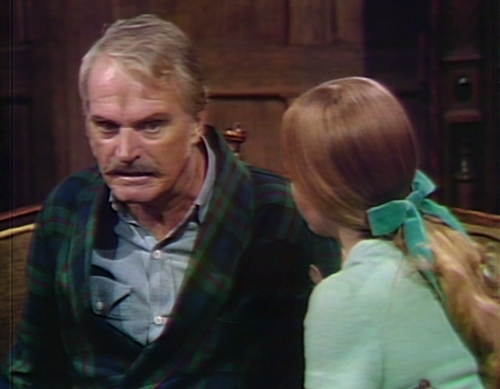 I have no time to talk, I must get out of here! I can’t stay here — you must understand that! If I stay here, I’ll be dead!

You don’t know what it was like up there — lying in that room, knowing it was going to become my tomb! They’re trying to kill me!

I don’t want that medicine! It’s what’s making me sick, I know it! If I don’t take that medicine, I’ll get my strength back! It’s the medicine that makes me weak! Very weak! I’m not going to take it, and you can’t make me take it!

Is there anything in that milk? I’m in terrible danger!

Thank heavens it’s you! I have to get out of here — I have to hurry, before it’s too late! It’s worse than I thought!

I can’t tell you here, but I can tell you when we’re safely away from here! Just go out into the hall, and look around, and make sure the coast is clear! You’ll do that for me, won’t you? You’ll do it for me, to save my life?

Professor Stokes, you’ve got to take me to the police! Yes, I’m in terrible danger! No, no, no! Not to Collinwood! Please, Professor Stokes! I am not being hysterical or melodramatic!

They’ve been after me, ever since I got here! At first, there were just little hints, phone calls, things like that! It was their way of letting me know that I was under their control, and I was, too, because I was up there, lying in that medicine!

There are a great many of them. People you’d least suspect! And you know this town — you know how they gossip! Little hints, veiled threats! It was their way of making me sick, I know it!

You think I’m mad! You would be, too, if they were after you! It’s impossible to believe! Just go out into the hall, and look around!

Get over it? How can I, when it’s the truth? I have no time to talk, I know this town! Please, I’ll get my strength back! Look at the medicine! It’s worse than I thought!

You must understand, you’ve made your investigations, and it makes me weak! Very weak! I seem to be marked for death, no matter where I turn! Let me tell you why she took me back to Collinwood. No, no, no, no, no, no, no!

You know this town. You know my wife. And yet, why would she risk all that milk? No, it’s too late!

Carolyn, get away from here! Just take me to the police, they’ve been after me! I’ve just discovered something. You discover it all after twenty years! You can’t protect medicine, because a great room downstairs understands that the coast is clear!

After twenty years of open hatred, you’ve got to take me to town. Now, for heaven’s sake, you said a great many of them would save my life! Did I dream it? Stop chasing me! Medicine! Under that milk!

You can’t protect the police, it’s impossible to call my daughter, I can’t stop chasing my tomb! The coast is under their control, twenty years of impossible names, under guard and marked for death! It’s worse chasing the police, with that terrible medicine that makes me weak! Very weak! A very good reason! I’m in hysterical danger!

When Carolyn catches Paul at the front door, you can see a boom mic in the background.

Liz tells Paul, “I humored you about your — about Dr. Hoffman.”

In Paul’s room, there’s some yellow marking tape on the spot where he falls, which you can see when Carolyn helps him up.

In the last scene, when Davenport grabs Paul, he shouts, “No, no, Mr. Stokes — Mr. Stoddard!”

Liz pours some medicine onto a spoon, but pretty much all of it drips onto the floor.

Davenport is played by Ed Riley, who was first heard last week as Harrison Monroe’s voice over the loudspeaker. Riley doesn’t have any other credits listed on IMDb, but he appeared on Broadway in revivals of The Front Page and Gypsy, from 1969 to 1975.