“I wonder if you are myself.”

“Do you enjoy your new life, mon cher?” says the pteranodon, hovering prehistorically in the foyer. “An eternity of darkness, feeding like a beast in ze night on human blood alone!”

She doesn’t say this with her mouth, of course. That is not the pteranodon method. She speaks only in the language of the eyes, and aviation. 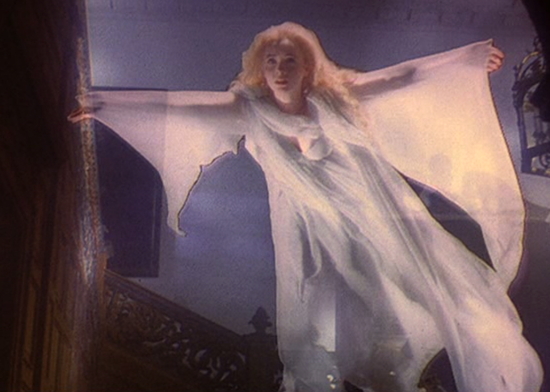 It’s not her fault, really; pteranodons aren’t known for their ability to ask sarcastic questions in a French accent. Besides, they only had her up on the wires once, and they’ve used the footage in four different episodes so far. So she doesn’t do lip synch. She just sort of hangs there, and dialogue emanates.

“Feared and reviled by every living creature,” she continues, aerodynamically. “And anyone who dares to love you shall DIE! This ees Angelique’s gift to you, mon cher! Her curse! And no one shall undo eet!” She’s upset, is what she’s trying to say. Angeliques don’t deal with extinction well. 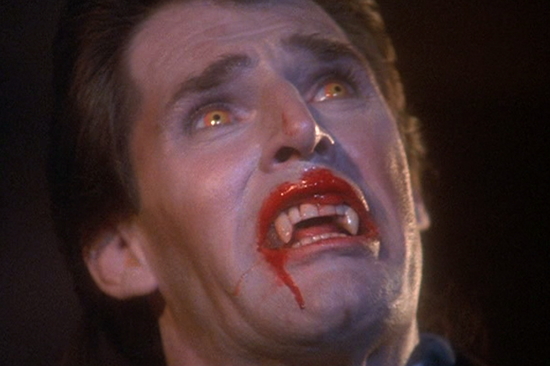 So this is what it’s come to, on Christmas Day 1969. An orange-faced clown with candy corn contacts, looking up in confusion and disbelief as this vision from the late Cretaceous makes fun of him for getting cousin blood on his nose. It’s not everybody’s idea of a holiday special, but it’s the best we can do.

Today’s episode of Dark Shadows was pre-empted so that ABC could bring you some traditional Christmas basketball, and on pre-emption days, we watch another episode of the appropriately ill-fated 1991 Dark Shadows revival series. Here’s the previous episodes, if you want to catch up. We’re currently on episode 10 out of 12, which is plenty of time for the show to start delivering on the romance and thrills that they’ve been promising us. Somebody needs to explain to them that suspending an actress eight feet in the air is not the same thing as suspense.

We’re currently in the 1790s, where governess Victoria Winters finds herself stuck at work two centuries early. Vicki’s currently in lockup on a trumped-up witchcraft charge, while the 18th century Collins family exterminates itself. On the whole, going backwards two hundred years has been a plus for the program, which is getting a belated grip on what it’s trying to do.

But we’re running into a problem that bedevils any adaptation, revival or reboot: how faithful they’re supposed to be to the original source material. Obviously, the new version can’t be a shot-for-shot remake, because otherwise why even bother, but how do you decide what to keep and what to throw away? And in this case, I honestly don’t understand how they’re making that determination. 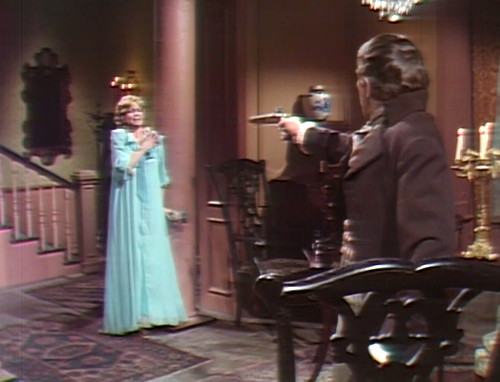 I mean, you’d think that if there was one thing they’d make sure to keep in the new 1795, it would be Angelique’s curse that turns Barnabas into a vampire. This was one of the great moments of the original story. Barnabas’ fiancee Josette was ensorcelled into a union with his uncle, leaving a marriage-minded Barnabas at the mercy of the sorceress. Angelique set up housekeeping with Barnabas for a blissful couple of weeks, until he realized that she was the author of all his pain, and shot her in the shoulder.

Thinking she was on her way out, Angelique leveled a double-barreled curse at him, as follows:

I set a curse on you, Barnabas Collins! You wanted your Josette so much? Well, you shall have her! But not in the way that you would have chosen. You will never rest, Barnabas… and you will never be able to love anyone… for whoever loves you will die! That is my curse, and you will live with it — through all eternity!

And then the flappy marionette bat came through the window and smacked our hero right in the jugular, turning him into the creature of the night that 16 Magazine readers loved so unwisely and so well. 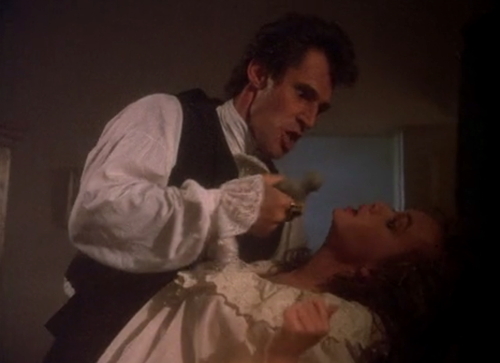 But that was the old show. In the 1991 version, they thought it would be way more interesting if Barnabas just randomly strangled Angelique to death in the middle of an argument, and dropped her on the floor.

Because then they could have dead Angelique appear to Barnabas ten minutes later pretending to be Josette, who suddenly turned into a Josette vampire and bit Barnabas and then transformed into a flappy bat and flew away.

And then she could deliver the actual curse dialogue halfway through the next episode, while she’s appearing as a non-sound-synched avian reptile, because why burden people with all the compelling dramatic material in one scene when you can smear it awkwardly across several episodes? 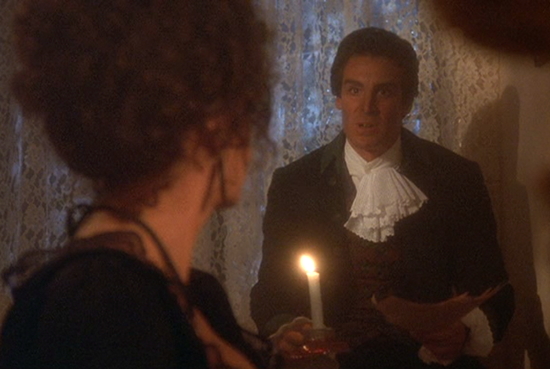 So I’m sorry but it is war between 1991 Dark Shadows and me, because this episode is terrible and they have ruined Christmas. It begins with a ten-minute parade of second-tier characters that makes me feel like there is no justice or reason in this vale of tears. They were just getting a handle on the idea of pointing the camera at their most appealing characters while they still have some, but this episode takes that idea back behind the toolshed, and we never see it again.

The evening begins with pop-eyed nonentity Peter Bradford hearing about Barnabas’ tragic death from Josette’s aunt Natalie, and then they go upstairs to Vicki’s room to rummage through her belongings. They look at the Collins Family History that she brought with her from the future, and Peter finds the journal entries that she wrote about how she came back through time.

“Countess, there is no reason to invent such a tale,” he cries, brandishing the pages. “In her present predicament, it only works against her!” Which is fine, except why are we doing book reviews on Vicki’s diary right now? The main character of the show just died in a brutal bat accident.

In fact, there are four main characters — Barnabas, Angelique, Josette and Vicki — and we don’t see any of them for the whole first act. We see Peter and Natalie’s literary salon, Joshua and Andre’s search for the animal that attacked Barnabas, and a family meeting about how they’re going to cover up the death. There’s a nice long scene with Naomi grieving over her dead sons, which would be great if I gave a damn about Naomi.

And then they carry Barnabas’ coffin in the dead of night to hide it in the back room of the Collins mausoleum, and before you know it, it’s the end of the first act, and we’ve burned through ten minutes of prime time with nothing to show for it.

Several scenes into act 2, they finally put a scene together that I would consider worth watching. In the revival, Vicki and Josette are played by the same actress, leading to the following scene, which I respect for its stubborn determination to do the strangest possible thing.

Josette:  I told you once before how I seem to know you, as I know myself.

[Vicki nods. Note: I don’t remember Josette ever saying this.]

Josette:  Well, now, though my head spins to imagine it, I wonder if you are myself. Myself, in two hundred years.

Vicki:  Is it possible?

Josette:  I no longer know what that means anymore!

Yeah, that makes three of us. And then, this.

Dead Barnabas bangs on the inside of his coffin until it swings open, revealing him lying inside, shot once again from the perspective of someone looking straight up his nose.

And this, for me, is the moment that just shatters any goodwill the show has earned over the last few episodes. There was a specific directorial choice from the very beginning of the show to shoot Ben Cross from below, in order to make him appear taller and more imposing. I don’t think this works, because it means we’re constantly staring all the way up his nose, which is a perfectly good nose but doesn’t deserve this kind of special treatment.

But now, right now, Barnabas is lying on his back in a coffin. Shooting him with sinus-cam doesn’t make him look bigger; it just seems like the director is really hot for the inside of his nose. Also the contacts, and the hissing.

I do not understand the concept of hissing vampires, and I refuse to try. Werewolves growl and zombies moan, and this is scary because they are essentially unstoppable. If you hear a werewolf growl then you’re basically already dead, and if you hear a zombie coming then there’s probably several dozen all around you.

But a vampire is a guy — a strong, bloodthirsty guy, but still a guy — and alerting you to his presence is not tactically advantageous. A hiss means “stay away,” not “come closer so I can attack you.” A vampire looks and acts like a seductive dude, who flashes his fangs at the last second and hits you with a sneak attack. Hissing is not stealthy.

The remaster isn’t doing his makeup any favors, by the way. I know that TVs and computer screens are better now than they were in 1991, so maybe the white and orange clown of the living dead look played better at the time. But it doesn’t look good now. It looks rotten.

And then he runs from the mausoleum and WHAT ARE YOU DOING WITH YOUR CAPE? Stop playing airplanes! You don’t even know what airplanes are!

Jesus! I should not be giving remedial vampire advice in episode 10. Revival series, you have had plenty of time to think about how to make a vampire look cool. This is not the way!

And then the whole thing just falls to pieces. There’s a lot more sinus-cam and rushing about making random animal noises. 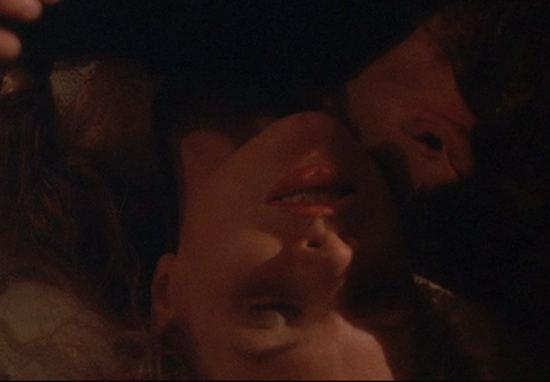 Then he finds Millicent, who is played by Carolyn, and he leaps on her and bites her throat, which she finds terrifying for half a second and then starts making sexy orgasm sounds. This is a really gross rape culture decision based on the idea that women who get raped should just lie back and enjoy themselves, which I had really hoped we’d left back in the present day.

That’s when they do the Angelique pteranodon thing, and then Ben finds Millicent’s bloodstained and sexually satisfied corpse, and after that, they do a long Jack the Ripper sequence where Barnabas attacks a prostitute because why not. And there is literally nothing on screen that we haven’t seen before.