“I don’t believe that she’s not worried about Philip, either.”

Things look bleak for the global Leviathan conspiracy. The ancient book of prophecy has been stolen. The child is sick. The boss is spending all his time punishing the Chosen Ones. It’s only been two weeks, and the organization is falling to pieces.

We need a firm hand at the wheel, a steady leader in an unsteady world. We need a thirteen year old.

Carolyn is hanging around the antique shop, selling nothing to anyone, when her boss hurls herself through the door.

“Someone’s coming to KILL me!” Megan screams, and then rushes around the room, twirling and shouting and doing her best impression of a Woman Who Thinks That Someone’s Coming to Kill Her. It is not a subtle performance. It’s a performance that could be seen from low Earth orbit.

Carolyn grabs her, shouting, “Megan, get hold of yourself! No one’s going to kill you!” which I wouldn’t be that confident about if I were her.

Megan shrieks, “Let GO of me, MY KILLER’S ON THE WAY!” and then rushes upstairs, never to be seen again. This happens with fictional characters occasionally; they get a weird idea in their heads, and the only thing to do is give up and start writing about somebody else. 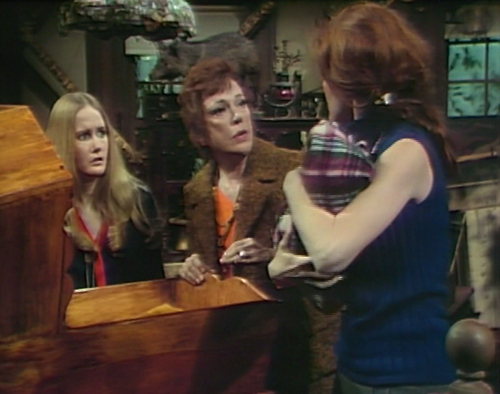 Then Julia walks in the door, and yeah, maybe she is here to kill Megan. I mean, it’s more likely than the idea that she wants to buy something from this dusty junkpile. I’m not sure why everyone is suddenly obsessed with procuring more old crap when they already live in a house that’s stocked to the gills with old crap. It’s 1969; buy something colorful.

Carolyn tells Julia that the baby is sick, suffering from a high fever that has apparently lasted for two full days. When Julia tries to examine the sprat, Megan somersaults back down the stairs, snatching the baby out of his crib, and clutching him to her heaving bosom. This is what she does for a living now, just rushing around in an unprompted panic.

She says she’s got to run away with the baby, so the “someone’s coming to kill me” delusion is still in effect. But Carolyn reminds her that she can’t go anywhere until Philip comes home, and all of a sudden the tension drains out of the room. The spooky music cue dies away, and Megan returns to normal, or at least back to her typically elevated baseline.

Julia asks if she’s worried about Philip, but Megan assumes a sunny expression, and says that Philip is just out getting some merchandise. Then she walks upstairs with the baby, a fake crisis averted, three minutes after the nick of time.

With Megan gone, Carolyn and Julia are left standing around on somebody else’s set, trying to fit together the pieces of a shattered storyline.

Carolyn:  What do you think is the matter with her?

Julia:  With her, or with the baby?

Carolyn:  Well, both of them, I would say.

So that’s where we are, right now. The best characters on the show are stuck standing around, gossiping aimlessly about the worst characters. Julia tries to  get the scene back in gear.

Julia:  Perhaps she and Philip have been working too hard, trying to get the shop in order. Or perhaps the strain of taking care of the baby has triggered some hidden fear. (She sighs, and shrugs.) Who knows?

Carolyn:  You don’t think that there’s any truth in what Megan is saying, that someone is trying to kill her?

And then the scene kind of limps to a close, and we move on to something else.

Back at Collinwood, we find David Collins, a young man who — after all this time — still does not understand the difference between right and wrong, if there is one. He went to the antique shop the other day, yet another innocent consumer drawn by the irresistible lure of bygone merchandise, and he happened across a big leather-bound weapon of mass destruction. This is “the book,” an unreadable tome in an indecipherable script.

When David was leafing through the book in the antique shop, he ripped a page, and then made the odd decision that he would steal the book, so that nobody would know that he tore it. The other option at the time was to close the book and saunter away casually, which is easier to get away with than trying to stuff a twenty-pound hardback under your shirt.

But here we are, with the evidence. Amy asks what he’s going to do with it, and he says he’s going to burn it in the drawing room fireplace. This is also not a great strategy, because it’s enormous and has a leather cover, and also this is the drawing room. Sometimes these people forget that they live in an enormous mansion which has entire closed-off wings that nobody ever goes into.

But David’s impulsive like that; his plan is to burn the book, and then fake his own death and head for Mexico, laughing maniacally. He’s in Maine, so making for the northern border would be a lot easier, but the heart wants what it wants.

Amy tries to talk sense to him, and they grapple with the book, which falls onto the desk and opens to the centerfold. This is a picture of the Naga, the four-headed snake — a creature without a soul, and the emblem of the Leviathan people, whoever they turn out to be.

David stares at the picture, and good ol’ cue 31 kicks up — kettle drum, woodwinds, the whole works. That means he’s been instantly hypnoconverted into a member of the Leviathan gang, who are plotting to slaughter all human life and replace us with a race of twisted demon pig weasels. This is about six times less dangerous than David would ordinarily be, so it’s actually a positive step, as far as humanity is concerned.

Suddenly, David starts bossing Amy around, and there’s a bit of dialogue that I’m kind of in love with.

David:  Amy, you stand outside the door and see that no one comes in while I’m reading the book.

Amy:  While you’re what?

Amy:  Then read some of it for me.

David:  You’re forbidden to hear any of it.

So that’s how you do that. And then he sits down and starts reading about how those who have been hidden so long shall rise and show themselves.

Now, the odd thing about this moment is that the plot point is one of the major tropes in H.P. Lovecraft’s work, but it’s presented in a way that’s basically the opposite of what Lovecraft stories are actually like.

Lovecraft characters are always being hypnotized by books; it’s one of the major things that they do. Somebody gets curious about an ancestor, or they’re an academic who comes across a quaint and curious volume of forgotten lore. And they slowly become more and more obsessed with the books and letters and diaries that they’re able to piece together — an intellectual endeavor that leads them, step by step, to the threshold of things what man was not supposed to know.

But in Lovecraft, this happens slowly, as their curiosity or lust for power takes hold of their consciousness. It’s a gradual process, based on a character flaw.

But David is just a kid, who doesn’t really have much interest in this knowledge. He used to run around the house staring into a crystal ball, but that was years ago; now he patronizes small businesses and shoplifts. So his instant conversion has nothing to do with his character. It’s not a metaphor for anything in particular.

So these feel like empty gestures, so far. Barnabas ran across the Leviathans in the woods, while he was thinking about something else. Megan and Philip qualified as the Chosen Ones by opening a box that Barnabas practically forced them to take. And now David, apparently by happenstance, falls instantly under the sway of a book that he was just about to burn in the fireplace. Joining the Leviathans isn’t a choice that people make; it’s just a thing that randomly happens to whoever’s on the show that day.

And honestly, they can’t get a handle on what anybody is concerned about. When we get back to the antique shop, Carolyn asks if Megan still feels like somebody’s going to kill her, and Megan awkwardly says no, and I have no idea whether she means it, not that it matters. The baby’s still sick, presumably, and there’s no sense of purpose.

Megan says that she’s grateful for Carolyn’s help, and Carolyn says, “I wish I could do more, like find that book. I just can’t seem to get onto anything there. It’s as if someone were deliberately concealing something.” Which is true, someone is, but where do we go from there? 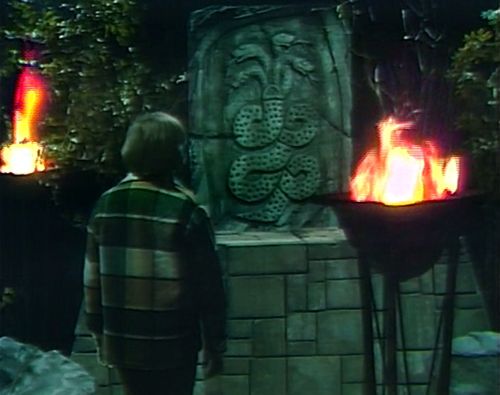 Well, David goes to the altar in the woods, which is open for business 24 hours a day. He stands in front of it and declares, “I am one of you now,” and the stone splits into two sections which silently draw away, revealing a hole that David can crawl through. In tomorrow’s episode, he finds there’s a hidden cellar under the altar, where he finds some leaves and skeletons, and he hears weird voices, and then he just loses consciousness, falling to the floor in a swoon.

When Carolyn approaches Julia at the start of act one, they cut to a camera that’s still zooming in to settle on a close-up of Carolyn.

You can see the boom mic in act two, when Megan walks downstairs into the antique shop.