“Don’t touch me! Let his eyes tell me what to do!”

It must have been hard, over the last several years, to always play the good girl on a show increasingly inhabited by loud ladies. Kathryn Leigh Scott started out on Dark Shadows as waitress Maggie Evans, who was originally supposed to be a tough cookie, but mellowed fairly quickly into the sweet girl next door, and stayed there.

The show’s writing team turned over several times, early on — from Art Wallace to Francis Swann to Ron Sproat and Malcolm Malmorstein, in less than six months — and when the writers change rapidly on a soap opera, you’d better have a really firm grip on your character, or you risk drifting into just playing a version of yourself. That’s what happened to Roger, who started out as a villain and got himself nerfed all the way into harmless gay uncle. Maggie was a cynical young woman taking care of her alcoholic dad, but those rough edges got sanded off clean by the time Barnabas emerged from the mystery box.

And then Julia happened — a high camp trickster, whose priorities are finding her light, getting her hands in the shot, inventing facial expressions and paying attention to other actors, in that order. She was the pioneer loud lady on Dark Shadows, establishing a no-holds-barred theatrical style that chased all the nice girls off the stage.

In 1795, other actresses got to be louder and crazier — witch-vixen Angelique, obviously, and angry Aunt Abigail, and the eternally teetering Millicent. After a while, loud lady became the default setting for new characters — Eve and Magda and Judith and Jenny and Laura and Minerva and Charity Trask, all of them strutting and scheming and getting into fights on the regular.

But Kathryn Leigh Scott was stuck in the nice girl persona — the kidnapped Maggie, the spellbound Josette, the innocent Rachel. She’s spent the last two years being upstaged by one vixen after another. And then there’s Kitty.

Kitty Soames, the gold-digging governess, who seduced her well-off employer, stealing his heart and his title, and apparently ditching the kid who she was hired to teach in the first place. Her first husband is gone, and she’s run out of money, so now she’s on a mission to marry someone in a mansion. I haven’t paid a lot of attention to Kitty and her many devious facial expressions, and it’s about time I did. Kitty is Kathryn Leigh Scott’s chance to really go nuts on national television, and she makes the most of it.

There was a scene in yesterday’s episode that I didn’t really discuss because I had other things on my mind, so I want to go back to Kitty’s big entrance, and spend a little time digging into what she’s doing with her head. This is a more complicated subject than you might expect.

Tonight, Kitty is determined to get wealthy widower Edward away from his ledgers and out into the moonlight, where she can make some material social progress. Dressed in a beaded gown, she frames herself in the doorway, constructing her biggest smile, and cocking her head to the side in a way that she clearly thinks is spontaneous and inviting.

She chirps, “Ah! Good evening, Edward!” as if she just happened to be passing by. He looks up from his book for about half a second, says “Good evening, Kitty,” and then returns to the finances.

Kitty presses her lips together for a second, which is what she always does when one of her little gambits fails to land, and launches into step two — tripping into the room, with her head thrown back at a playfully acute angle. 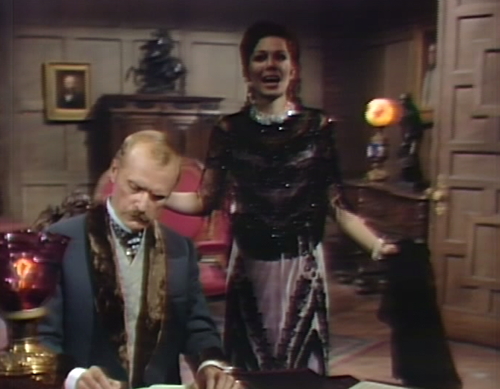 She glides into position, resting a hand on the back of his chair, and finds that there’s a boom mic shadow in the place that she thought she was supposed to stand.

She spends the next thirty seconds at war with this shadow.

Stretching her neck, she weaves her way out of the darkness, and fixes her gaze about six inches above the camera.

“Edward,” she breathes, “the strangest thing happened to me this evening!”

She gets a close-up and makes the most of it, running through a couple of facial expressions that she’s been saving up.

“I was sitting in my room,” she says, “and the window was open. And the night air seemed to be calling to me!” She doesn’t believe any of this malarkey, by the way; this is just the way that Kitty makes conversation.

And then, consarn it, she leans back a little, and there’s that boom mic shadow again. Her line is, “It was as if some great adventure was waiting for me, in the night,” which deserves an unobstructed view of the actress.

So she leans forward a little more, determined to stay in her light. There’s a lot of advanced geometry in Kitty scenes. 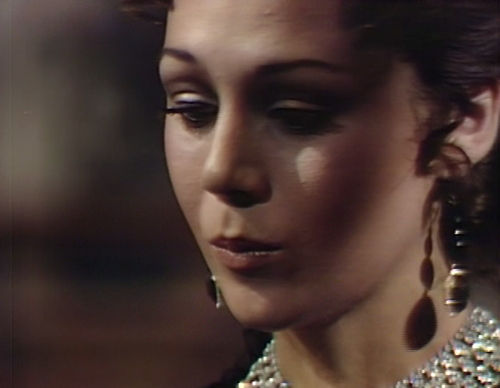 She invites him to come find adventure in the moonlight, but he says he’s expecting a phone call. She presses her lips together again, and — goddamn, boom mic! Could you stay out of a girl’s shot for two seconds? Scooch over. 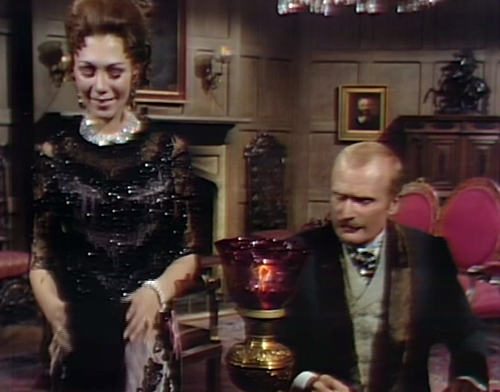 So she makes a break for it, heading out west to the other side of the desk, where a girl can get a little space to breathe. She chuckles that she doesn’t mind about any silly old phone call, and arranges herself decoratively beside him. 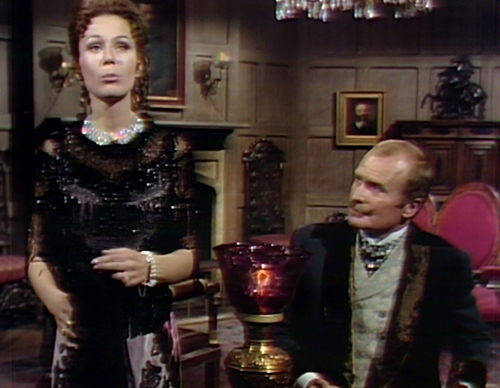 Edward says that it’s actually something in the way of a personal phone call, and he wouldn’t want to burden her with it. Her lips snap together again, and she raises her chin to catch the light.

And that’s really when it’s clear what Kathryn is doing. This is her version of Grayson Hall.

As an actress, Grayson Hall is essentially an architect of the face. She constructs arches, and defines angles. The foundation of her work is the pivot of the chin, always carefully positioned to catch the light correctly. She always knows exactly where her mark is — even if her personal view on that issue comes as a surprise to the director, the other actors, and any intervening furniture. If Grayson Hall is in a scene, then the audience will be aware of it. That is her job.

Now, Kathryn Leigh Scott has been on the show with Grayson Hall for a couple years now.

And she’s had plenty of opportunities to study the technique. 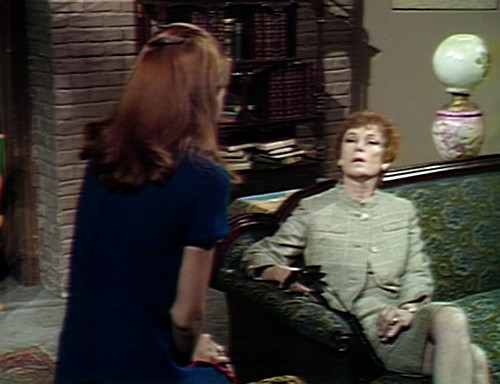 And at a certain point, you just say, to hell with the chiropractic bill, I’m going to go ahead and give it a shot. 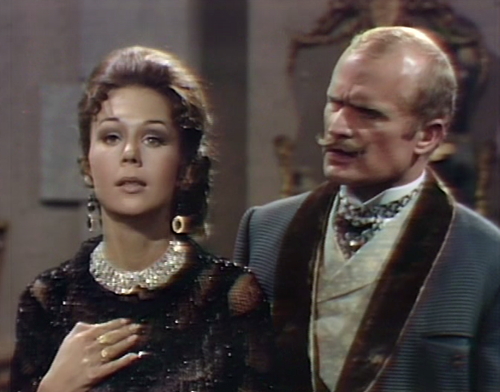 So when you watch a Kitty scene, keep an eye on her chin; it’s amazing. If you’ve got 852 available, check out this moment, when she comes into the foyer and tells Edward that someone was watching her in the woods. There are four distinct moments where you can see her reminding herself to lift up her chin, all in the space of ten seconds. It finishes with a spectacular lift — and then double lift, with a bonus eyebrow arch. It’s really something.

This is what camp is, by the way, if anyone’s been wondering. Obsessing over a ten-second clip of an actress raising her chin, and forcing your friends to obsess over it too. This is what gay men do, when we’re tired of brunch and non-procreative sex.

And then she snaps her tether, and strangles her blonde vixen rival, clenching her teeth and still keeping her chin above sea level at all times. This! If you ever need to explain camp to the people in your life, here’s my recommendation: This.

Now, I could do this all day — or two days, really, cause we haven’t even touched today’s episode yet — but it’s probably more fun to let you discover the many wonders of Kitty’s head placement for yourself.

All I can really say is that there’s a very brief scene in today’s episode when Kitty and Julia are in the same shot together.

At the start of act 1, the camera swings wide, showing Angelique in the foyer, waiting for her cue to enter the drawing room.

During her Josette freakout, Kitty looks at Edward and says, “Joshua! Joshua Collin!” 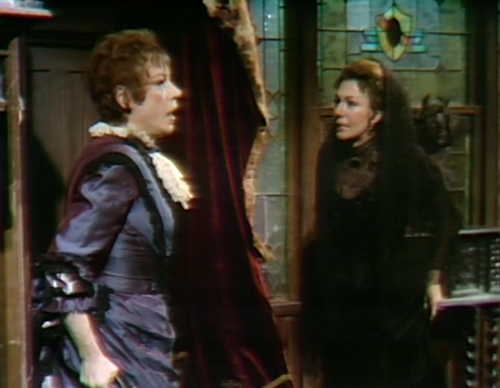