“Had it not been for me, you would have been prowling the woods last night.”

A man died that night. He died on schedule, surrounded by the people who loved him, and hated him, and killed him. 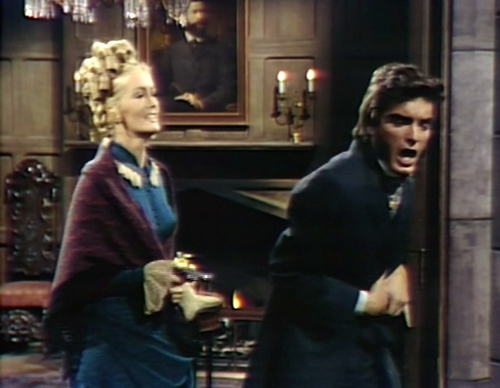 So here we are, ladies and gentlemen: the big dance. We waited for six months to find out how dissolute sinner Quentin Collins finally dissolved, and now that we know, we’ve got twenty-two minutes to undo it.

A mentally cockeyed Cockney mentalist predicted that Quentin would die on September 10th, 1897, and when anybody bothers to get that specific about a prediction, it’s basically guaranteed to come true. You don’t have characters walking around for a week saying “September 10th” in a gloomy voice unless you’ve got something in mind.

That’s especially true in this case, because we already saw how it all happened two days ago. In a flash-forward to 1969, we saw Julia talking to the ghost of Beth, who had a ringside seat to the momentous event, on account of she’s the one who pulled the trigger.

Beth narrated a string of scenes leading up to Quentin’s death, which happened as follows:

So that was Monday, phew! That’s a lot of action for a television show that used to fill up a day with a couple conversations, a glass of sherry, and an assortment of facial expressions. 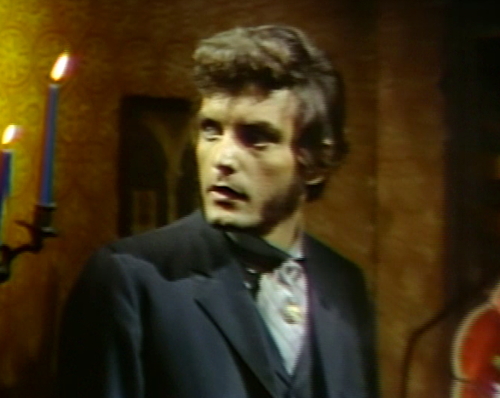 Today, they go ahead and repeat that whole sequence — this time for real, rather than a flashback. It’s six full scenes, taking up almost all of act one and the entire act two, and they’re pretty much exactly the same as the scenes that we saw two days ago.

This is an interesting choice to make, because it relies on the audience’s innate televisual literacy. If we didn’t understand how television works, then this would be staggeringly dull, just watching the scenes play out exactly as we saw them.

Luckily, we know some important things about how this kind of story works, which signal to us that something’s going to intervene. For one thing, this is Quentin, the gorgeous new star of the show, and nobody in the audience wants him to die. That possibility is not on the table, and everyone knows it. Also, we’ve spent six months watching Barnabas struggling to stop this exact event, and if Quentin dies here, then it’s an epic fail that would make us feel like we’d wasted half a year on nothing.

But the most important signal that it’s not going to play out the same way is that they already showed this to us, two episodes ago. We know instinctively that a story that repeats itself every two days will be cancelled. We know that there are producers and writers, who are in charge of making sure that doesn’t happen. And what we’re worried about is that after five and a half scenes, our patience is wearing thin. We know that something has to make this worthwhile, and time is running out.

That’s what makes this suspenseful — not that the character might die and the protagonist will fail, but that our patience might run out, and the story will fail. The audience is never really worried about a character’s welfare. The thing we’re worried about is that we love this never-ending serialized story, and if it gets boring — by repeating itself, or by killing off a great character, or both — then that means we’ll lose interest, and the thing that we love will be gone. We don’t love the character, as if he’s a real person. We love the show. 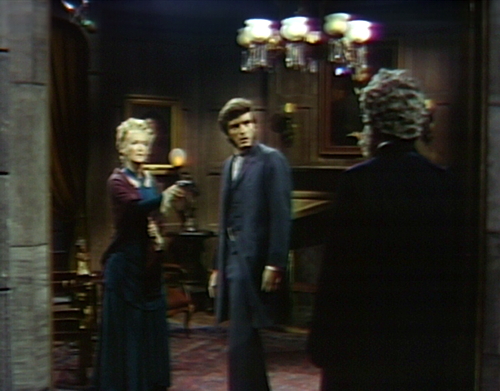 So the actual resolution of the story is unbelievably satisfying, because they do the opposite of what we expected. The obvious way to pull this off is for Barnabas to rush in at the last second. Julia just traveled back into the past yesterday, at great personal risk, in order to give Barnabas the vital piece of information — that this is the crucial minute where he has to intervene. Barnabas has been talking about this moment non-stop for six months.

Except he doesn’t show. As we saw yesterday, Julia is suffering from the traumatic shock of traveling backwards in time. We left her with Barnabas at the rectory, hidden away so that she has the chance to recover and finally deliver the news bulletin he’s been waiting for. That’s why Barnabas isn’t here right now. He knows that this is Quentin’s last night, and he should be hovering around, trying to avert disaster. Instead, he’s stuck at the rectory, hoping that Julia will snap out of whatever she’s snapped into.

So Julia coming back in time didn’t help Barnabas after all. She actually prevented him from being here. And in the resulting heroism vacuum, the villain steps in and saves the day. 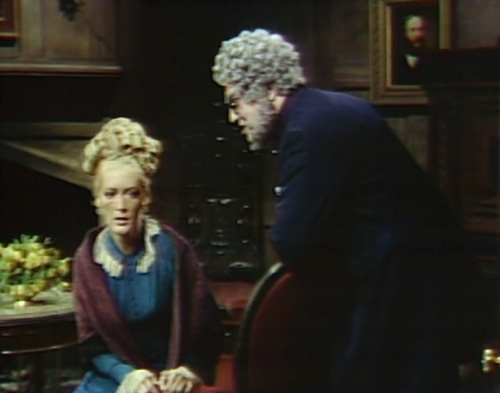 Count Petofi — evil wizard, and the weirdest volunteer in the history of the Big Brothers of America — averts the disaster by walking into the room, and telling Beth to put the gun down before she makes a fool of herself. And Petofi has such an amazing sense of gravitas that she does what he says. She hands over the revolver and sits down on the couch, and then he gives her a little lecture about how she ought to handle hurt feelings in the future.

This is the happy ending that we’ve spent six months building up to, and it happens in the most surprising way available. That is what Dark Shadows is for.

So it turns out this wasn’t the story that we thought it was, after all. We imagined that this was a story about Barnabas Collins, pulling some strings in the family history and making things work out the way that he prefers. But that never happens — not this time, and honestly, not ever. Barnabas screws up everything that he ever tries to do. His plans fall apart, or fizzle out, or explode in a spark-shower that sets fire to the house. Barnabas is the Charlie Brown of vampire protagonists.

Instead, this is a story about the mad god of Ozhden, or however you spell it, and his unsurpassed ability to manipulate the events around him. This is a guy who managed to retrieve his magical severed hand and reattach it to his wrist, while he was lying unconscious in a basement. Count Petofi can do anything. He will outlast us all, probably. 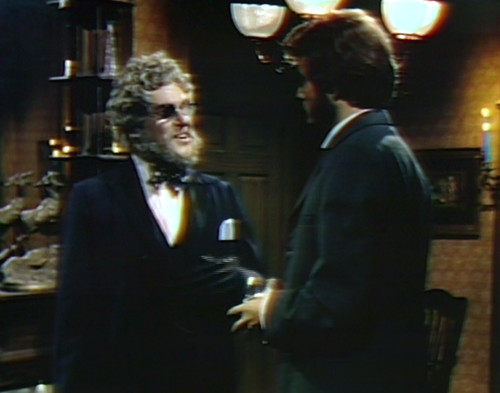 And so we end this amazing day of prophecies unfulfilled with some slap-happy Bond villain dialogue that sets up the next chapter of this never-ending story. It involves yet another Barnabas smackdown.

Petofi:  And now I’ll come directly to my price. I want you to perform a very great service for me.

Quentin:  What do you want from me?

Petofi:  Barnabas Collins is a friend of yours. He will confide in you. I want you to find out from him exactly how he came here from the future, and how he intends to return. He isn’t to know, of course, that you’re doing this for me.

Quentin:  In other words, you want me to become an informer. The answer is no.

Petofi:  You will find, Quentin, that you can refuse me nothing now.

Which is lovely. Petofi’s style of speaking really helps to sell the fairy-tale drama of this storyline. 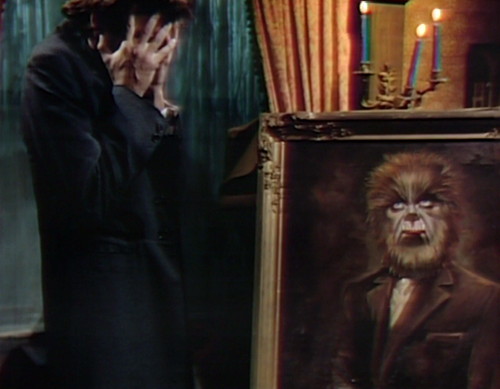 Petofi explains that he hasn’t just saved Quentin from Beth’s bullets; he’s also curse-blocked the werewolf. The other night, during the full moon, Quentin saw the portrait that Charles Delaware Tate painted, topped with a wolf’s head. He hid the cursed portrait in the closet, but now Petofi drags it out into the light again, with the flourish of a master magician. 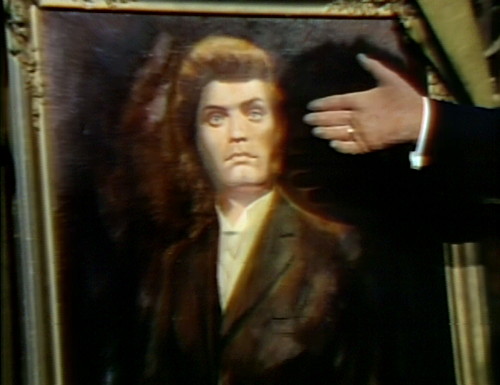 Petofi:  The portrait changed, Quentin, and you did not. What would you give, if you could always look as that portrait looks now?

Quentin:  I think I’d give anything.

Petofi:  So you shall, and so it shall be. You’ll find the betrayal of a friend is a small price to pay for what I can offer you. You’re impressed, I can see it. You’ve decided to join me, and betray Barnabas Collins — and a very wise decision it is, too. Yes, my dear boy. Now, you belong to Petofi. And who knows? Perhaps to the ages.

A man died that night, and a slave to the will of Petofi was born. I guess we’ll find out what that means as we go along.

The camera zooms in on a calendar in Quentin’s room, showing Wednesday, September 10th, 1897. That’s a Wednesday in 1969, but September 10th fell on a Friday in 1897. This isn’t really a blooper, just a funny side effect of all the meanwhiling they’ve been doing lately.

When Petofi walks away from Quentin’s door in act 1, there’s the sound of coughing from the studio. As Jamison walks up to the door, you can very clearly hear a man clearing his throat.

Quentin says, “Would you really, Jamison?” — and then Jamison forgets his next line. He murmurs a bit, and Quentin says, “Yes?” — and finally Jamison chokes out, “Something wrong?”

When Beth is staring at the poison bottle at the beginning of act 2, there’s some movement in the bottom right corner — it looks like someone is holding a script that flips open.

When Count Petofi appears in the drawing room to stop Beth from shooting Quentin, the camera zooms back, and reveals a boom mic at top left. (You can see it in one of the screenshots above.)

Beth bursts into tears at the end of the drawing room scene in act 3, and the sound of her sobs bleeds into the beginning of the next scene.

Thayer David is credited as Prof. Stokes, instead of Count Petofi.

There are a number of scenes in Monday’s episode (as Beth’s memories/predictions) that are repeated here. They were actually restaged for today’s show, although they’re so close that most of the time you can’t really tell, unless you pay attention to the exact sequence of shots. One difference between them is that on Monday, Jamison told Beth that he’d traced all the “figures” in the puzzle, and in today’s episode he says “objects”. Also, the Quentin/Beth gunshot scene begins in today’s episode with the clock striking twelve. 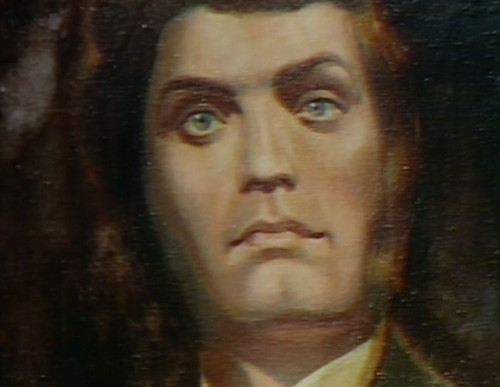