“Why not bring back a strange, powerful hand to solve all our problems?”

It always starts with a box.

But this time, it’s important. At least, that’s what people tell themselves, just before they pop the lock and open the lid. This time, the wolf is at the door, the bad guy is getting away, the emperor refuses to surrender. I have no choice, they say. It’s really important.

Magda Rakosi — itinerant gypsy, occasional housekeeper and full-time lunacy catalyst — has returned from a trip to visit Johnny Romano, King of the Gypsies, who lives in Boston because it turns out New England shares a border with Transylvania somehow.

Magda is doing an independent study on werewolf curses and how to remove them, because she recently turned Quentin into a wolf, but then changed her mind and now she can’t take it back. So she took a semester abroad to track down the legend of the gypsy witch who cursed Count Petofi in the forests of Ozhdon, which I guess must be somewhere in New Hampshire.

But the old gypsy is dead, and her daughter is dead too, probably from an excess of maple sugar and Ivy League schools. So King Johnny gave Magda the next best thing: a mystery box!

“It is not an ordinary box,” Magda says. “Every one of these carvings has a meaning!” Yeah, like “radioactive” and “keep out”.

This is one of those doomsday boxes that you run across every once in a while, and the smart money says you should put it back where you found it. Any second now, that thing’s going to bust open and a million little Greek soldiers are going to come running out, and you don’t want it in your house when that happens. But nobody ever reads the warning labels.

Magda opens the box, and reveals a withered human hand, which has been forcibly separated from a withered human person. The hand wears a giant ruby ring, which is daunting all by itself, because not everybody can pull off a look like that. In short, it’s creepy and it’s kooky, mysterious and spooky, and it can suck curses out of dudes like you wouldn’t believe.

“When the moon is full,” Magda says, explaining the recipe, “just before the curse seizes Quentin and turns him into an animal, we will lay this hand on Quentin’s heart, and it will draw the curse from him! And Quentin will be cured, forever!”

Barnabas sniffs, “As simple as that.”

“The strongest magic is always the simplest,” Magda says, which I guess is true, provided you don’t have a lot of data points for comparison. 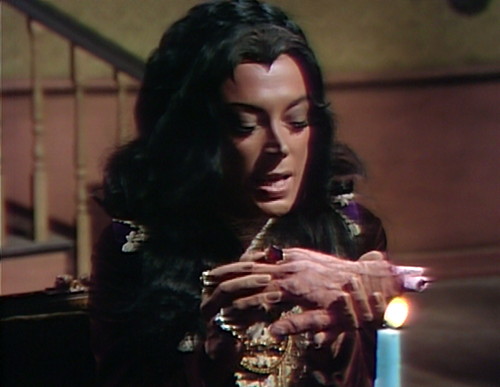 She takes the hand out of the box for a test spin, and we can see that it’s got a nice chunk of wrist bone still attached. We get a little spell-casting music cue as the gypsy spits out some randomly generated backstory. “The blood of the slaughtered nine has been washed away! And you, who were against us, are now with us!”

She throws her head back. “Released by the guardians of the chains, and blessed by the custodians of the twelve days, grant us the use of your powers! Your powers of life, and death! Of night, and darkness!” That was probably supposed to be “light and darkness,” but don’t bother Magda when she’s on a roll.

“When the time comes,” she says addressing the hand directly, “you will know what must be destroyed, and you will destroy it!”

Then she stands up, sighs with relief, looks Barnabas straight in the eye, and says, “There. It is done.” So that’s how you do whatever the hell that was.

And I, for one, am entirely convinced. They are imbuing Halloween decorations with mythological powers, which is basically Dark Shadows’ reason for existing. This is obviously nonsense — as fifty percent of the characters in this scene are pointing out — but it’s high-quality nonsense, which is crucial. 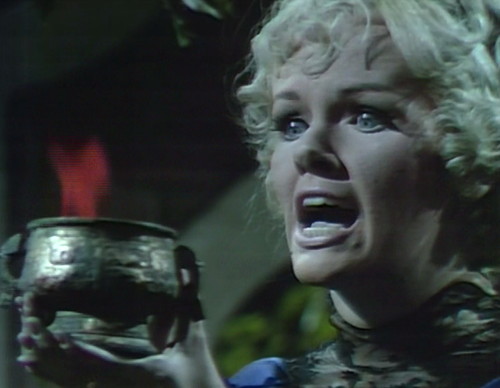 So, to take a recent example of painfully low-quality nonsense: The Things What Kept Laura Alive.

Laura Collins, as you may recall, was some kind of phoenix fire demon creature, resurrected by the Egyptian sun god Ra in order to spawn and then burn up a couple of rich New England children. Being an essentially dead thing, Laura needed a source of warmth to power her unholy existence. That’s a perfectly good metaphor — dead things are cold, alive things are warm, she needs warmth to move on. Excellent.

So early on, Laura started having chilly spells, and she prayed for help. Ra sent her a magical urn filled with an eternal flame, and this would keep her going, as long as it kept burning. Again: good metaphor, let’s go with that.

But almost immediately, Quentin found the urn and poured sand on it, extinguishing the flame and returning Laura to the chill of the grave, except it didn’t. She was shaky for a minute, but then she grabbed on to Dirk and asked Ra to give him the warmth to keep her alive, and so that happened. But then that wasn’t enough, so she and Dirk prayed to Ra for another vessel.

Ra sent them a scarab — a solid chunk of metal in the shape of a beetle — which you wouldn’t think offered much in the way of heat retention. So she put it down somewhere and pretty much forgot about it, and the story just kept rattling on, utterly unmoored to anything resembling a clear metaphor. By the end, she was revived from a cold spell simply by lighting a fire in her bedroom, so she didn’t really need all those artifacts after all.

That’s why the Laura storyline was so painful as it dragged out — they blew their one solid metaphor too quickly, and then struggled to find anything else to hang on to. We can build a make-believe mental model that says “urn is burning, Laura’s warm,” but we can’t extend that to random Egyptian curios. So the show descended into low-quality nonsense, which doesn’t help anybody.

But the hand in the box is a marvelous crackpot metaphor that can keep a coherent story running for the next five months, if it has to.

There was once a magician so powerful that even his disembodied hand retains some of his dark magnetism. Put this hand on Quentin’s chest under the full moon, and it can suck the stain from his soul, evil calling to evil.

It’s dowsing, it’s reiki, it’s baptism, it’s gluten-free cereal, it’s a rosary wrapped around a lucky horseshoe. It’s an invisible chi present in all things that you can’t see or measure, which wants you to rearrange your furniture. It’s whatever dingbat thing that you believe in which doesn’t make logical sense, but it makes metaphorical sense, which is even more powerful.

This hand is something old and something new, something borrowed from the heavens that Magda can’t give back when she’s done with it. It’s high-quality nonsense, and it doesn’t come with a gift receipt.

Carl says, “Foul play, Judith! Pansy met with foul play! And don’t think I have — don’t have ideas about who did it!”

After Barnabas leaves, Judith settles herself on the couch. Carl cries, “My fiancee is dead, and you call my talk about it prattling?” She stares at him, sighs, and looks at the teleprompter.

On her way to the stage in Carl’s dream, Pansy has lost the false eyelashes from her right eye.

I have no idea how to spell the forest of Ozhdon or whatever it is. I suspect that if you asked the writers at the time, they would say that they couldn’t care less.