“I know what the evil force wants you to do next.”

Sophie Baker — white female, mid 30s. Discovered in storage area behind the Blue Whale. Severe wounds to the neck, drained of blood. Dead, but still super drunk somehow. Eyes had a haunted look, as if they had stared into a subterranean chasm that would destroy us all. Officers advised to be on the lookout for a metaphor for the lust and greed that drives the exploitation of the lower classes. 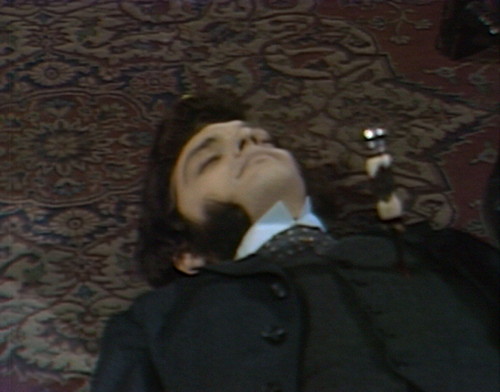 Quentin Collins — white male, late 20s, enthusiastic facial hair. Discovered lying on the floor of the groundskeeper’s cottage, with a knife thrust into his heart with force that suggests heavy dramatic irony. Body was moved to the drawing room of Collinwood before the forensics team could arrive at the scene. Unusual haste only natural, considering how broken up everybody was.

Thorough search of the docks area ensued. All sailors questioned alleged that they were not “transient” per se; it’s just that being a sailor requires you to go out to sea every once in a while, and if that makes somebody transient, then aren’t we all transient in our own way. Search of docks area also turned up several more drunk women with severe throat lacerations. Sailors suggested that the girls were probably killed by some rich white lady with a big mouth.

Jenny Collins — apparently white female, late 20s, false eyelashes. Discovered lying at the base of the grand staircase in the Collinwood foyer by B. Chavez, severely injured after a fall. Deceased was brought into Chavez’s room to recover from her accident. Did not recover to any noticeable extent. Severe bruising around the throat area indicates that she must have hit her neck on something as she went down.

E. Collins confirmed Chavez’s story, and alleged that the rest of the family would agree, because of Collins family honor and pride. Investigators were informed that they had no choice but to accept this story. Expressed sympathies to the family in this trying time, made mental note to send fruit basket.

Swarthy foreign types observed in the area, holding a button ripped from a man’s jacket, and muttering imprecations. Officers did not approach.

Severe tooth and claw marks found on the deceased, possibly the work of a transient sailor. Further investigation halted after complaints of profiling from the transient sailor community.

Angelique DuBois — white female, mid 120s depending on how you count, no fixed abode. Reported burned in sudden magical inferno, left no corpus delicti or evidence of fire.

Witness Q. Collins reported that he saw Angelique burning in this room, right here in this room, further stating that witches burn, and fire is the only way to kill them. Witness added that Laura knew that, and that Laura had won. Witness’ credibility compromised because he had died on March 28th inst, and should probably have been buried by now. What is even up with this family.

Witnesses J. Collins and N. Collins alleged that deceased was gone, in the flames, but it wasn’t her, it was someone very old. Family strongly advised to install smoke detectors.

Victim suffered severe neck wounds, suggestive of a transient you-know-who. Victim also had a piece of frayed rope around her neck, but only in the reprise and why would there even be rope there. Victim was buried secretly in the woods, and we don’t know about it yet.

Minerva Trask — white female, late 40s, frumpy. Discovered lying on the floor of the parlor. Analysis discovered trace amounts of tea in her cup of deadly nightshade. Witnesses E. Hanley and G. Trask reported that the assailant was a Timothy Shaw, a teacher at the school. Then they called back later and said they were only kidding. Sometimes I wonder why we even bother to turn up. Life is too short, especially in this town. 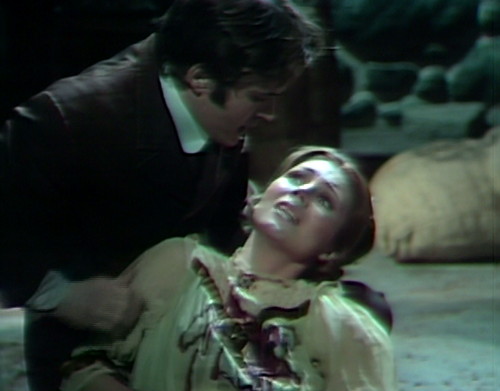 Rachel Drummond — white female, mid 20s, loosely based on Jane Eyre, possibly a reincarnation of Josette Collins but don’t quote me on it. Discovered in the farmhouse basement by bystander T. Shaw, who carried the dying girl to the Old House because the light is better over there.

Victim was shot three times in the breadbasket. Ballistics report indicates that the shooter was under the control of a supernatural creature, but ballistics says that every single time. Ballistics claims that’s because it’s true every single time; there are a lot of supernatural creatures around, and it’s not ballistics’ fault if people keep getting under the control of them. 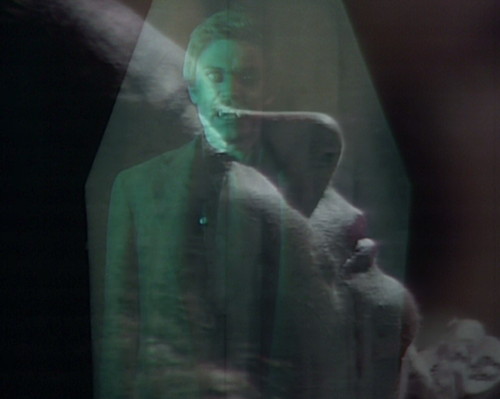 Dirk Wilkins — white male, early 30s, kind of emo looking. Large wooden stake piercing victim’s internal organs. Died of a broken heart. Body discovered by E. Collins, who just happened to be walking by when he saw the deceased fall down the stairs and onto a sharp piece of wood. Officers advised to be on the lookout for a more satisfying career path.

When Judith tells Trask that she remembers coming back to Collinwood, you can hear footsteps from the studio.

After Trask hangs up on the police, there’s a loud squeak.

Carl and Tim have a rough moment with the dialogue:

Carl:  Well, my Pansy, she didn’t disappear just by accident. 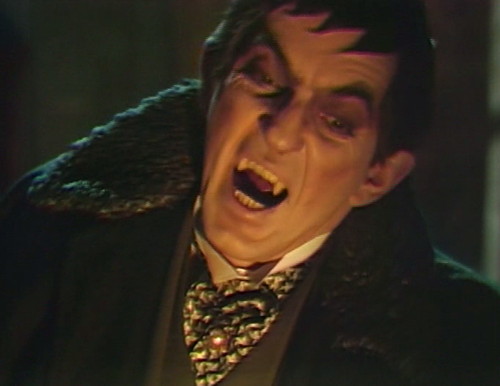