“Well, I’m sorry, I think the idea is absurd, and impossible to grasp.”

Okay, we’re finally here — the big finale for Laura the phoenix, filmed in full color Cinemascope, with a serious uptick in the ol’ suspension of disbelief.

Now, I know this has been a lengthy battle with a lot of extra distractions, but according to the opening narration, the family has really taken their collective eye off the ball.

A violent conflict rages within the great house of Collinwood, between two supernatural forces — one determined to snuff out the lives of two young children, the other equally determined to save them.

Only Barnabas Collins is aware that the safety of Jamison and Nora is vital to the whole future of the Collins family.

So — wait, really? Barnabas is the only one who’s aware of that? Cause those are the only two kids in the house, and looking at the adults, I don’t see a lot of reproductive potential. If they really don’t understand that you need kids to have a future, then somebody needs to have a long talk with the Collins family, while we still have one. 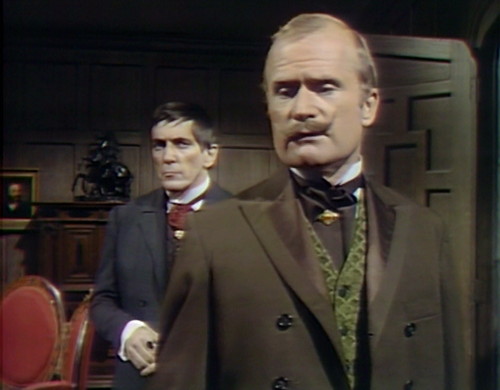 But even in our darkest hours, we can always count on the Louis Edmonds character to make everything better. Edward tells Barnabas that the children are hidden somewhere in the mansion, and Laura won’t be able to find them.

Barnabas:  Well, she won’t go about it in any ordinary way. She has unusual powers at her command.

Edward:  I can accept the fact that she’s a disturbed and dangerous woman, I’ve known this all along. But you would have me believe that she possesses — what did you call it?

Edward:  Well, I’m sorry, I think the idea is absurd and impossible to grasp. I simply don’t understand it.

And then he walks around the room and bristles his mustache. You have to love Edward. He doesn’t recognize the phrase “supernatural powers,” even though pretty much everybody in his social circle has some.

But Barnabas warns him to be prepared: “Her powers are weakening, because her energy has been taken away from her. But she’s desperate; she has very little time.” It’s not clear how Barnabas knows any of this, but all of a sudden everybody’s an expert in Laura Science.

“There must be no fire or flame in the house this evening,” Barnabas declares. “All fireplaces, oil lamps, candles and stoves must be extinguished. You may use whatever electricity that you have.” Again: no idea where these best practices come from. Next he’s going to tell Edward to make sure his small electronics are in airplane mode.

Then Laura walks in and falls to the floor, so maybe there’s something to this “energy has been taken from her” jive after all. Barnabas tells Edward, “Don’t call the doctor. By the time the doctor gets here, she will be dead.” Okay, cool. Are we done? 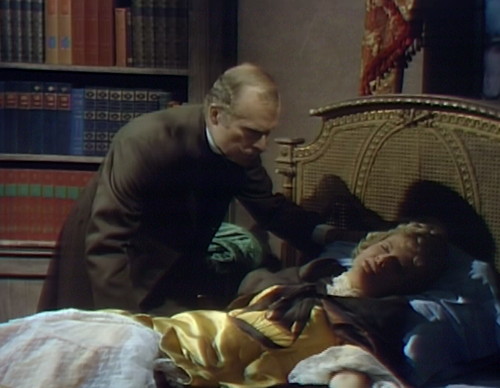 But no, then we have to carry her upstairs, and we’ve got like twelve minutes left. Edward tucks her in and says, “I think you should be still and quiet,” so amen to that.

You know, it’s funny, this feels like a real throwback post for me, where I’m not doing anything but posting quotes and sniping at the characters. This is what the Laura storylie has done to me. I don’t think I’ve been this cranky since Vicki left. 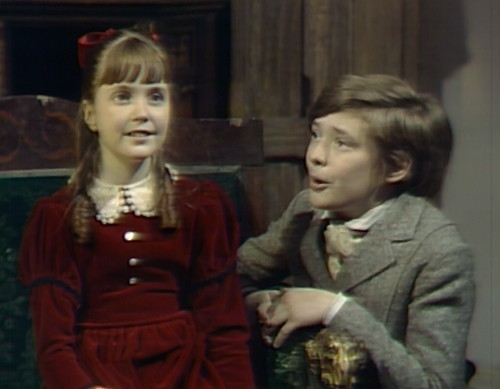 I think the problem is that the core of the story is just incoherent. It started out with “Laura wants to burn up the kids so they can join her in a spooky fire world forever,” and it hasn’t advanced beyond that one single step. It doesn’t make sense, and there’s nowhere to go with it.

It’s just an A/B choice — Laura burns the kids, or she doesn’t — and they’re kids, so the smart money is on “doesn’t”. So what are we waiting around for?

They’ve had six weeks to elaborate on this story, and we still don’t understand what Laura actually needs to do in order to succeed. It seems like she just needs to appear in the fire and say, “Children, come join me,” except she’s already done that several times with each kid, and nothing happened.

We don’t know what she needs. We don’t know what she’s waiting for. She’s already lost two vessels containing her fire energy — an urn and a scarab — and that’s supposedly why her energy is failing, but then Edward lights a fire for her like a chump, and all of a sudden she’s good as new, and ready to appear in the fire and say, “Children, come join me.”

And the kids don’t really make any sense, either; they’ve been flip-flopping like mad on the “going away with Mom” issue. A few episodes ago, Barnabas hypnotized Nora to be frightened of her mother, but that only lasted for a day. Now all of a sudden Jamison is a travel agent, selling Nora on the wonderful place they’re all going to go, where the sun is always shining, and so on.

Also, someone’s been telling Denise Nickerson that she needs to be super expressive all the time, which is not the case. She’s never just happy or scared these days, she’s exploding with manic glee or en route to the electric chair. We need her to dial it back before she pulls something. Sorry, I told you this story was making me cranky. 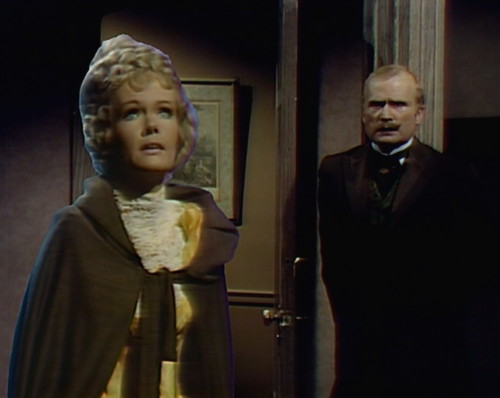 But, like I said, the Louis Edmonds character will always come through for you. Here, Edward is finding out first-hand that the supernatural exists, and he used to be married to it. And he’s just baffled and horrified, and his concept of the way that the world works is crumpled up in a ball and thrown away. He watches his wife turn into Chromakey, and fade into the afterworld. This is not the kind of thing you get over in a hurry. This will have consequences. 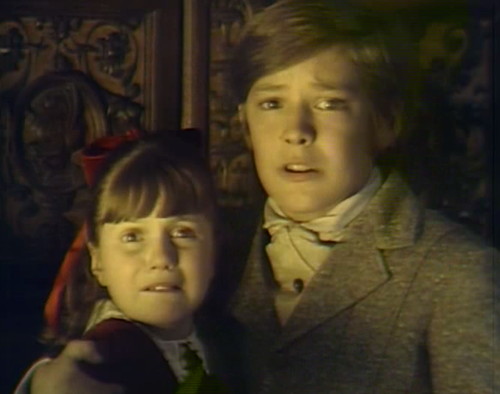 So we just have to hang on. Like Nora and Jamison — aka the whole future of the Collins family — there’s not really anything we can do, except huddle together and back away from the flames. As long as we don’t do something stupid like enjoy a scene with Laura, I think we can let the professionals take care of it.

And they do, somehow. Probably. Barnabas hits something with his cane, I think, and Angelique casts a spell, and Magda mixes a potion, and Quentin kisses somebody. Or maybe they just dump some water on the fire and put it out, like a normal person would do. Am I the only one who’s thought of that?

Barnabas tells Edward, “Her powers are weakening, because her — well, her energy has been taken away from her. But she’s — she is well aware that… she’s desperate. She has very little time.”

Laura tells Edward not to interfere, or they will both go up in flames. “My God,” Edward says, and then walks around Laura to pose on the other side. He glances at the studio several times before continuing, “I should have listened to Barnabas.” During this time, Laura must have been taking off to another set, to prepare for the Chromakey effect at the end of the scene. It seems like Edward is pausing more than he should, to make sure that everyone’s giving the right cues.

Barnabas asks Edward, “Where do they have them — where do you have them hidden?”

Jamison and Nora are trapped behind the flames. Nora says, “We’ve got to get out of here!” and Jamison responds, “We can’t! There’s no way out!” There’s a pause, and then Jamison cries, “Where, mother? Where?”

When Laura ages at the episode’s climax, it looks like she’s using the same old-lady wig and mask that Angelique used, back in May 1968.

Also: Ralston-Purina lamp, showing up for work. It gets two nice close-ups today, because it is the secret star of the show. 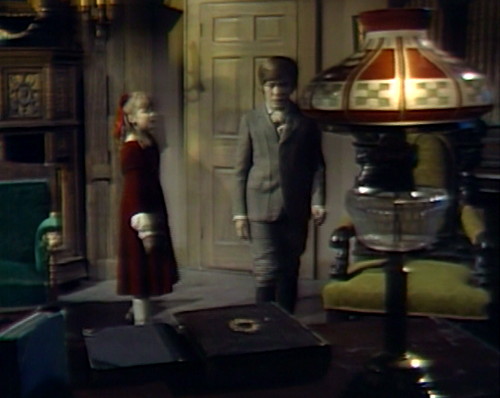