“On this night, with the rising of the full moon, a young woman finds out the terrible thing he is destined to be.”

Incipient lycanthrope Quentin Collins was supposed to be standing inside the pentagram drawn on the floor when the change took hold, but guess what? He had other ideas. Now Beth is in a room that has a werewolf in it, which is not a comfortable position to be in.

And so we get one of the most stunning cliffhanger resolutions they’ve ever done, as Beth jumps inside the pentagram, and the werewolf does a little mime act around the perimeter, trying to get at her. 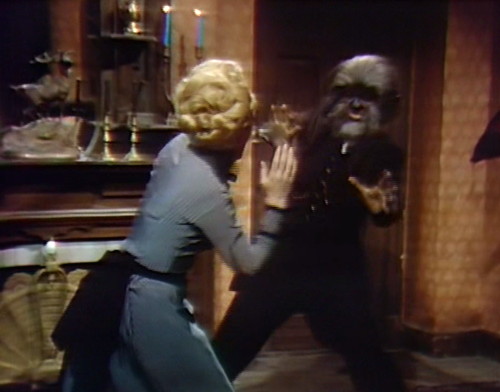 I swear, I will never get over how great the werewolf is on Dark Shadows; he is just a constant source of thrills and delight. He’s all dressed up in a suit, snarling and snapping, and he’s absolutely dumbfounded why he can’t penetrate the occult symbol and tear this crazy broad to pieces. If you look closely, you can see the little question marks appearing above his head.

He does a complete circuit around the pentagram, and then he just says the hell with it, there must be more to life than this. And then the savage beast goes to the door, turns the doorknob, and makes tracks.

You don’t see werewolves using the doorknob on any other television shows; that is a Dark Shadows original. The next time anybody did a scene like this, it was the velociraptors figuring out how to open doors in Jurassic Park, and that made 357 million dollars domestic, so maybe it was a good idea after all. If there are any further questions, you can take it up with Mr. Spielberg.

And then there’s twelve straight minutes of werewolf-free material, which is a bit deflating. We go over to Worthington Hall’s new campus, where young Jamison is spending another day locked in the punishment closet. This was a mean thing to do back before the original school burned down, but now they’ve moved into a new building that’s actually on the grounds of Collinwood, the great estate that Jamison will eventually inherit. It’s like being released from prison, only to be taken to your own backyard and locked up in a cell for another few years. Also, they don’t give you any food, and the chances of storyline development are fairly remote. It’s a grim situation for everybody.

So then we go through this whole thing where Tim feels bad for Jamison and tries to smuggle him some food. Charity’s been left in charge of the school while Reverend and Mrs. Trask are out for the evening, and she and Tim have several conversations about why they can’t let the kid out of the closet.

Tim promises Charity that he won’t give food to Jamison, but then he does, and she catches him, and Tim tries to explain that children need to eat food or else they die, and then they have a lengthy discussion about whether it’s okay to not tell Charity’s father about this, and HELLO, THERE IS A WEREWOLF OUTSIDE.

Honestly, all this time that we’re spending listening to Tim and Charity discussing management strategy, when we could be out playing with the werewolf. My appetite for Worthington Hall office politics is ebbing considerably. 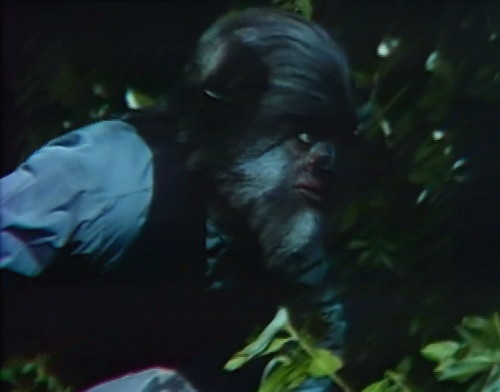 Twelve minutes later, Jamison finally climbs out the window and runs off into the night, where he can be menaced by things. The “Jamison is out in the woods with a werewolf” sequence only lasts forty-five seconds and doesn’t really amount to anything, but it’s a step in the right direction, and I appreciate it.

As Jamison walks through the woods, he hears something moving around in the underbrush, and hurries away. The werewolf isn’t very far behind the boy, but even the remorseless savage killing machine can tell that there’s no point in pouncing on someone when we’re only halfway through act 2. So the werewolf just jumps up on a boulder and crouches there and looks awesome.

Then there’s a lot of back and forth with Beth caught in the middle between Jamison, Tim and Charity, and the real drama in the episode is about how Beth can stand there calmly and talk about kids running away from school when her boyfriend is outside probably tearing through the junior faculty with his teeth.

So this is how you can tell that Dark Shadows is a soap opera rather than a monster movie, because they’re spending more time on the information management problem than the physical safety problem. Soap operas are approximately ninety percent information management activities — keeping secrets, gossiping, eavesdropping and Freudian-slipping — so the actual werewolf lurking in the bushes is not as dangerous as the question of who knows about the werewolf. 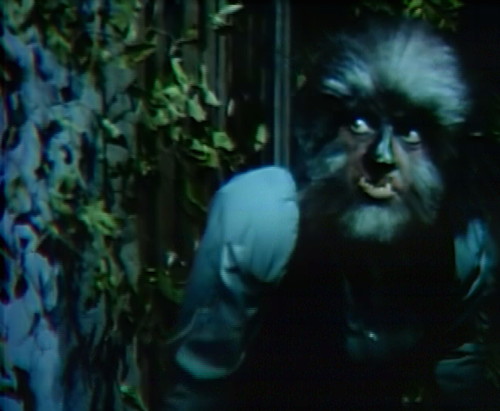 And this is going to be a tough secret to keep quiet, because it’s only been a couple of episodes and already there’s a long list of people who know about Quentin and the gypsy curse. There’s the gypsies, of course, and Beth, but yesterday Evan figured it out, and it wasn’t that long ago that Quentin was babbling to Edward about Magda’s curse.

Thankfully, Edward doesn’t really listen when other people talk, but Quentin needs to start thinking more carefully about his marketing strategy. There are a lot of loudmouths and loose cannons in this storyline, and all this gypsy curse talk is bad for the brand. Plus, there’s a pentagram drawn on his bedroom floor, which is going to be hard to explain.

Luckily, there isn’t much of a police presence in 1897 Collinsport; Dark Shadows has apparently evolved beyond the need for law enforcement. There are two major news stories that the police have missed in this storyline so far. #1 is that Jenny killed Quentin, and #2 is that Quentin kiled Jenny. The fact that both of these events have slipped past the authorities is kind of remarkable, even for this show.

Back when Quentin died last month, Judith gave the police a dubious cover story about a sailor that Quentin met at the docks, and the police officers said thank you and went off to investigate. Now that I think about it, I’m not sure that anybody bothered to update them when Quentin came back to life. For all we know, they’re still down at the waterfront, looking for that imaginary sailor. The poor things, they’ve probably been worrying themselves sick over nothing, while the actual felonies just pile up. Well, never mind. What were we talking about again?

When werewolf Quentin runs out of his room, you can see a stagehand behind the door.

When Jamison stumbles through the woods, you can see the edge of the green carpet.

There’s a moment between Beth running out of the foyer and Jamison coming to the door of Collinwood, where all we see is black and nothing is happening. 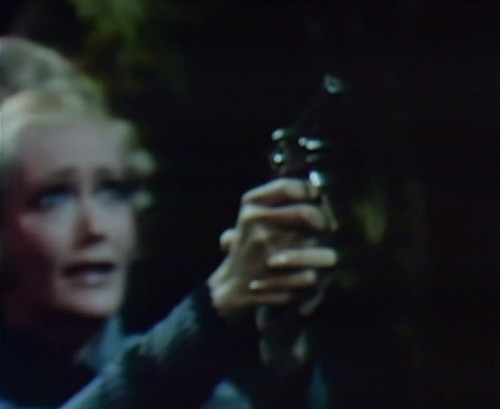