“And Barnabas will grab her, and carry her off to a triumphant life behind a locked door!”

Rascal-in-chief Quentin Collins has spent the better part of a week hunting for his lunatic soon-to-be ex-wife Jenny, vowing to kill her before she kills him. But it hasn’t happened yet, and he’s starting to get bored, so he settles in for a quiet evening of drinking sherry, propositioning the domestics, and not giving a shit. 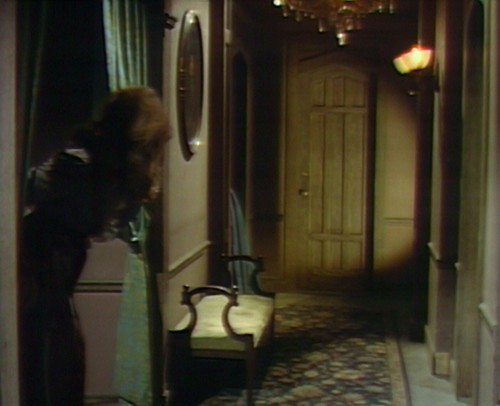 I mean, at a certain point, you need to decide where you’re going to store your lunatic. Moving her around from place to place is tedious, and unsettling for the lunatic.

Barnabas and Judith are currently searching the mansion, calling Jenny’s name. You’d expect that Quentin would be searching too, but he hasn’t even heard about it. This is one of those times where you have to remind yourself that Collinwood is an enormous mansion, because today all we see is the drawing room and that hallway.

Quentin’s helping himself to the first in a series of sherry shots when his maid/girlfriend Beth enters the room.

Quentin:  Hey, now, don’t look at me so serious.

Quentin:  I don’t want to hear it. I’ve had enough seriousness for one night. Now, let’s drink some good wine, play some soft music, and forget, hmm?

Beth:  Quentin — Jenny’s in this house!

Quentin:  Well! So Judith succeeded where I failed. Chalk one up for her, she scores again! Have you all put her in some new place? You must be running out of hiding places for my wife.

This is what he does today, stand around and make sarcastic remarks about the storyline. He’s basically doing one of my blog posts for me, live on the scene. 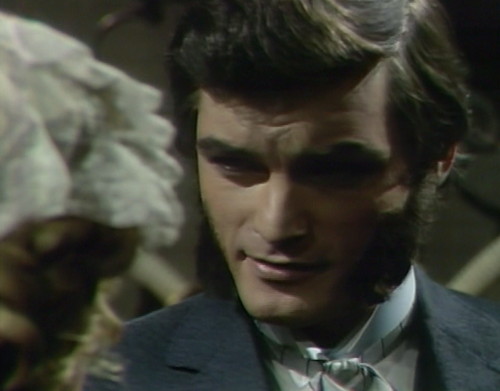 This is an amazing trick that’s become Quentin’s specialty — the ability to shift gears mid-story, if it makes the show better.

Beth:  Judith didn’t bring her back. She escaped.

Beth:  Quentin, be serious. You have to be! She’s after you!

Quentin:  Two minds with but a single thought, Jenny and me. When I’m not after her, she’s after me. Now, why don’t you all simply let us meet?

Beth:  Because we know what would happen.

Quentin:  Yes, you do. You should have let me kill her.

He raises an eyebrow, and punctuates the line by pointing at her with the glass of sherry in his hand. This is flirting for him; “you should have let me kill her” is a Quentin Collins pickup line. 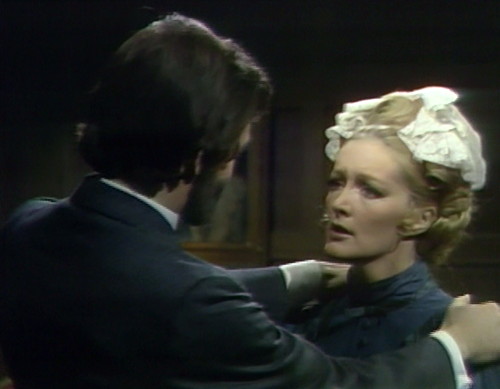 But she insists that he needs to leave the house, and he follows her around the room, giving cute speeches.

Quentin:  You know, you aren’t ideal for me. You’re too practical. You don’t seem to realize that I demand a woman who has no other interests but mine. Having come from a divided family, I want complete attention.

Beth:  What is wrong with you? She’s insane, Quentin! She’ll try to kill you.

Quentin:  All right! Then give me the pistol I gave you tonight!

Quentin:  All right, I’ll get another one.

And then he heads for the door, on his way to the family arsenal.

But she grabs his arm, pleading with him to be sensible. “If you won’t do it for your own sake, please do it for me. Let me handle this. Please?” 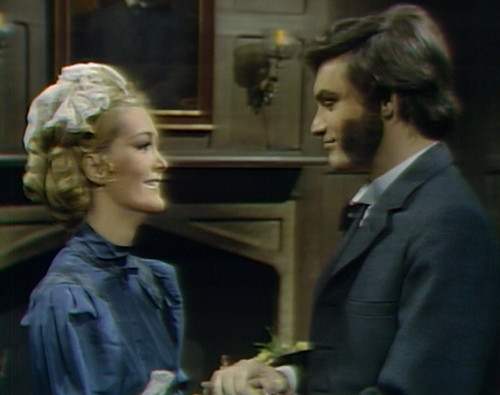 And then he does this lovely little turn. We get a close-up, while he cycles through frustrated, willful and confused. Then he takes half a second to think, looks at her, and smiles.

He takes her hand. “All right,” he says. “Is there any particular place you want me to go?”

It’s fantastic, just a perfect moment. This is key to maintaining the audience’s affection for Quentin. If you want your new main character to walk around with a murder weapon in each pocket, then you have to give him a moment to relax once in a while, to be sensible, to connect him to someone who cares about him.

There’s three steps to getting your audience to like a character: make a joke, make a friend, and make a plot point happen. Quentin is doing all three right now; it’s an irresistible combination.

And the “plot point” step explains why we don’t really care that he’s trying to murder the mentally unstable. Quentin with a murder weapon is exciting; it’s a promise of imminent story advancement. He’s actually still got the garrote that he had yesterday in his pocket; he’ll take it out and play with it in a few minutes. He can do all of these things simultaneously.

Since they introduced Quentin a couple months ago, I’ve been tracking how he manages to rise up so quickly to the top tier of characters, joining Barnabas, Julia and Angelique. But he’s actually becoming a richer and deeper character than the other three. All of a sudden, they have to hurry and catch up to him. 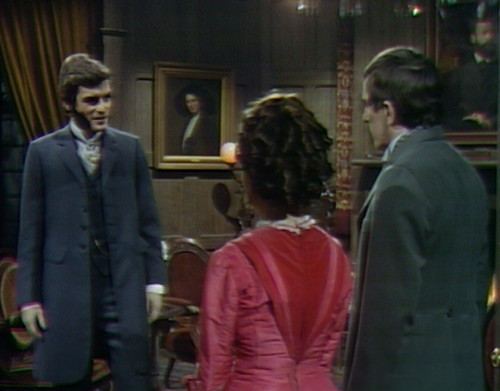 Then Barnabas and Judith come in, a pair of wet blankets trying to spoil everybody’s fun. Quentin was having a sincere moment with Beth, but seeing one of his elder siblings always engages his sarcasm subroutine.

Quentin:  I was just leaving. But I’m glad I have the opportunity of congratulating you, Judith — and you too, cousin Barnabas!

Barnabas:  On what, may I ask?

Quentin:  Well, for the way both of you handled this situation — Mad Jenny is free again. You know, if I were ever a prisoner, I’d want you both as jailers. Good evening, all.

Oh, it’s lovely. He can murder anyone he likes. 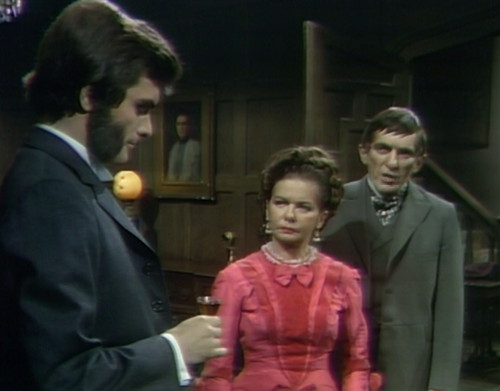 But Barnabas and Judith have a stupid plan — this is Dark Shadows, somebody always has a stupid plan — which they patiently explain, as Quentin pours himself another glass of sherry.

Barnabas:  If she knows where you are, she will come to you.

Quentin:  With a knife in each hand! No thank you.

Barnabas:  Quentin, please, at least listen to our plan.

Quentin:  (smirks) You mean where I’m going to stand.

Then he struts around the room, declaiming. “Now, let’s see,” he says. “Did you choose the middle of the foyer? Am I to be talking loudly — shouting, perhaps! Begging Jenny to come back to me, while you lurk behind some door.”

He whirls around to face Barnabas. “Cousin — you’re making this into a comedy.” 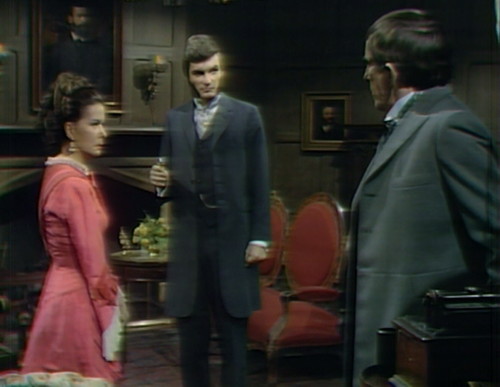 And he’s right; they’re playing this as a comedy, and it’s exactly the right tone. Barnabas is pretending to be an expert in the art of securing madwomen, which is incredibly silly, and Quentin is actively lampshading — pointing out a flaw in the story, in order to hang a lampshade on it and signal to the audience that it’s okay to forget about it.

Barnabas:  Now, you and I will be in the drawing room.

Barnabas:  You will be playing your gramophone.

Judith:  She will hear the music, and come here.

Quentin:  Well, then you don’t need me, do you, sister? Poor Jenny will be trapped by her memories!

Judith:  No! The doors will be open. She will see you, and come in.

Quentin:  And Barnabas will grab her, and carry her off to a triumphant life behind a locked door!

He’s right, of course; this scenario is pure Wile E. Coyote. Everybody keeps barking at Quentin to be serious, and this is what they come up with.

This is what Dark Shadows is — a cocktail of soap opera, melodrama, wit and Warner Brothers cartoon. We know that Quentin is making fun of everybody because he’s scared; deep down, he really is taking this seriously. But he also recognizes the absurdity, just like we do. He’s on our side.

Barnabas gives Quentin a grave look, and says, “I’ll be hiding behind the draperies.” And we laugh, and we sigh, and we don’t touch that dial.

Barnabas tells Quentin the plan: “You will be playing your gramophone. It seems that one of the melodies — which you play, is — is very much to her liking.”

After half an hour of playing the record, Jenny never actually gets to the drawing room. When they turn off the music, Judith and Beth rush downstairs, and they don’t see Jenny on the way. Where has she been? The only explanation I can think of is that she has a faulty Portal gun. 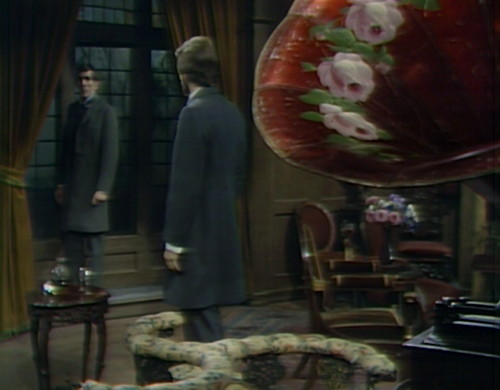