I’ve got a special guest star writing today’s post: Joe Lidster, co-producer of the Big Finish Dark Shadows audio dramas, co-writer of Dark Shadows: Bloodlust, and writer for Torchwood and The Sarah Jane Adventures. I told him that I would write a post about some of the recent DS audios if he would write one of this week’s episodes, and somehow that worked.

My name is Joseph Lidster. I have been summoned by Danny Horn to write something about Episode 742. And on this night of horror and intrigue, I will discover that I’m not as clever, as concise or as witty as Danny but that I bloody love Dark Shadows.

The thing I hate most in soap operas is when someone tells someone the truth. It’s boring. If Bob asks Sue how she is and she says “fine”, then “fine” should be the one thing that Sue isn’t.

Of course, this often leads to those unintentionally funny scenes of two characters smiling and hugging before one of their smiles twists into an anguished frown for the benefit of the audience (this is a regular occurrence in British soap operas — it’s the modern-day backacting). But even with those truth-hugs, it’s simply far more interesting. Does the audience know that Sue isn’t fine? And if Sue isn’t fine then why is she telling Bob she is? It’s mystery, it’s intrigue, it’s story.

Not that boring telling-the-truth scenes is a problem in Dark Shadows. Because, especially at this point in the series, nobody is telling the truth and the truth-hugs are there to reveal big pointy teeth. And, crikey, if only that happened more often in soaps. I love EastEnders to bits but if just one truth-hug could end with the reveal of vampire teeth rather than an anguished frown that would be amazing.

When I asked a friend (Stuart Manning, the previous producer of the Dark Shadows audio range) to show me some of the series, he showed me the first episode and, to be honest, I struggled with it. I later asked him to show me another episode — “something in colour, something a bit more… fun” — and he showed me the first episode of the 1897 storyline. (I’ve since gone back and watched those early episodes and, obviously, I adore them!) Danny’s already explained in previous blog posts just why 1897 works. And I think this episode is a perfect example of why I love Dark Shadows. It’s naughty. 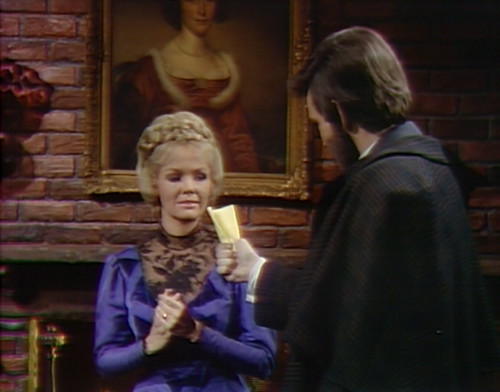 This is an episode where the parents have gone out for the night, and the kids are just doing what they want. Everyone in this episode is either lying, being controlled, controlling another, kissing, making nefarious plans, praying to Egyptian Sun Gods or just generally being sassy.

There’s so much smirking! The opening scene has Laura smirking as Quentin tells her he knows she’s dead. And she doesn’t deny it; she just mocks him. Then Quentin’s smirking when boring old Dirk comes in to save Laura. He doesn’t attack him or anything; he just mocks him. Beth smirks when she catches Barnabas stealing from Quentin’s room.

And perhaps the darkest smirking is when Barnabas is listening to Charity saying that she knows why he’s summoned her but that she really wants to go to her father and could he please just let her go and, rather than just immediately biting her, he sadistically stands there listening to her pleas, and smirks. You really can tell Mum and Dad aren’t around; the kids are playing with their food.

I still struggle to comprehend how Dark Shadows didn’t get complaints. Here in the UK, we had Mary Whitehouse, who famously campaigned against anything (especially in Doctor Who) that went against Christian family values. I’m guessing that there wasn’t a similar lovely lady over in the US? Just look at what everyone’s up to in this episode!

Laura has come back from the dead to burn her children. Laura accuses Quentin of only wanting to protect his nephew so he can get his hands on the family fortune, and he doesn’t deny it, and he’s having an affair with one of the maids. Beth — well, she has some morals, pointing out that Jenny is still Quentin’s wife and that he should respect that — before kissing him again.

And Barnabas. Barnabas, our hero. Our hero who’s gone back in time to save his family. And who in this episode turns into a bat, steals a book, prays to a non-Christian God and, as mentioned above, toys with a young girl before biting her. This is our hero?!

I love Dark Shadows. I love the bonkers opening scene of this episode where Quentin is triumphant because he has a telegram proving that Laura died, and Laura’s just standing there calmly and correctly pointing out that she’s there. “The proof is me! A living, breathing human being!” I love how Quentin reacts to Dirk’s arrival with a witty comeback before strutting out in his cape.

I love what a fantastic actress Nancy Barrett is. Charity isn’t just Carolyn in an old-fashioned dress. The way Nancy holds herself, the way her face moves, the tone of her voice — she’s an entirely different human being! It’s fantastic!

I love how Quentin wants people to realise he and Beth are having an affair. I adore Beth’s smirk when she catches Barnabas stealing Quentin’s Egyptian Book of the Dead, and then her delight in telling him she’ll be most happy to tell Quentin he was there.

And I love the ending! Barnabas summons up a spirit of Laura, Charity runs out screaming (clearly purely because Nancy isn’t in the next episode), Quentin runs in and says, “Oh no, oh my God,” then the spirit of Laura screams and disappears, and Barnabas looks directly at the camera and waits for the closing credits. I’ve no idea what’s going on but it’s just brilliant. Danny might not be a fan of Laura or Beth, but both of them are glorious in this episode.

And you know what? Maybe it’s because of the fact that everyone’s misbehaving beautifully, but Jonathan Frid is astonishing. He doesn’t flub a single line. There are two bloopers involving him which he deals with effortlessly. And he’s smirking along with everyone else — gloriously stealing books, summoning spirits and biting innocent young Christian girls. If you ever meet someone who wants to know why he was so popular then show them this episode. He’s not brooding, he’s not moaning about how sad his life is, he’s not chatting to people over a glass of sherry — he’s brilliant, clever, joyful and a real bastard. 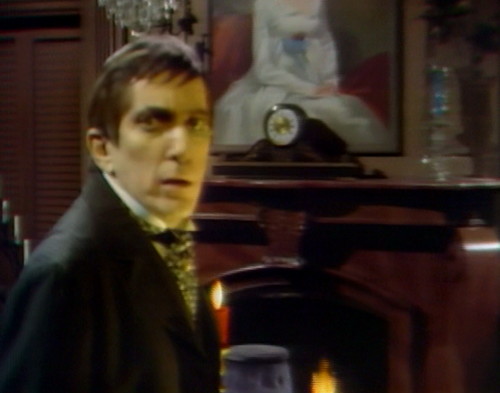 And this is why 1897 works. There are no responsible adults. Everyone’s a bit of a bastard. And everyone’s having fun. It’s addictive. It’s joyful. It’s bonkers.

Tomorrow: Stand Next to Barnabas.

In their first scene, Quentin says, “I really have — I really can’t believe you’ve come back for the children,” after Laura asks him if he’s been able to make up his mind yet. There’s also some occasional discoloration to the picture.

The camera has trouble focusing on Charity when she talks to Dirk at the bottom of the stairs.

When Barnabas is snuffing out the candles, one of them stays lit so he has to try again — which Jonathan does without flinching. You’d think they’d stop having “snuffing candles out” scenes.

After Laura disappears, Dirk calls her name one too many times — with his final “Laura” being played over the next scene. Jonathan Frid is about to speak, hears “Laura”, pauses and then just starts again. Like I said earlier, Jonathan Frid is on good form this episode!

Tomorrow: Stand Next to Barnabas. 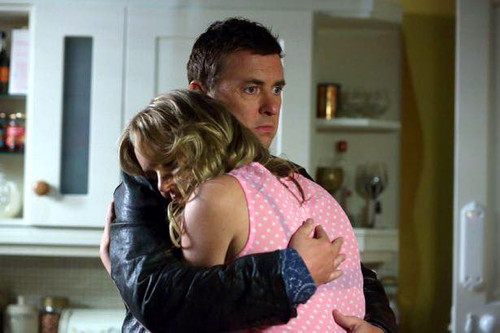