“What if he found out what I believe to be the truth?”

Barnabas and Sandor are on the trail of Laura Collins, a renewable resource who has spent the last several centuries marrying into the Collins family, having a kid or two, bursting into flames, and then coming back a hundred years later and doing it all over again. It seems like a fairly pointless lifestyle, but maybe there’s a tax break or something.

In the last episode, Barnabas and Sandor broke into the crypt of Laura Stockbridge Collins, a previous incarnation, and discovered that her coffin was empty. This was kind of a wet slap of a Friday cliffhanger, because it tells us nothing and goes nowhere.

Now Barnabas and Sandor are standing around, trying to figure out why there’s no body in the casket. It doesn’t seem to occur to them that there’s nothing there because she died in a fire. You know, I think it’s time they try branching out from grave-robbing as an investigation tool. Honestly, every time with these people.

Sandor objects that the Laura Collins that they know can’t be a ghost. “I have seen ghosts!” the gypsy says. “They don’t breathe! They don’t eat! They don’t live on this earth, like people do!”

“But the portrait!” Barnabas cries. “It showed us there was a duplicate of this woman living when I was a boy. Pure coincidence, Sandor?”

Sandor mutters, “I don’t know,” and starts putting out candles. For all I know, this might be the only television show where you can win an argument by saying, “But the portrait!”

Checking the files in this musty old mausoleum, Barnabas finds the record of Laura’s death. “Cause of death: Fire!” he says. “Fire… How could I have forgotten that?”

That’s a good question, because he already said she died in a fire a couple episodes ago. But they’ve let Barnabas off the chain today, sticking him in a crypt with moody lighting, which always gets him extra motivated. He starts laying on the Fridspeak.

“Or did my father change the course of history again?” he wonders, moving around the set and conspicuously not finding his light. “Was there something about her? — about her death, which made him conceal the cause?”

“How can I discover the truth?” Barnabas wonders. Then he brightens: “Quentin! Quentin can tell me!” Sandor asks what he’s talking about, and Barnabas says, “What happened when they went away together, wherever it was.”

Barnabas says, “Egypt?” Sandor nods, and Barnabas cries, “You know that!” I swear, sometimes when Barnabas talks, you can almost tell what the original script must have been like.

“What if he found out what I believe to be the truth?” he muses. “What if he left her there?”

“No,” Barnabas admits, “but he may say something he didn’t intend to. That is my only hope.”

That’s not much of a plan, but if anybody can make it work, Barnabas can. People saying things they don’t intend to is pretty much his specialty.

So Barnabas heads for Collinwood, where he catches up with Quentin.

“Well!” Quentin says, as he struts toward his guest. “The elusive cousin Barnabas!” And then things go kind of super amazingly impossibly gay. Seriously, check this out.

“Nor I yours,” Barnabas counters. 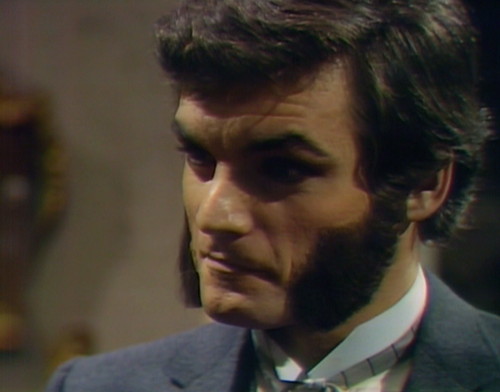 Quentin grins. “But I am home sometimes. You never are! I was just at the Old House. You’re always out — night and day.”

Yeah, I do too. I’d envy anybody at the receiving end of a roguish Quentin smirk. 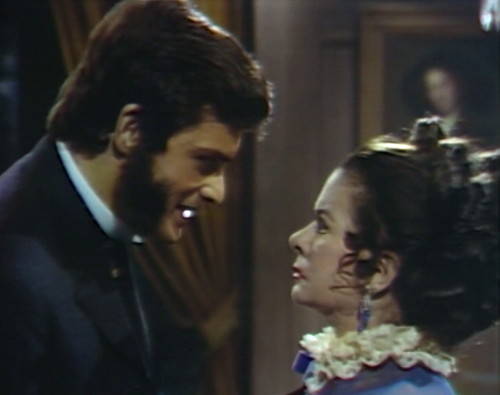 Now, as an actor, one of the many positive qualities that David Selby brings to the table is that he always acts like he’s about to kiss everybody that he talks to, up to and including his own siblings, so it’s not like this is a rare event. Still, this does seem like an especially charged encounter.

Barnabas cocks his head to the side, and says, “You know, you interest me a great deal.”

Another grin from the muttonchops. “I’ve gathered that.”

“It’s too bad that we started off so badly,” Barnabas sighs, “because you could be so much help to me, in adjusting myself to my new surroundings.” 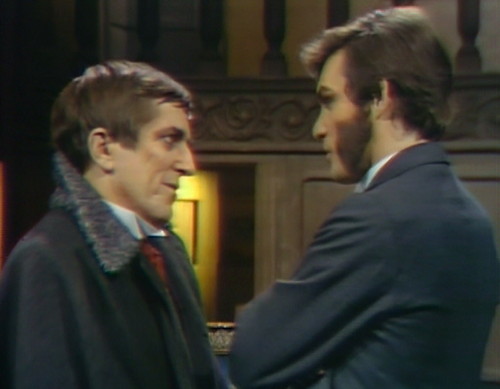 We pull back for an intimate two-shot. “Everyone here is so… secretive,” Barnabas twinkles.

“But you are so… open with your friends,” says Barnabas.

Quentin says, “Too open, my sister thinks,” which doesn’t mean anything. At this point, they’re both kind of swept away in the moment.

Then Barnabas says, “What do you know about Laura Collins?” and it’s like one of the great moments in flirting history.

He’s caught Quentin by surprise, getting him to drop his guard for a moment, and he isn’t usually that guarded in the first place. 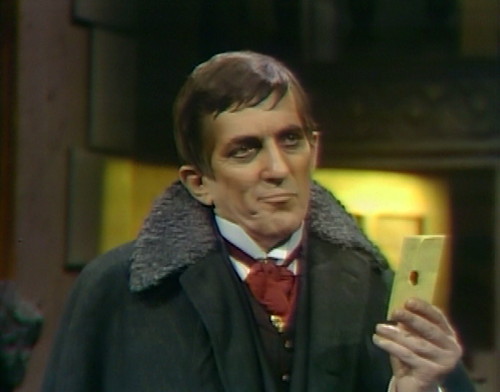 Quentin tries to get back on his feet by denying everything — “I wouldn’t have forgotten, Barnabas, now would I?” — but it doesn’t last.

Barnabas picks up a paper from the table, and says, “Here is a cable from Alexandria. Perhaps that will refresh your memory.”

This is a strong enough moment for an “oh snap!” music cue and a commercial break, because this is a television show where, rhetorically, the only thing that packs a stronger punch than “But the portrait!” is “Here is a cable from Alexandria.”

And darn it, wouldn’t you know, the grandfather clock strikes five, which reminds Barnabas that he’s got to get back to his coffin before dawn. And we were just getting somewhere really exciting, too.

“What if I decided to find out everything I could about you?” Quentin smiles. “You’re much more mysterious than Laura.”

“I don’t mean to be,” says Barnabas, mysteriously.

“You know, I don’t even know what business you’re in.”

“Oh, really. Is that why you travel to Bangor so often?”

“Yes, I have connections with a banking firm there.”

“Really,” Quentin says. “Well, tell me, are you going to Bangor today?”

Barnabas makes some vague excuses, and then our old friend Convenient Rooster makes his presence known, greeting the dawn from that invisible farm that’s apparently next door to everywhere. 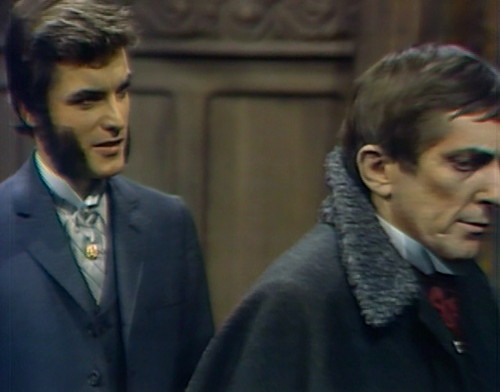 Disappointed that Barnabas seems to be rushing off, Quentin says, “My questioning has made you nervous.”

“Not at all,” Barnabas mutters.

“Then why are you in such a hurry to go? The cook will make us a marvelous breakfast.”

“Well, if you don’t go to Bangor today, then why don’t we have lunch together?” 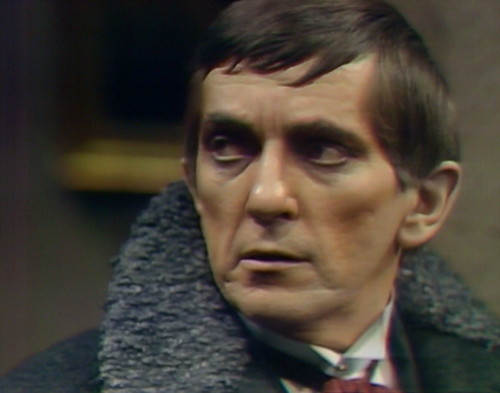 Barnabas turns around, and Quentin says, “You do have lunch, I presume?”

And Barnabas has the saddest look on his face, because Quentin has finally asked him out on a date, and he can’t go.

But don’t worry, Barnabas, you’ll get another chance. You’re bound to run into Quentin again, sooner or later; it’s not that big of a cast.

Barnabas tells Sandor, “There was never anyone, or anyone to — that opened that coffin.” Sandor responds, “What does it mean, then?” which is a fair question.