As today’s episode begins, eccentric millionaire Barnabas Collins emerges from the basement, and wouldn’t you know it, the gypsy’s on the fritz again.

“You should leave tonight,” she mutters. “Tch, I am not permitted to tell you what to do, am I? What do I care what you do?”

She sighs, and throws her hands in the air. “I should not have said that, I should go and talk to Sandor, and say, let us hitch up the wagon and go! But you have taken Sandor from me. When they find you in your coffin down in the cellar…”

See? This is what happens when you leave your gypsy running all day. He needs to get an EnergySaver or something.

But you have to admit, she’s got a point. The mundanes over at the big house have noticed that Charity Trask has a bite mark on her neck, and you know how people get about their whole “top of the food chain” paranoia.

Magda says, “You wanted them to know, didn’t you?” and earns herself one of Barnabas’ pouty expressions.

“You think I did this by choice?” he barks, and then moves center stage for a strange interlude. “I don’t expect you to understand… No one could. My only mistake is my unwillingness to give up what life I have. Can I be blamed for that?”

Magda narrows her eyes, thinking, Yes, of course you can. What are you even talking about?

But Magda is the Jiminy Cricket these days, a thankless role that’s often played by the Grayson Halls, Thayer Davids and John Karlens of the world. It’s a losing proposition with Barnabas, but somebody has to stand there and try to talk sense to the man.

“If you continue to see Charity Trask,” she snarls, “other people will be ‘summoned’ to your coffin. And they will come with a stake and a hammer.”

He says, “You’re right. We must act quickly. Go to Laura Collins, make some excuse, but spend the evening with her.”

This is how you can tell that Magda’s a seasoned professional: she doesn’t blink and say, What does that have to do with anything? If you’re going to spend time with Barnabas, you learn to cope with these sudden hairpin turns in the conversation.

It’s no use; Barnabas Collins is absolutely determined to make life difficult for himself. Last evening, he was introduced to Laura Collins, and he took one look at her and decided that she’s a dangerous enemy who must be neutralized immediately. But I suppose everybody has that reaction to Laura, she’s not big on making friends.

His issue is that he recognizes Laura as the woman who married his uncle Jeremiah back in the late 18th, and she died in a fire. So he makes the same deductive leap that Quentin did on seeing Laura: Hello, you’re dead, I must instantly plot your destruction.

I’m not sure what Barnabas is getting so worked up about. He knows lots of people who have been dead for a hundred years, it’s practically his entire social circle.

So he’s pulled an old portrait out of the attic, which proves that the Laura he knew then is the Laura they know now. Or they just look alike or it was a lousy artist or it’s a coincidence, it’s hard to say. This is why you don’t see a lot of murder trials where they bring in an oil painting as evidence.

“I must know the truth about Laura Collins,” he declares. “I have this fear that she will defeat me, unless I find out.”

The obvious response is: Why? She has exactly nothing to do with you. So far you’ve spent thirty-five seconds in her presence, and I don’t think she even remembers who you are.

This is why normal soap operas don’t usually have a main character, so there can be separate story tracks that only intersect occasionally. But on Dark Shadows, Barnabas has to participate in every story, and in a plot-stocked period, it’s like following a kitten around. He’s got a long list of top priorities. 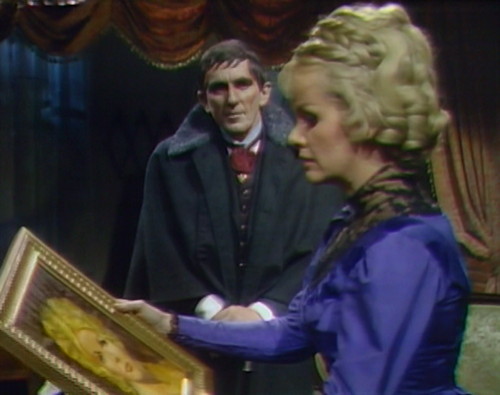 So then guess what he goes and does? He heads straight for Laura’s, to show her the only thing that’s guaranteed to raise her suspicions and make Barnabas her target — the portrait!

And she blushes and stammers, obviously, and says, “Why, I might have sat for this myself.”

“Yes, you might have!” Barnabas smirks. “You must have had a near-relative living in these parts, a hundred years ago.” His dialogue is studded with these “never drink wine” moments, where he’s winking at the audience so broadly that you have to believe that the other characters can tell. Magda was right, he really does want to get caught.

But Laura does seem rattled, so hooray, that’s one point for Hamlet, I suppose. “The Murder of Gonzago” made King Claudius uneasy, well done. Now what?

Brightening, Laura declares, “I shall take this as an omen.”

This doesn’t leave Barnabas with a lot of conversational options. What do you say when someone tells you they’re taking something as an omen? So he just kind of wanders off to see what Sandor’s up to. The end.

They must be having a ball in the booth for the beginning of act 1; they keep putting Barnabas and Magda in super-tight close-ups that they aren’t expecting. At one point, they zoom in on Barnabas’ eyes for a while, and then zoom out for a blurry two-shot with Magda. Then Barnabas takes a step forward, completely out of his light, and does the next line in darkness.

Barnabas has an Elmer Fudd moment when he’s talking to Sandor in act 1: “Wait a minute. If I’m correct, they buwied her in the crypt underneath the old meeting house.”

When Laura and Magda talk about the tarot cards, something is heard bumping around in the studio.