“You saw me die? What a bizarre thing to say!”

Okay, get this: There’s an urn.

Inside the urn is an endlessly burning flame, obviously, because that’s what you do with fire, you put it inside an enclosed space and then it just keeps on going forever, without oxygen or any material to burn. But listen to me, trying to explain how fire works.

Okay, let’s take this from the top, and see if we can make any sense out of it. Edward’s wife Laura has returned to Collinwood, after running off with her dashing brother-in-law Quentin. Now she’s back to reclaim her children and her place in the family, which makes Quentin all kinds of nervous, mostly because he saw her die in Egypt. Oh, they were in Egypt, by the way. Also, it’s the nineteenth century.

I’m sorry, I’m trying to get this straight in my head, but when you actually write it down, it sounds kind of weird.

So Laura and Quentin went to Egypt together, not sure why, and they did not have an ideal travel experience.

“I know what I saw,” Quentin says, coming across her unexpectedly in the middle of the carpet. “You were sacrificed, on a burning pyre in Alexandria! You’re dead!”

Laura takes issue with his story, but only the part about her being dead. The idea that there were Egyptians in the late 1890s performing human sacrifice kind of whizzes by, unchallenged.

I want to drill down into this concept a little bit, so I’m going to jump forward to tomorrow’s episode, because it’s not like there’s a rule against it.

In tomorrow’s episode, Laura finds Quentin in the cottage, and he tries to murder her, because Quentin’s reaction to everything he sees is to either kiss it or kill it. Suddenly, he’s seized with a supernatural fit of pain, represented here by a harsh spotlight and a slow-motion heart attack. Don’t worry about him, he’ll be fine.

But this is the moment that Laura decides to dig into the backstory. He begs for her help, because he feels like he’s about to die.

“Do you think I wanted to die in Alexandria,” she says, “when the fire priests dragged me to the sacrificial altar, screaming?” He tries to tell her not to change the subject, but you know how women are.

That’s the end of the anecdote. Personally, I don’t think it’s funny, but maybe you had to be there.

But the point is: What in the world is a fire priest?

“Do you think I wanted to die,” she says, “when the fire priests dragged me to the sacrificial altar?”

So apparently there’s something in Egypt that’s called a fire priest, and there’s more than one of them. I don’t think we ever get any more details on this particular postcard from the infinite, so we’re left to work out the rest of it on our own.

Why did the fire priests need to sacrifice somebody? Why did they choose Laura? And, most important: Is the answer to her question supposed to be “No”?

Because, yeah, I do think you wanted to die when the fire priests dragged you to the sacrificial altar. THAT IS YOUR WHOLE THING.

I mean, the premise of a lady phoenix walking through time and screwing with the Collins family every couple generations is already shaky.

But if they insist on showing me a make-believe fire lady who all she wants is to immolate herself and her children, then the thing that she’s not supposed to do as soon as she walks through the door is complain about somebody burning her alive. That is your deal. How do you not get that? 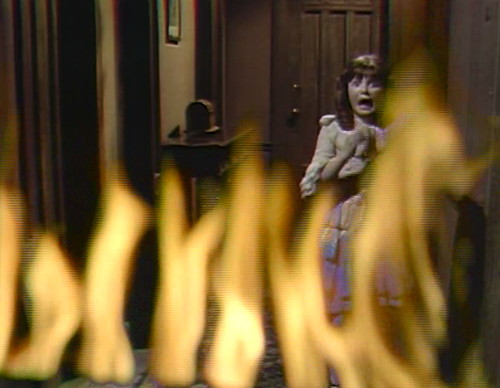 And another thing: Why do you marry people and have children with them, abandon them for a couple of years, and then come back when they’re ten years old so you can burn them alive?

And even if that’s a thing that you do: Why do you try to do it within the same family? I mean, if you succeed in bringing Jamison and Nora into the fire with you, then who are you going to come back and marry 70 years from now, when you want to do it all over again? Doesn’t this process cut down on the number of available descendants? And how do you even come up with that, as a lifestyle?

And then the urn; don’t even get me started with the urn.

There’s a sequence in tomorrow’s episode where Laura suddenly feels faint and collapses into a chair. We hear an urgent thinks monologue, as she prays for survival.

Laura (thinks): Great Sun God Ra — bearer of warmth and fire! — grant your daughter the gift of life! Fill her veins with fire! Hear me, I pray you! Without you, I cannot LIVE!

Then a little Chromakey urn appears on the screen, moves towards her and then slowly fades away, and that’s it. That’s where we leave Laura for the day, unconscious in the drawing room. The next time we see her, it’s Wednesday, and she’s fine.

So I’m trying to engage with these concepts, I really am — but if she serves the Great Sun God Ra, then why do the fire priests have a problem with her? Are the sun priests different from the fire priests?

And why would the Great Sun God Ra want his loyal servant to invest more than ten years in a scheme that, at best, is going to result in the fiery slaughter of a couple of rich kids from Maine? What kind of return on investment is that supposed to be?

And if that’s your plan, then why would you run off to Egypt two years early with your reckless, sexy brother-in-law? I mean, I get why you’d run away with him — that is the only piece of this backstory that I understand — but how does random infidelity figure in to the larger cycle of pointless death and even more pointless rebirth?

So, to sum up: I do not need to hear your head-canon theories explaining why there are so many overlapping Lauras, and why they seem to be obsessed with the Collins family. This is not a continuity problem. The problem is that there is not even a single element of her entire storyline that makes sense. She just says things and does things, as the world burns.

Edward stutters on a word: “You could never be that, even if you w-w-welcome here!”

Rachel tells Tim, “I don’t believe Mr. Collins would send his children back to that place!” The children have never been to Worthington Hall, so they’re not being sent back.

Rachel asks if Tim killed Simon, and Tim answers, “Trask says he can prove I can.”