“I understand a great many things, including her desire to kill you!”

Quentin says, “A lot has happened while you were away, dear brother,” and isn’t that the truth. Dark Shadows has been sprinting through plot points for weeks now, and if you need to catch up on current events, this is all the help you’re going to get.

“One night, my dear wife escaped from wherever you had her locked up. She found me in the cottage. Well, you can imagine how surprised I was at seeing her. But that was nothing, compared to how I felt when she put the knife in my chest.”

Edward cries, “Good heavens!” and Quentin just smiles, because Quentin is magical and lives entirely on surprise. “Rather shocking, isn’t it?” he says. “You know, at one point I was actually declared dead?”

“Dead?” gasps Edward, horrified. “Yes,” Quentin says, “but let’s spare the grisly details,” and then he just starts talking about something else.

Now, as you’ll recall, Quentin wasn’t just “declared” dead last week. Dude was dead. Like, burn magic herbs to lure the zombie back to his casket dead. Like, bury him and pour cement on his grave dead. You don’t see a lot of people walk away from that kind of dead.

So anybody who watched the show knows how dead Quentin was; that’s the only thing anybody talked about all week. But if you happened to miss Monday’s resurrection scene, then you’re probably hoping for a more detailed recap than “let’s spare the grisly details.”

In fact, that’s not a recap at all; it’s the anti-recap — specifically bringing up the thing that you missed, and then not telling you what happened. It’s a violation of everything that Dark Shadows used to stand for, up until a couple months ago. 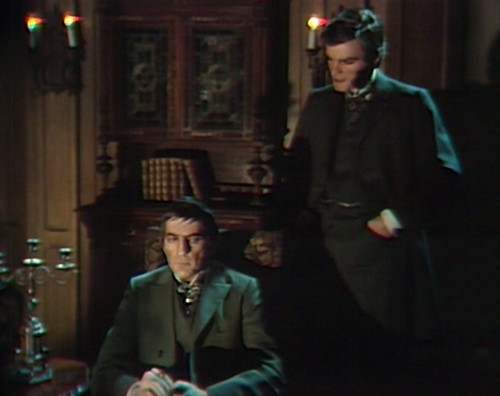 Now that I think about it, even if you did catch Monday’s episode, you might have missed the explanation. Here’s the only conversation anybody had about Quentin’s recovery.

Quentin:  That man — Reverend Trask — he was my savior?

Quentin:  But you don’t believe it.

Barnabas:  I didn’t say that.

Quentin:  Cousin Barnabas — do give me some credit. Who do you think saved me?

Quentin:  I know what she would say! I want to know your explanation of my sudden, miraculous return to life.

Barnabas:  You dabble in… odd things. Perhaps one of your “interests” resulted in this.

Quentin:  Delicately put. What an interesting life I’ve had, don’t you think?

Barnabas:  I’m beginning to find out just how interesting.

And that’s it; that’s the only thing they’ve said as of press time. Quentin dabbles in odd things. That’s an anti-recap if I ever saw one. 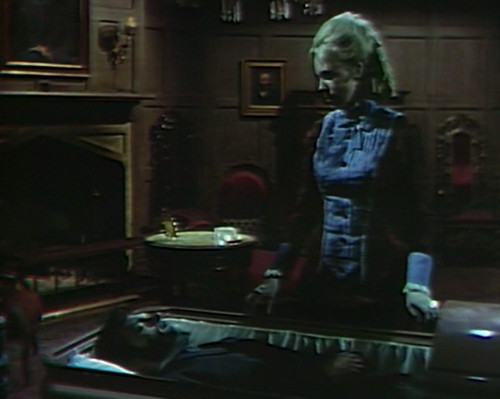 Now, if you’ve been watching faithfully, and paying attention, and taking notes, and you own the box set, and you’ve got Dark Shadows Wiki open on your iPad, and you’ve already watched the entire series three times, then you can probably guess that they’re referring to Angelique, the sorcerous soap vixen who was responsible for raising Quentin as a zombie in the first place.

But they don’t actually say that, and it’s not necessarily the only way to interpret this conversation. Angelique hasn’t been on the show for a week now, and nobody’s even been talking about her. In fact, given all the insane things that have happened on the show in the last few weeks, Angelique hardly even stands out. 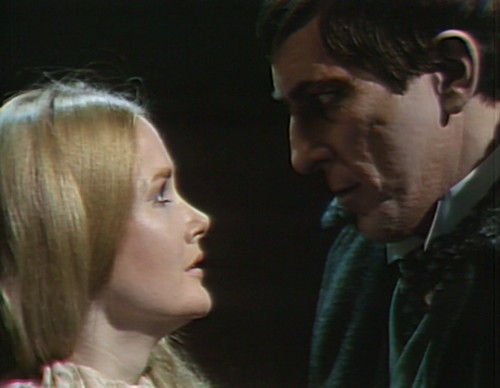 And it’s getting harder to tell which story threads we’re meant to be paying attention to. Today’s episode opens with Barnabas biting Charity Trask, a brand new character who was just introduced yesterday.

They have one of those weird post-fantasy-metaphor-sexual-assault vampire scenes, where the victim swears to help and protect the guy who just raped her, because that’s what happens after you rape somebody, and then he says good night, and that’s it.

The next thing you know, it’s morning, and they do another one of the standard post-vampire-bite scenes, where the victim feels a little weak and complains about how bright the sun is.

Charity walks outside, shading her eyes from the glare, and then we don’t see her again for two weeks. So if you thought this episode was going to be about yesterday’s big vampire bite cliffhanger, then sorry, the show has other things on its mind. Maybe we can interest you in a girl sitting at a desk and drawing Egyptian hieroglyphics with a crayon.

That’s another thing that’s going on right now, coming out of approximately nowhere. Edward and Quentin are in the middle of their anti-recap conversation, when they’re interrupted by young Nora, who wants to use the desk to draw a picture.

And that’s how impossible the show has become — the guys have to stop their plot-related conversation and walk over to the drawing room set, so the little girl can sit here and mess around with crayons. This is not typically a thing that television shows do.

And the crazy thing is that this is setting up a story thread that’s completely separate from both the Barnabas-biting-Charity story and the how-Quentin-came-back-to-life story.

I could also list off a whole other set of independent story threads going on right now, like Quentin’s marriage to Jenny, and Rachel’s backstory with Reverend Trask, and how Barnabas is going to prevent Quentin from haunting the family in 1969.

The audience watching this show every afternoon needs to keep a lot of different stories in mind at the same time, and there are very few clues to help you figure out which ones to pay attention to. Nora drawing hieroglyphics could turn out to be the biggest game-changer of the entire series, or they might just forget all about it and go over to the Old House to see what the gypsies are up to for a couple days. There is literally no way to tell. 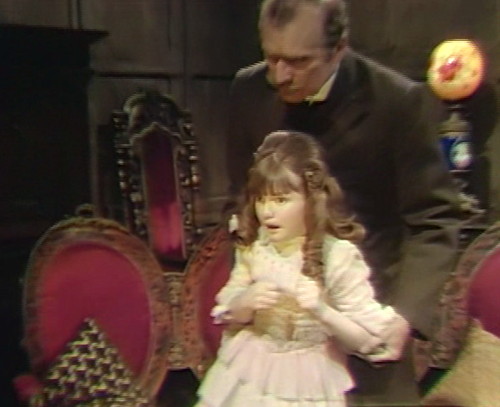 You’d imagine that juggling all of these complex interlocking storylines would be terribly hard on a daytime television audience, but by all accounts, the audience ate it up with a spoon and begged for more. Dark Shadows is defying every known law of daytime television, making a completely unpredictable show with an incredibly high information-density, and they don’t even do recaps anymore to help you remember what’s going on. And yet the ratings went up.

You know, it’s almost like the people who have been making soap operas all these years might be wrong about how smart housewives and teenagers actually are. Is that possible?

If anybody took Dark Shadows seriously as an example of a massive multiplayer television experience, then it honestly could have changed the entire approach of daytime television storytelling. But nobody saw it that way.

They got distracted by the content — dismissing it as a goofy, melodramatic spook show with no nutritional value — and they didn’t look closely enough to realize that this was far and away the most challenging narrative that had ever been performed on television. Seriously, name anything else on television before 1969 that even comes close. It can’t be done.

But nobody saw it that way, and daytime television just kept on patronizing and pandering to an audience that the producers never respected. But for a minute, here in the late 19th century, we get a glimpse of what soap operas could have evolved into, given half a chance.

A world without recap. Just imagine what you could do.

I was pretty sure that Nora’s box of crayons would turn out to be an anachronism, but then I looked it up, and there really were wax crayons manufactured in the late 19th century. Binney & Smith, the company that later became Crayola, began selling crayons in 1903. So there you go, Dark Shadows is right and I’m wrong. There were probably zombies and werewolves and Raggedy Ann dolls back then too.

Edward slams the study door when he sees Quentin rummaging, and the whole wall shakes.

You can hear people walking around in the studio while  Edward is examining Nora’s drawing. 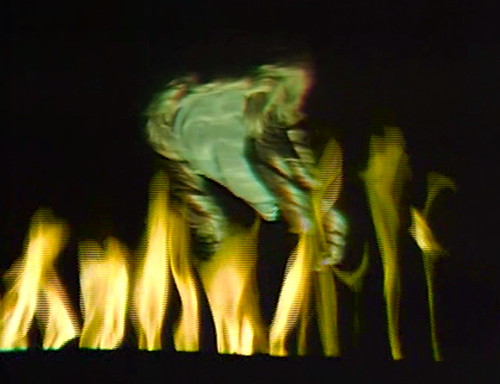