“I see a night of terror! I see strange screams, muffled sounds!”

Rachel Drummond, plucky girl detective, climbs the stairs to the Collinwood tower room. According to legend, no one has set foot in this room for a hundred years, but something’s happening up there — something sinister.

As she climbs, Rachel reviews the case. She came to this big spooky mansion as the governess for Edward Collins’ two young children — but nobody is willing to say what happened to their mother. “My wife is not dead,” Edward said. “She is away. She is going to stay away.”

But Rachel’s seen a light in the abandoned tower room, which is impossible. She’s seen the maid bring a new doll into the house, but the children say they never received it. And every time she asks a question, everyone tells her that some things are better left unanswered.

They can’t put off Rachel that easily. There’s a mystery hidden in this house — something sad, and dangerous — and she’s going to get to the bottom of it. The idea that this is none of her fucking business does not seem to have occurred to her.

So we’re back to Jane Eyre today, by way of Nancy Drew. Jane asked some tough questions about the mysterious happenings at Thornfield Hall, but she never got all the way up to the doorknob like this. It’s locked, by the way, so don’t worry about anything happening today; this is the beginning of Friday’s episode, and everyone knows that the big Friday surprises don’t get revealed until the cliffhanger at the earliest.

Although they are burning through the story a lot faster than usual these days. With a new writer on the team, the show feels more confident than it’s ever been.

In February 1969, there were basically two story threads: Quentin possessing the children, and Barnabas and Julia trying to help their werewolf friend, Chris. The werewolf storyline had a couple romantic subthreads about Chris’ relationship with Carolyn and the unexpected appearance of his ex-girlfriend Sabrina, and there were vague hints that the two main stories were connected somehow, but that’s about it.

An episode would be about one story or the other, and the cast basically split up between the two stories. David, Amy, Maggie and the ghosts were the main players in the haunted house story, and Chris, Barnabas, Julia, Carolyn, Ned and Sabrina were mostly devoted to the werewolf story.

All the other characters were in supporting roles, and didn’t really have storylines of their own. Liz, Roger, Mrs. Johnson, Willie and Professor Stokes would show up and talk to people sometimes, but even when they had a big moment — like Stokes’ exorcism, or Roger’s stern defiance of the ghosts — they were really just secondary players in somebody else’s story. Nothing was going on over at Stokes’ place, as far as we know.

But March 1969 is exploding with storylines, so many that some characters have to double up. Rachel is currently involved in four different story threads: the mystery of the light in the tower room, the secret of Edward’s missing wife, a love triangle with Barnabas and Angelique, and an entirely different love triangle with Quentin and Beth. So far, it seems like Edward’s wife is locked in the tower room, so those two threads might turn out to be the same story, but we don’t know for sure.

There’s also Judith inheriting Edith’s fortune and oppressing her mutinous brothers; Quentin’s dark alliance with Angelique; plus Barnabas is a vampire by the way, which used to be enough to carry the entire show for weeks, and is now basically just background information.

And then there’s the overarching storyline, which is that Barnabas is in this time period in order to stop Quentin from haunting Collinwood in the 1960s. He has no idea how he’s going to accomplish that, and that thread is actually kind of buried in the background for now. They hardly even mention it anymore, except in the opening narrations. By my count, that’s eight overlapping but essentially independent storylines happening at the same time, and it’s only been three weeks. 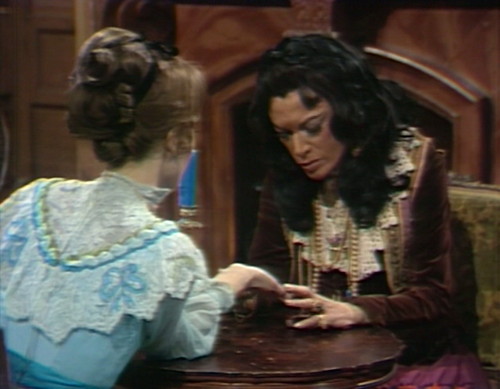 This is one of the reasons why Dark Shadows fans love the 1897 trip; there’s so much going on. In a story, the number of simultaneous story threads is a measure of narrative complexity, and the more complex the story gets, the audience has to devote more attention to following it.

Right now, each episode has one or two core storylines to advance, but there are always a couple more woven throughout. Here’s the breakdown:

Wednesday (ep 713). Main threads: Mainly the tower, with a side interest in Angelique/Barnabas/Rachel. Subthreads: Rachel comes close to discovering that Barnabas is a vampire, and a huge turning point for the missing will story.

Thursday (ep 714). Main threads: The reading of the will, and Rachel going to the tower. Subthread: An important Quentin/Beth/Rachel scene.

Friday (ep 715). Main threads: Almost entirely tower and missing wife, which Rachel thinks are connected. Subthread: Magda talks to Rachel about the amulet, which is a reference to the Angelique love triangle.

That’s seven of the eight current story threads, all layering on top of each other. The only storyline that doesn’t get any significant play this week is Barnabas trying to prevent Quentin from haunting Collinwood, and that’s supposed to be the big one that we’re most interested in.

Oh, and also, one of these threads is an adaptation of Jane Eyre. This episode may have the most blatant plagiarism from a classic source that they’ve ever done, with Rachel waking up to find that her employer’s bedroom has been set alight by an unknown figure. As in the novel, the fire is doused, hasty explanations are made, and the heroine is suspicious of a female servant.

The only real difference is that in this adaptation, Jane isn’t in love with Mr. Rochester; she’s involved in two distinct love triangles, including one with Mr. Wickham and Grace Poole, and another with Count Dracula and Abigail from The Crucible. Plus, we’re simultaneously doing a time-travel sequel to The Turn of the Screw, with comedy gypsies.

Oh, and performed for us, too — an audience inhabiting a science-fiction future undreamed of by the producers at the time. Here we are, almost fifty years later, watching the show on VHS, DVD and streaming video, on demand and as often as we like.

We can watch and rewatch these episodes, and see all the interlocking clues slot into place. The original audience only saw Edward berating the cowering arsonist once, convinced that this is Edward’s lunatic wife. When the twist in the tale is revealed next week, we can go back and watch this again, to appreciate how clever this sequence is. The audience that this was made for could only dream of the time-travel abilities that we now possess.

So of course we love 1897 more than anything else. It was made just for us, the undreamed-of descendants with magical box set powers. The only person who saw this coming was Magda, staring into the future in Rachel’s palm, and making a mental note to buy some shares in Hulu and YouTube.

I wrote about narrative complexity and televisual literacy last year, in “Episode 514: That Endless Summer“. That post quotes heavily from Steven Johnson’s 2005 book Everything Bad Is Good for You, which is a must-read for anybody who’s interested in television and storytelling.

There appear to be several edits in the show, including one in the middle of Rachel and Magda’s scene. Magda sees Rachel is wearing the amulet, there’s a skip in the music, and suddenly Rachel asks, “What did you see?”

Edward mixes up the words “error” and “effort”: “I hope you appreciate the importance of discipline, Miss Drummond. It would be a serious effort — on your part, if you… were to stop that. Dreadful error, and a lack of training.”

When Edward reprimands Rachel in the foyer, there’s some audio bleedthrough of a man talking. It sounds like a news report — during a pause, the word “welfare” can be heard clearly.

When Beth closes the front door after Magda’s entrance, the mirror on the foyer wall wobbles.

When Rachel talks to Magda in the Collinwood foyer, she’s got the amulet hidden inside her costume. When Magda says, “The amulet, it will protect you,” Rachel pauses for a moment — possibly because she realizes she’s supposed to have the amulet visible in this scene. When Edward interrupts the conversation, Rachel takes the opportunity to hurriedly fish the amulet out from her high-collared dress.

12 thoughts on “Episode 715: The Secret of the Mysterious Clue”

Leave a Reply to Jason B. (@JasonXHowe) Cancel reply