“I know Collinwood more intimately than anyone else in the family.”

Her name is Rachel Drummond. Her journey is beginning, a journey that she hopes will open the doors of life to her, and link her past with her future. A journey that will bring her to a strange and dark place, to the edge of the sea, high atop Widows’ Hill, a house called Collinwood — a world she’s never known, with people she’s never met, people who tonight are still only shadows in her mind, but who will soon fill the days and nights of her tomorrows.

And, man, talk about linking the past with the future. Here we are three years later, and we’re still doing Jane Eyre.

I mean, don’t get me wrong, Jane Eyre is a good story. It gets a bit wobbly around chapter 34, when Jane’s creepy cousin St. John tries to hypnotize her into marrying him and becoming a missionary in Africa, but overall, it’s great. It’s certainly more readable than The Turn of the Screw.

But we’ve been down this road before. Dark Shadows began with Victoria Winters, the innocent orphan girl, showing up for governess duty at a big, fancy house filled with romance and furniture and terrible secrets.

It’s possible that Roger’s name was meant to be an echo of Mr. Rochester, Jane’s brooding employer with a missing wife, and if you really wanted to stretch the point, Roger’s car accident in episode 15 might be the DS version of Rochester getting thrown from his horse in chapter 12. I’m just tossing that out there as a possibility.

I suppose that’s the point where Vicki and Jane parted ways. Rochester’s horse accident was kind of an 1847 meet-cute, back before they’d figured out the cute part. That’s how Jane and Rochester meet, and they end up falling in love, which certainly didn’t happen with Vicki and Roger.

For one thing, Vicki might have ended up being Roger’s niece, if Elizabeth turned out to be her mother, so a Roger romance was nixed from the start. Although St. John turned out to be Jane’s cousin, so who knows.

But that’s how things go with these narrative collisions — you take the bleeder valve out of Jane Eyre and crash it into a tree, and anybody who survives gets to be on your soap opera. 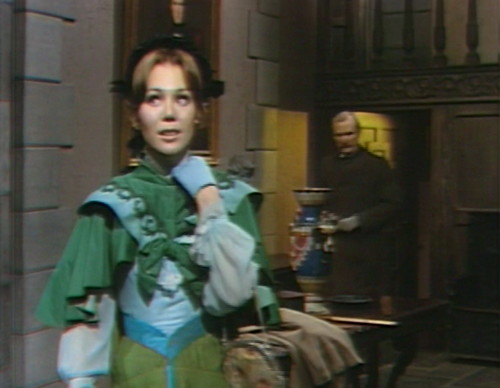 Anyway, Rachel. She’ll actually get more bona fide Jane Eyre material than Vicki did — see especially chapters 7, 15 and 26 — so it’s a bit of a shame about her personality.

Personality matters here, because Jane Eyre is really about Jane’s developing consciousness, and the book is generally regarded as the first novel to really express a character’s thoughts and feelings as she moves through the world. Jane is smart, sassy and strong-willed, and her relationship with Rochester develops along the same lines as Elizabeth Bennett and Mr. Darcy in Pride and Prejudice, meaning they tease and berate each other mercilessly until somebody proposes.

So it’s a shame that Rachel appears to be operating entirely on autopilot. She’s wide-eyed and overwhelmed when she first enters Collinwood, as anyone might be, but the writers forget to take her out of first gear.

Rachel was in three scenes in Friday’s episode, and the first scene in the train station is really the only one where she’s an active participant.

In her second scene, she wafts into Collinwood — wide-eyed, overwhelmed — and doesn’t get a single line. Quentin gets to do a whole monologue, walking around her and evaluating her, and she just stands there, not even reacting very much. The scene is actually about Quentin being funny and pissing off Edward, and Rachel is just a prop.

There’s a little break for a scene in Edith’s bedroom, and then we return to the foyer for Rachel’s third scene. Quentin addresses her like a person this time, and she gets to say three sentences — I’m Rachel Drummond, I’m the new governess, and Yes, of course — before the real characters walk into the drawing room and have an actual grown-up scene. 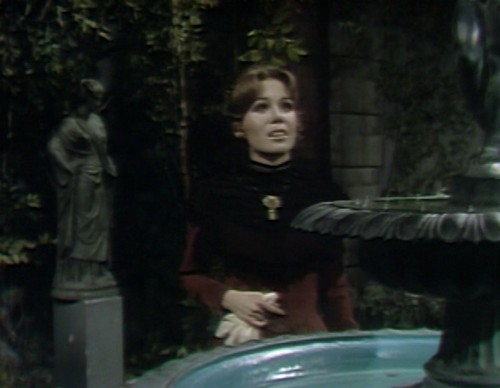 That brings us to today’s episode, where Rachel wanders out onto the terrace and instantly forgets why she went out in the first place. She walks up to the fountain like she’s never seen one before, and she’s not sure what it’s supposed to do. Then she gets bored and sits down on a bench, staring off into the middle distance and going over the TED talk on particle physics that she’s planning to give later in the evening. 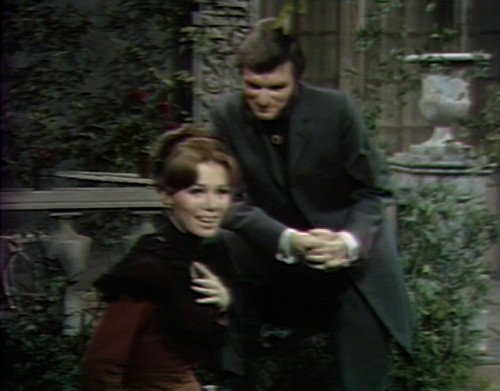 And then here comes the wolf man himself — Quentin Collins, Dark Shadows’ answer to the declining birth rate in America. He walks right up to her, puts one leg up on the bench, and basically gets his crotch as close to her face as he can manage.

He offers to take her on a tour of the house, boasting, “I know Collinwood more intimately than anyone else in the family.” He puts some extra stress on the word “intimately,” because it’s Rachel, and if she doesn’t understand this body language, then there’s really no need to be subtle.

Then he asks her to call him Quentin. She says, “I don’t think your brother would approve of such familiarity,” and he says, “No, I suppose he wouldn’t.”

Then he sits down on the bench, practically on top of her, and says, “But then, he doesn’t have to know about it… Does he, Rachel?” And he raises an eyebrow. I believe by 1897 standards this means that she’s already pregnant.

She gets up, and he asks, “Are you frightened of me?” She chuckles, “No, of course not,” which is exactly the wrong answer.

He says, “What, then?” and she says, “Well, if anything, perhaps it’s — it’s just because I’m so new, and… and still so unsure?” And then she looks at the guy who’s five seconds away from ruining her entire life, and she gives him a shy smile.

And, you know what? I would love it if somebody could show this to Charlotte Brontë, and tell her that this is supposed to be Jane Eyre. I’m not sure what she’d do, but I would like to be there when it happens, with a camera and maybe a couple of EMTs, just to be on the safe side.

Then they have a conversation about the tower room, which she finds picturesque, and Quentin tells her that nobody’s been in that room for a hundred years, since a woman took poison and died there in 1796. He whispers this directly into her ear from so close behind her that she’s probably going to need a penicillin shot tomorrow. 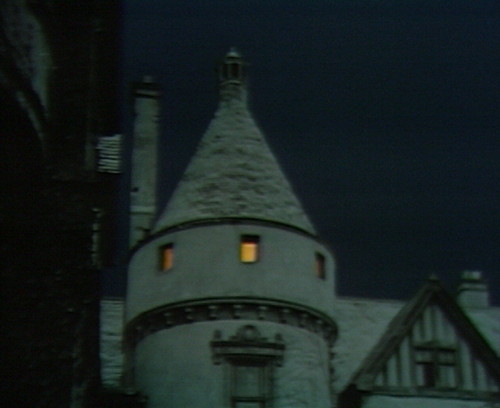 Anyway, the point of all this is that later on in the episode, she sees a light in the tower room, which is a big mystery. She goes inside and tells Edward about it, and he gets all flustered and weird, and Judith scurries off somewhere, and by the time Edward and Rachel get back out to the terrace, the light is gone, which means it was probably a reflection or her imagination or a weather balloon or something, because she didn’t see a light up there, how could she, what tower room, where would she get the idea that we have a — a what is it, a tower? Tow-wer, what an odd sounding word, I don’t believe I’ve ever heard it before. What does it mean?

Now, this is setting up one of the Jane Eyre plot points, but it’s by way of Gaslight and those dreary paperback gothic romances with titles like The Dark Shore or The Secrets of Hillyard House.

Jane never saw any lights in any towers, so you can’t pin this one on her. The “you didn’t see a light in the tower room” scenario is actually a reference to Nathan Forbes trying to drive Millicent insane last year, in episode 448.

So they’ve done it; they’ve finally done it. Dark Shadows has started borrowing plot points from itself.

When Edward closes the drawing room doors for the family conference, the boom mic can be seen overhead. You can also see the mic in the terrace scene, when Rachel gets up off the bench.

The camera’s aimed too high when Quentin says that Barnabas is a possibility, and you can see the top of the drawing room set.

When Rachel talks to Quentin about a tour of the house, you can see a studio light reflected in the windows.

Someone coughs in the studio when Quentin says, “I like you, Rachel.”

Sandor tells Edward that Barnabas is away for the day. Edward says, “Where would he go? He doesn’t know anyone in Collinwood.” He means Collinsport. Right after that, Sandor says, “He told me not to answer no questions, so I can’t tell you what you want to know.” He means ask no questions.

Edward tells Judith, “I have washed my hands of the entire affair. I want nothing more to know about it.”