As we’re settling into this 1897 time travel story, the thing that’s really remarkable is how much the writers have learned about setting up dramatic conflicts within the core Collins family.

It’s early 1969, and by this point in the show, the present-day family has been entirely nerfed. All of their secrets have been exposed, explained and apologized for, and any future story-driving difficulties have to be imported from the outside.

Last year, we spent some time with the 1795 family, and they were actually pretty well grounded too. Naomi was a drunk, Joshua was a grouch and Abigail was a fanatic spinster, but they were a functional family who would have carried on pretty well, as long as they could avoid having sex with pretty French vengeance demons.

But the Collins family of 1897 is absolutely out of their goddamn minds. At the start of today’s episode, Judith walks into her dying grandmother’s bedroom, and finds her brother Quentin strangling the old lady, and demanding to know the family secret.

This is the second time in two straight episodes that Judith enters a room and interrupts Quentin in the process of murdering a family member. She doesn’t even have that big of a reaction, she just shoos him out the door and gets on with her day. That’s how insane this family is; a murder attempt means nothing to these people.

The remarkable thing is that the old lady isn’t that bothered by the attack, even when Quentin’s hands are literally around her throat. Check this out:

Edith:  If you kill me, Quentin, you will gain nothing!

Quentin:  I’ll gain the satisfaction of having deprived Edward from knowing the secret!

Edith:  That would be very dangerous!

Edith:  (narrows her eyes) I’ll let you wonder about that.

I mean, how fierce is that? That’s, like, Ruth Bader Ginsburg level of old lady badassery. She just stares him down. 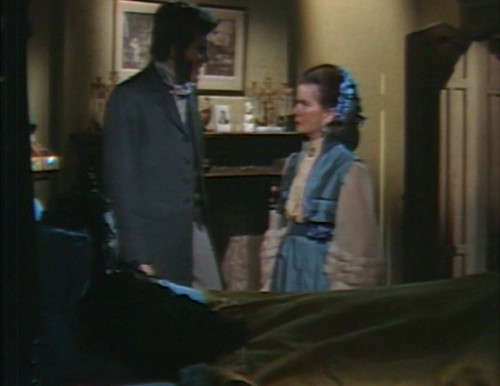 And then Judith calls a halt to the whole thing by marching up to Quentin and saying, “Get out of this room.” He makes a couple smart remarks, Edith tells him to do what his sister says, and he makes for the corridor. That’s how things work in this house.

Now, there’s no sense that Quentin is being weak here, just because he’s getting bossed around by his big sister. It is clearly the point of view of the program that it was just bad luck that Judith happened to come in before he was finished, because you can’t kill your own grandmother if somebody else is watching. It’s simply not done. The Collinses of 1897 are scared of nothing in this world except bad manners.

Sam Hall is the lead writer on the show now, and this is the first time Sam’s been allowed to create a whole new set of characters to play with. He takes the opportunity to make a world in his own image: witty, talkative and incredibly cynical.

Edith:  How anxious everyone is to know the secret.

Judith:  I wouldn’t tell anyone else. You know that, don’t you?

Edith:  Edward is the eldest, and he is the only one who may know. And let me tell you something, Judith — you’re better off not knowing.

Judith:  What do you mean?

Edith:  That’s all I can tell you — but even that, you mustn’t tell the others. Let them keep on feeding their anxiety.

I mean, again — holy cow. This old lady was threatened with death literally two minutes ago because of this secret, and she still thinks it’s funny to dangle it in front of everyone and make them go nuts over it.

You know, we never actually find out anything about the generation between Edith and her grandchildren. There must have been a Collins who fathered Edward, Judith, Quentin and Carl, but the parents are gone by now, and nobody ever mentions their names. They must have died of exhaustion, poor things, living in a house with these five nutjobs. 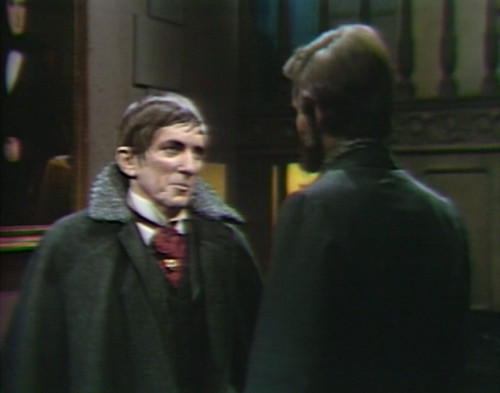 Downstairs, Barnabas comes over for a visit, and now Quentin is chatting with yesterday’s attempted murder victim.

Barnabas:  Well, I want to tell her that I’ve looked at the Old House, and I think it’ll be quite suitable.

Quentin:  I think I should warn you about something, cousin.

Barnabas:  What is that?

Quentin:  Your staying at the Old House will require my brother Edward’s approval.

Barnabas:  But your sister told me —

Quentin:  Sometimes my dear sister gets carried away by delusions of authority. The fact is, she has no authority whatsoever.

Suddenly, Judith shouts “I have enough, Quentin!” from the landing where she’s been eavesdropping. Then she walks down the stairs and continues the conversation with Barnabas as if nothing remarkable had happened.

Barnabas asks to see Edith, to present her with a family heirloom from the 18th century. Judith starts to lead him upstairs, and Quentin snaps, “You’re going to let him see her? I thought she was too ill to see anyone.”

“Well, who knows, Quentin?” she smiles. “The sight of a gentleman might do her some good.”

And oh my god, this family. Barnabas must be thinking, my own family wasn’t half as crazy as this, and I shot my uncle in the face. These people are out of their goddamn minds.

While Barnabas and Judith are upstairs, who should walk in but Edward himself, the eldest brother who we’ve been waiting for all week. He turns out to be Louis Edmonds in a mustache, which is just what we needed.

Quentin closes the drawing room doors and makes a grand entrance, just to see the look on his brother’s face. Edward’s brought a new governess from Boston, so Quentin does a little etiquette kung fu.

“Oh!” he says, circling the girl like a shark. “Well, well, well! What have we here? No, no, don’t tell me who she is, dear brother. Let me guess. Your new wife? No, too pretty. The new governess? No, much too pretty.” He stops, and looks shocked. “Good heavens, Edward,” he says. “She’s not your mistress!”

Quentin can get away with this, barely, because Edward is more polite than Quentin, and Quentin knows that he won’t want to scream at his brother in front of a servant.

You can basically get away with anything in this house, if you know how to push people’s buttons, and this is a family that’s done nothing for the last twenty years besides an ongoing research project on exactly where all those buttons are.

Meanwhile, upstairs, the week’s big mystery is about to unfold. Edith gets a visit from the new cousin from England, who’s brought a family heirloom once owned by Naomi Collins.

When she hears Naomi’s name, Edith leans forward, and asks, “What is your name, young man?”

He introduces himself as Barnabas, and she begins to get agitated. “Come here,” she says. “Come into the light, so that I can see you.”

He steps forward, and she points a bony finger at him. “You!” she cries. “You are the secret!”

Barnabas gasps, and so do we. It’s a fantastic twist, one of the best they’ve ever done. 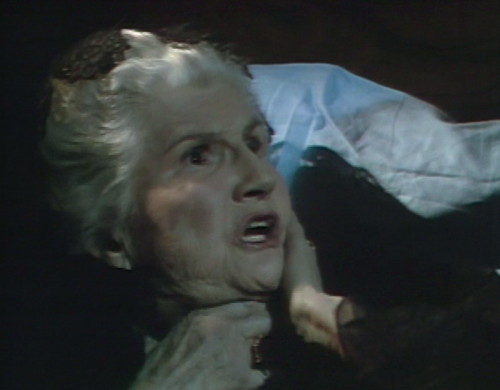 He takes a step forward, and she puts her hands up to protect her throat. “Don’t come near me!” she cries. “I know what you are!”

Before Barnabas can figure out what to do, Edward walks in. Edith screams for him to come to her, and he rushes to her side. 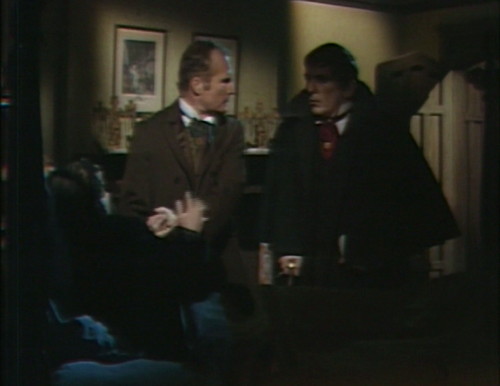 And then the most extraordinary thing happens. Edward says to Barnabas, “Would you leave us, please? It’s imperative that I be alone with her.”

And Barnabas says, “Yes, of course,” because that is the polite thing to do, and this is a world where Emily Post reigns supreme. He turns away, walks to the door, and presumably that is the end of him.

Edith will tell Edward that Barnabas is a vampire, Edward will organize a calm and well-spoken posse to drive a stake through Barnabas’ heart, and it’ll all be cleaned up by teatime. Barnabas should take a moment to write a brief thank-you note for their hospitality; otherwise, who knows when he’ll find the time?

Quentin looks outside when he hears Edward’s carriage approaching. He ducks back inside and closes the doors behind him, but they swing open. Rachel and Edward enter the foyer through the open doors, and they leave the doors wide open. They cut away to Edith’s room, and when they come back, the front doors are closed, although everyone is in the same positions.

When Edward brings Quentin into the drawing room, you can see the top of the set.