“Is this some kind of black magic?”

Fire in the lake: the image of revolution.
Thus the superior man
Sets the calendar in order
And makes the seasons clear.
Professor Stokes, this I Ching that you’re studying. How does it work?

For the last few months, Dark Shadows has concerned itself with two big storylines — the werewolf, and the haunting of Collinwood.

Currently, our sexy young wolfman, Chris, is all locked up in the secret room of the Collins mausoleum, unable to change back to human form.

Meanwhile, the spirit of avenging ancestor Quentin Collins has chased the family out of Collinwood, and they live in exile. Quentin is holding young David, the future of the Collins line, in a hidden room somewhere in this utterly haunted house, and we fear the worst. Both stories have reached a crisis point, and Barnabas and Julia have absolutely no idea what to do next.

So here comes Professor Stokes to tell us absurd things about Chinese divination, because wisdom comes from far away, and besides, seances are so 1967.

We’re finally in Quentin’s room, the secret hideout in the west wing where the children have been communing with dark spirits. Barnabas and Professor Stokes are rummaging around, hoping that a clue will present itself. Things look bleak, but you never know what you’ll come up with after a good rummage.

Suddenly, Stokes says, “Good Lord.” This can’t be good; Stokes is not easily perturbed. Pulling a brace of mysterious artifacts from a pigeonhole, Stokes announces, “I know a great deal more about Quentin Collins than I did a few moments ago.”

Steadying himself, Stokes asks, “Have you ever heard of I Ching?” Barnabas says no, obviously, because it’s a Chinese thing, and who even knows any Chinese people?

Now, as it happens, I know a great deal more about the I Ching than I did a few moments ago, because I just looked it up, and it’s an actual thing. I know, I thought it was made up too.

So now that you know that the I Ching is an actual part of Chinese history and culture, you should please excuse the following dialogue.

Stokes:  It is the oldest known book of divination and mysticism, written in China long before the time of Confucius. It is also the most dangerous.

Barnabas:  Why do you say that?

Stokes:  Because it is the least understood. Even Confucius, with all his wisdom, could not master it. So, Quentin Collins practiced I Ching… and I would guess his motives were anything but pure.

Barnabas:  Is this some kind of black magic?

That happens to be one of my all-time favorite lines in Dark Shadows, because it’s such a delirious, slap-happy moment of late 60s cultural insensitivity.

I mean, imagine if Professor Stokes reached into Quentin’s desk, said “Good Lord,” and then pulled out a Chanukah menorah.

The Professor turns to Barnabas, his face ashen. “Have you ever heard of Chanukah?” he asks. Barnabas has not.

“This is a menorah. It is one of the oldest artifacts of the Jewish faith, inspired by a rebellion in the 1st century BC. It is also the most dangerous.”

“Why do you say that?” Barnabas asks.

“Because it is the least understood. The ancient Maccabees only had enough oil to last for one night — but the light burned for eight nights.”

“Professor,” Barnabas gasps. “Is this some kind of black magic?” 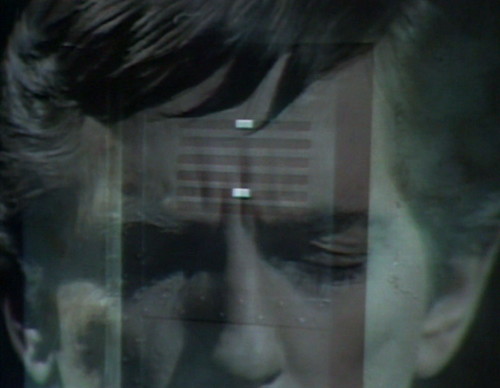 So, for the record: No, it is not black magic, and you’re a very silly television show for suggesting that it is. But credit is due, because the basic description of I Ching is actually correct.

There are six wands, each with a broken line on one side and an unbroken line on the other. You toss the wands in front of you, and then they’re arranged to form one of 64 hexagrams.

By the end of today’s episode, Barnabas gives it a toss, and Stokes announces, “It’s the 49th, or Ko hexagram, called the hexagram of Change.”

And guess what? The 49th really is the Ko hexagram of Change. They get the pattern right and everything. So that’s nice, at least somebody borrowed a book.

Now, the change that the 49th hexagram is referring to is a revolution — a social transformation that should only be attempted when every other avenue has failed.

For example: let’s say that your afternoon television show has been doing a crackpot adaptation of The Turn of the Screw, a novel that’s long on atmosphere and short on plot points. You’re planning to do the final scene of the novel later today, which means that now you need to come up with a completely new story.

We’ve arrived at the same problem that the show faced in November ’67, when Barnabas was on the rise, and they got to the point where they needed to either kill the vampire, or let the vampire klll some Collins family members, starting with the ten-year-old. They’ve now painted themselves into the exact same corner with Quentin.

So let’s cast these wands on the table, and see if the six lines of the Ko hexagram can divine what Dark Shadows is going to do next.

Changes ought to be undertaken only when there is nothing else to be done.

Amy:  Professor Stokes is wrong. David is at Collinwood.

Amy:  No! If they go back to Collinwood, they won’t find him. He wants you to find him.

Maggie:  Did he tell you that?

Amy:  You’d better go, Maggie — soon! — or David won’t be there anymore. Only Jamison will be there.

Amy:  Yes. That’s who Quentin wants David to be.

When we have tried in every other way to bring about reforms, but without success, revolution becomes necessary. But such a thoroughgoing upheaval must be carefully prepared.

Barnabas:  Is there enough light, Professor?

Stokes:  Everything’s splendid, thank you. I would prefer to be alone, if you don’t mind.

Barnabas:  How much time will you need?

Stokes:  An hour or two with these books should tell me how and why Quentin Collins used I Ching. When I know that, we can decide on a course of action. 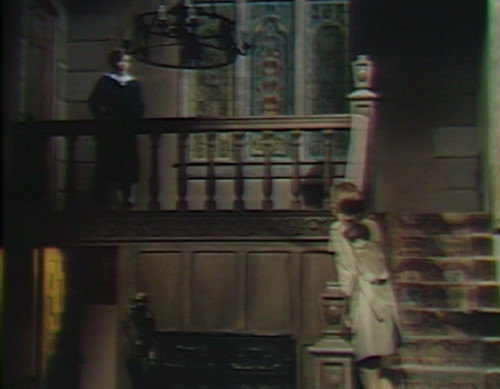 Maggie:  But you want to?

Maggie:  Then you can! David, just walk down the stairs, and into my arms! You can, if you try!

Not every demand for change in the existing order should be heeded.

Maggie:  Before we go… there’s one thing that you must do. You’ve got to send Quentin away.

Maggie:  David, you must! 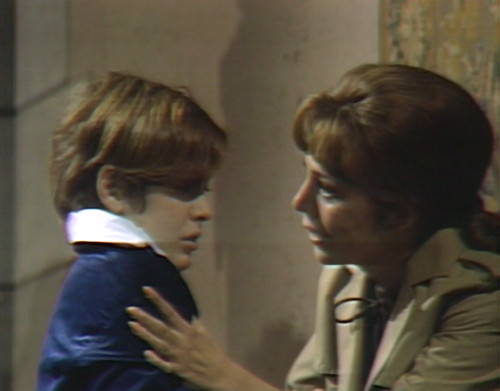 On the other hand, repeated and well-founded complaints should not fail of a hearing.

Maggie:  You have to send Quentin away. Now, I want you to turn around, and look into that door. 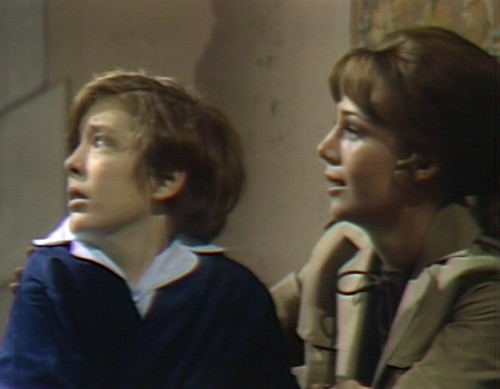 When talk of change has come to one’s ears three times, and has been pondered well, he may believe and acquiesce in it.

Maggie:  David, you’ll never be free, unless you send him away! Now turn your head around, and look through that door. 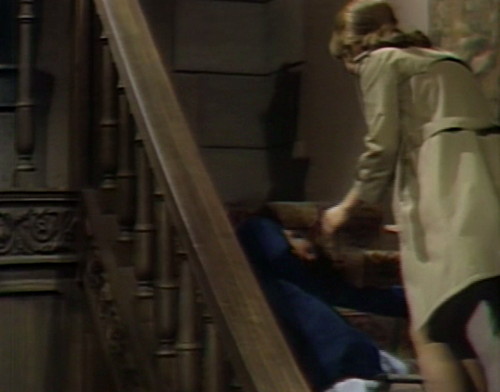 Then he will meet with belief and will accomplish something.

Radical changes require adequate authority. A man must have inner strength as well as influential position.

Barnabas:  How long do you think he has?

Maggie:  But there must be something you can do!

Julia:  If only we had a way of communicating with Quentin Collins.

Barnabas:  There may be a way, Julia. 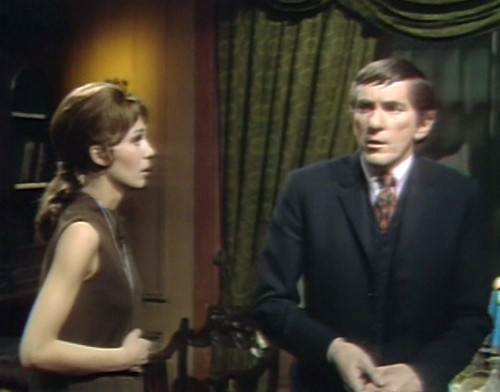 A tiger skin, with its highly visible black stripes on a yellow ground, shows its distinct pattern from afar. It is the same with a revolution brought about by a great man: large, clear guiding lines become visible, understandable to everyone. Therefore, he need not first consult the oracle, for he wins the spontaneous support of the people.

Barnabas:  Maggie, I want you to go up to David’s room, and stay with him. Under no circumstances are you to leave his side. Is that understood?

Maggie:  Yes… what are you going to do?

Barnabas:  I don’t know, myself. I don’t have time to tell you, anyway. Julia, come with me.

We must be satisfied with the attainable.

Barnabas:  Professor Stokes, this I Ching that you’re studying. How does it work?

Stokes:  Why do you want to know?

Barnabas:  I’ll explain it to you in a moment. Tell me how it works.

Stokes:  The I Ching is a means of sending one’s soul into the infinite. As you can see, each of the six wands is solid black on one side, with a white dividing line on the other. They are shaken, and tossed. When they fall, they’re arranged to form one of 64 hexagrams.

If we should go too far and try to achieve too much, it would lead to unrest and misfortune.

Stokes:  At this point, the subject sits, closes his eyes, and begins a period of the most intense concentration, picturing in his mind’s eye a door, with the hexagram painted on it.

For the object of a great revolution is the attainment of clarified, secure conditions…

Stokes:  He must have the willpower to continue, until he sees the door appear to open, away from him. When and if that happens, he rises from his body, and passes through the door.

Barnabas:  To find what?

Stokes:  Whatever one sees or experiences on the other side of the door, is believed by the initiated to be seen with the soul’s eye, to be experienced by the astral body.

… on the basis of what is possible at the moment.

Barnabas:  Is it possible by using I Ching to make contact with Quentin Collins?

Stokes:  Beyond the door… anything is possible.

And so, the revolution begins. Happy Chanukah.

Monday: The Most Important Thing About Quentin.

When the door with the hexagram opens, you can catch sight of the stagehand opening it, glimpsed through the crack in the door.

Monday: The Most Important Thing About Quentin.