“They become just as helpless as this pencil.”

Dr. Julia Hoffman comes home to her luxurious mansion, which belongs to other people. She’s brought a friend, a handsome young serial killer named Chris. They’ve just had an unpleasant afternoon with Chris’ ex-girlfriend, who was traumatized by Chris several years ago to such an extent that she no longer moves or speaks.

Chris is a little uneasy after the encounter, but Julia’s in full Murder Club mode, telling him that Sabrina still can’t speak, so she can’t identify him to the police. This is Julia’s idea of reassurance.

After Chris leaves, she’s joined by Professor Eliot Stokes, another dangerous houseguest who’s snapped his leash and is now wandering around at will, drinking other people’s liquor and planning unholy rituals in other people’s back gardens.

“I’m glad you’re here, Julia,” he smiles. “I’m going to exorcise the ghosts from this house tonight, and you are going to help me.” This is what Julia’s life is like, just one damn thing after another. 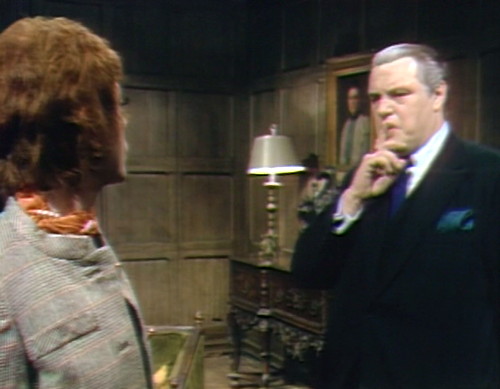 “Shall we go into the drawing room?” Stokes asks. “There’s less chance of our being overheard there.” Stokes has been specifically invited to Collinwood as a ghostbusting consultant, so I’m not sure which of the actual inhabitants of the house he’s trying to avoid. He can’t be hiding from the ghosts, because as everyone knows, ghosts are invisible and can basically be anywhere they feel like. Also, there’s no such thing as ghosts.

But ostentatiously keeping secrets is a key element of his act, which is part Sherlock Holmes and part P.T. Barnum. He’s a confidence man, really, and I have every confidence that he will improve the show immeasurably.

Although when you think about it, his track record is actually pretty bad. He tried to stop the Dream Curse, and failed. He called on the spirit of Reverend Trask to fight Cassandra, and it didn’t work. He called on the spirit of Phillipe Cordier to fight Danielle Roget, and it fizzled immediately. He brought Madame Janet Findley to Collinwood in order to exorcise the very same ghosts that he’s planning to re-exorcise today, and she fell all the way down the stairs and died.

So why do I think of Professor Stokes as a Dark Shadows rock star, if he never actually achieves anything that he says he’s going to do?

Well, to start with, Stokes is beloved by the gods, who invest him with ridiculous Sherlock Holmesian powers of writer-blessed foresight. Once Julia and the Professor step into the drawing room for a pre-ritual conference, Stokes stops suddenly, and walks over to the wall.

With cool assurance, he opens the secret panel, and says, “Good evening, David. I’ve been expecting you.”

Julia, stuck Watsoning again, gasps, “Professor, how did you know that he was there?”

Stokes replies, “This afternoon, I noticed that someone had been using the panel recently.” (There is no explanation for how you could possibly notice this.) “So I sprinkled some sugar between the foot of the stairway, and the panel itself. All I needed to hear was the crunch of one footstep. Now then, David. I think it’s time we had a talk.”

So that’s gorgeous, obviously. “The crunch of one footstep”! That’s what Professor Stokes brings to the table, every time.

As you can see, the entire post today is going to be about how great Stokes is. Here’s another example.

He sits David down on the couch, and asks, “David, do you know what possession is?”

David says, “It means to own something.”

“That’s right. And when you own something, you can do anything you like with it, can’t you?”

He pulls out a pencil, because the Professor never goes anywhere without a pocketful of metaphors. “For example, I own this pencil. I can do anything I like with it, because I possess it, and it does whatever I want it to. Suppose it no longer did what I demanded of it? I could discard it, and find a new one, or I might become angry, and decide to SNAP it in two, so that it would never be able to function again.”

Stokes chuckles. “Of course, no one would care very much, because a pencil isn’t a living thing anyway.” But then he frowns, and leans in. “Human beings are living things, David. If they allow themselves to become possessed, they become just as helpless as this pencil.”

Stokes hands the broken pencil to the child, and asks, “Do you understand that, David?”

“And you know that’s the cause of the fear that’s deep inside you? The fear you haven’t been able to express to anyone? Isn’t that right, David?”

“You have no reason to be afraid any longer. If you cooperate with me, I can help you.”

It’s amazing. Professor Stokes comes over, and becomes a pivotal part of the storyline just by hanging around the house, breaking pencils. 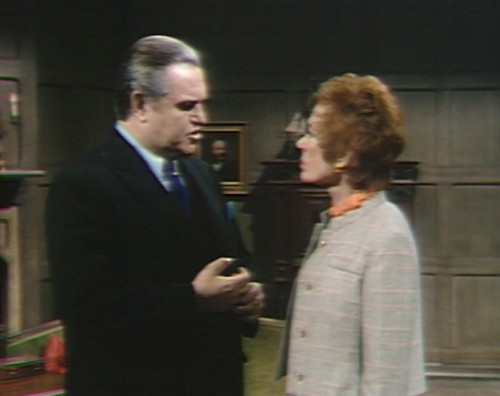 And he basically spends the next episode and a half giving everyone instructions, including the entire Collins family, past and present. He’s going to perform the exorcism outside on the terrace, and he tells Julia and Carolyn that they need to keep David in the drawing room, so that they can tell whether the ritual succeeds.

“If the spirit is forced to abandon him,” Stokes says, “you’ll notice a marked change in his behavior. It could manifest itself in any number of ways. If you observe no change… then we have failed.”

When all four of them gather in the drawing room, the spirit of Quentin Collins responds on cue, blowing the window open and playing his spectral gramophone tune. Quentin may be a vengeful poltergeist bent on killing the family, but he can’t resist a party invite.

With his opponent ready for battle, Stokes goes outside, picks up a stick and looks us straight in the eye. “Whoever you are,” he warns, “the time has come.”

This is followed by a huge thunder crash. It’s utterly fantastic. Meanwhile, on NBC, Gene Rayburn is asking Hugh Downs, “What is something you do at the same time every day?” 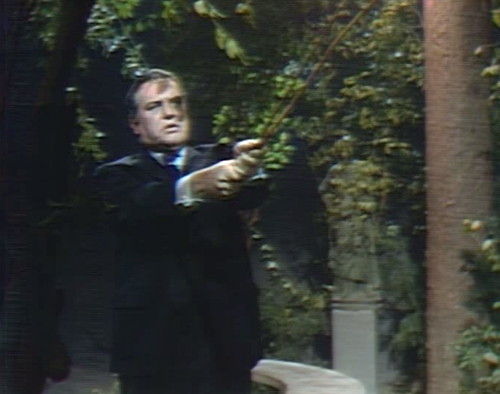 So then it goes pretty much as you’d expect, which means: absolute pandemonium.

As the gramophone plays and lightning flashes overhead, the Professor shakes his stick at the house, and yells, “I adjure thee, contemptuous and evil spirits, by the judge of the quick and the dead, by thy Maker and the Maker of all things, by Him who has the power to cast thee into Hell — depart in haste the confines of this house!” 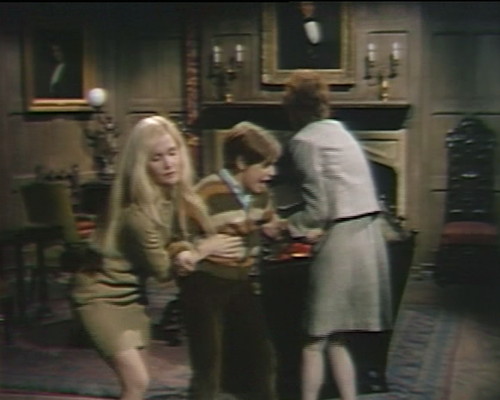 Inside, things are just as noisy. David leaps up from the couch and heads for the wide open spaces, screaming, “I’ve got to get out of here! He’s crazy! STOKES IS CRAZY! HE’LL KILL US ALL!”

Carolyn and Julia drag him back to the couch, and he snarls, “This is HIS house! Not yours! You can’t chase him away! You’ll be SORRY!” 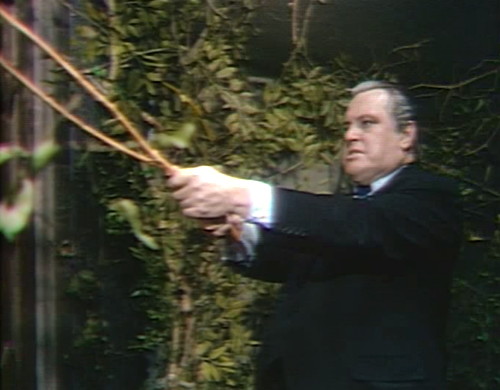 And it just goes on like that, for minutes — Stokes screaming about the darkness from whence thou came, David growling and snapping at his handlers, and that phantom melody, playing soft and low. 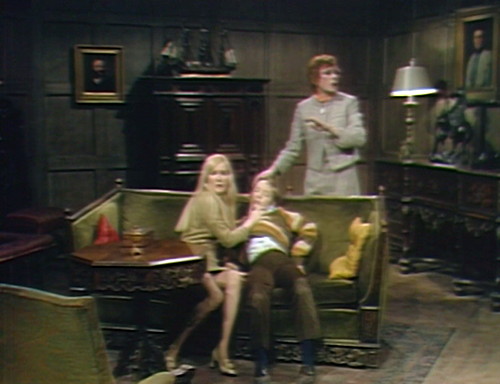 And then something terrible happens. They win.

David collapses. The lights come on. The music stops. Even the thunder clams up.

The ghost is gone. David is safe. The story is over.

Aw, don’t worry; Professor Stokes wouldn’t let us down like that. He knows that the very worst thing that could happen to this story is to let it end here.

You can’t close several months of story with a ten-minute one-sided shouting match. I mean, it was noisy and fun, and it made for a pleasant afternoon in front of the television, but it didn’t mean anything.

There was no risk, no real sacrifice — nothing that would leave a mark to prove that this really happened to these people. You can’t just announce that it’s over, with everyone still standing.

And so, to Stokes’ horror and the audience’s delight, Quentin appears in the mirror, and then the curtains catch on fire.

This is Professor Stokes’ great talent — the reason why we love him, and why everything that he does is a huge success.

He doesn’t stop the monsters, and we don’t want him to. Stokes comes into the story in order to escalate the problem, and he always delivers.

This isn’t the end of the story at all. This is the best part. This is when they burn the house down.

Reader Robert S. posted an explanation of the mirror effect on my Facebook page. Thanks, Robert!

“Chromakey was not used in this effect. It was what is called a “wipe.” On the video switcher, the technical director can fade/dissolve between cameras, or he/she can “wipe” between cameras. You can have horizontal, vertical, diagonal, circular, square and rectangular wipes.

“In the scene you’re asking about, a wipe was used to block out the regular reflection in the mirror. In its place was the shot of Quentin from another camera. Notice that Thayer David stands to one side of the mirror and has to be careful not to come too close to the mirror, or else his hand or shoulder would also be blocked out by the wipe.

“When Stokes smashes the mirror, the technical director quickly cuts out of the mixed effect/wipe back to the one camera showing Thayer David. (The curtains burning were clearly pre-recorded on tape and rolled in as the scene was being done.) This same wipe effect was used in the 1795 flashback, when Angelique made the portrait morph into an ugly old crone. “

As Stokes brings Julia into the drawing room, there’s a loud thump from the studio.

When Stokes hears the crunch of David’s footstep behind the secret panel, you can see the top of the drawing room set.

Julia tells Chris, “If you can’t stay for Carolyn’s stake, then you must stay for Amy’s sake.”

There’s a skip in the music when the scene first cuts to Stokes and his magic stick on the terrace, possibly indicating that there was a tape edit.

There’s an effect in today’s episode that I can’t figure out: Quentin appearing in the mirror. They’re using Chromakey, but as far as I can tell, the mirror isn’t blue. The image doesn’t quite match the size and angle of the mirror anyway. It’s just a rectangular image superimposed on the scene. Does anyone know how it’s done?