“But you don’t understand — he was more than a man! He’s something evil, sinister!”

There is a God of Fire and Rage.

Thousands of millions of burning spirits line the bone-charred stairs, kicking and scratching. Every unrepentant soul in Hell fights for the chance to return to the surface world, and drench the Earth in warm, rich blood.

It is here now. The children call it Quentin.

The angry ancestor advances on Maggie, gripping a curtain sash taut between his hands. He is going to choke the breath out of her body.

Behind him, the children shout their futile objections. “No, Quentin! You promised!” they say. “You said it was only a game! Please, Quentin! You don’t have to teach us a lesson! We’ll do anything you say from now on, honest! Oh, Quentin!”

As Maggie utters a terrible screech, Quentin gets distracted, and he actually turns around and glares at the squealing kids so they shut up.

This is what happens when your show gets this noisy. The murderous avenging refugee from the netherworld has to pause mid-murdering, to say For Christ’s sake will you two keep it down I’M TRYING TO MURDER SOMEBODY!

This week, the point of Dark Shadows is for writer Sam Hall to finally put his money where his mouth is, and write the biggest, craziest story that he can. He’s been telling the rest of the team for months that they need to stop sending the characters in circles just to help the audience keep up, and now he’s the guy in charge.

Dark Shadows has been a full-time spook show for a year and a half now, and it’s time for the characters to quit denying that ghosts exist. After this week, that will no longer be possible. The day of the goldfish character is drawing to a close.

But you have to build up to a plot point like that, so the next few days are all about earning the right to change the narrative status quo. They do that the best way they know how — with confusion and noise.

Maggie faints, and Elizabeth and Mrs. Johnson run into the study to find out what all the racket is about. The housekeeper catches a glimpse of Quentin just before he vanishes, and she makes sure that everyone within a five-mile radius knows about it.

Liz:  Mrs. Johnson, that’s impossible! We came in together! You’ve only been here five seconds! If there were a man, I would have seen him!

Mrs. Johnson:  But you don’t understand! He was more than a man! He was something evil, sinister! Mrs. Stoddard, if you don’t believe me — here! Ask the children! David, Amy! You must have seen him too! This time, you can’t deny it!

David:  We didn’t do anything! It wasn’t our fault!

Liz tells them to go upstairs, and David yells, “I don’t want to go to my room alone!”, and Mrs. Johnson yells, “I’m not going anywhere with that man about!” But Liz insists, and the housekeeper leads the shrieking children away, and at that point, Liz can attend to the unconscious governess obstructing traffic on the carpet. The whole episode is like this. 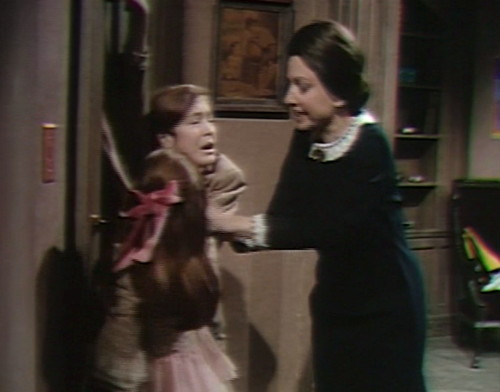 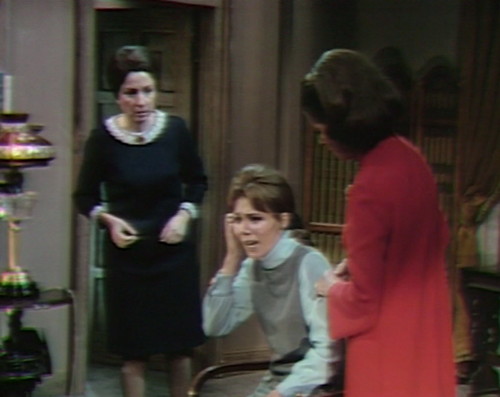 Downstairs, the conversation is proceeding along the same lines.

Liz:  Possessed by what?

Maggie:  By that MAN!

Mrs. Johnson:  There! Now do you believe me? There IS a man!

Maggie:  But he’s not REAL! Not a real man! Not really!

Liz:  Oh, Maggie, you’re not making any sense! Either there was a man, or there wasn’t one!

Maggie:  There WAS a man, Mrs. Stoddard! What I’m trying to say is that it was something evil, sinister! He was something not REAL!

So this is something you don’t see every day — three women standing around, failing the Bechdel test at the top of their lungs.

Things aren’t any calmer upstairs. Quentin appears again and waves his hand in front of Amy’s face, and she collapses onto the bed, holding her hands over her eyes and screaming that she’s blind now. 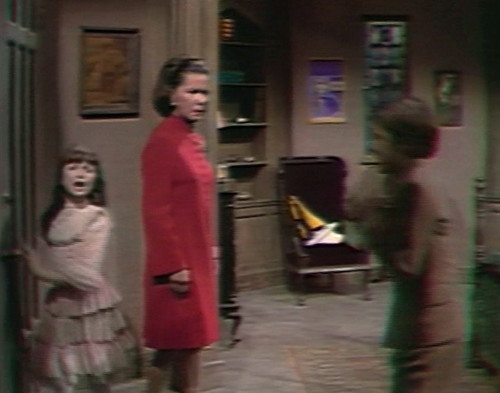 By the time Liz arrives, the kids are having a full-on panic attack, pacing back and forth and screaming like they’re picketing a union-busting restaurant.

David:  Oh, Quentin! We did what you wanted! Please, leave us ALONE!

Amy:  You’re making us hurt people and it isn’t FAIR!

Amy:  Just go AWAY, Quentin! It’s not NICE to hurt all these people!

Honestly, I could go on, but this is what the show is today, just half an hour of pandemonium. They’re basically taking this phase of the story to its chaotic conclusion, so they can shut this down and move on. Stay tuned for more shouting and fury and fire, as the forces of evil destroy this house and everyone in it, once and for all.

One of the cameras is still broken, as it was on Friday, and everything shot with that camera looks crooked. It’s actually a great example of early television, something that just would not be acceptable broadcast standard today.

Just before Maggie enters the study in act 3, somebody runs across the set, in front of the camera. There’s a lot of footsteps off-camera as she dials the phone.

The end credits are crooked. 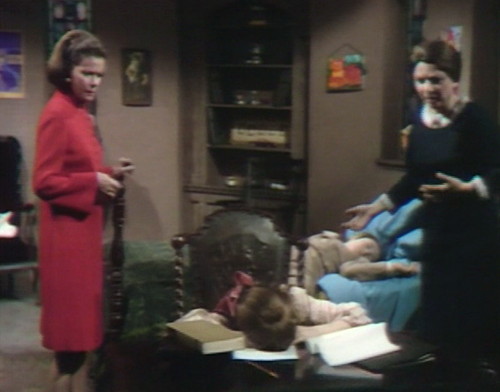