“Because that’s where the blood is.”

I’m out of the country this week — it’s one of those “He dropped out of school, alienated all of his friends, started going off to the mountains for weeks at a time” type situations. But if I leave you all alone, you’ll wander off to the west wing and start talking into broken telephones, so instead I’m going to leave you with selections from the February 1969 Paperback Library effort, Barnabas Collins In a Funny Vein.

My theory is that this is better than nothing. That theory is looking pretty shaky already. 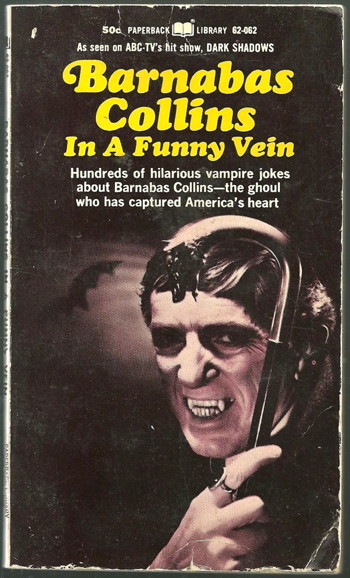 In yesterday’s post, we learned that Barnabas Collins is a real vampire who works in daytime television, which comes as a surprise to anyone with a functioning brainstem, but there you are. Today, I thought we’d just dive into the blood jokes, because there are a lot of them, and some of them actually make sense.

Does Barnabas have any sisters?
No, but he has some blood brothers.

What did Barnabas say when he saw the cannibal cooking one of his victims?
He said, “You make my blood boil.”

Was Barnabas in the service?
He was. He went in as a private and soon was promoted to corpuscle.

Why does Barnabas take Geritol?
Because he’s been drinking tired blood.

Does Barnabas like to take ocean trips?
Sure he does. He likes to travel on a blood vessel.

I mean, those aren’t the ones that make sense, obviously. But I’m pretty sure there are some. Let me see. 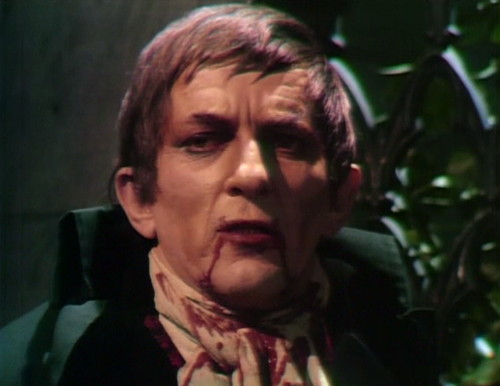 Okay, try these on for size.

Where does Barnabas sleep?
He sleeps on a blood cot.

Does Barnabas have any famous relatives?
Sure. He has some who are members of a royal family. One of them is a count — a blood count.

Where does Barnabas keep his digging tools?
In a bloodshed.

Does Barnabas like nuisances?
Yes, he does. Especially if they are bloody nuisances.

Why does Barnabas drink blood mixed with carrot juice?
So he can see better at night.

What do you call two pounds of blood?
Killogram.

Why did Barnabas become a vampire?
He didn’t want to flunk his blood test.

Is Barnabas’ business doing well?
No, because he’s always in the red.

You might say that when Barnabas gets excited, instead of the blood rushing to his head, his head rushes to your blood.

What kind of pet did Barnabas get to keep his wolfhound company?
He got a bloodhound.

I went on the Drinking Man’s diet and didn’t drink anything except the blood of drunks.

Barnabas isn’t political; he talks favorably about Red China. He likes dishes and can’t get the blood off his.

Some say blood is thicker than water. I’ll drink to that.

Does Barnabas like girls with red cheeks?
Only if they are blood red.

In a Funny Vein has a particular obsession with the concept of blood banks.

I’ve only been in serious trouble once. I was caught robbing a blood bank.

Do you know how Barnabas will finally get caught?
He’ll be overdrawn at the blood bank.

Did you hear about Barnabas going to the blood bank and asking them how much blood they had?

What did Barnabas want to be when he was a boy?
He always dreamed of becoming treasurer of a blood bank.

Why did Barnabas return to the blood bank on July 15?
He said he had made some deposits and wanted to collect his interest.

Why does Barnabas always rob blood banks?
Because that’s where the blood is.

What is Barnabas promoting with American Express?
He wants them to issue credit cards for blood banks.

How did Barnabas get thrown out of the blood bank?
He demanded that they give him self-service and bit the nurses.

Okay, a few more, just to tide you over until tomorrow.

What did Barnabas say when he couldn’t figure out what type blood to drink?
He said it was all very transfusing.

Flash! Barnabas has the answer to stopping riots. He says all you have to do is give rioters transfusions of tired blood.

Is Barnabas patriotic?
He sure is. He wishes everyone were a red-blooded American.

What country in Central America does Barnabas like to visit?
Veinezuela.

Does Barnabas ever fish?
He sure does. He likes to fish in a blood stream.

What book is Barnabas reading?
In Cold Blood. But he always reads in cold blood.

What happened when Barnabas was on the operating table and he called over to a doctor and asked for a transfusion?
The doctor wouldn’t give it to him. He said it wasn’t his table.

Why does Barnabas always lose so much money when he plays roulette?
He can’t stop himself from betting on the red.

Because he’s a vampire, and he drinks blood. That’s why it’s funny. Do you see?

Tomorrow: What Does Barnabas Use in His Coffee?

12 thoughts on “X2: Why Did Barnabas Become a Vampire?”