“You know how girls are, they’re always having dizzy spells.”

Carolyn’s heading out for a moonlight stroll over to her mother’s private mausoleum. Elizabeth died three weeks ago, but Carolyn insists on paying regular visits to the crypt, just for old times’ sake.

Before she clocked out, Liz was convinced that she would be buried alive — everyone would think she was dead, but she’d really be lying in a comatose state, trapped in a coffin and unable to call for help. So she built herself a state-of-the-art mausoleum, complete with a push-button at her fingertips that she could press if she suddenly got better.

So Carolyn goes to visit every day, wondering if her mother will ever revive. Maggie tells her that it would be better if she could just accept her mother’s death, but Carolyn says that she still keeps hoping.

Maggie finally blurts out, “It’s not possible for someone to come back from the dead,” except on Dark Shadows, of course, where they never do anything else. 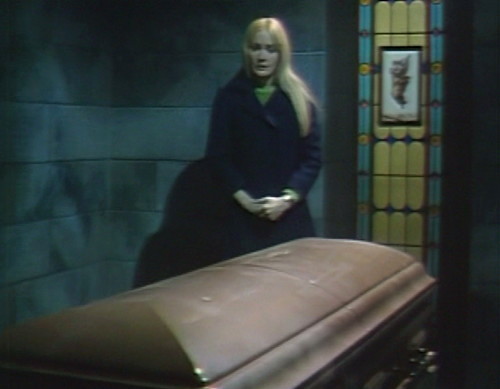 So here’s one of those unexamined assumptions that I never really understood: Why do dead people know everything?

I mean, you’d think they would be the last people to keep up with current events. But the dead are always issuing cryptic warnings about the future, and they know everybody’s secrets. They even know what Christmas dinner is like over at Bob Cratchit’s place, which they’re happy to share with you in some detail.

It feels like a guy could be a grade-Z lamebrain his whole life, and then he catches a lucky break and dies, and all of a sudden he’s at one with the wisdom of the ages. I’m sorry, but I don’t think that’s plausible.

For example, here’s Elizabeth Collins Stoddard (deceased), down but not out. She’s spent the last three weeks lying flat on her back, with a streak of light shining right across her eyes, which can’t be doing anything helpful as far as resting in peace is concerned.

But she’s not only aware that her daughter is quietly sniffling near the coffin, she also knows that Carolyn’s boyfriend is about to turn into a werewolf and go hunting for blondes.

“I am alive, Carolyn,” Liz thinks furiously. “I try to speak, but I can’t! I must find some way to tell you — you are in terrible danger!”

So I don’t know what’s going on there. Before she went down for a power nap, Liz didn’t know that Chris was a werewolf, but apparently being mostly dead gives you backstage access. As always, the medium is the message.

But let’s check in with Chris the boy werewolf, who doesn’t have a plan for like the millionth full moon in a row.

I honestly don’t know why it seems to bother me so much that Chris is always caught unaware, even though he has the most manageable supernatural affliction that you could hope for, arriving exactly on schedule at easily predictable intervals.

But the audience wants as much werewolf action as we can get, and responsible time management is not a heart-stopper. I know this. And yet I keep yelling at the screen, dude, get a Day Runner. 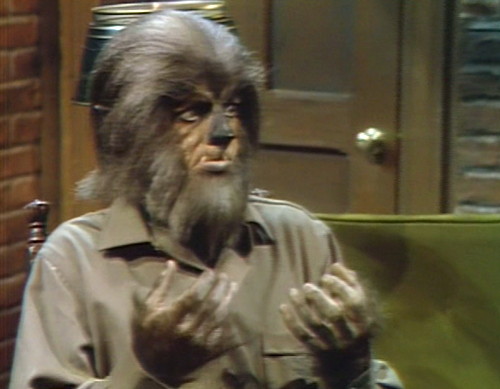 Anyway, it all works out okay, in the sense that he turns into a snarling beast, and then engages in the silliest post-transformation werewolf routine this side of the Groovie Goolies.

He looks down at his hands, and acts startled, like he’s thinking, hang on, these look like werewolf hands, well I never, this is absolutely the frozen limit. 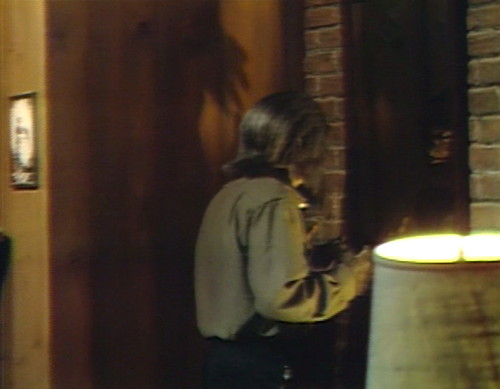 And then he walks calmly over to the mirror to assess the damage.

It’s not until he gives himself a once-over in the mirror that he starts acting crazy and smacking light fixtures across the room. There is every indication that if Chris didn’t have a mirror hanging on the wall, then the werewolf would just sit quietly on the couch and think things over.

Things get a little hectic for the housewares, and then the savage werewolf uses the doorknob and lets himself out for a walk.

This mirror-and-doorknob routine just makes me smile like a little kid at Christmas. Oh, ridiculous Dark Shadows werewolf, I wll love you until the day that I die.

At this point, the episode takes a turn for the worse, because we have to watch David and Amy’s incomprehensible possession plot.

The kids are currently being mind-controlled by their angry ancestor Quentin Collins, who’s dead and therefore has his finger on the pulse of everything happening on the estate, just like Liz and apparently every other dead person in the immediate area.

Quentin’s been trying to arrange things so that Carolyn goes over to Chris’ cottage at moonrise, although how Quentin knows Chris’ schedule in advance is one of those mysteries we were talking about earlier. Dead people must have an email newsletter or something; they’re very well-informed. 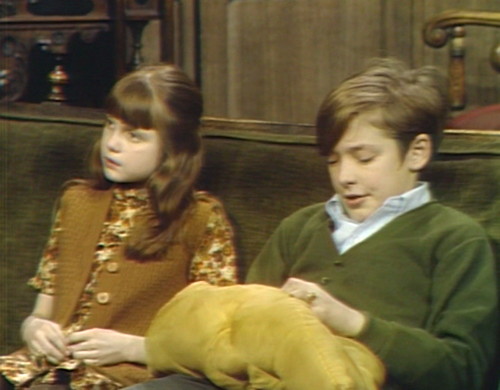 The part that confuses me is that Quentin has been using the children to terrorize the residents of Collinwood, driving them all mad with anxiety. But then the kids keep sabotaging their own plan at every turn.

Check out this interaction with their governess, Maggie:

Maggie:  There have been so many strange things that have been happening lately, like Mrs. Johnson’s experience at the cottage.

David:  You don’t really believe that she saw some strange man there.

David:  I think she was just imagining it. Mrs. Johnson’s always been jumpy like that. Besides, there wasn’t any strange man when we got there, was there?

Maggie:  No, but he could have gotten out the back way.

David:  Then how come nobody’s seen him since?

It’s like they’re slow-motion reverse-gaslighting Mrs. Johnson, showing her a real ghost and then reassuring other people that everything is okay. Children, your plan makes no sense to me, and I refuse to be entertained by it. Take that.

Meanwhile, Carolyn spends most of the episode walking back and forth through the woods, because there’s a monster there and we need to give him somebody to play with.

As she’s walking, she suddenly hears her mother calling to her, breaking all known laws of physics, causality and common sense. “Carolyn!” Liz cries. “You must hear me! You are in danger!”

Again, not sure how Liz is keeping tabs on this developing situation. Apparently she has GPS on everybody involved. So everyone is psychic now, and they all have Spidey-sense, and if that’s Dark Shadows’ current approach to soap opera information management, then that’s how the show runs at this point.

Then we cut to the werewolf, who’s sort of prowling aimlessly through the woods, and suddenly the episode ends.

At the start of the show, Nancy Barrett’s voice has reverb behind it for the first few words of the introduction. The reverb fades by the end of the first sentence.

Maggie changed clothes over the weekend. The teaser in today’s episode repeats the final scene of Friday’s episode, but now Maggie is wearing a scarf, and her hair is tied back.

In act 1, when Maggie closes the front door at Collinwood, someone in the studio has a coughing fit. There’s another loud cough in act 3, when Carolyn puts on her coat. There’s been a lot of this lately. It’s January in New York City; I guess there’s a cold going around.

As the transformation happens, Chris postitions himself to stare directly at the camera, so they can line up the werewolf face. As the werewolf fades in, it’s obvious that the eyes aren’t lined up. They quickly move the camera to get the two shots in synch.

Chris’ shirt is more open at the neck when he’s human than it is when he’s a werewolf; the transformation buttons up one button. Not that I spend all my time paying attention to how open people’s shirts are.

The first time that we see “dead” Liz in the coffin, her eyelids move.

I fixed this in the quote above for clarity, but what David actually says is, “I think she was just imagining it. Mrs. Johnson’s been always jumpy like that.”

David tells Amy, “You couldn’t go by — the front way, because you would pass my room.” 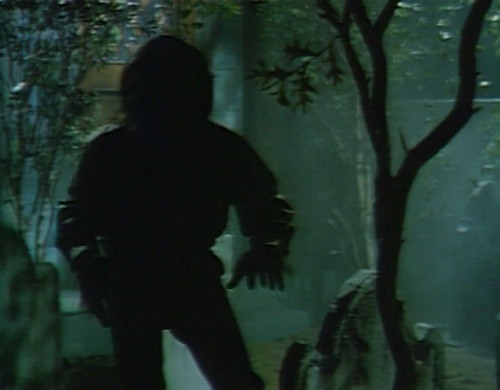