“I had forgotten how overwhelming this urge for blood could be, and how helpless I would be to resist it.”

Last year, Dark Shadows took a bold leap, spending four months in a detailed flashback to the 18th century. This risky endeavor turned out to be a huge win, a creative high point for the series.

When the time travel story ended in April, the question was: after an ambitious and successful storyline like that, what do you do for an encore? And then they spent the rest of the year not really coming up with a coherent answer to that question.

Instead, they stumbled their way into a set of tangled story threads involving a mad doctor, a Frankenstein monster, a time-traveling witch with dream powers, a demonic crime boss, an occult expert, a root cellar, two new vampires, multiple kidnappings, a brick wall, an anagram, the French Revolution, Elizabeth Barrett Browning, Jim Morrison and a View-Master reel.

It’s not easy to tie that all up and have it make sense, so they didn’t bother. They just threw a werewolf at us, which kept us entertained while they quietly directed the surplus characters to the exit.

But now the production team is doing a bit of soul-searching, trying to figure out where it all went wrong. And since there are clearly no rules about what qualifies as acceptable afternoon programming anymore, they might as well take us along on their annual review.

This week, they’re doing it all over again. Dark Shadows is going back to going back in time. 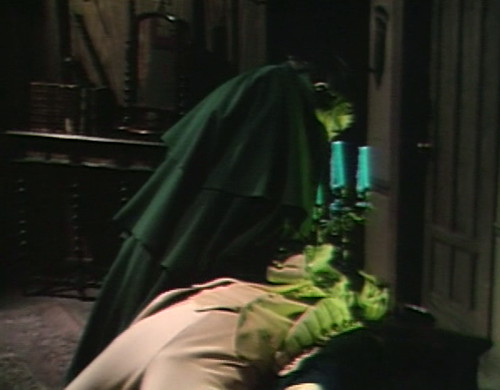 So here’s our hero, the occasionally reformed vampire Barnabas Collins, who’s magically returned to 1796, to take possession of his own body. This is a great idea, and I plan to try it the next time I get pulled over for a speeding ticket. “If you’ll just wait a moment, officer,” I will say, “I’m about to transcend the barrier of space and time.”

Barnabas is here to save girl governess Victoria Winters, who’s currently under sentence of death on trumped-up witchcraft charges. He tried to do this the first time around, too, but maybe this time he won’t screw it up by murdering key witnesses.

At the moment, he’s got his hands around the throat of Lieutenant Nathan Forbes, and they’re grappling next to a stage light with a green filter, which accentuates the heroism. 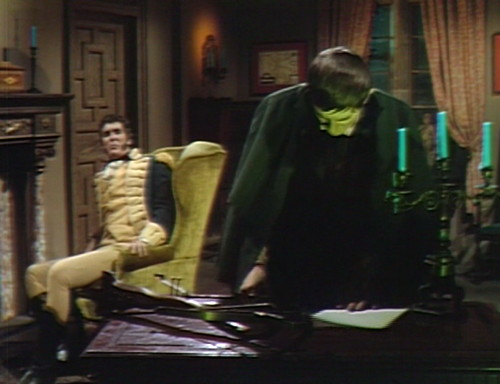 Here’s where Barnabas really knuckles down to the task of recklessly clearcutting his own history.

The first time around, he just murdered Nathan and moved on with his evening, but now he’s decided that everyone would be much happier if Nathan signed a confession clearing Vicki and her lawyer boyfriend. So he takes some paper and ink from a desk, moving aside the loaded crossbow. It’s been a weird evening.

Remarkably, Nathan thinks is a good time to open up negotiations, saying that he’ll write a full confession, as long as Barnabas does the same. “You won’t kill me, if you want Peter and Vicki to live,” he insists. “So you see, I have some weapons of my own.”

This is why Nathan was such a great character; I admire anyone who can transition seamlessly from gasping for breath to making a sales pitch. Then he walks over to a nearby mirror, and adjusts the apparel. God, I miss Nathan. 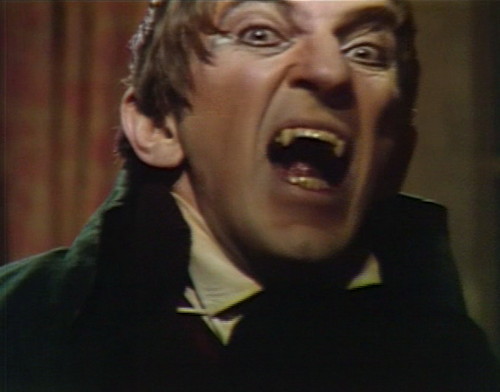 Barnabas smiles like the cat en route to eating the canary. “Apparently, you are unaware of the powers that I have,” he purrs. “You think the only choice open to me is to kill you. Well, you are a pathetic fool.” Then he makes with the dentistry.

And, you know, this is how far this character has drifted from his original remit — I’d totally forgotten he could do this. I guess fantasy rape-based mind control is back on the table as a strategy.

This needs to be the first item on the production team’s list of how to make the show great again: stop curing Barnabas. He is so much better as a vampire.

So do you remember how Dark Shadows fans think that the writers had this long-term “redemption of Barnabas Collins” character arc planned out, where they guide him to maturity and turn him into a hero? Yeah, about that. It didn’t work.

Cause here he is, back in town, and doing it all over again. According to the make-believe redemption narrative, Barnabas should have evolved by now into a civilized adult who has some basic grasp of the sanctity of human life.

This is the kindly uncle, who’s spent time with Julia, Vicki and Carolyn, and now understands that raping someone’s jugular is not an acceptable means of building consensus.

But there’s really not a lot of daylight between episode 663 Barnabas and episode 363 Barnabas. He’s still strangling his way to the top, and he still enjoys it; he just has a slightly different agenda. In the last year and a half, Barnabas Collins has learned nothing of consequence. 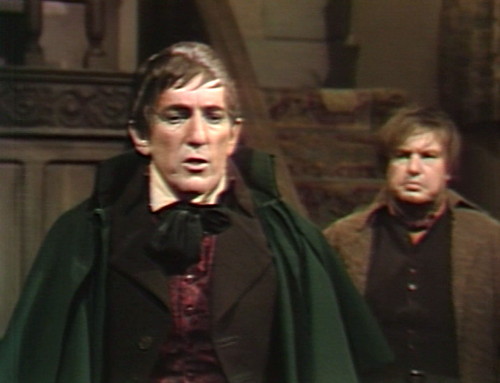 And, just to drive that point home, he drops Nathan off at the police station, and heads down to the docks for a snack.

A little later in the episode, Barnabas tells Ben, “I didn’t think what it would be like, being this way again.” He sighs. “I had forgotten how overwhelming this urge for blood could be, and how helpless I would be to resist it.”

I’m sure that the woman he’s about to murder would find that comforting; he should make sure to mention it during the assault. You can’t blame a guy for not thinking what it would be like.

So here we are: EXT: DOCKS – NIGHT. Enter doomed prostitute, in a red shirt.

Now, according to the boring old rules of story logic, this scene has nothing to do with the rest of the week-long time trip. Barnabas is trying to bust Vicki out of stir, and he’s just dropped the dazed Lieutenant and his confession off at the police station. Now he needs to make sure that Vicki is released, so it’s not a great time to wander off and meet new people.

But Vicki is obviously not the focus of this whole time travel sequence. If they thought we cared about Vicki, they would have pointed a camera in her direction.

Honestly, this scene is one of the most blatant examples of audience pandering you could hope for. The ratings are down slightly, so the production team responds in the only way they know how, namely: send the protagonist out to kill people with his teeth.

For commentary, let’s skip ahead a few chapters on the DVD, and hear what Jonathan Frid has to say.

On this disc’s bonus-feature interview, Frid describes his first bite scene with Maggie back in episode 225/226, when he put his fangs in upside down, and he had to just keep his mouth shut and go on with the scene.

“So it turned out to be the best bite I ever did, by the way, because I couldn’t open my mouth in this idiotic fashion that they always asked me to do, like (opens his mouth wide) into the camera, as if they want to show off the fact that they’d spent a hundred dollars on a pair of dentures. I mean, it was just silly. But I’d go (opens wide again) and then I’d go in, and, you know, they could’ve called the cops and saved the poor damsel, by the time I got to her neck.

“I mean, the long dentures — they looked funny to me, they don’t look horrible at all. But, if you could suggest it, the power of suggestion is what I’m into, my whole career.” 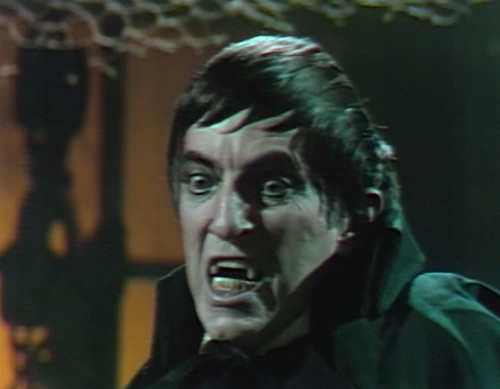 Frid is basically talking about this episode. It’s been nine months since we last saw the inside of the main character’s mouth, so they make sure we get a good look. Barnabas swoops in for a bite, then rears up for a second try. 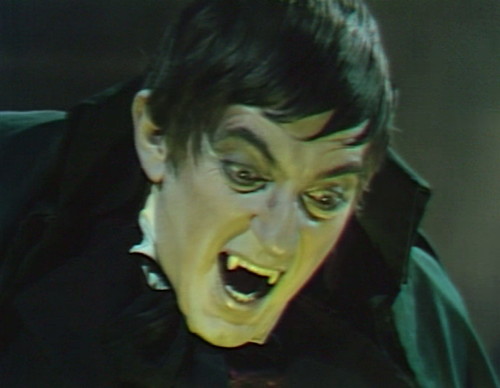 Barnabas actually has his mouth open for twenty-six consecutive seconds in this scene. If this is what the housewives and teenagers want to see, then today they get the deluxe experience.

But that’s not the only treat for the audience today. We also get to see crazy, crazy Millicent, still following Nathan around and having not really that much of a clue about what’s going on.

I loved Millicent the first time around, but now I can see how important she was — a core family member making an exaggerated descent into madness.

And here’s Nathan, the clear and present danger to the fortunes and destinies of the Collins family — scoundrel, thief, bigamist, child-endangerer, recent life-essence rape victim — doing a comedy scene with his comedy wife.

He’s shaken off the effects of Barnabas’ hypnocontrol, and he’s trying to get Millicent to understand the first thing about what he needs her to do. Just look at his frustrated little face, it’s adorable. We haven’t had this particular brand of drawing-room farce since the 18th century.

This is another reminder of an approach that they discovered in 1795, and then misplaced. We need more of this kind of thing, and lucky us, this is the week when the writers figure that out.

In fact, I think this is the place where they start to say, “Maybe we could do another time travel story.” They’re kind of openly displaying that they long for this version of the show, and this week is a chance to review what went right a year ago:

A limited time travel story, where anything can happen. Exaggerated characters, who can offer a wider range of dramatic styles. Conflicts between family members, with the future of the Collins family at stake.

Make Barnabas a vampire again, but this time he’s saving innocents, making friends and fighting villains. Give him an active goal to fight for, so he’s not just sitting on the sidelines and reacting.

That’s pretty much the recipe for the 1897 storyline, which kicks off in March ’69. I was arguing a month ago that the writers were still making things up as they went along, and the Turn of the Screw storyline was not originally designed to be a lead-up to another time trip. I think this is the moment where they actually make that decision.

Ron Sproat, the lame duck of the writing team, is going to write the next five episodes, which are basically just a retread of old ideas. While he’s keeping the show going, Dan, Sam and Gordon can spend that time figuring out where they’re going next.

Today’s episode isn’t just a look back at the past. This is the roadmap to the future of Dark Shadows.

When Barnabas terrorizes Nathan in the teaser, three candles in a candelabrum blow out — except the middle one, which stays lit.

Barnabas tells Nathan, “I think you would rather be staying in a prison than dying in this room.”

Nathan says, “Come now, Barnabas. My sins look rather pale besides yours.” He means “beside yours.”

When Barnabas tells Ben that Nathan has signed the confession, a scene-closing music cue starts playing, and then cuts off. The scene continues.

When Crystal asks Barnabas, “Do you ever go to the Eagle?”, somebody in the studio coughs.

In the final moments, the camera holds tight on Barnabas’ face, so that he can sit down without revealing Crystal’s body is in the other chair. But as he sits, her face can be seen briefly anyway.